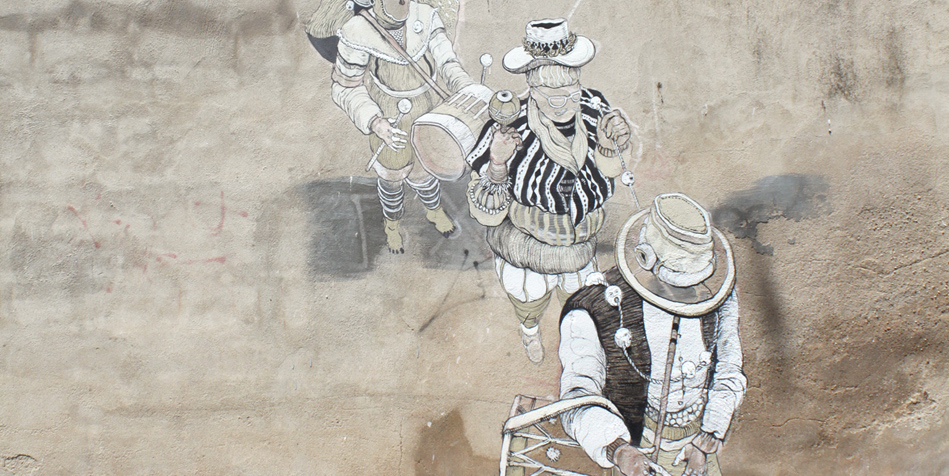 Interview with SAN, one of the most internationally well-known (graphic) artists from Spain. This time like the organizer of INSITU FESTIVAL in Miajadas (Caceres/ Spain) from June 28th to July 4th, with the collaboration of friends and colleagues like Escif, Herbert Baglione, Honet, Nano4814, Sam3, Spok and the XLF crew.

In his artits´s side he told us: “I´m currently working seriously on what will be the only individual exposition of this year in The Don Gallery (Milan) in November. An exposition of just drawings, no paintings. I’m doing large format drawings with quill and ink, and India tint. It’s all a pseudo-masochistic adventure…”. Knowing perfectly how it is his creative process we can imagine… We´ll keep you posted.

San, INSITU is your first personal project as a promoter/organizer?

It is, in fact; although the first thing I organized was an exhibition in the summer of 1996, with 20,000 pesetas (like 120 euros/ 150 dollars) in Morales (my hometown), all to buy paint and to pay for one trip or another. There’s still a piece from Sunsak up (though it’s very worn-out), who was the guest of honor. 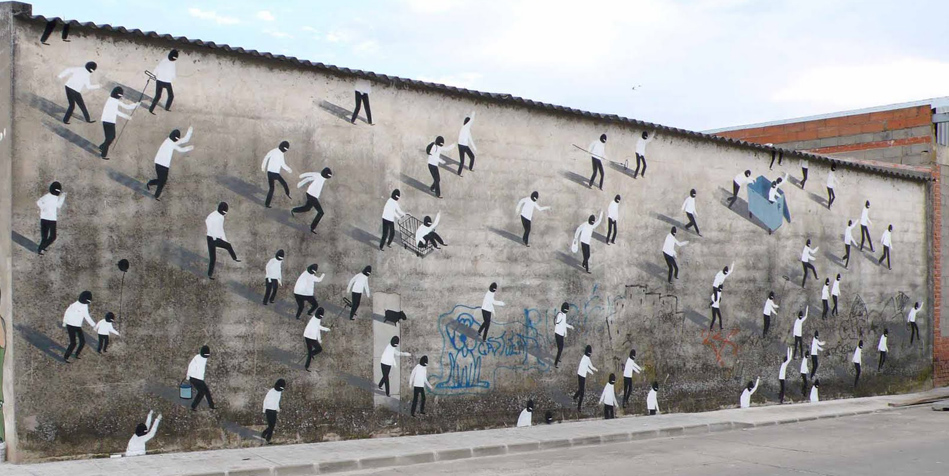 Though you’ve also participated as an artist, what feelings do you have about being behind the scenes?

Well, the truth is that even though it was a small event, problems and unexpected things always arise which make it impossible to paint with concentration. I’ve learned a lot about the diversity of the attitudes and aptitudes of people, of the artists as much as the organizers. All of them were exceptional, and they really helped me carry the load; I’m a very committed person, which can sometimes play tricks with you.
I’ve spent years participating in events, and I could definitely fathom the responsibility behind them, but it’s without a doubt something which you have to live to really understand what it’s like being amongst it all. You always have to find an objective balance with your work, and without a doubt the result will be positive. They say that these types of responsibilities are addictive… 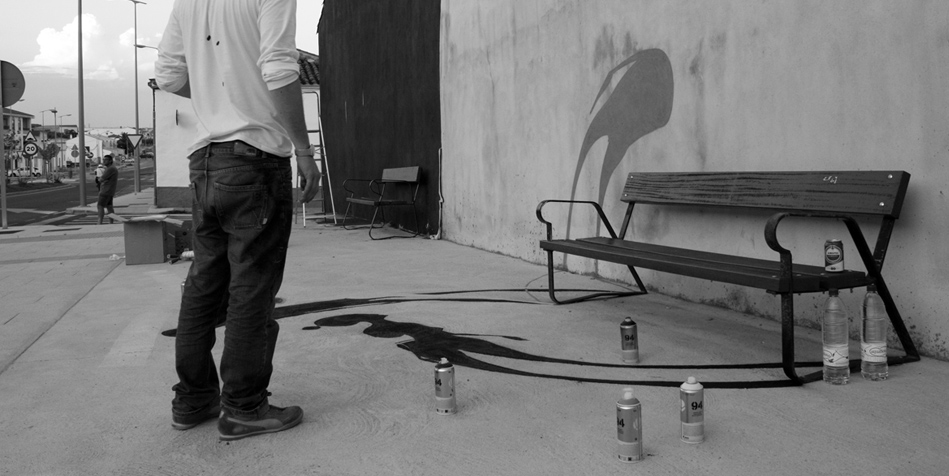 It really seems to have been a very personal project, not just because of the choice of collaborating artists, many of them long time friends, but also because of the location…

I think that this type of project should be taken as something personal for those that make it possible. Miajadas is a small town, I have friends there from way back. They put me in charge of doing something, and I decided to bring together people that I admire. Some are very good friends, others less so, but even so, I didn’t want to do a ‘friends’ event, without knowing the quality of the artists. It’s clear that none of these men need presenting, the quality of their work speaks for themselves. 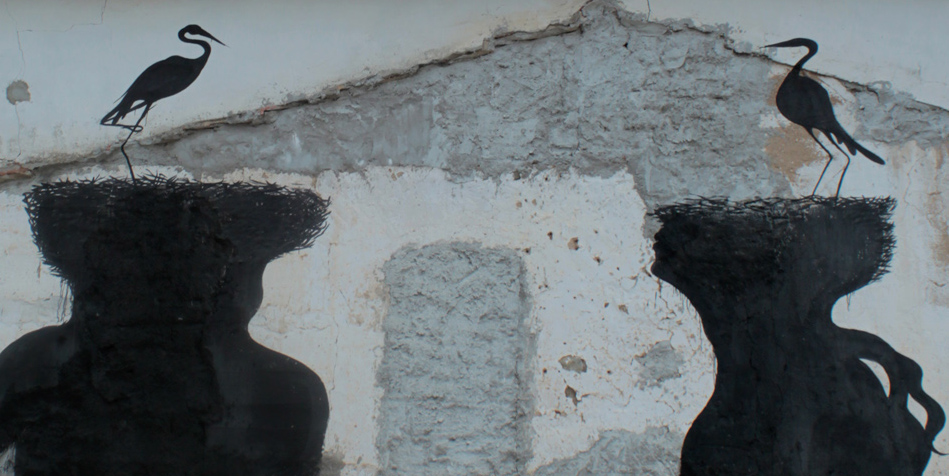 Were there conversations with each of the participants before the event, or was it more freestyle in both the execution of the pieces as well as the choice of the walls?

At first there was clear planning of the project. The selection was in accordance with my initial idea; to bring together artists that worked with NARRATION, unlike the overall trend which is often found in aesthetics, which offers nothing more than that. There are lots of people doing very interesting things, who don’t become celebrities that do nothing more than chew gum and repeat the same old joke.
In this first edition, I wanted to spin the project around people who narrate things in their works, through imagination, with very different language, but with a common background and experience. Some previously planned their project, and others decided not to. Either way, everyone did a great job, and I’m really happy with the result. There were some premeditated things, and some non premeditated things. For example, I knew we’d have the building that Honet painted from the start. It’s an abandoned club from the mid-90s, from the ‘bakalaera’ (techno) era. I told him about it cos I knew it’d interest him, and actually he didn’t doubt it for one second. 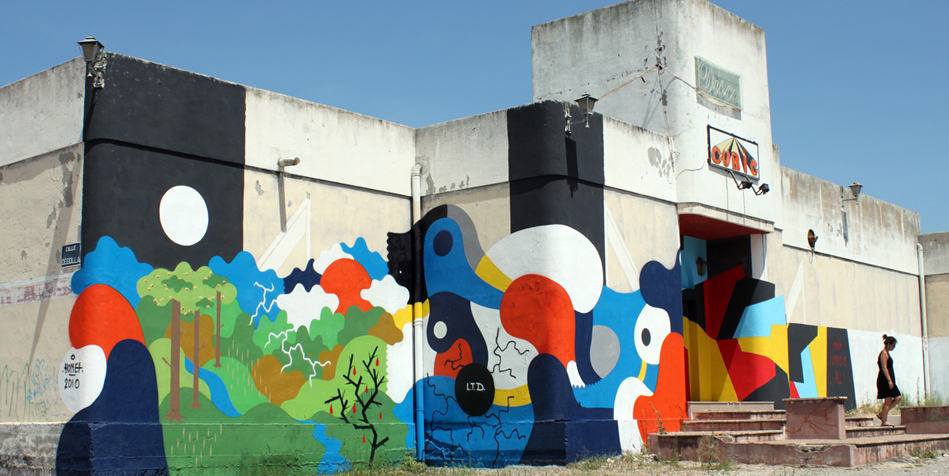 How did things go with the locals during the creation process? And when did they see the final result?

Really well; the entire town bent over backwards to make all the artists feel welcome, there was just a really good vibe in general. It was mainly the young people who offered to help out in any way they could, they were totally involved. Ask Herbert what he thought of everyone passing by his wall, offering him drinks, food, and other substances… he was amazed. 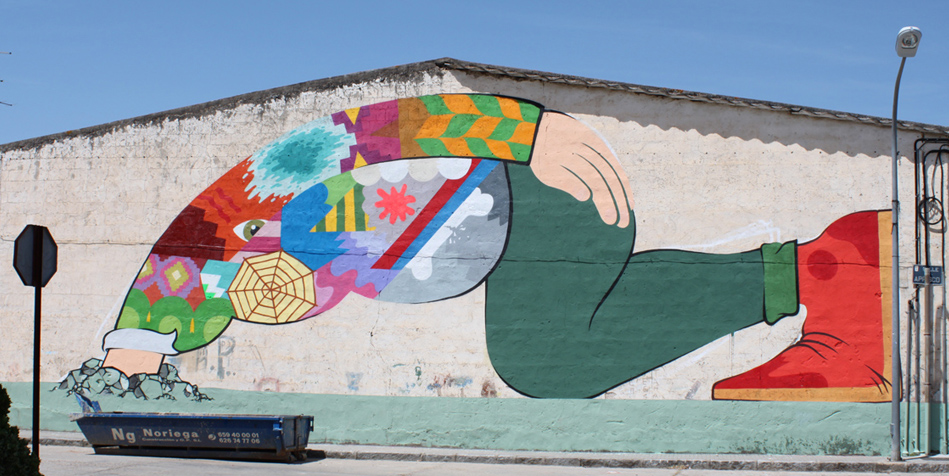 Tell us a bit about how it was day to day.

Same as always: the early-risers vs. the sleepers. Painting had to start early in the morning, and stop in the afternoon, because of the heavy heat. Miajadas is in one of the driest parts of Extremadura, as opposed to my town with is totally green (haha). It took us a while to get going, but in the end people organized themselves to get working. We ate in an incredible place in front of a local swimming pool where you could chill out for a bit after the food. There were days that we went swimming in an irrigated canal which had a strong current which we had to deal with to be able to go swimming (laughs). It was in the afternoon that people finished off their work, and after painting, plenty of beer was drank, lots of it, at the pace of the locals, which is no small feat. 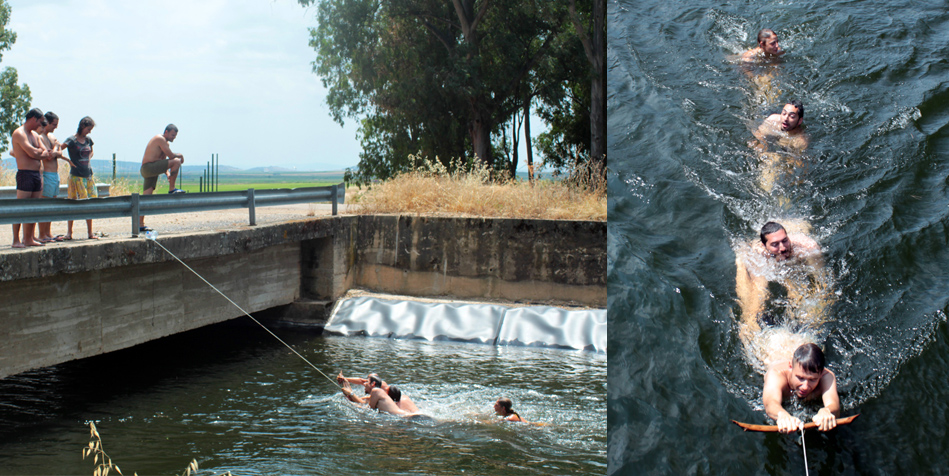 The fact that it was a festival, but one without public pressure, must have helped each of you be able to concentrate better while working. You can almost feel the silence in the photos which you sent us… apart from maybe just a dog barking…

That was the idea, that everyone would be relaxed, and just enjoy painting without any pressure, with no more of the public around than the amount normally on the street. Really, massive graffiti exhibitions more and more have less and less meaning for me.
My main objective was to leave great pieces in the town, the rest doesn’t matter so much to me. In fact, we didn’t even want to tell anybody, not even the institutions from Extremadura or the press or anything.
The approach we had was to unite a group of artists in a nice setting for working, and nothing more. And I’m proud to have been able to do it without needing any financial help outside of the town, apart from sponsored materials. We didn’t ask for any money from anybody. That way it was true to what we wanted; an event with tranquility and quality, above all else. 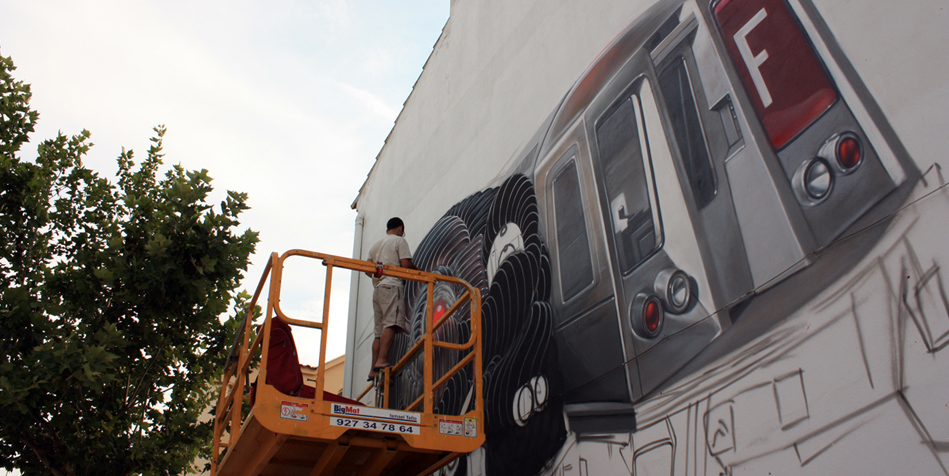 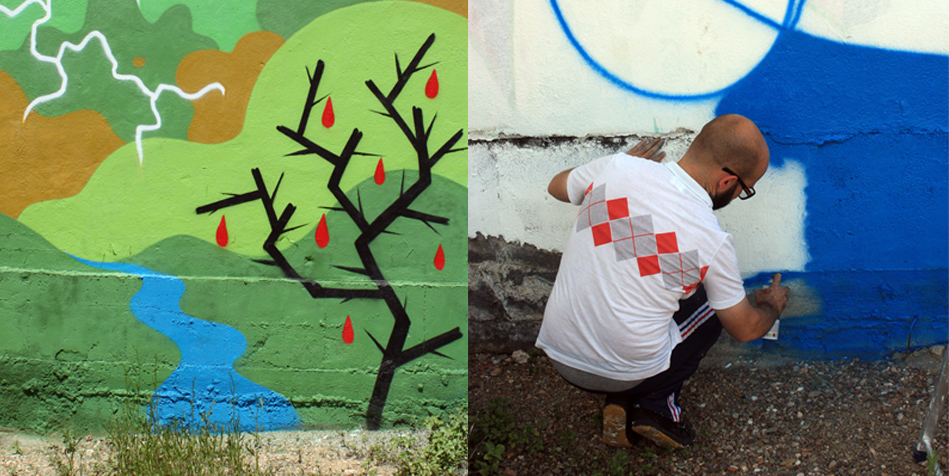 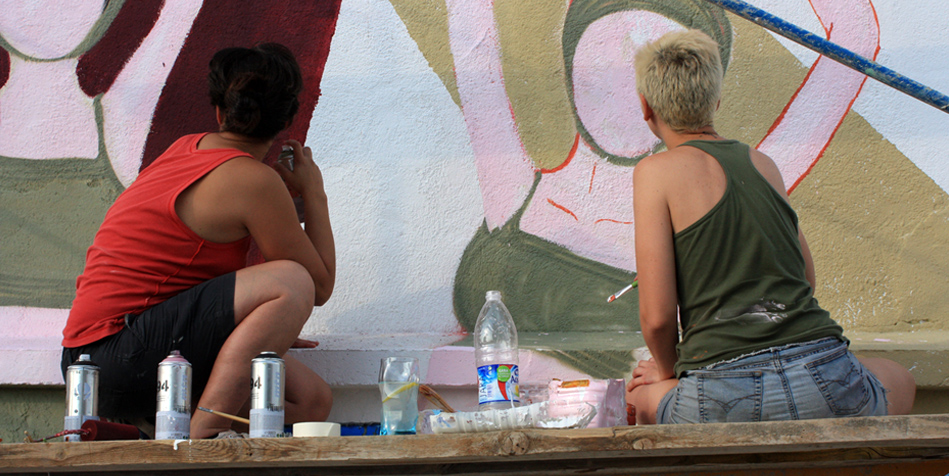 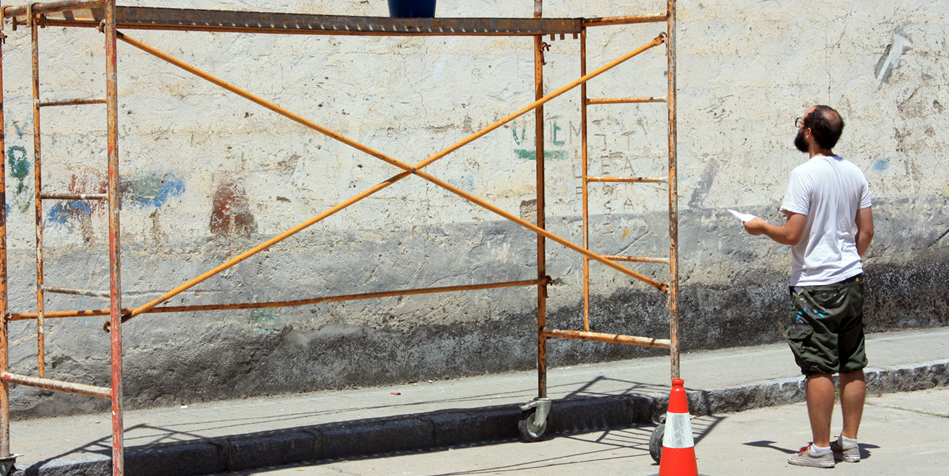 And what about the project participants; what taste was left in their mouths after participating in INSITU?

Everyone had a great time and were happy with their works. I think that the treatment they received from the organization was polite and respectful, so I don’t think they suffered, apart from with their war with the Caceres sun. 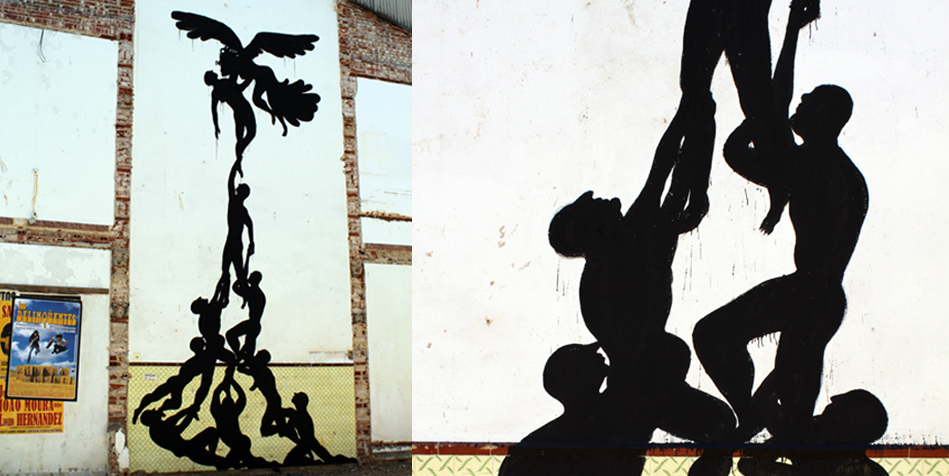 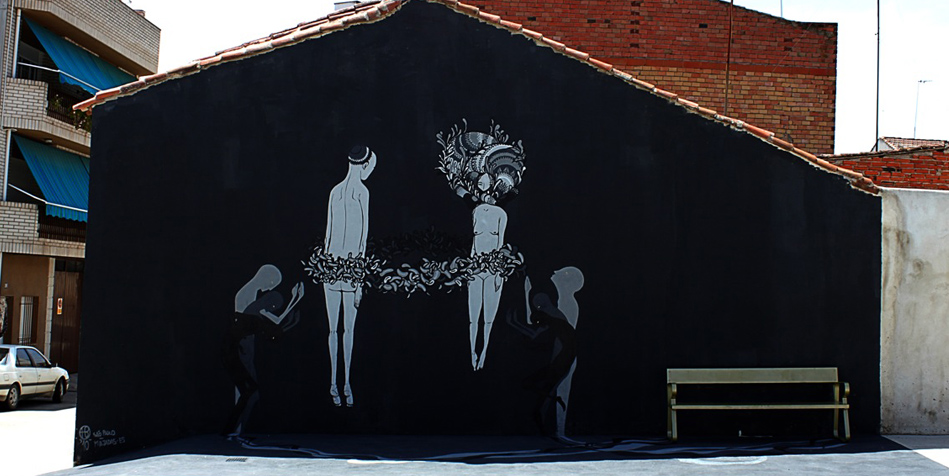 Did the fact that the pieces were done on the walls of a town, and not in a city, change the message of some of the participants?

It’s relative; maybe some of the pieces make reference to the place, such as one of the pieces by Sam3: “a couple with a pair of storks in their mental nest”. Throughout the whole town you could hear the sound of the calls of the storks, its full of them. Honet also referenced the building which he painted in his landscape; the entrance door. Herbert used the benches in a special way, he spoke to a man who sat there all day, and explained his ideas to him; and then he finally painted the bench gold. Spok did a New York subway car; the fact that he did it in a small Caceres town made it all the better.
My pieces also give a wink to Extremadura folklore…but as for everyone else, I think that each person did what they wanted in that moment. 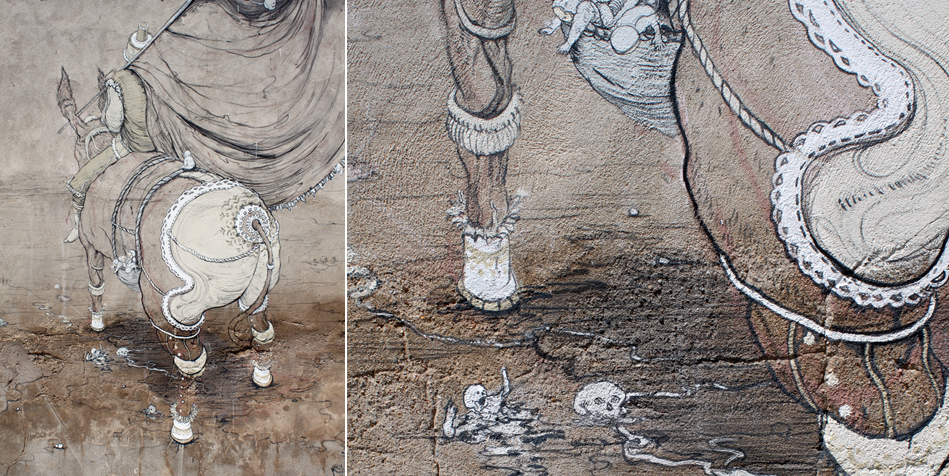 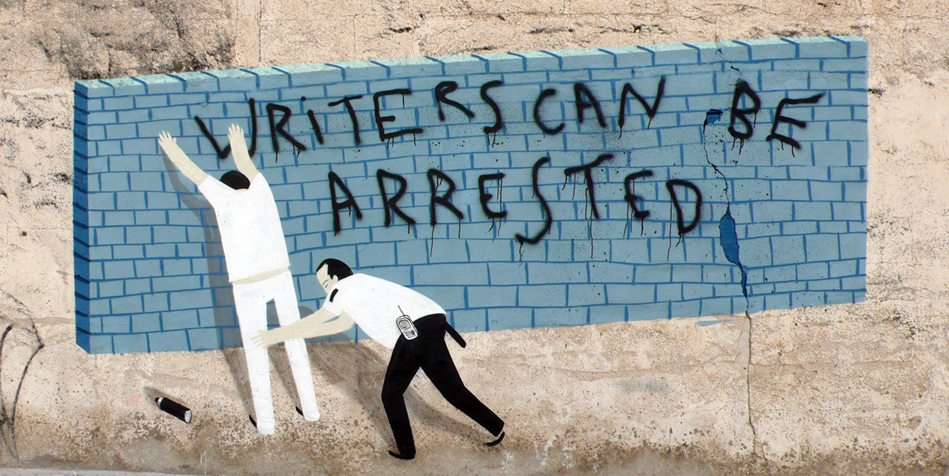 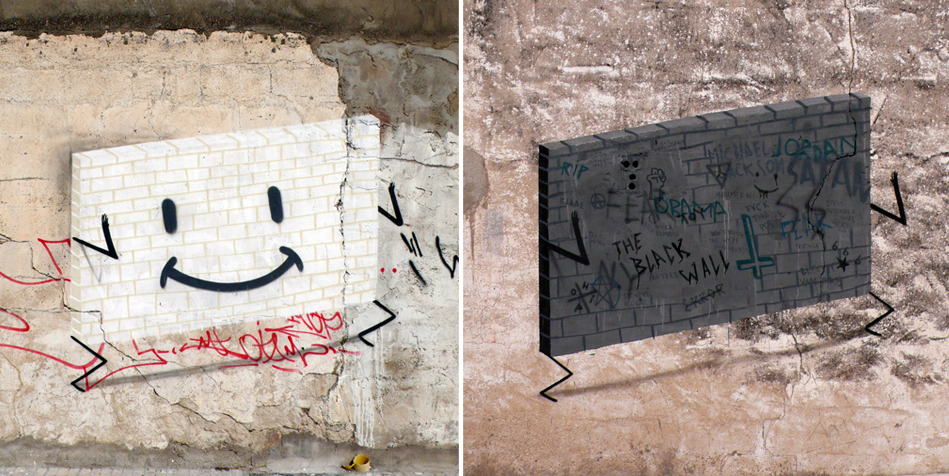 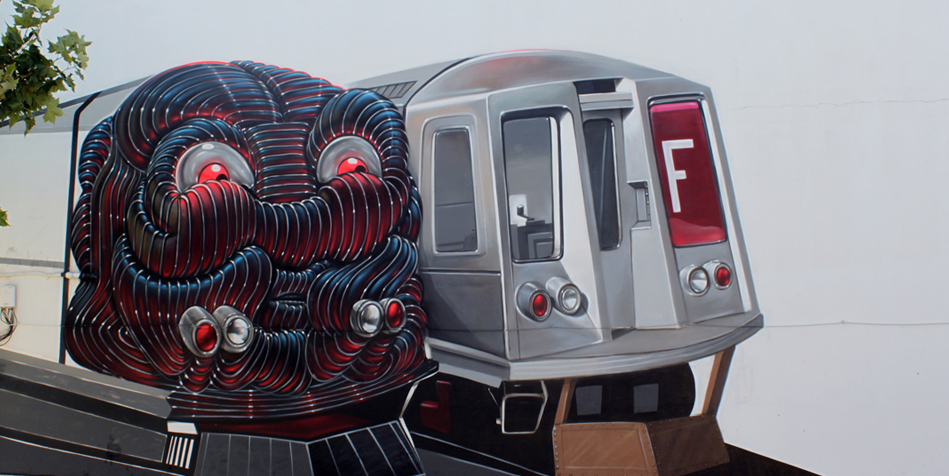 We’re very convinced that there’ll be a round two. Fingers crossed… Thanks