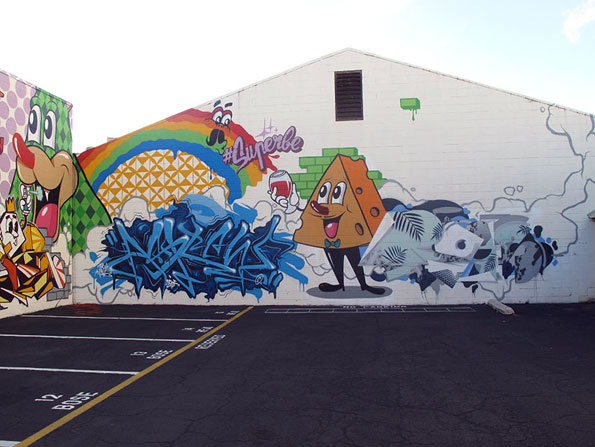 Dabs & Myla, together with 30 other international artists and several local talents, attended the 4th edition of Pow Wow Hawaii.

We had the opportunity to share with them a beautiful house in front of Sunset Beach, in O’hau North Shore (courtesy of Pow Wow organization) and this interview is just a resume of the great time we spent together. 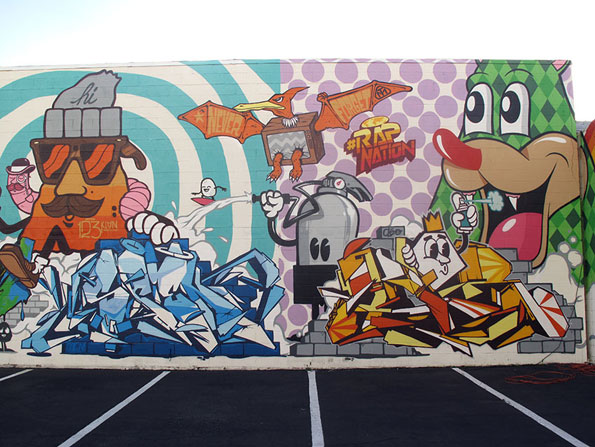 The scenery of this interview couldn’t be more dramatic, what’s playing in your iTunes right now?

We are a married couple from Melbourne, Australia, but we live in Los Angeles since 4 years. We work together in everything we do: we make paints together, we make walls together, we paint graffiti, both letters and characters, together.

Dabs&Myla’s illustration and graffiti show a really personal style, strongly influenced by Cartoon’s world. Could you tell us where this influence comes from? Any inspirations in terms of style?

We both grew up with a strong interest in art and we both really like Cartoons.
As far as it concerns me (Dabs) when I was young, I used to watch really old American and European cartoons from the ’20s to the ’50s , because my uncle had a really large collection. This is definitely a big influence that mixed up in the 90s with our interest for Graffiti letters and characters. 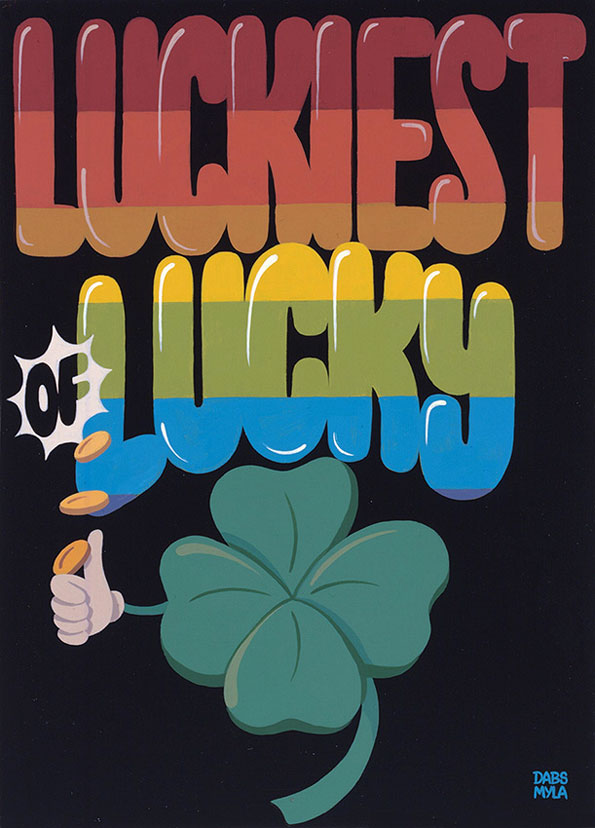 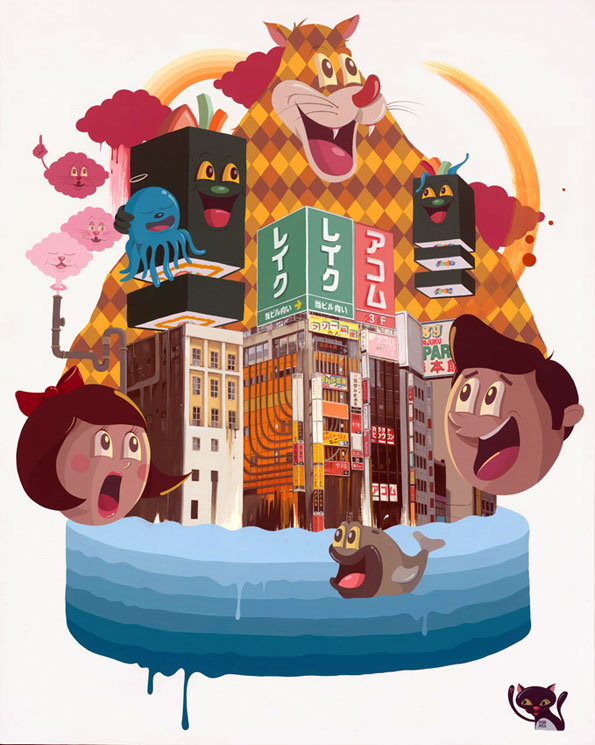 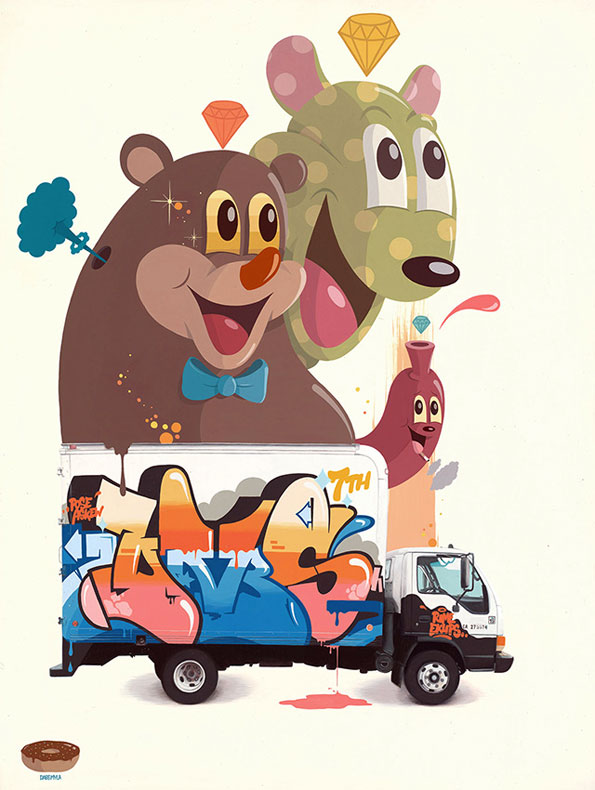 Mention some Cartoon you specially love.

Definitely Tex Avery‘s “Red Hot Riding Hood” is one of our favorite: it’s about a sexy lady and a wolf character. We love all MGM works of Tex Avery, Warner Bros’ Duck Amuck, Walter Lantz‘s work, Skeleton Dance and basically all the Disney’s cartoon from the ’50s and before.

In your illustration, together with your personal view of urban culture, there is a strong presence of animals. Do they represent something in specific?
beside that, buildings and architectures elements are often represented, is there any special reason or it’s just for your characters to keep linked with the urban environment?

We travel a lot for, because of our work, so it’s natural for us to take a lot of pictures, together with the memory of what we have seen. Most of our paintings are about situations we have lived: we take a picture of some building and we use it as a reference to work on. We add some sort of funny situation, even some abstract element.
We take inspiration from what we see and experience and we read it and represent it our way.
Animals are present in our work because, despite they often represent someone we might know, we just love to drawn them. It’s the same for objects, like I might represent myself as a hot dog because I’m a boy and she would be a donut, because she’s a girl. 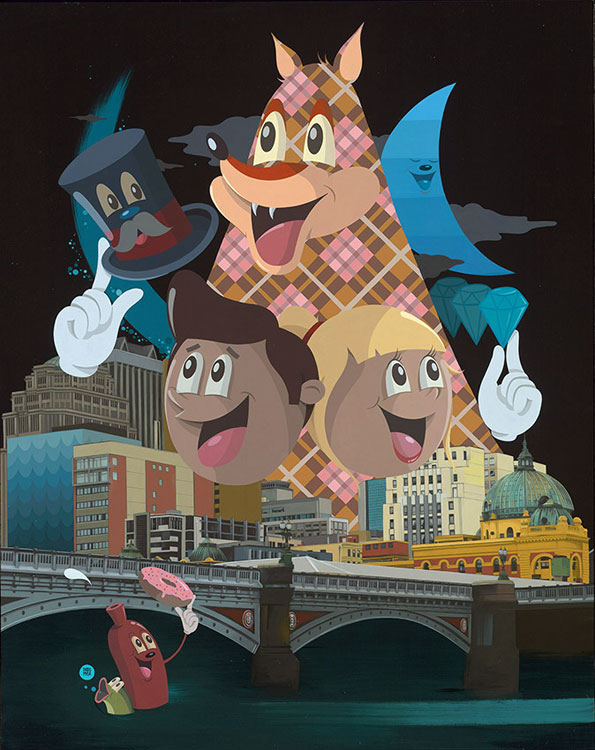 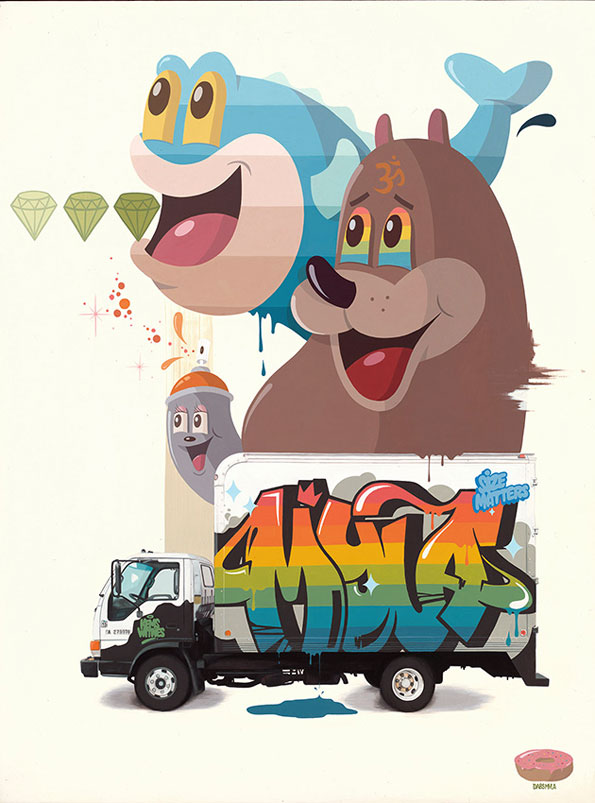 I see, so this image of hot dogs and donut bring us to the next topic: Sex is always there too. What’s its role in your art? Do you have any taboo?

It makes sense that we paint a lot of things related to sex because we are a couple and we paint together.
We specially love to draw dicks, it’s so funny!! The way we draw these subjects is so cartoony that nobody have ever felt offended.
Once we painted a giant wall in LA, with How & Nosm, sponsored by Montana Colors: what we draw was a giant pair a of boobs and, in between them, a big milk carton shooting milk from the top. The meaning was pretty hardcore but our style is so cartoony that nobody complained and that was a giant building that everybody can see in LA.
We don’t have any taboos,  as we said, we love to draw dicks, tits, even assholes, but we never draw vaginas… not for taboo but because we don’t think we can make a vagina look funny. 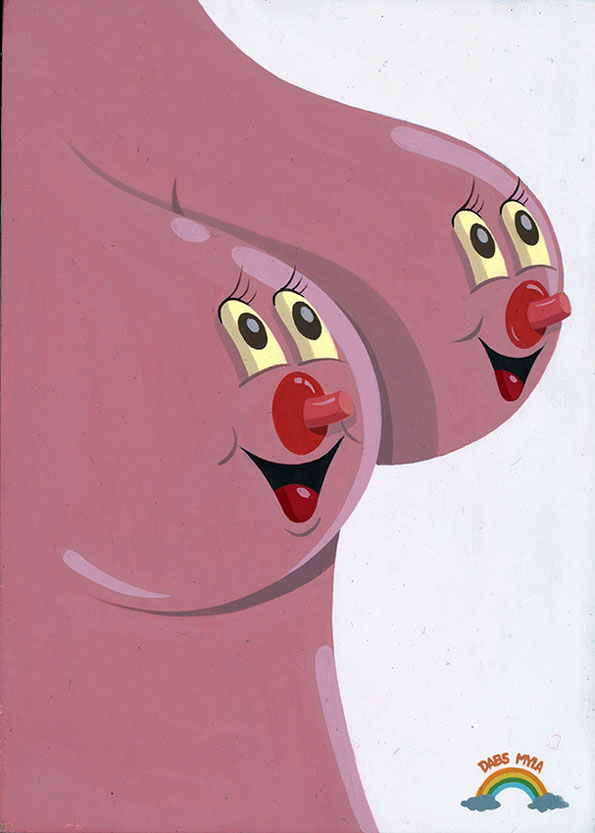 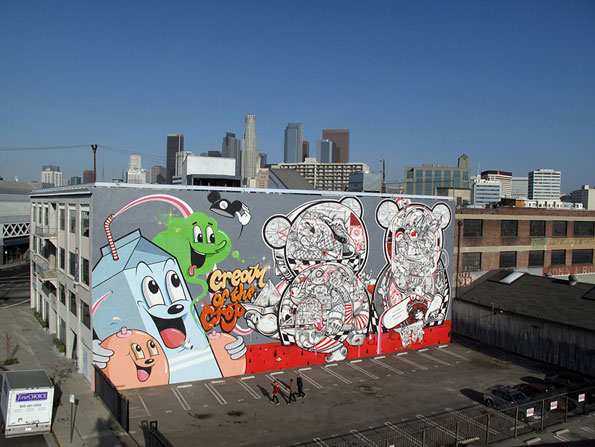 Can we say that all the worst thing you can paint are there, on Roger Gastman’s backyard wall?

Defintelly, we were totally uncensored there so we made even a crack pipe with a cute smile! but never a vagina! we’ve just never seen any cool and funny illustration of a vagina. 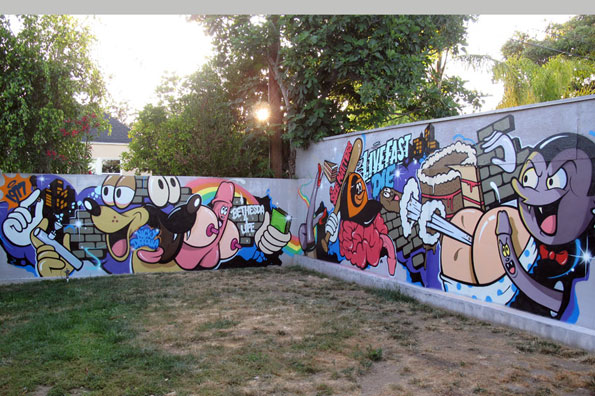 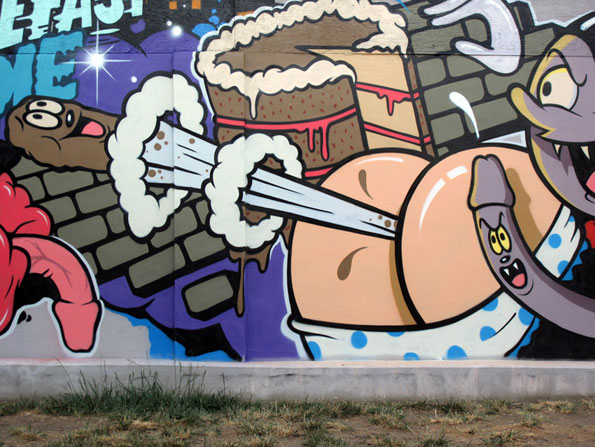 Can you mention some artists, designers or illustrators that you specially like?

One of our favorite artist is Mary Blair, she was a Disney’s illustrator in the ’50s, despite, as conceptual artist, her work was more based in the study of colors and associated with the best advertisements of the 50s.
We really love Salvador Dali, Mark Ryden, Robert Williams, HuskMitNavn, Greg Simkins and Mark Mulroney, he’s a genius!

Speaking about graffiti, we can say your style is a really classic semi wildstyle. Who are the writers inspiring you the most? Is your style “Australian”?

When we do graffiti letters we both like them to look modern but definitely have inspiration in traditional graffiti, like bold letters with bright colors. New York was definitely an inspiration, since back in the ’90s that was the only style we could see in Australia and what most of the people used to paint.
Some of our favorite writers whom we also consider as influence are our friend Jersey Joe Rime, definitely one of the best lettering writers around, Bates, Revok, Omens from Chicago, Akuze, Jaws and Puzzle from Melbourne, Soffles, New2 from Belgium.
We don’t go too far, technically, developing letters, as all these guys do. Despite we are amazed by the technical level of lettering nowadays, as far as it concerns ourselves, we just keep letters nice and bold as complements of our characters, which are the main dish of our work. 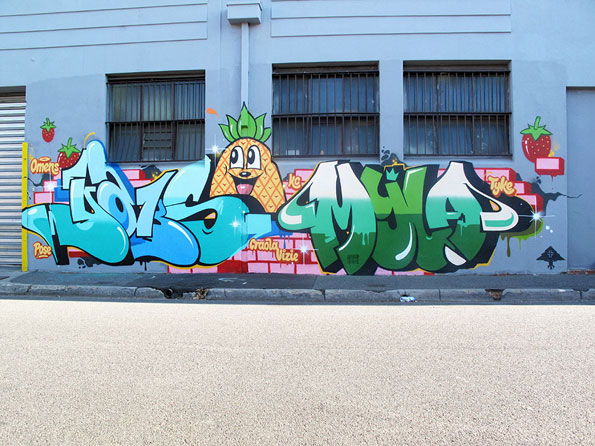 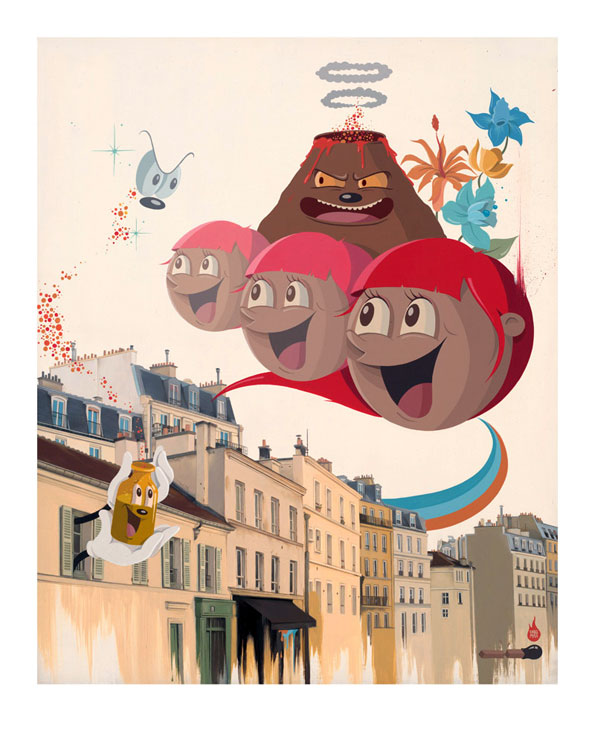 So Characters or Letters?

We are mostly known for our characters, so painting letters for us represent simply having fun, basically because we don’t do that pretty often. It’s hard to say what we prefer, but letters are often connected with spear time, fun and total freedom, while characters is what we normally do and what represent us the most.

What do you think about illegal graffiti?

We think illegal graffiti is great! We don’t paint illegal graffiti anymore, but for years we did. Nowadays we live in a country we are not from, so we have to be quite careful, we have a lot to loose from being busted now. We think it’s natural for every graffiti writer to paint also illegally: you can slow down but you can’t stop.
As we said, right now we are not into this, but for sure it’s just a matter of time, when we’ll be less busy, to come back onto this field.
We love it and we found it really enjoyable.

Anybody you would love to meet?

We would love to meet the actress Kirsten Dunst, she has a nice face and seems to have a nice disposition too. Also Jim Philips, he was a skateboarder and a designer too, specially famous for his artwork on Santa Cruz skateboards and surfboards. He’s around since a long time and well known, but we have the feeling he deserves to be even more famous for his illustrations.

Anybody you would love to paint with and still didn’t happen?

We never painted a big production with our good friend Pose, but this is gonna happen in the really near future.
We never happen to paint with Os Gemeos and it would be great to do something with them. Our styles are so different that would be definitely interesting to see how to combine them.
As a childhood dream, and it looks like is gonna happen soon, we would love to paint a piece right next to Seen, not a character, just letters.

This was your first experience in PowWow Hawaii and you worked out a great production with Scien & Klor 123 Klan. Tell us about the whole experience in general and this collaboration in specific.

We had such a great time in Hawaii! We didn’t know what to expect, since we’ve never been here before. We had time to relax on the beach and sharing a big house with everybody. It was great to know all the artists involved and it was definitely the most enjoyable event we’ve ever taken part: come on, we are in Hawaii living right on the beach, eating hips of coconuts and pineapples and tons of seeds, yeah they have great seeds here.
We worked before with 123 Klan, they are friend of ours and we have a great connection, not just because they also are a married couple: we have similar ideas about how we want to do things and a similar work ethic. It’s such a cool combination, two girls and two guys, a lot of fun and so easy communication.
They also have our same way to go over bad things and make them so easy! We love these guys! 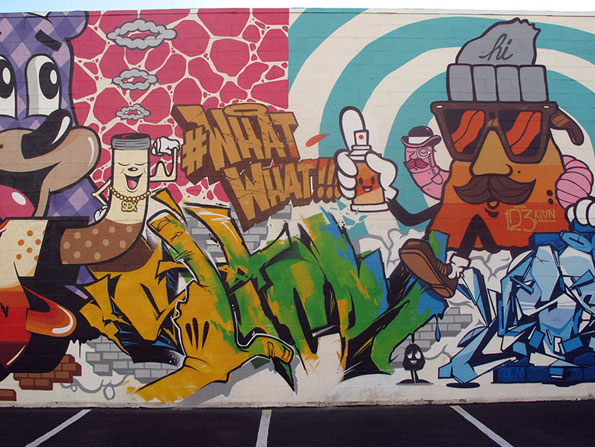 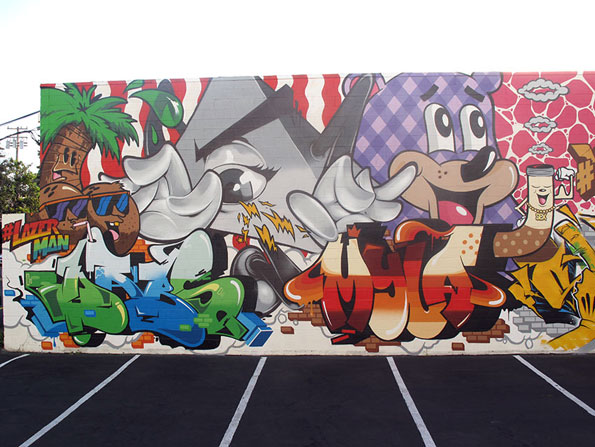 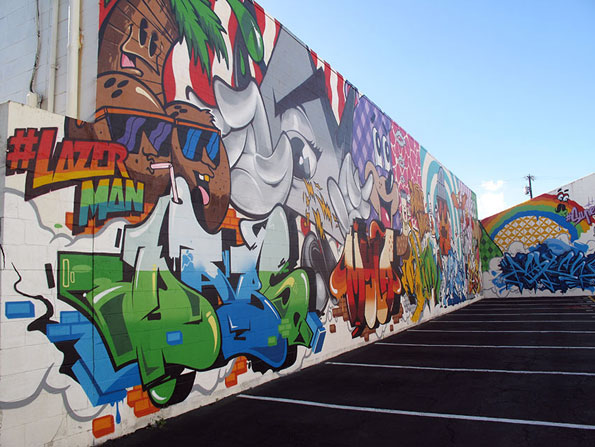 Some days ago, we were talking about the first travels and the first experiences and that butterfly in the belly they gave you. After so many travels, events, painting and in general, experiences, is there something that still gives you butterfly lately?

We didn’t have that feeling for a long time now. Basically in the last four years we were so lucky traveling and working in amazing projects that in a certain way we became used to it and we lost that magic feeling.
Curiously last time we felt something similar was when we had our first tattoos, we were so excited!!
We think that this feeling is not any longer connected with travels or paint projects, because this became our routine. Even if you put us in a plane to Brazil tomorrow, for going painting a giant wall with Os Gemeos, we would feel so happy and excited but still missing that crazy adrenaline which doesn’t make you sleep the day before.
The butterfly will come back and we are sure about that, because it’s part of human life, but for us, it will be connected with any other kind of new and strong experience, not related with our work.