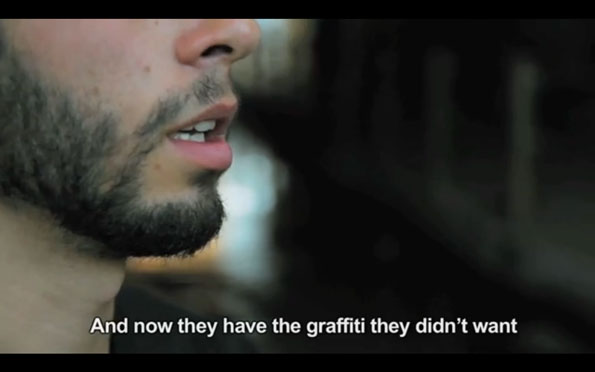 Gustavo Lopez Lacalle and Aleix Gordo presents “BCN Rise and Fall“, a documentary that shows us the transition that Barcelona has suffered since being the Mecca of street art to becoming yet another place of zero tolerance towards graffiti and urban art.

In the video you can see some of our local artists such as Zosen, Aryz, Devon Ostrom, Kram…

Graffiti is one of the most democratic and yet politically divisive art forms in the world. In early 2000’s, Barcelona was one of the most exciting places in the world to be if you were a street artist. A city overflowing with talented street artists and a strong tradition of culture, attracted internationally renowned artists like Banksy, Obey or Os Gemeos to come and create art on the city walls. From 2000 -2004, Barcelona enjoyed a Golden Age of street art and muralism, which spawned the careers of many famous Spanish artists. In 2004, the local government began to enforce strict laws and penalise artists for illustrating their urban environments. Today, Spain is in the midst of a deep economic crisis and unemployment has th highest rate of all history. Cultural spending across the board has been slashed, and yet the local Barcelona Government spends 8 milion euros a year on cleaning up the city from gstreet art. It also does not mind collecting vast sums of money from advertisers who choose to drape their corporate branding all over Barcelona’s many beautiful old buildings but they don’t view that as urban visual pollution. In other cities like Lisbon, Berlin, New York, Toronto and Rio De Janeiro, street art is not only encouraged, but it is one of the things that attracts people to these vibrant cities. This documentary looks at the development and highlights of street art in Barcelona and asks whether the present day draconian laws are part of a wider global problem that sees governments increasingly making decisions about its citizen’s urban environments without asking them what they want. Told from the personal viewpoint of well known Barcelonian artist, Aleix Gordo Hostau this film features artists such as Zosen, Aryz, Dixon, Devon Ostrom, Kram and more.