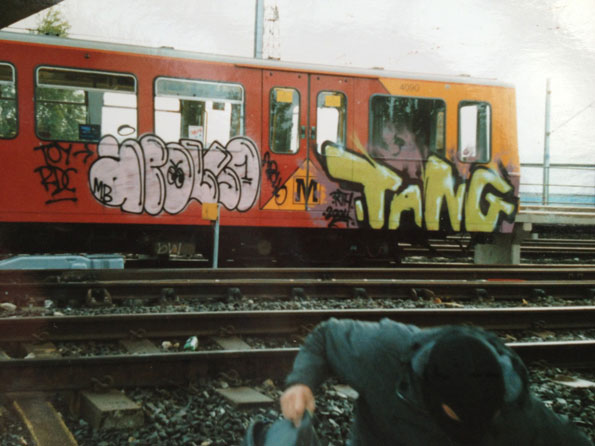 There is a proverb that says that a picture says more than a thousand words. In a culture as visual as graffiti can be, this phrase becomes very true. A photo can tell us a lot more than most first impressions. If you also add an artistic touch the photography like some images of graffiti has, the image in question is worth admiring for a while, and not just scrolled by and unobserved like any other pic on the web.

This Sunday we bring you this powerful photo found on the tumblr of Subsociety.
The subject is a analog instantaneous pic dated to back 2004, as you can see thanks to the date in one of the pieces.

The authors of the work are none the less than Apolo (ERS, RDC, TOY, MB… amongst other groups) and Tailor (RTH, MB’S, RNB).
The red and yellow wagon shines with its “M” on it, characteristic for the New Castle metro.
British train models is something that not all writers has in their blackbooks, partly because of the inconvenience of traveling there on Inter-rails, but mostly due to the difficulties of painting there  and the hard laws that surrounds it. Surely this is the reason to why Apolo and Tailor has pulled out these fast version of their characteristic styles. Our man from Liege has made fast throw-up, still as charming, and the native from Bordeaux sticked to a fast technique below his alias for pressured situations: The classic Tang. Two very different styles in perfect harmony with a lot of grace is to be found on this New Castle postcard, that also show us the stress of the situation with the busy presence of one of the protagonists.