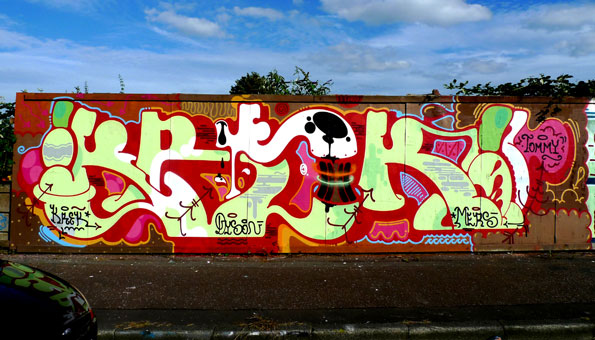 Every writer has a different way of assimilating their own work. Some proudly display their pieces, others more self-demanding never seem satisfied with what they do. And of course there are those who would not care much about the aesthetic result of their graffiti. But without exception, they all have some works which they feel dearly for and remember always with great fondness. They are the favorite pieces.
We are now setting up a section in which any writer can show the 3 pieces he/she likes best out of all their published material .
A piece can be regarded as a favorite for its sketch, color, location it was made or simply for the story behind it that the picture could not capture. In any case it is a good way to understand the tastes of the writer in question and also remember that every piece of graffiti that we see is much more than a few colors applied to a surface.

Now is the turn of Krek FMS.

‘The week before this piece I had painted the exact same spot with the the legendary Zedz whilst he was visiting.
But I was so mixed up in my mind at the time with life stuff that i didn’t finish my piece with him that day and by the time i went back to finish it had disappeared…

So a few days later I came back to the spot with all the paint I had lying around.
Bits of Emulsion, Car paint, 94 and anything else i could find – With No plan, no sketch and no idea where I was going with this piece or with anything in general at the time. I remember painting this piece very differently than usual, I was grabbing any can without looking at the color, the cap or even thinking about what I was doing, which is a very unusual process for me. As I usually like to keep things simple, a few colors and I know where I’m going with it…’

I had a load of fun painting in this chaotic way but I was very dissapointed with the outcome of piece at the time and I wrote in huge letters next to this ‘Childlike – Knowone understands’ which was a Beatles reference from the song ‘Hey Bulldog‘ which I was listening to at the time. But it became one of those pieces that ‘grew’ and has grown on me months later.
I like this piece for the process and experience rather than the end product and also for the fact it survived for nearly 6 months which in Manchester nowadays is unheard of…’

‘This as you can see is a very different ‘style’ of graffiti that me and my partner Mers used to do years ago. When we were younger I had a very organized and completely different approach within graffiti. I personally would use certain styles for different means, for example I would only ever paint my more known ‘simple rounded funk’ style illegally to create different impacts. We painted these pieces in the Manchester United and Manchester City football teams colors and wrote the words ‘Hate United’ next to the Blue Manchester city Mers piece and ‘Hate City’ next to the Red Manchester United Krek piece – right in the Heart of Manchester’s streets.

At the time this was painted I was more productive and active as a writer than I have ever been. I was eating, sleeping. living and dreaming graffiti and was doing all sorts allover the place all of the time. Which is why I like this piece, it reminds me of the best times I have ever experienced within graffiti…

The pieces were painted at my all time favorite spot ‘Hulme Tunnels or Hulme Subways’ as they’re known and is one of the most famous spots in the city. Due to local Kings such as Onek NM, Carl 123 and Kelzo to name a few painting some of the best pieces for me over years…
Shortly after this piece I was Raided and after a year on trial subsequently Jailed for Graffiti Vandalism charges. Nowadays the standard of graffiti at this spot has crashed, But it was nice to have painted there so frequently on the regularly cleaned tiles…’ 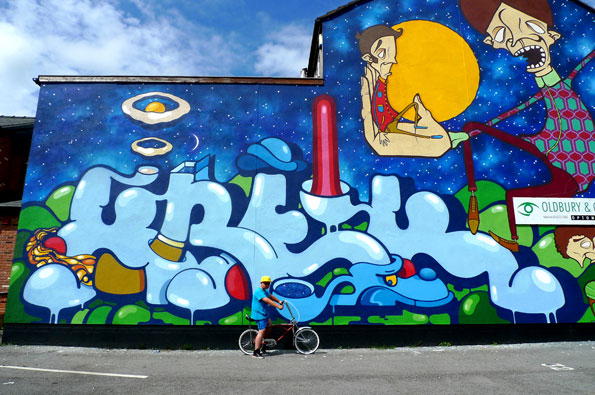 ‘We had a lot of fun and nightmares painting this piece (characters by Drof).
Everything that could of gone wrong did – The lifts would constantly break and the whole wall had to be primed twice before we could get the paint to stick to the wall as it was made of this crazy absorbent material – But all in all it was fun and a good challenge.
I like this piece Purely for the size and scale and also for the Juxtapose of the wall. As this bright and colorful piece was painted in a a very grey, dull uninspiring town just outside of Manchester called Macclesfield which fits with the happiness of the piece and the sadness in the characters…’