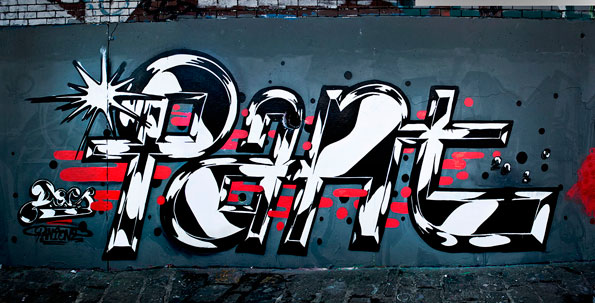 Pantone gave us his Three Aces!

‘This piece was the first of many in this style, and thats why I have a certain feeling for it. I painted it in the end of 2009 when I lived in Leeds, I guess it was the beginning of a long period when I did these metallic effect pieces, it was fun. Now I don’t do them anymore, I’m tired of seeing it.’ 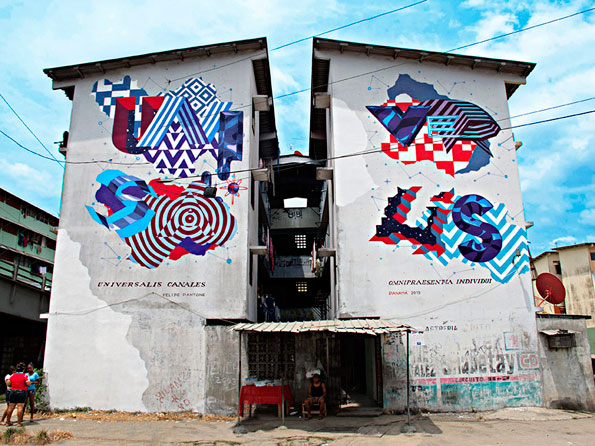 ‘I landed at the international airport of Tocumen in Panama and this guy which presented himself as as government employe was there waiting for me. The guy brought me out of the airport without having to pass by the customs, through a backdoor. They put me in a black government car with shaded windows without any registration plates, and they took me to the hotel. So far everything was all good…

They following days I go to know the people from the organization and I asked them about the space and the material for the mural, and nothing was really clear yet. The seriousness ended that day after what happened in the airport, and what was left now was the classic carribean efficiency. This made me go and look for a wall myself, something to match my conditions, especially in size. This guy took me around in the city, and I saw this wall between two important roads of the town: The place was perfect so we stopped to check it out. We met this big guy called Marlon which admitted he was the head of the gang in the area when I asked him where I could find the responsible people of the community. He gave me the permission to paint, and his gang members around him nodded their heads in accordance to his decision.

The next morning I came there with the sky lift and started to paint in the neighborhood of Curundu, Panamas least friendly side of society. After a nice session of painting two older women came below the lift and told me what they thought while their sons looked at me with threatening eyes. Four cops came to tell me to come down while 10 more policemen came to the location. All in a military style, and they had to calm down the people around because Marlon wasn’t able to. They put me in cab and i disappeared.

I woke up the next day by a phone call from the director of the event telling me to come back, saying I got custody. I think they settled it with some money between, but I’m still not sure how they worked it  out. BUt the second session went great, until the police left. People started asking me to paint the panamanian flag, the symbol of Real Madrid or even the football shirt Fc Barcelona. It was almost 40 degrees celsius in the sun and it made me sweat so much I didn’t even have to pee for the whole day, even of I easily drank 5 liters of water a day. From where I stood up there I could see one guy pull out his gun and put it to the head of another guy after a long discussion, and I also saw Marlon selling crack in the streets between the housing projects. 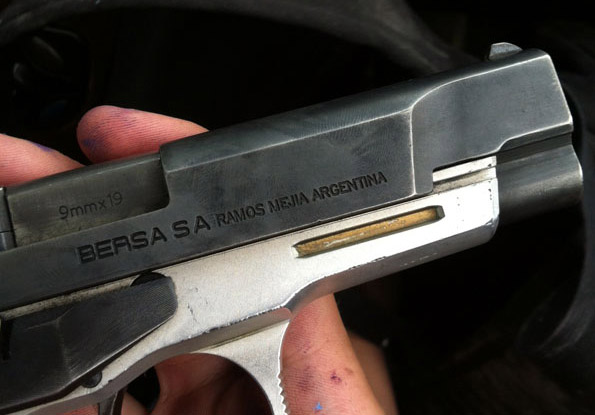 The third day I was finished by mid day, but the people from the organization didn’t pick up the phone when called them to come and pick me up. Marlon the boss of the gang offered to take me back in his Mercedes, a car you didn’t see many of in this neighborhood. While in the car he showed me his gun, a Bersa made in the neighborhood where my father was born in Buenos Aires. His friend started messing around and held out the gun from the window of the car, showing it to the girls waiting by the bus stop. When we got back to the event he showed his piece to the other artists, and also some nude photos of the girls he had been fucking. I was hallucinating over it all. I told all the guys from the neighborhood that the piece wasn’t finished and that I would come back the next day to finish up and say goodbye. Greeting from here to Marlon, Gordis and Giban.‘ 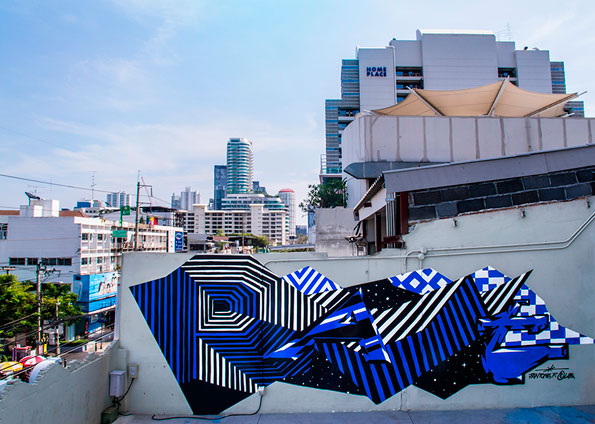 ‘This piece more or less sums up what I’ve been up to lately. the shines and the synthetic style. The piece helps me as a point of reference to know where I am going right now. It was really hot in Bangkok as well, but the food and the drinks at the Badmotel was the bomb.‘

THEY DID IT AGAIN IN THAILAND!

'LOST IN PARADISE', GOOZ IN A TRAIN GRAVEYARD IN BANGKOK