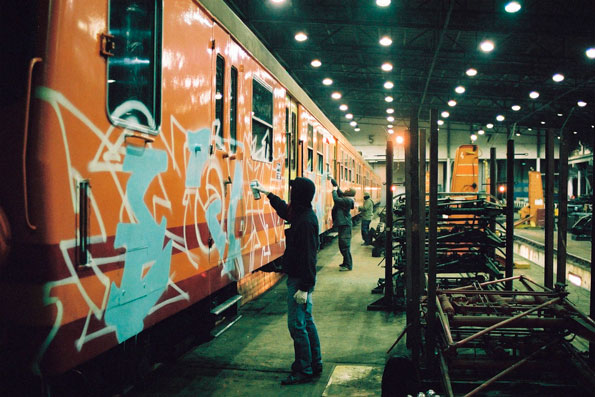 The image we show above displays three graffiti writers in action, inside a train garage. This three people got their pieces in process, complicated wild styles that seem to have german style. In a photographic way, we can perceive a professional composition. This is the reason: this image is from the german film titled ‘Wholetrain‘.

‘Wholetrain‘ is a fiction movie from 2006, directed by Florian Gaag. The photography of this film s in charge of Christian Rein, then, he is the person responsible of this image we choose for today’s postcard.

Florian Gaag presents with ‘Wholetrain‘ the story about a group of friends who form a graffiti crew. Their lifes suffer the current complications in a graffiti writer’s life, but all become event worst when break out a beef with the new rising graffiti crew of the city. The trouble become critical when the rial crew challenge them to make a whole train. The movie shows with quite accuracy the quotidian life of the graffiti writers, and also his way of interact between themselves and with the society.  According to the words of Florian Gaag: ‘I always thought there ought to be a movie that beats Wild Style by showing the topic forma a more realistic point of view.’ The film has appearances of well know writers as Won ABC.

The trains we see in the photography are the classic Polish commuter trains, with orange panels and yellow doors. For the shooting of the movie it was necessary to get an authorization from the train company to film the action scenes and the trains with pieces in traffic. That permission, that obviously would be deny in Germany, was also refused in Hungary and the Czec Republic. Finally they achieved an agreement with the Polish train company and the scenes were filmed in Warsaw.

21PLUS, HARDCORE ACTION IN VALPARAÍSO