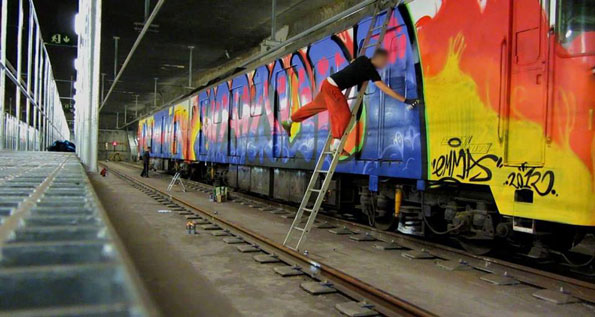 In the image we can see Snaque from OTP crew while making a color wholecar on a ladder next to another wholecar (married couple) made by another writer less easy to identify.

As we have come to see through rumors on the internet and certain types off press, the last year  underground activities has increased considerably in Barcelona.

This increase has come to a point where the least dependable forum of information, media such as the press and television had started raging over the new situation.

The last week we have been able to see a alarming amount of news relating to graffiti activities both about Madrid and Barcelona. Newspapers and TV has given quite a large space for the subject lately by reporting about the latest arrests and investigations. As we might have guessed, these news lacks of truth and intentionally searches to create opinion through exaggerations and by dramatizing the situation. The intention is obviously to create a public opinion, but the results might be a dangerous social need for alarm.

The graffiti on trains has always been used by the media as a wildcard for information very short of truth and quality content. However the last wave of news has not stopped at exposing only the last arrest or the last graffiti video that came to hand. This time we have had the pleasure to read about specific and general situations in many different cities.

It is not hard to imagine that the results of all this might have quite serious consequences for many graffiti writers. This is why it is important to call out for precaution and, above all, start avoiding behavior that might facilitate the social criminalization of graffiti, and take care for the sake of the integrity of the people involved in the matter.