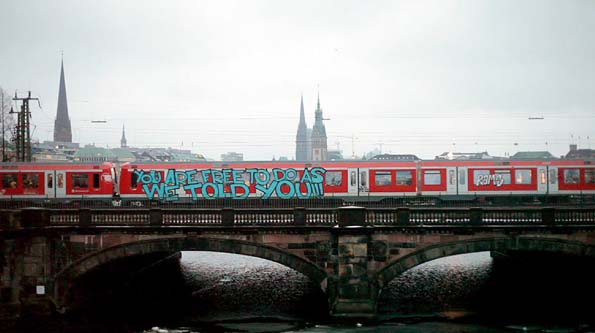 What is The Grifters? A crew? A web page? A project? Boris from Bulgaria? It is hard to determine…
But what we can say for sure is that The Grifters is the most important phenomenon that ever existed for graffiti since the new era of the online social networks started to become big.
The Grifters lets us in close up into the daily life of todays graffiti writer. In their videos, starring the funny character Boris from Bulgaria, and they squeeze the juice out of the cliches of graffiti with their sharp and ironic type of humor. So what is the objective? Fame! We are talking of a new type of ‘getting up’ in its 3.0 version.
They have published and interview (it looks like an auto-interview) that surrounds their common universe. Interesting to say the least…

‘The Grifters™(…) is the best thing that ever happened to internet graffiti media: an original photoblog, showing the lifestyle of graffiti writers around our social circle. The focus is on everything that we do before and after the final product – the graffiti piece – is created.’ 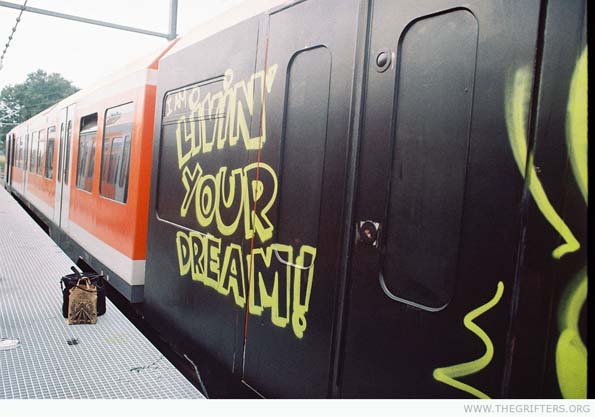 ‘Being famous in graffiti circles is one of the most useless efforts that you can waste your life on. It neither helps you get rich (and thus financially and emotionally free), nor does it help you with your health or to get laid (…). Instead, by the time you are in your thirties you get admired by a bunch of teenagers, while you get the added benefit of your wasted life. So what is it all about?’ 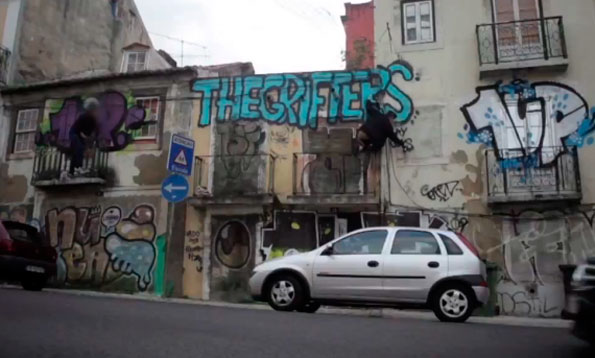 ‘Anecdotally, a fellow in a southern country recently demonstrated some of this, while putting on his mask in a totally bombed train yard with no cameras. While one of us was doing a portrait of him, he turned around and said “Do not worry, you don’t need a mask, I just wear it for the style!” Touché.’ 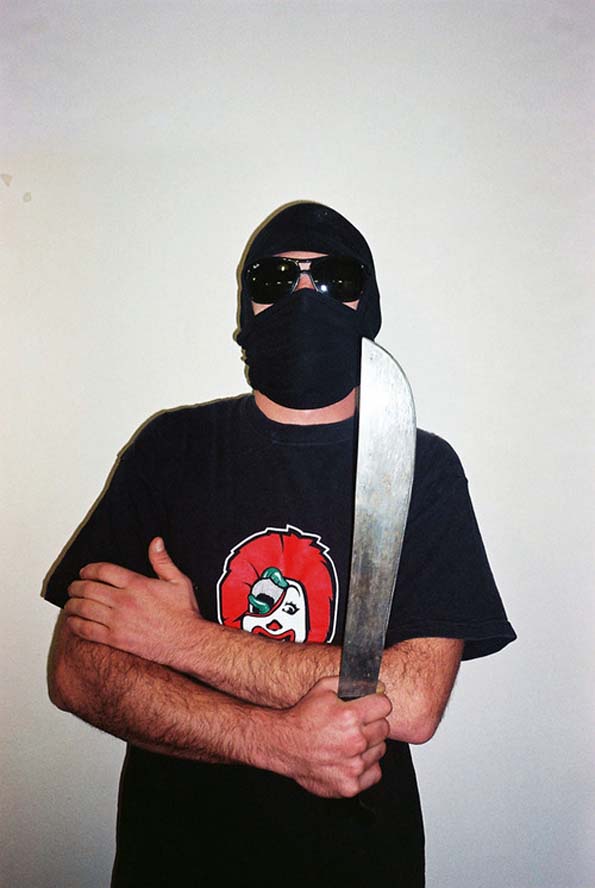 ‘We are never strangers because we have the ability to adapt fast and infiltrate, wherever we go. Whether in an underground bar, a five star restaurant, in a train yard, striptease club, pool party or Starbucks, we try to take on life from all sides. We might be the mysteriously smiling gentleman next to you on the next table, or you might catch us in a riot with Molotov cocktails – you never know. However, in a big city life is much easier and this holds especially true for melting pots like Paris or New York, where the nationalities, cultures, lifestyles, and languages are mixed, you can find your way easier and choose what you want to be like.’ 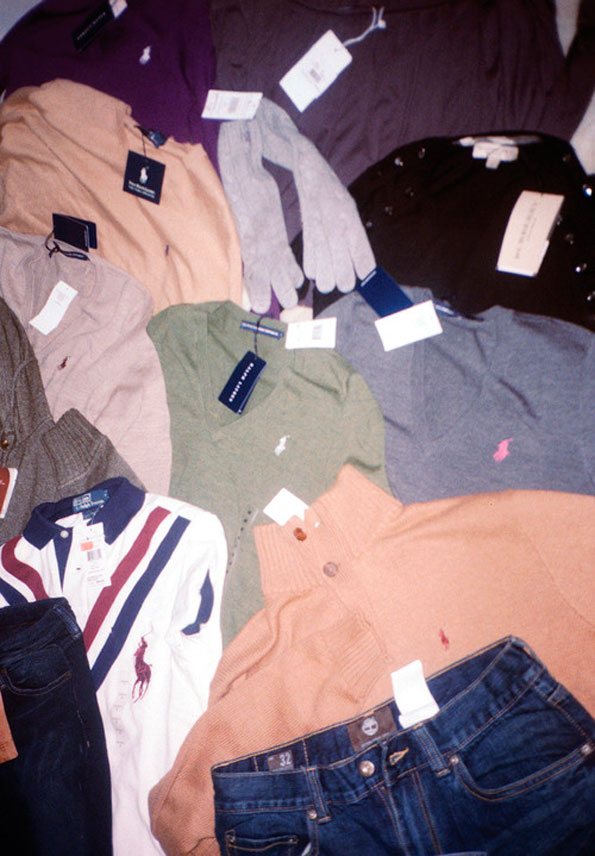 ‘Most guys would actually never try something by themselves, so they call the locals and ask them out. They might even never have had a subway in their own city, but do it for the perceived social validation and apparent ego boost. Our belief has always been that this type of character never lead to anything good.  Such guys do not even know why they are doing it. For them – “NO, METRO, NO POSSIB”.
On the other hand there are people who are strictly dedicated to metro painting and have plenty of experience in this. They never stop traveling and exploring new, weird places, countries and horizons with, apparently, one idea only – to get the system. However, some of the more dedicated guys we met over the years stood out with their love and desire to absorb the local flavor and party properly, when the time is right. The difference with the former is the underlying motivation and clarity about the purpose. For them – “YES, METRO, POSSIB”.’ 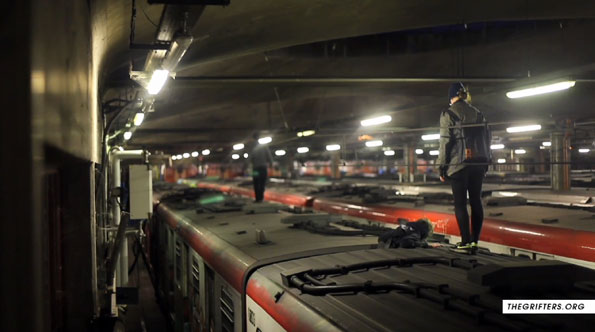 ‘We did have girlfriends at that time, but the girls were never there – they were keeping the house warm and biting their fingernails off, while we left their hugs and kisses to spraypaint a specific set of colors onto some metal that we had set as a target. It kind of ended up like an episode of “Where The Girls Aren’t”, and we deliberately chose the sausage party. Quite gay, isn’t it.’ 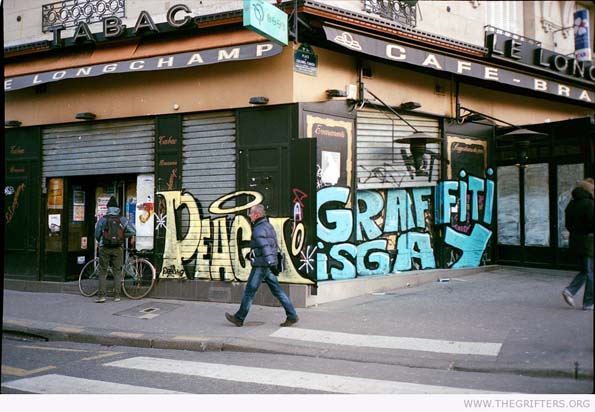 ‘We don’t like labels. But if you are the smartest person in the room, you are in the wrong room.’