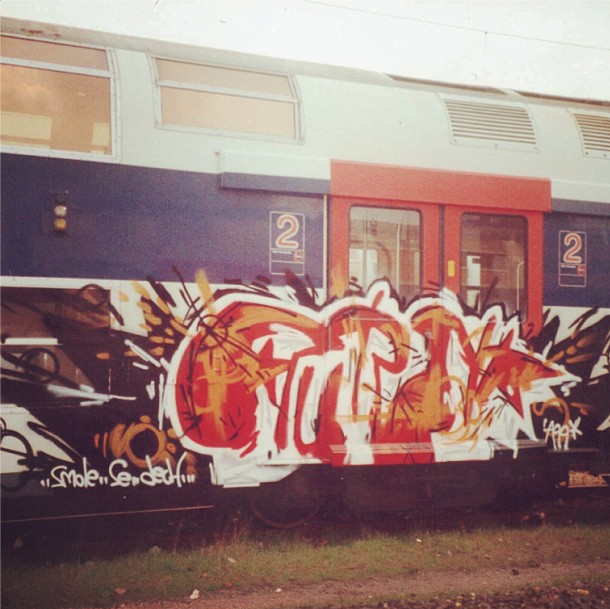 This sunday we bring you this image from the Instagram of 2Shy.
This frenchman which now lives in Belgium shows us in his own shy way a fragment of his past… and many of his fans today might not now that he used have aliases as Turn and Necro, through which he completely punished trains and metros throughout Europe back in the day.
This piece titled Turn on a parisian double decker is from back in 1998. At this point of time Turn was a member of the famous T?C crew, (The Unknown Clan), a collective dedicated to the vanguard graffiti styles which in those days where a trademark for french train-writing. The composition of the letters is a perfect example of of this style tendency: Contrasts between positions and width of the letters, broken and violent lines with garish colors… all elements of a style which came to influence writers from north to south of France, and even abroad outside of the country.
The present styles of 2Shy is completely different from this and might be a good way to show how the styles of a writer can change drastically over the years.

“In terms of writing, everything has already ben said and done. I don’t believe in a norm where backgorund would be obligatory for a panel; nor in some laws we should follow when we do 3D… I paint to escape from traditional rules.” (Necro TMA interview, XplicitGrafx #5, 2007.)