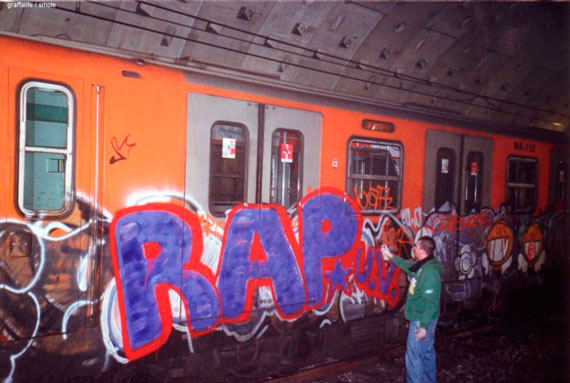 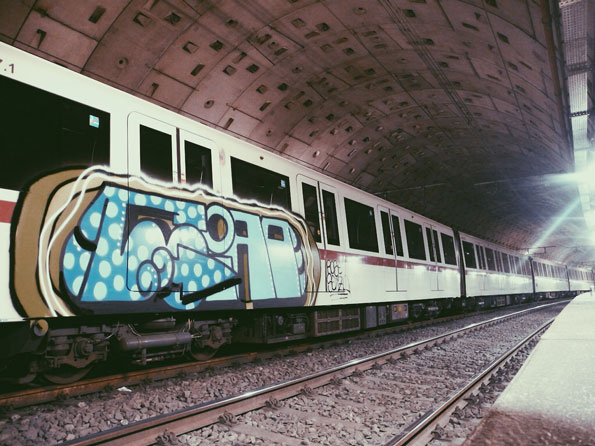 This Sunday our postcard is double. Both images are taken in the metro of Rome, precisely on the line A. However, they don’t belong to the same era, and even if they are not that far away from each other time wise, they present huge differences which are interesting to analyze.

The old red and orange model has been replaced by new units. A change which has brought with itself a more thorough cleaning and maintenance than with the old trains.

Historically Rome has always been the place in Europe where the pieces in the metro could run around in traffic until someone else would go over it.  With difference fromBucharest, Catania and Athens, these characteristics of metro painting started from back when the first crews started to  bomb the system, and has stayed like that up until they changed to the new model.

Both images also correspond to other types of changes. The old graffiti infested metro was a powerful appeal for graffiti tourism. It was a quite generous offer for writers all across Europe  to be able to have their panel running around forever in a metro system which was considerably easy to paint. It was impossible to resist, and therefore Italy’s capital became frequently visited with the metro which became a sort of guestbook to prove that you had been there. In the first image we can see Rap UV TPK painting a piece on top of throw­ups, even the icons of Sme can be seen on the right.

The growing difficulties which came along over the years, and finally the change to the new model, completely buried the peculiarity of the Roman metro making the system less attractive target than it used to be. In the second image we can see a panel by Ciao crew, one of todays most active train writing groups in Italy, and here in front of a spotless convoy of the new model.