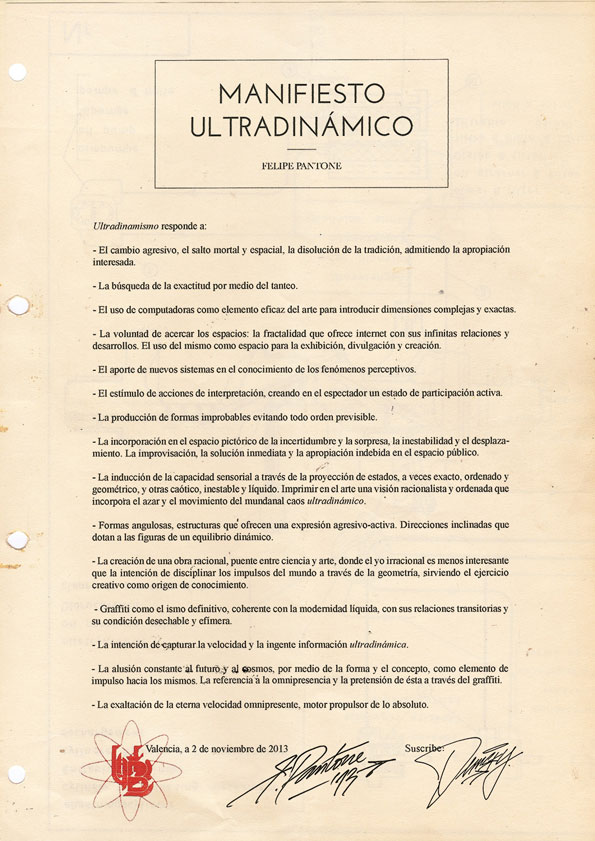 – The aggressive change, the somersault and the spacial jump, the dissolve of the tradition, admitting the interested appropriation.

-The seek of accuracy through estimation.

– The use of computers as an efficient element of the arts in order to introduce complex and accurate dimensions.

– The will of bringing spaces closer: Internet’s fractal aspects with its infinite relations and developments. The use of it as a space for exhibition, divulgation, and creation.

– The contribution of new systems in the knowledge of perceptual phenomena.

– The stimulus of interpretations, creating in the spectator a state of active participation.

– The production of improbable shapes, avoiding any predictable order.

-The incorporation in the pictorial space of uncertainty and surprise, instability and displacement. Improvisation, immediate solution, and wrongful appropriation in the public space.

– The inducement of the sensorial capacity through the projection of states, at times precise, ordered, and geometrical, other times chaotic, unstable, and liquid. To impress in art a rationalist and ordered vision that incorporates chance and the motion of the madding ultradynamic chaos.

– Sharp shapes, structures that offer an aggressive-active expression. Leaning directions that give figures a dynamic stability.

– The creation of rational work, bridge between art and science, in which the non-rational self is less interesting than the intention to arrange the impetus of the world through geometry, utilizing the creative exercise as a source of knowledge.

– Graffiti as the ultimate ism, consistent with the liquid modernity, with its transitory relations and its disposable and ephemeral condition.

– The intention to capture the velocity and the enormous ultradynamic information.

– The constant allusion to future and cosmos, through shape and concept, as an element of thrust towards the aforesaid. The reference to omnipresence and the aspiration to it through graffiti.

– The exaltation of the eternal omnipresent velocity, driving force of the absolute.

In tradition with the first vanguard artists, Pantone and Dems recently signed a artistic manifest to define their style of painting.

‘Ulatradynamism’ is the name they have chosen for this movement whose fiveteen points gives form to a concept influenced by technology, futurism and space, and in which we can see different techniques of design, sculpture, pictorial art and graffiti.

It is true that that the type of graffiti which represents the two, of first class by the way, is the spearhead of a particular tradition of style which has been profiling graffiti culture ever since its early stage. The launch of this manifest and its links to other art forms is on the other hand a new idea, and should be considered for its originality.

The binomial pictorial art and graffiti is usually a polemic topic, more for writers than for other artists, but still we can see the common aspects in both fields clearly. The Ultradynamic Manifesto embraces these dimensions without modesty, and this way brings more importance to the style.

So, there is nothing daring about taking this new term to use since it enables us to refer to a particular style of graffiti with more concretion, giving more importance to the aesthetic part of graffiti, and ultimately, dignifying it is a discipline. 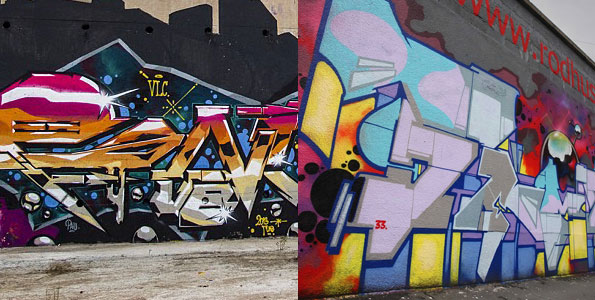