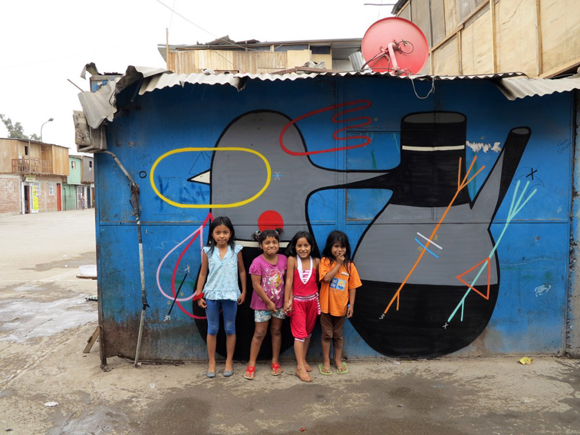 A promise is a promise, and as we mentioned in our post about the last project by Art From Chaos, here we have the interview we made with one of the artists which performed during the event: Sixe Paredes.

Strong, with desire to work on my coming projects.

What projects are you planning?

Right now I’m working on my next exhibition in London commissioned by Rafael Schacter and Tim Roter in a new innovating expo project (A- by -P) below the title: ANCESTRAL FUTURISM. 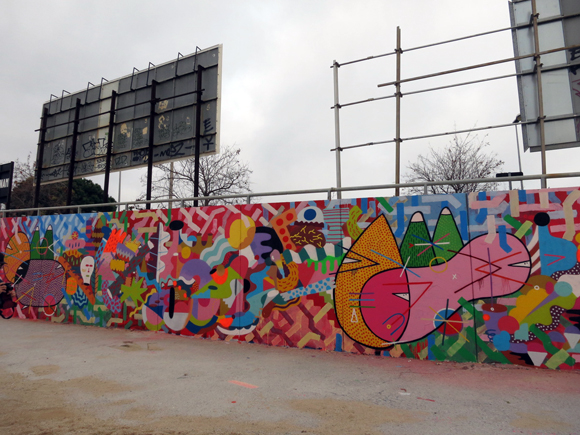 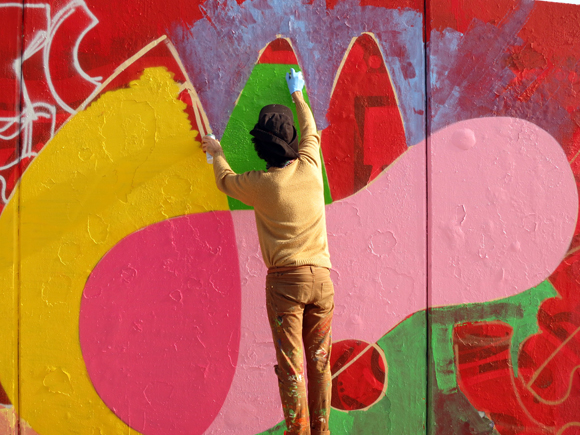 Talk to us about you’re experiences as an artist and your life in Lima, Peru

My experiences of Peru are from the last 4 years, and every time I’ve been there I spent many months traveling around in different parts of the country. The most outstanding of my experiences there was from last year, while I spent almost seven months there. On this trip I did installations in the deserts of Nasca and Pachacamac. They where totemic installations which played with the empty spaces. I called the project OFRENDA CELESTE. This series of installations I made together with a great artist and friend: Valentino Sibadon, better known as “Radio” in the city of Lima.

I also went painting in the center of Lima and the rural parts with people from the local scene. It seems to me that there are so many artists doing interesting stuff there… like Seimek, Radio, Meki… We spent many days wandering around in Cantagallo, a neighborhood full of people from the jungle which moved into the capital, most of them are from the ethnic group Shiipiba. A great community which always received us with a lot of hospitality and let us paint their houses and buildings. The same thing happened in La Herradura, Chorillos and Miraflores. I also worked with the Gallegos family, masters of their art and great people which taught me their millennial and ancestral ceramic techniques. I stayed there for some weeks to prepare different pieces for my next show. I also worked with a artist which was specialized in hyperrealistic tapestry named Luis Nesquin, a great personality who works through an ancient technique since many years.

Sculptures, offerings, deserts… What is your connection to these ancient cultures of Latin America?

I have a great admiration for ancient cultures, or usually misnamed “primitive cultures”, and since many years I have a great interest for the pre-hispanic cultures of Peru. On a day a long time ago I had the opportunity to see a large collection of Mesoamerican ceramics from Peru. After that I was lucky enough to be able to travel to South America to find my connection with this ancient world. I released myself from the prejudice that the western world had taught me, and I reconnected myself with cosmos and everything that surrounds us. 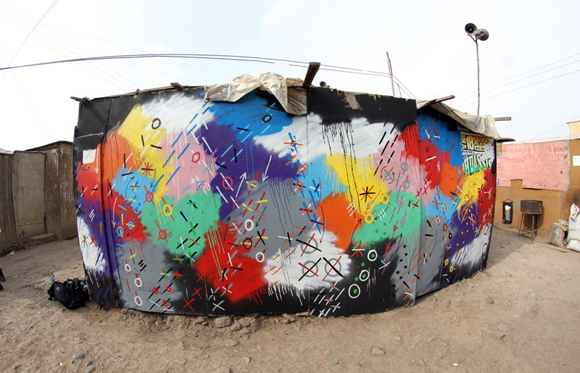 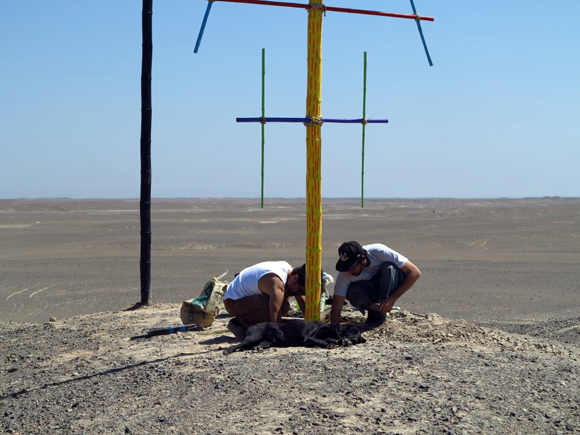 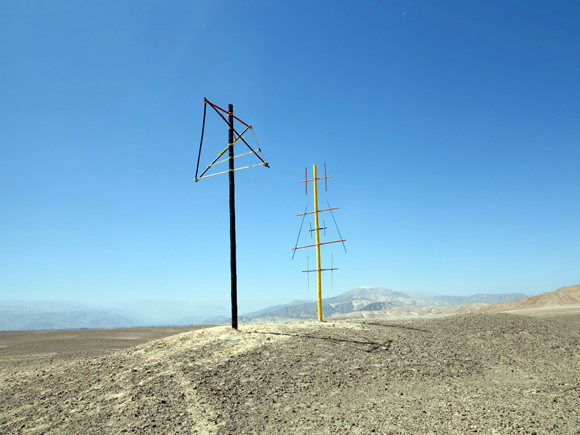 Your drive for discovering and trying new techniques… where does it come from?

-It comes from a natural process, I think that you always should experiment and try to find new paths, avoid stagnation and try to evolve. This is why I work on different series at the same time, from abstract to figurative, sculptures to tapestry, mural paintings to graffiti or ceramics to macrame.

What big differences can you see between Barcelona and Lima?

The biggest difference which stands out in my line of interest is with no doubt the freedom you have when painting in different public places, it reminds me of how Barcelona once was. It was as easy as asking the neighbors for permission, and that was it… and then go to work. Also the amount of classic areas which was at your disposal, and also the margins of it when it came to talking to the police. In Barcelona it gets worse every day, we have hundreds of ridiculous prohibitions which represses our liberties, and I’m not talking about the theory of anarchy, but the maintaining of all artistic expressions you can find in a big city. 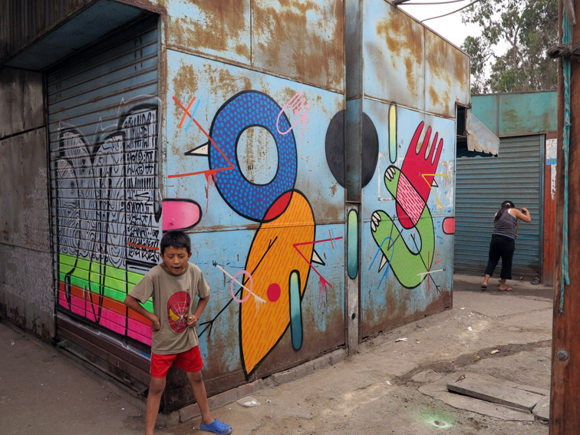 How has your graffiti and artwork evolved to be what it is today?

If I look back and see myself retrospectively, the truth is that I have evolved a lot through working more on my paintings. Nowadays I feel very comfortable with my work since have various ways to capture my different ideas. I really like abstraction and minimalism, I play around a lot with my view of the world when I paint, and all the time I keep reducing elements.

Your new serigraphy made for Art From Chaos is titled “Ciclope Humanoide”, what does it represent?

This is the second serigraphy I made in my artistic career since I started painting and I wanted it to be a classic character from my animal collection. I always worked with zoomorphic and anthropomorphic forms, at first I did it unconsciously, and later it turned deliberate. This is why I created this character called Ciclope Humanoide. 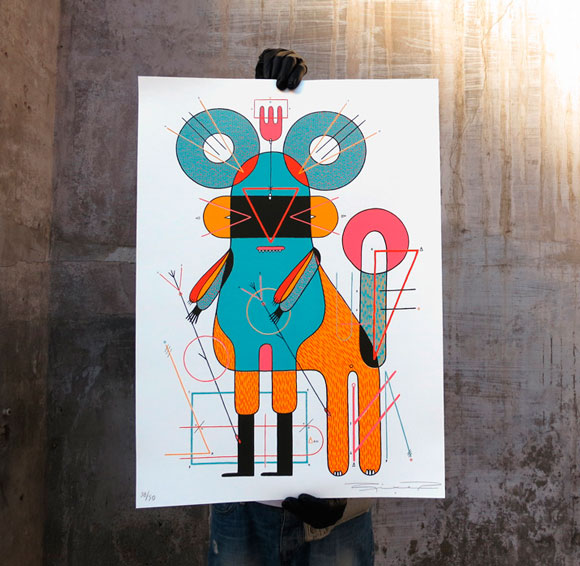 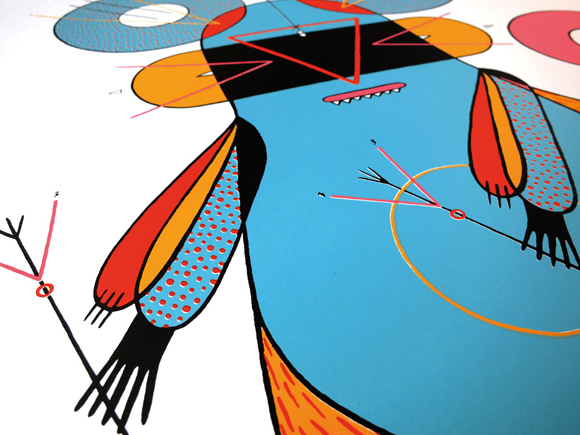 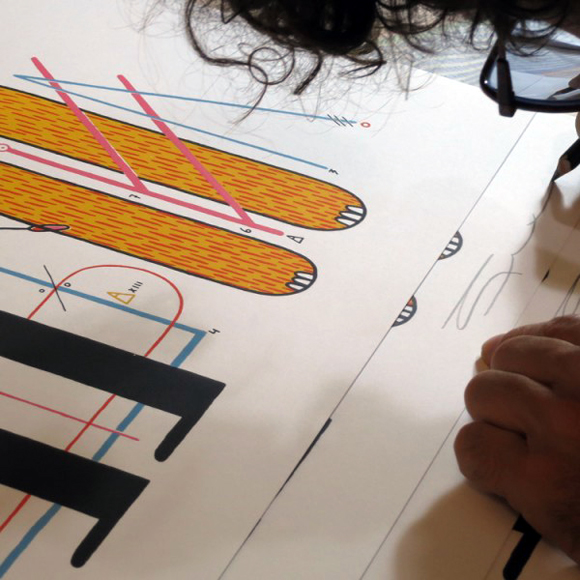 Various individual exhibitions in London and Berlin, some group shows in Brussels and Montreal and two big murals in Barcelona and Brussels. After this I will go back to Nasca to get back to my ceramic work. 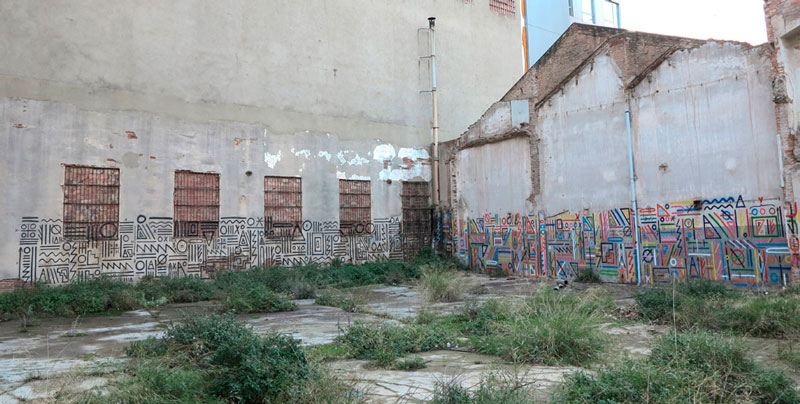