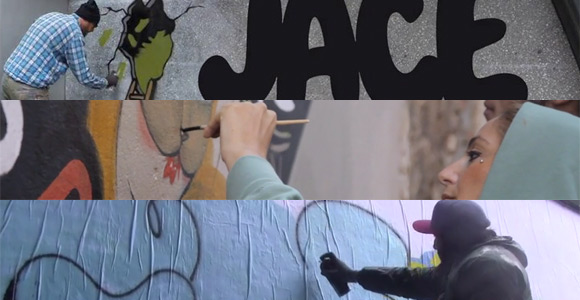 We found three interesting videos which in many aspects has a lot in common: all three presents big names from the french urban arts scene.

Jace is an artist originally from La Havre, France, which made himself quite popular into the early 2000’s. His actions includes a very amusing character called Le Gouzou, which shows up in public spaces with very ironic messages. In the following clip Jace announces his latest expo “DiptyQ” which is opened today at the the Mathgoth gallery in Paris.

When you speak of french street art it is not strange if Miss Van shows up in the discussion. After having lived in Barcelona during its whole golden age of street art, she is back reclaiming the streets of the Catalan capital, even if today is not as easy as it used to be. This time we see her with Boris Hoppek and Rimon.

Tilt from Toulouse is the star of the next clip. Tilt’s work keeps proposing a esthetic reflection of traditional graffiti and the more rejected side of art in society. His presence at the festival Mr. Freeze in Toulouse is coming up this weekend, and according to tradition, he will present a high level of french urban art.