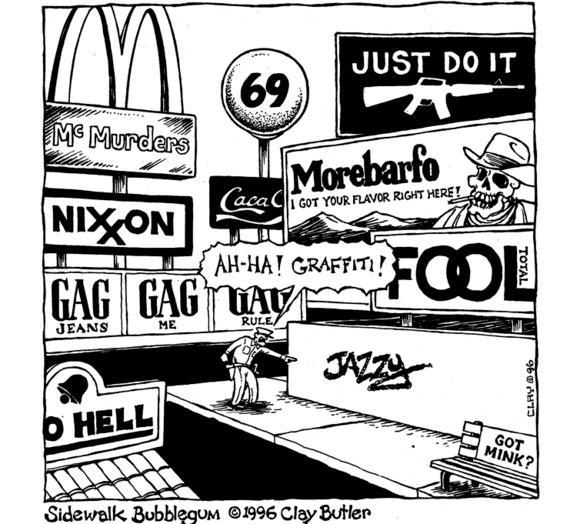 Advertising is a form of commercial communication that shares one basic thing in common with graffiti: visual presence within an urban setting. Actually is funny to think that the graffiti writer’s objective is no more than to “advertise” their name in the same way that advertisements utilize visual  “bombardment” to reach their audience. As a result the concrete surfaces upon which graffiti and advertising often coincide, develop a sort of involuntarily competitiveness between one another; writers paint on billboards and the posters that cover up graffiti, and on subways and train cars that are decorated with ads. 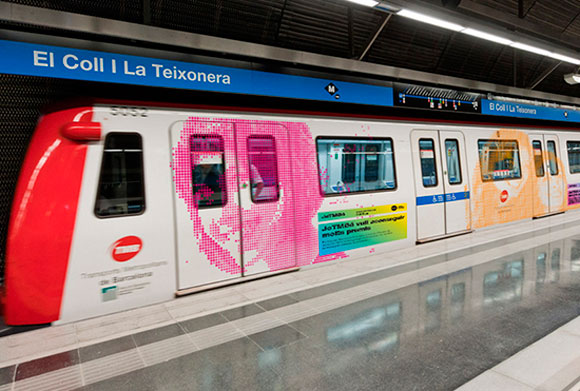 However, the ironic reality isn’t that funny. Both graffiti and advertising contribute to a visual invasion which can be uncomfortable or burdensome to us, yet they are socially analyzed and ethically judged on completely opposite levels. While graffiti is prosecuted and convicted, advertising forms a part of our public decorum and is automatically socially accepted.

It’s true that advertising is visible because of an economic agreement that legitimizes it’s presence; that’s to say, the owner of the surface is “bribed” into lending space to an individual or company and it Graffiti on the other hand doesn’t rely on any kind of agreement and for that reason the surface owner’s intolerance spreads a type of collective outrage that is fuelled by graffiti’s “illegal” label, that so often shocks citizens and media maximize. However, there is no objective way of assessing which of the two visual invasions are more harmful to citizens, without leaving aside prejudices that are often related to graffiti crime. That being said, we must not forget about the fact that advertising seeks to alter the will of its viewers while graffiti is completely harmless. 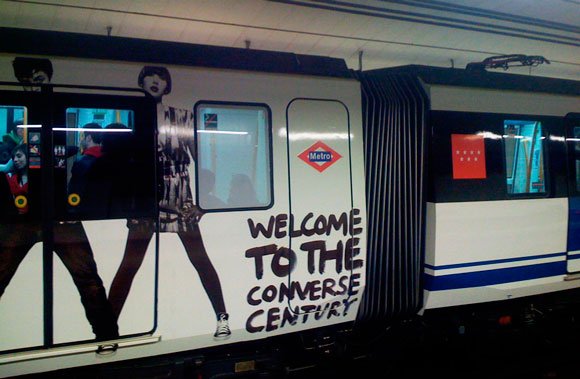 To emphasize the irony of the subject, it’s amazing to see how easy it is for advertising campaigns to appear on the same surfaces upon which graffiti appears (subways and trains), yet how quickly those same transport companies will press charges against the aesthetic changes produced by graffiti. It’s even more ridiculous when the advertisement uses a graffiti aesthetic as in the case with FGC, or campaigns like that of Converse which up until recently decorated the Barcelona metros portraying paint splatters from questionable sources. Taking all of this into consideration, on what grounds can graffiti be punishable for its visual damage? Well, as usual, it seem that all comes down to money. 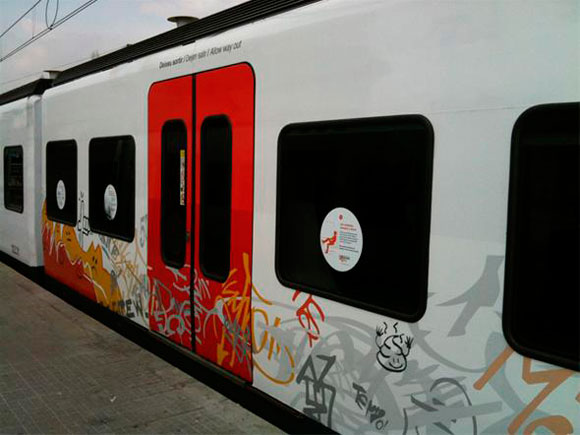