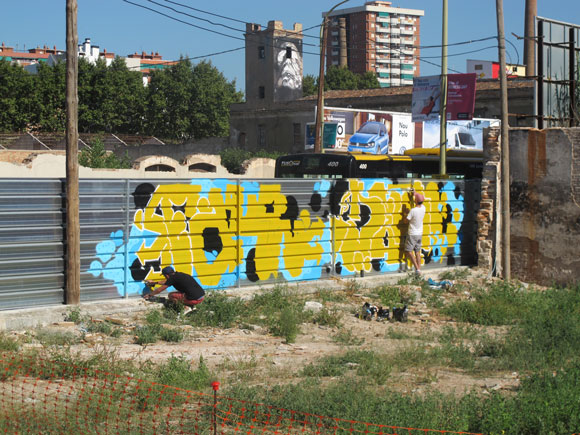 It’s always nice to talk with writers like Fake. Indviduals with a vast knowledge on graffiti, art, and street life. Dimensions that emerge from a radically spontaneous attitude, and this is precisely the attitude which makes it difficult to come across people like this, who can clearly explain it all to us. But what could we expect from the person behind Clark, the renowned magazine that housed within it’s 25 issues the highest quality in urban culture between 2001 to 2012. 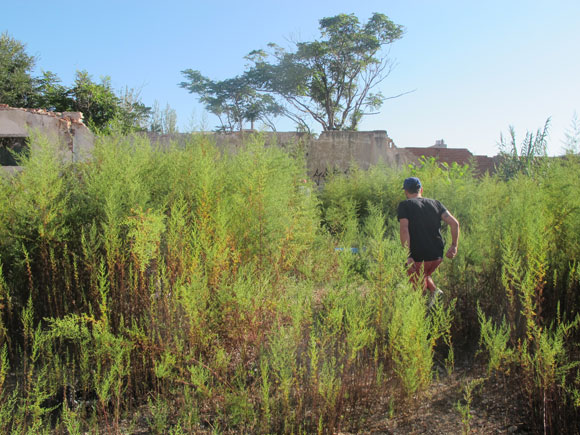 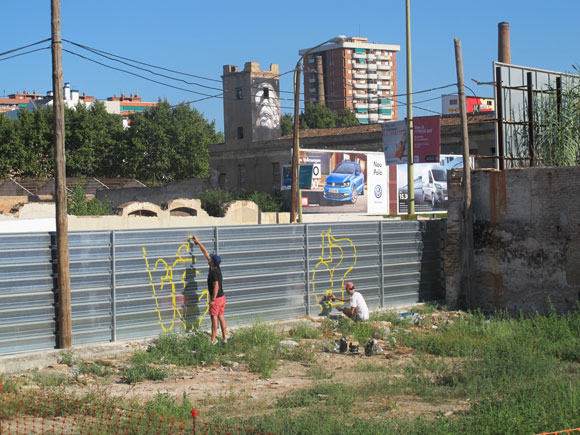 It’s not the first time that Fake visits the Catalan capital, but it is the first time that he’s decided to leave his name on some walls in the city. And it’s not because it doesn’t feel comfortable in these streets. “Barcelona is like Paris but with a beach: good food, parties, good graffiti, and good people…” he explains, although he’s still convinced that ‘Panam’ -the nickname give to the French capital by it’s locals- is the most beautiful city in the world.

His buddy Deo is a Avignonais settled in Barcelona who is starting to get around the city as if he was born in Poble Nou. He’s the one who’s chosen the spot to paint, and who’s proposed the color combination that they’re using. The same colors that Blade used in one of his ancestral pieces on the New York metro. In the same way as in art, in graffiti it’s valid to utilize the work of others as inspiration, even more so if it’s the great masters. So in that sense, graffiti is also art, but as Fake says, “street art, art for the guys of the street”, while at the same time he defines it as a selfish art; an art for the egotistical. 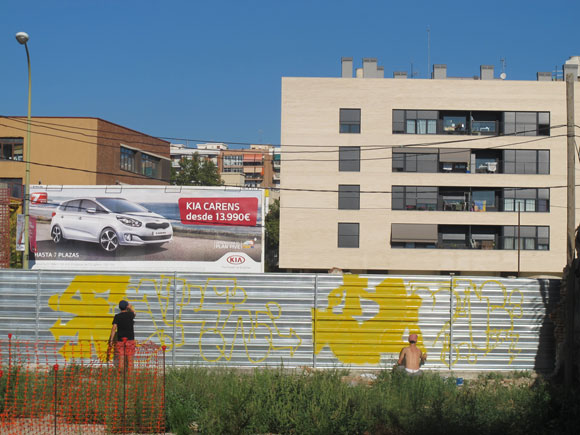 When bringing to light the overused topic of art, we find ourselves obliged to ask him for three names. After thinking about it for a bit, he puts 2Shy in the  number one slot. “A good graphic designer, illustrator, and graffiti writer.” His childhood friend Akroe also appears on the list, rating his work as impressive. In third place he shows us the work of the Belgian collective, Picapica.

As you might have imagined, we flipped to the other side of the coin: three graffiti writers. 2Shy reappears on the list, though he had warned us before. The next is Gorey, highlighting his ability in piecing and tagging, and lastly he mentions Sawe, whom he discovered thanks to the Internet and his very personal style. 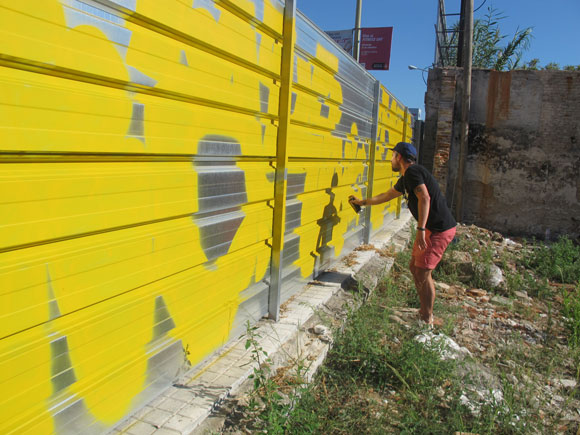 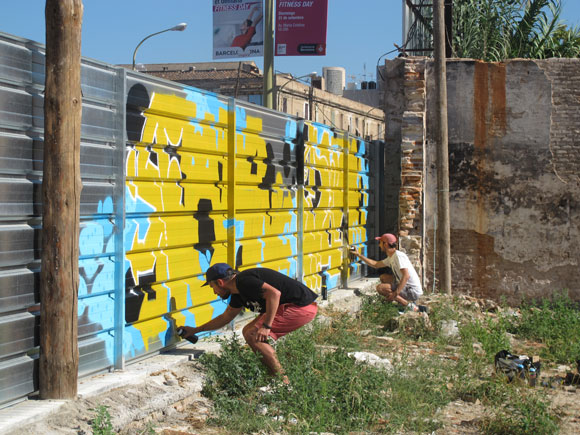 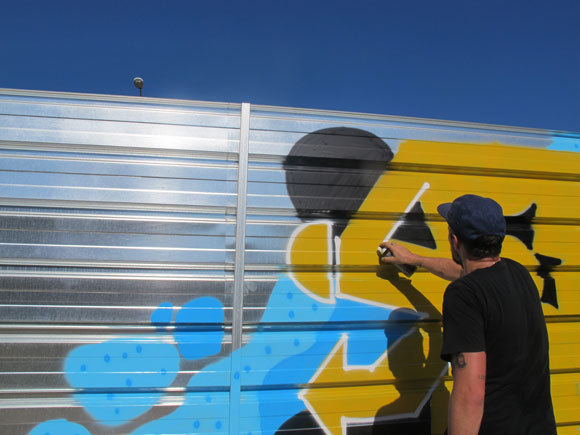 Fake has a style half way between ignorant-original and classic New York wild style. The resulting style reminds us of some of the great names from French graffiti. “I started to paint walls and trains, so I had to paint fast”, is the explanation he gives for the origin of his simple, spontaneous style. However, he justifies the presence of arrows and other details with the excuse that “I’m a graphic designer, and I need to use my arrows”. He also acknowledges the influence from his friends from FMK. “They were very clear on the fact that graffiti is spontaneous; drips don’t matter, one shot graffiti.”

And speaking of drips comes the issue of using Pocket caps, which allows for a vintage looking outline, something that has become a trend in the recent years. “I’ve got a friend in Los Angeles who says that ignorant graffiti is hipster graffiti.” Of course, within graffiti trends exist whether we like them or not, and end up establishing some sort of paradigm for good taste. Nonetheless, the key is to achieve an adequate balance between good taste and originality. There’s no better example than the pieces that they are painting; using the same colors that Blade used, but executing them in their own styles. 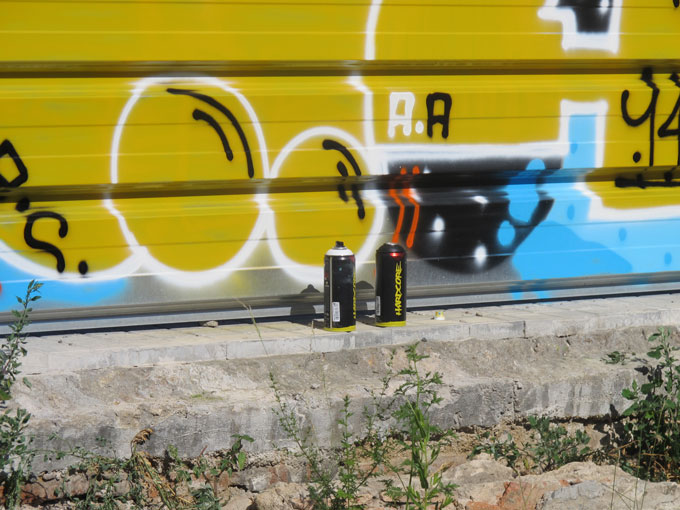 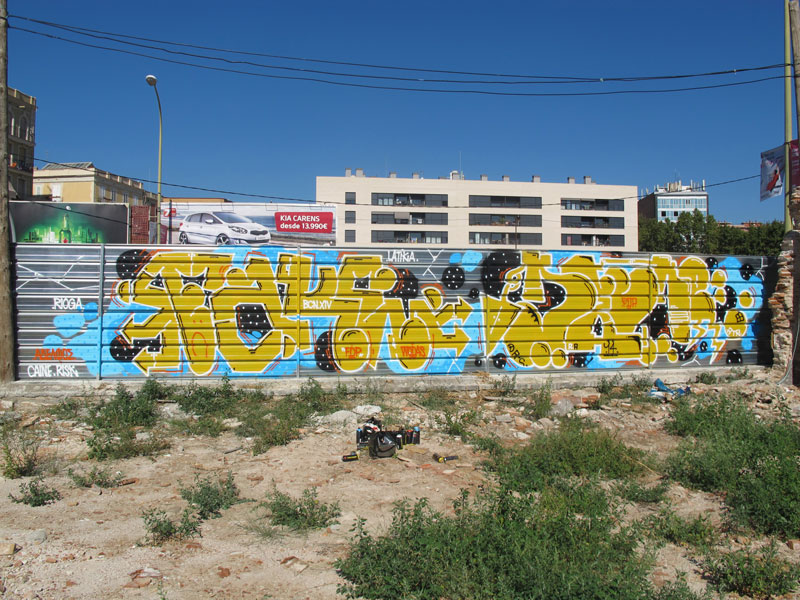 After much talk, finally we had to ask him where he got the name ‘Fake’ from. “I chose it for its letters, because I’m true, I’m not fake”, he says. Although he also admits to having a bias towards names that don’t leave him feeling indifferent; “My first tag was Pute (whore), I suppose I like words that grab your attention. Imagine the judge when they asked me, ‘But you paint Whore?’”, he explains in one of his anecdotes. Anyway, for what it’s worth, he definitely hasn’t left us feeling indifferent. 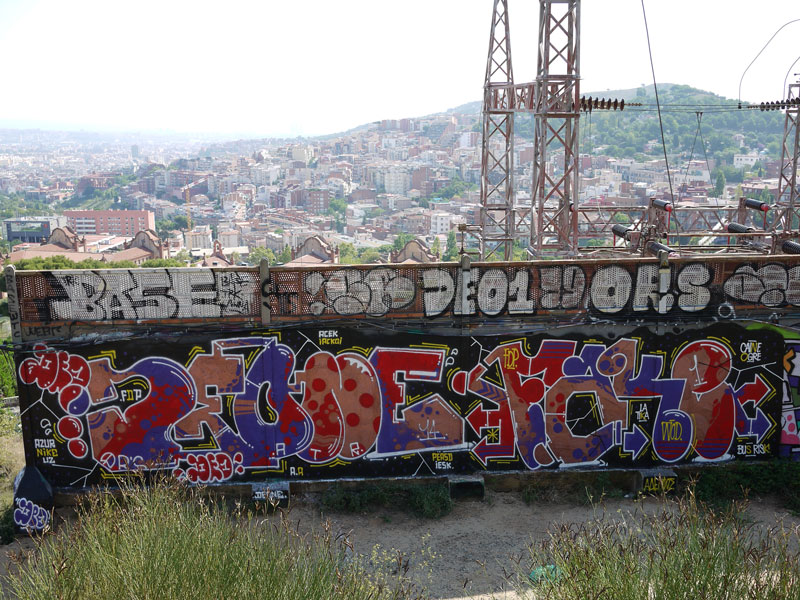 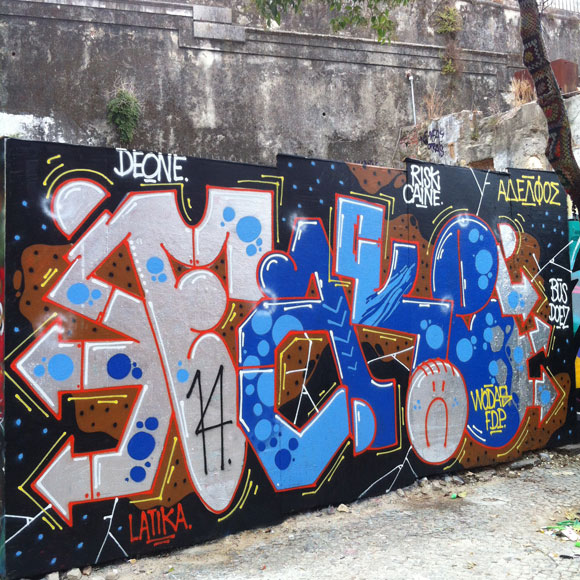 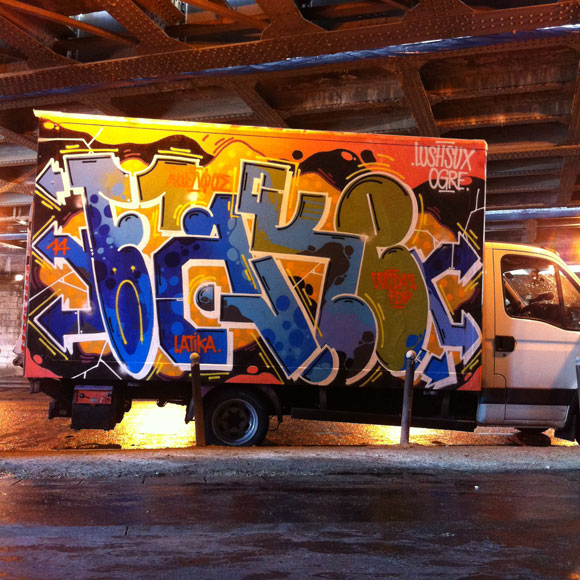 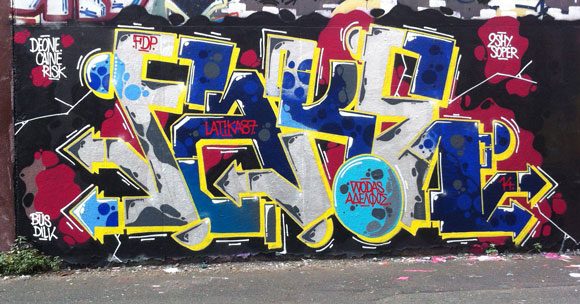 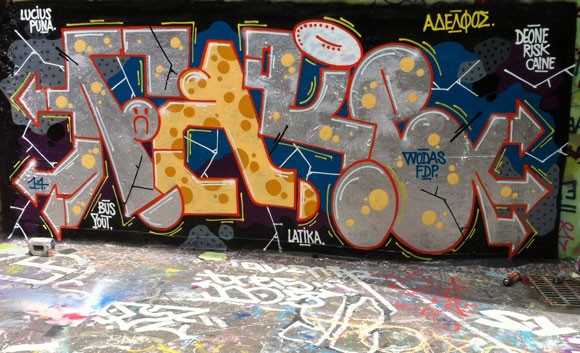 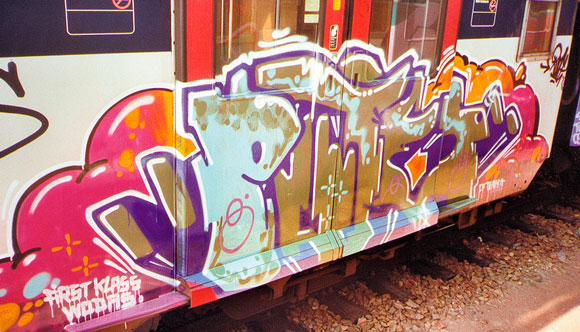 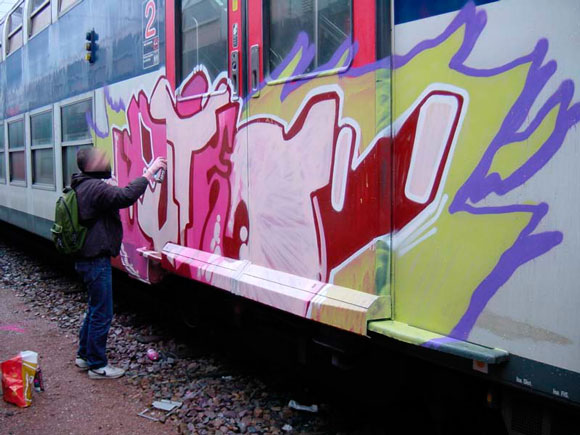 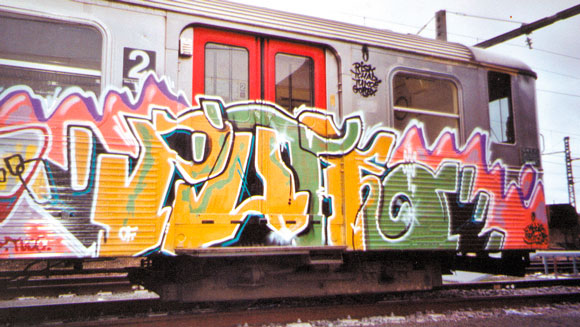 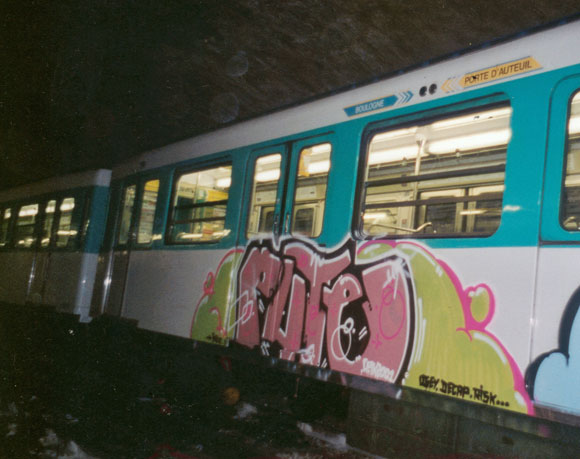 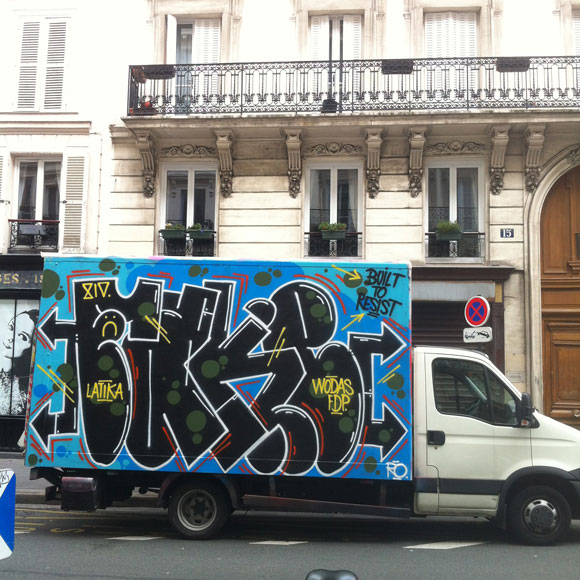 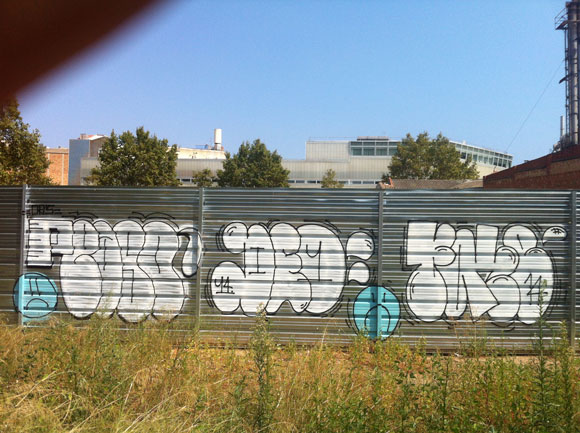 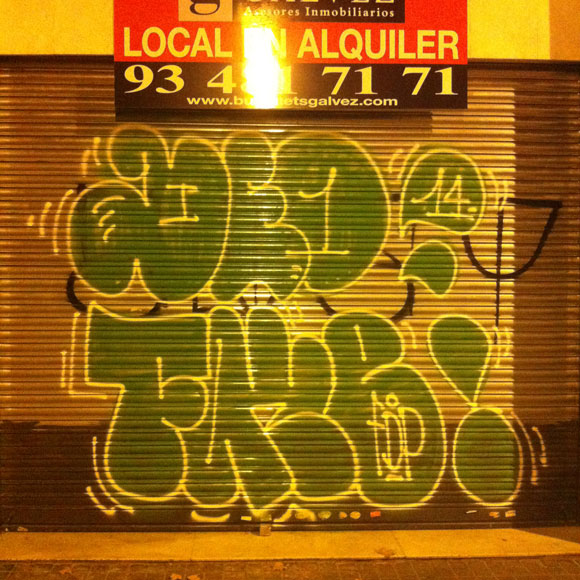