SHER AKA ZIPPO, ‘ALL IN’

We’ve taken advantage of the Cantamañanas Festival to approach the Zaragoza writer, Sher. Since without a doubt we’re talking about one of the greatest representatives of Aragon (Spain) writing, we thought it would be appropriate to ask him a few questions about his personality and his graffiti. So here are the interview with Sher, aka Zippo and enough photos of his work to sink a battleship. 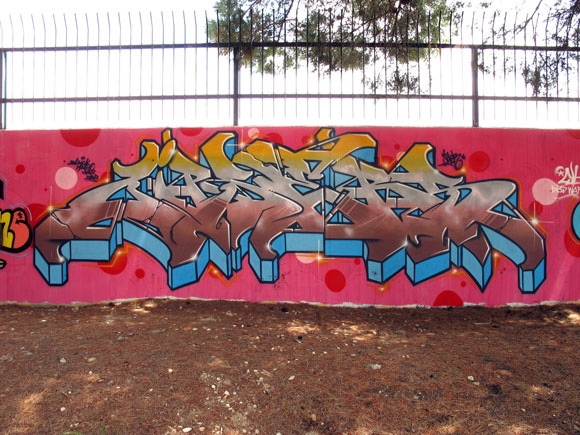 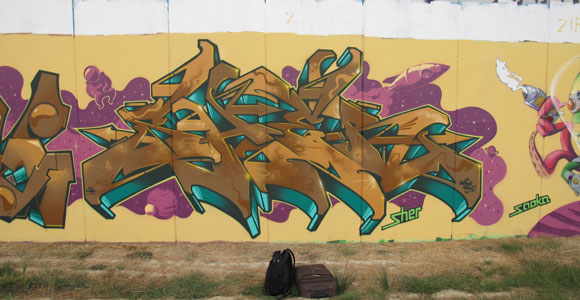 How do you create your letters? Where do you start?

Depending on the occasion, I have two types of pieces. One is a solid piece in which there shouldn’t be any hollow areas and that has to be balanced. The other has to have a more sophisticated, elaborate, and moving appearance. Or the composition has to adapt to a specific space.

Generally, I don’t like it when the piece has too many hollow spaces. I like when they’re balanced and not static. I like tic-toc letters that tilt and move, and that are in harmony with one another. 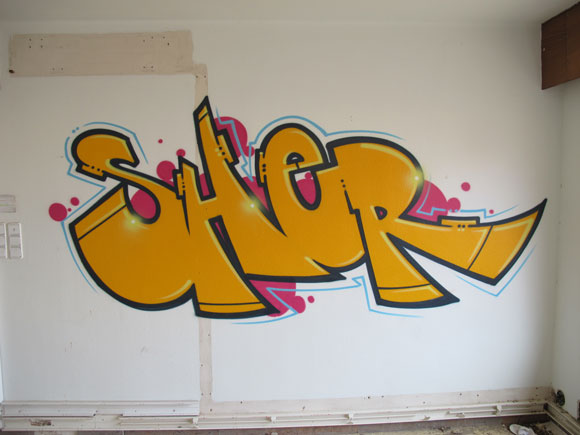 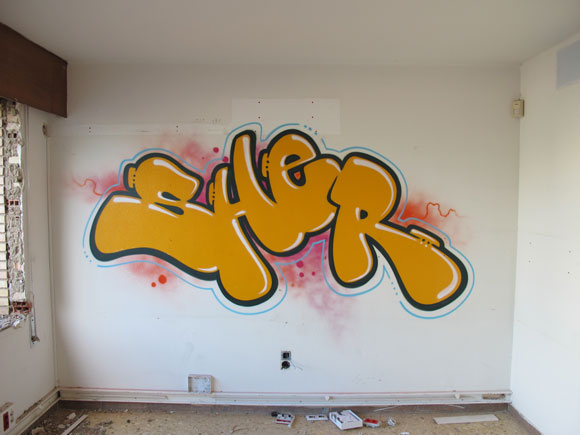 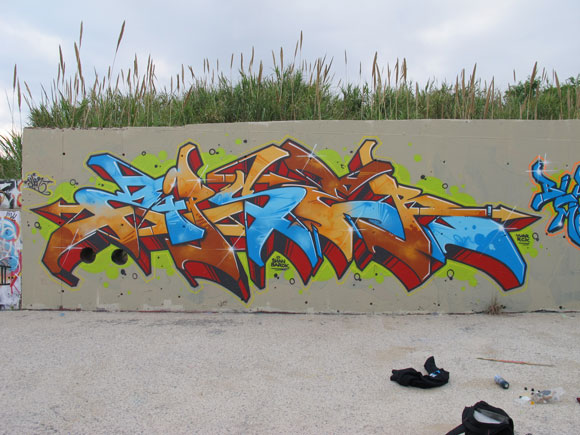 Within your style, what do you think differentiates your wild style from that of others?

Well man, I think in general my wild style has a lot in common with other wild styles. Maybe mine differs in that even though my pieces are blocky, I always try to break up the blockiness with something that generates tension, movement, and breaks up the overall form. Although in general, I follow patterns that are quite classic. 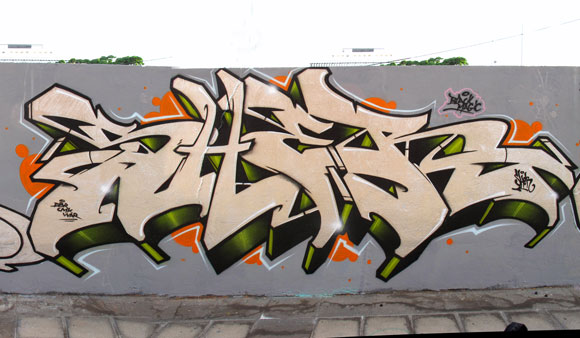 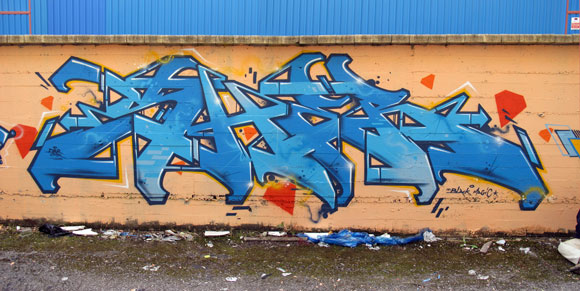 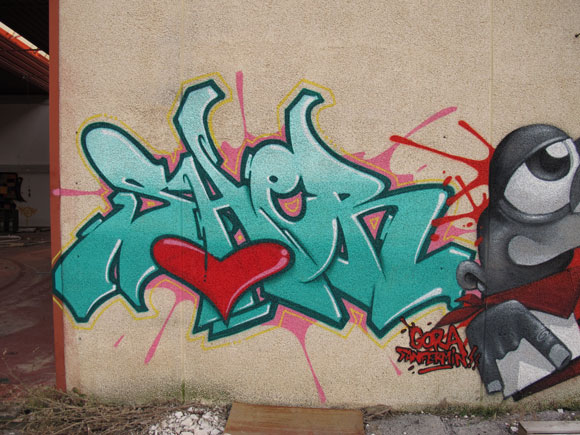 Within this very style, what is it you don’t agree with?

My idea is that a letter has to be pretty, a well shaped letter. A lot of people entangles the form until its lost, and then it can’t be recognized. I started out making simple letters and kept evolving them until they almost couldn’t be read anymore, with quite savage forms. I still like the fact that even if it is complex, you can still find the letter. Many times people hide their letters behind accessories and effects, and when you look at the letter in its naked state its ugly. I don’t like this. 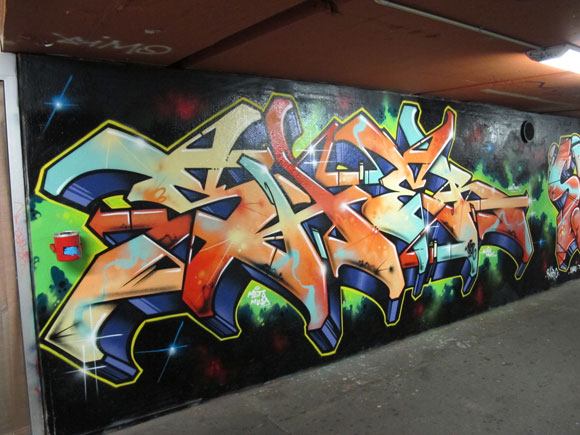 If you didn’t do wildstyle, what other type of style would you do?

Simple letters… classic ones. It is what I liked the most when I started painting, just to give you an idea, the letters of the cover of ‘Rap in Madrid’ (Classic rap project from 1989 in Spain), which didn’t have anything in particular, but at the same time they had style. A really cool type of flexibility. This is what i would like to do. 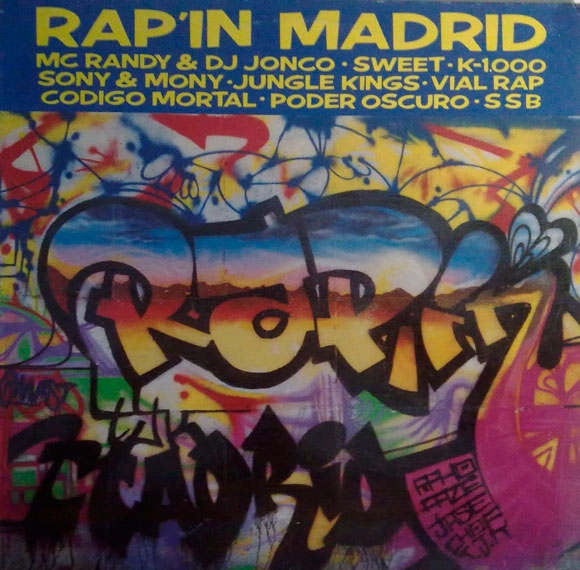 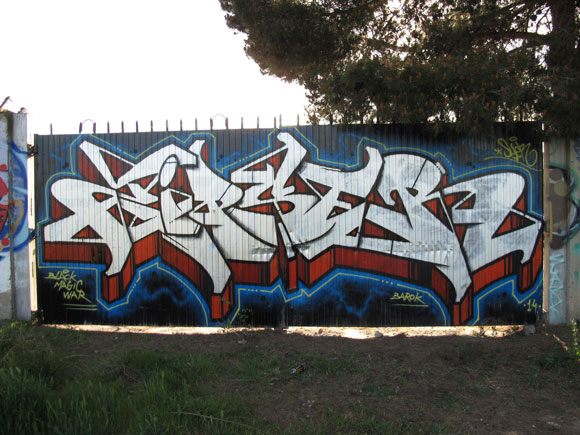 Its funny that the first reference I had, or at least one of the first ones, was seeing the video of Kid Frost’s “La Raza”, where Hex from La is seen painting… the stuff he did was so different from everything else I had seen before, an amazing wild style. I still think he is a unbeatable artist today, and have in mind that he did this back in 83, 84… Later when I got my hands on Spraycan Art and got to see all the classic styles I was blown away. 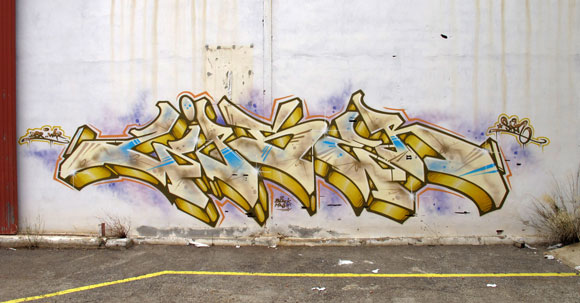 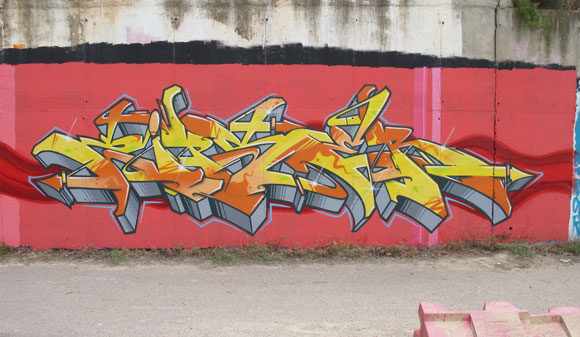 Why did you start painting, and why do you continue doing it?

In the beginning it was a kind of game. In my circle of friends I was the one who did tags, the one who painted. I also saw things by other writers, other tags which I found funny.  I didn’t really know why I did it, but I kept doing it and got more and more hooked on it. I still paint, and I think I do it because it works well with who I am.  My way of living is made for this. 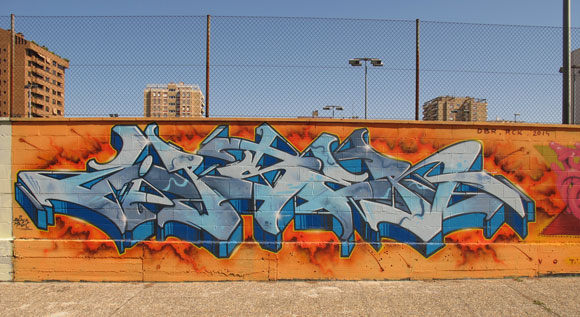 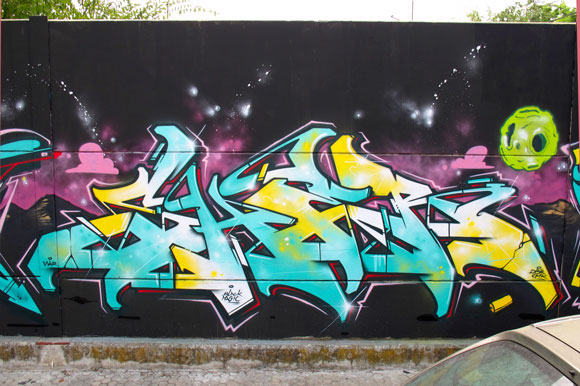 What people surprises you on todays graffiti scene? Who can stimulate you in what you do yourself, and why do you like their productions, even if you don’t belong to the same style?

There are no names in particular, but the attitudes of some people, people who are beyond the whole “fame” thing. People who just paints without any regards to all the rest… they write their name, and they did so for years. People who don’t care about coming up in media, and keep doing it no matter what. This is the perfect example for me, it inspires me. I don’t like when people use graffiti as a way of getting fame. People who paint to fulfill themselves, those ones which pieces you know of, but you don’t know nothing about them as people. 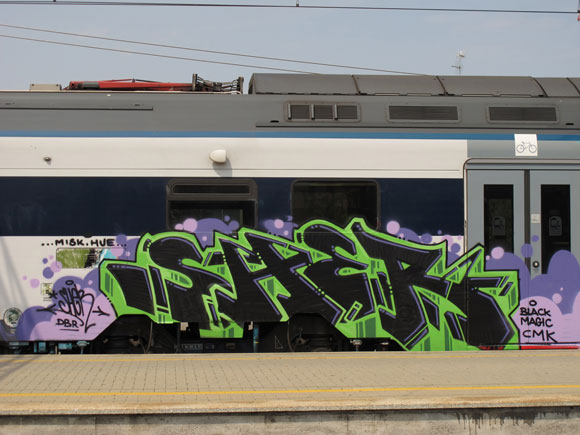 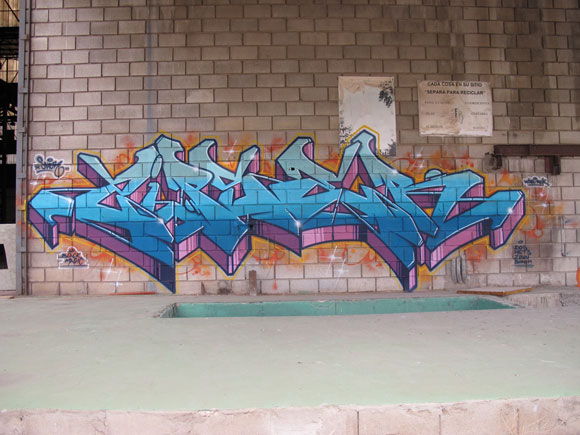 Before you didn’t use to sketch, and now you do… how come?

When I started painting I did a lot of Sketches… Later when I grew up and had to deal with the typical things in everyday life like work and responsibilities I didn’t have the time for it. I also went through a period where I thought it was more interesting to not use sketches when I painted. Adapt to the wall and create new things in a more spontaneous way. Later I kind of got stuck in my style and started sketching again, to get more drive to it, for renewal. 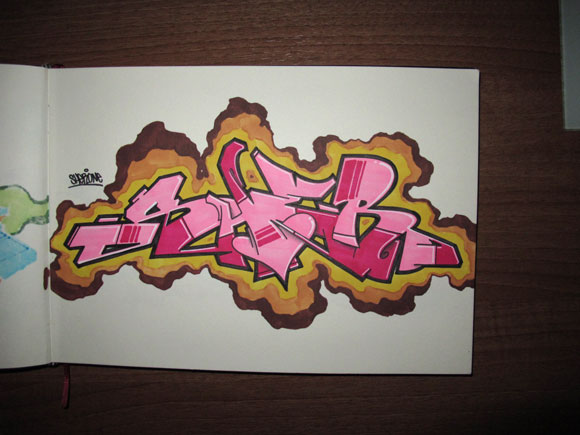 In what would you like to improve as a writer?

You can always improve, and you have to learn from your mistakes and make progress. If there is something I really need to improve it would be my throw-ups, I would like to have a nice one. Mine is very simple. I have to work more on it. When it comes to hand-style I like my tag, but I don’t have a lot of ease with the rest. I could definitely work on it a bit more. 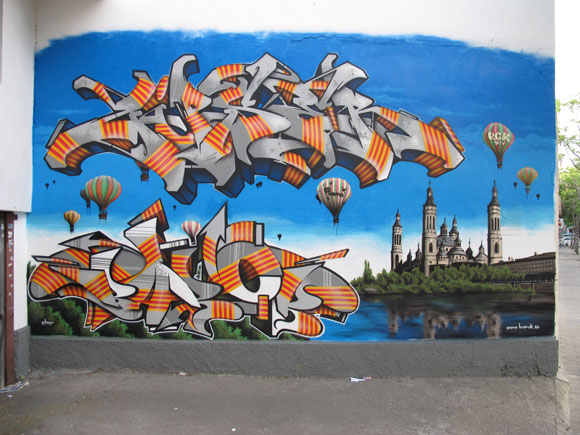 I started writing my name in my neighborhood in 1989 and shortly after I met the first writers in the city. I started a crew called SP (Artist  Street Posse) with Psico which was formed by many of the early writers in the Zaragoza scene.

Later, I got into Horo crew with my friends from Lleida (a city which is without a doubt very important to me) which signified a crucial step as it was my first connection outside of my city, and above all because of it’s proximity to Barcelona and ties with people from there which allowed me to leave tracks in more places, to learn more, and tempted me to develop my personality more within graffiti.

After that, my local crew became the quintessential LPA (La Pequeña Aldea-The Small Village), now disbanded and for which I hold the highest respect and affection because it was with me for a big chunk of my career as a writer.

Since a few years ago I was part of Black Magic, a group of classic writers from various parts of the country. This gave me a boost of energy in order to continue forward with more desire than ever. I’m also part of DBR with my Pamplona people, a crew with which I always enjoy doing very elaborate productions and who have been like brothers to me for many years.

CMK is another crew I belong to, with the editor of La Charcu Magazine, and with my people in Vitoria and Logroño. With RCK I stay close with my Galician and Madrid clique. And lastly, WAR (We Are the Robots), a mix of writers from Seville, Vitoria, and Zaragoza with whom I have a granitic graffiti rhythm. 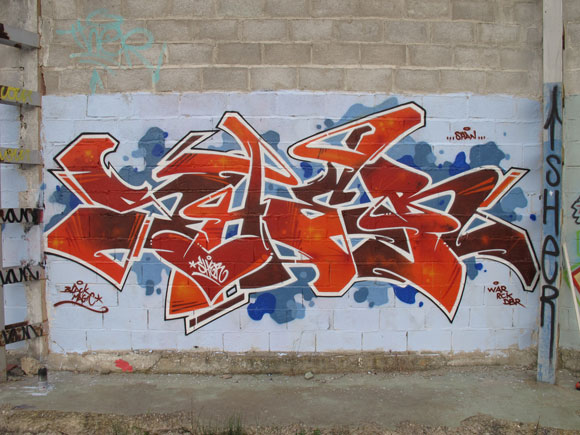 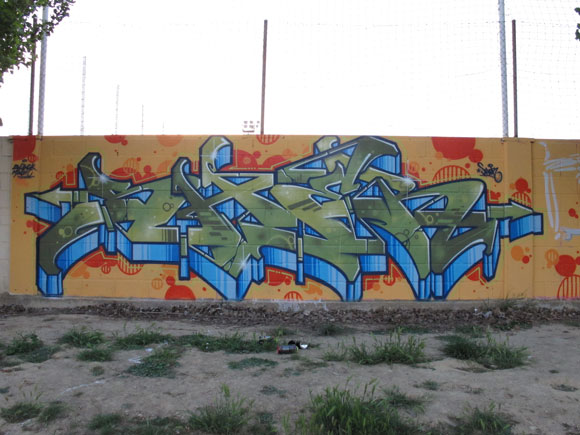 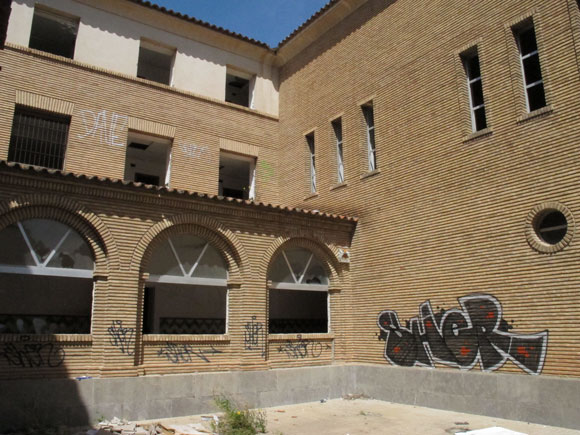 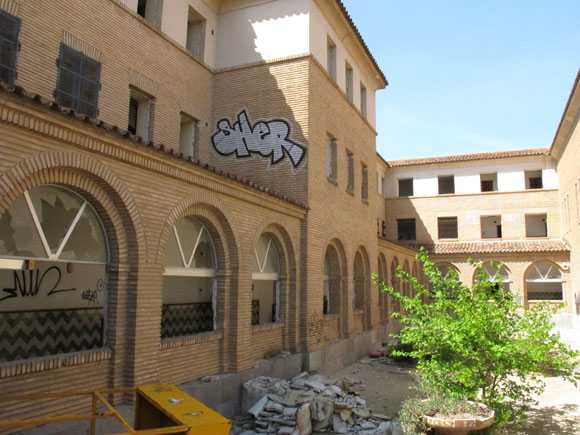 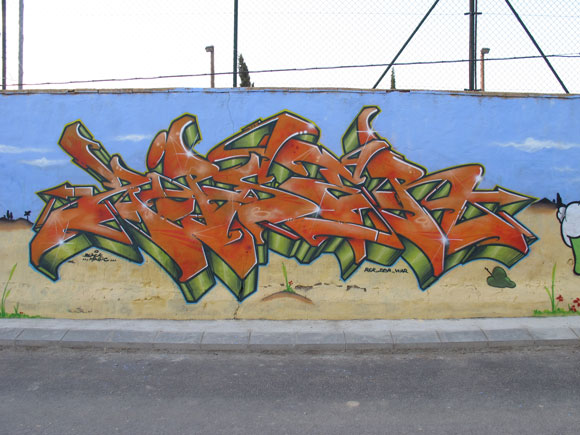 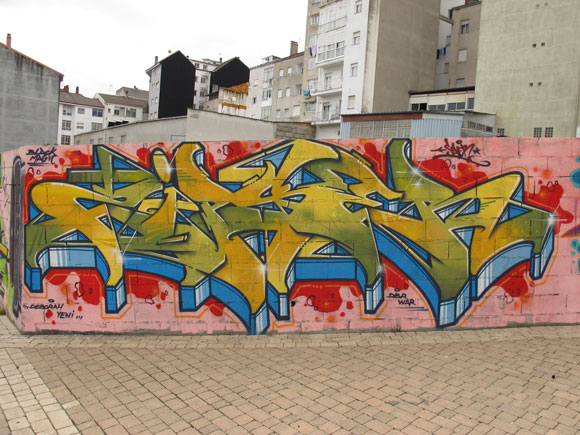 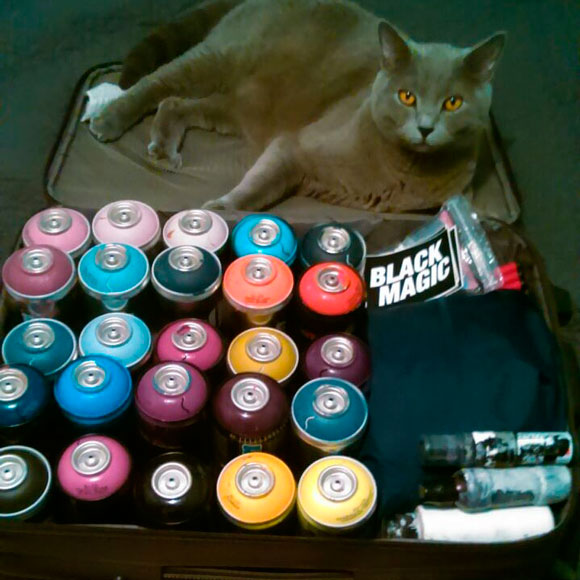