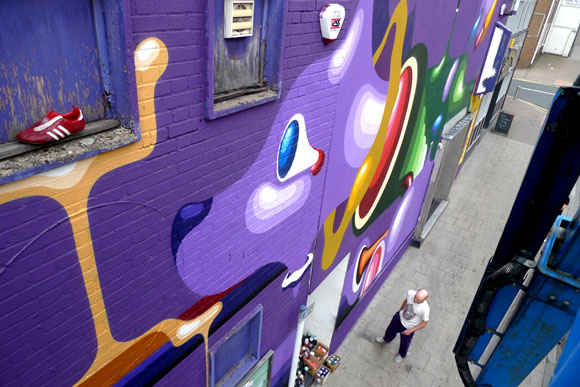 After having seen photos of a mural intervention on the blog of Krek we decided to ask this british graffiti artist some simple questions about the project.

-Tell us about what is ‘News Horizons Project’?

New Horizons is a project set up by Entrepreneurs -Who are local Stoke on Trent good guys. For the project they organized 2 large inner city murals to be painted in Stoke. One by Will Vibes and the other by Me. 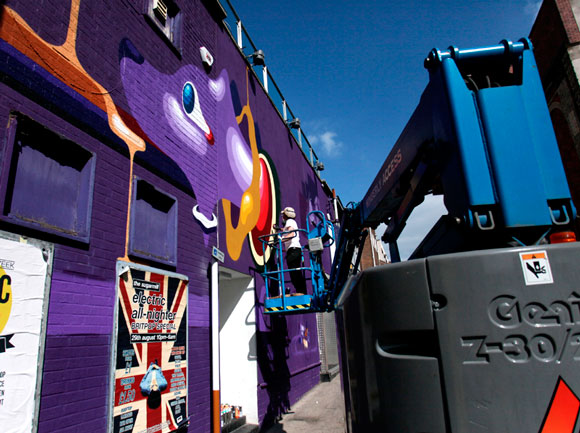 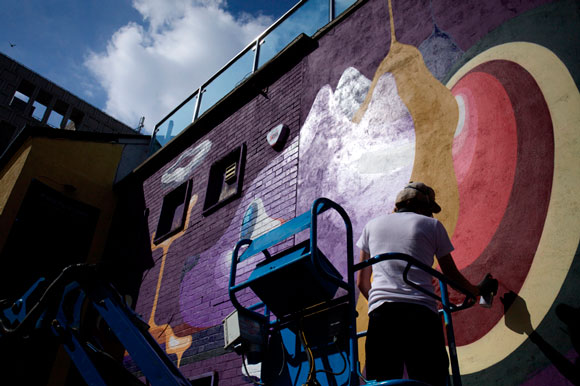 -What kind of building you painted?

The Building I painted is and old Infamous Nightclub called the Sugarmill.

The only brief had from them was that the building has always been predominantly Purple, which  was an interesting coincidence, as for the past 2 years I have been working on a new concept / character which will result in a large exhibition about an alias I have created called ‘Frankie Purple’

I’ve been working a lot with the colour purple and its deeper meanings and representations over the past 2 years. Then combining this with the other elements and ongoing universal themes I have also given to this ‘Frankie Purple’ character which you are yet to hear about… 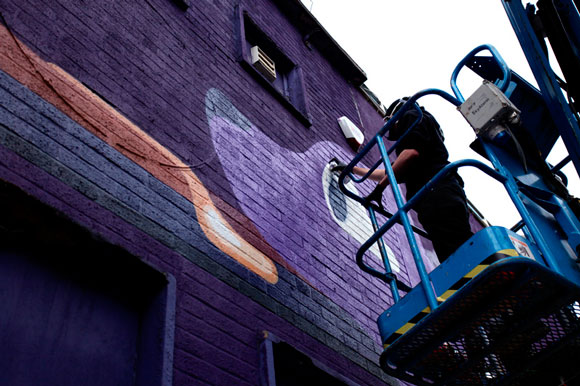 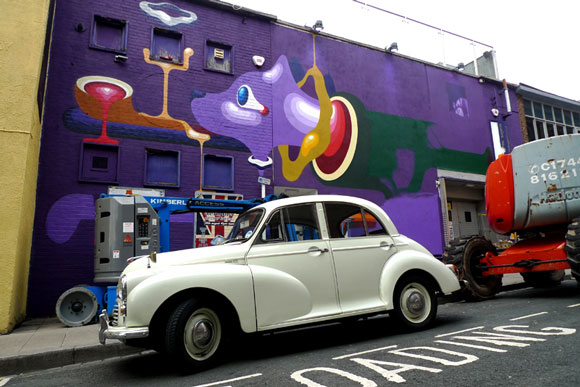 -Is there any relationship between your artistic drawings and your graffiti letters? How can we see it?

Yes, hugely. Ever since I started doing graffiti and I’ve always tried to put as much of myself and personality into it as I think that’s the most important element to having an true and original style.

So on a basic level, the relationship for example visually is very similar. Working with line, Flowing curves, simplicity stripped right down runs through both all my art and graffiti. I think there’s an ongoing form/shape that runs through all of my work that can be easily detected. From my tags to a piece to a character, painting or large mural they all have visual similarities.

Sometimes I kind of try to think well if a Krek letter piece was real thing and had hands how would it draw a dog or a person in that style? Then maybe how would the same things but  without outlines etc… But sometimes using my Krek/graffiti style might not represent best a more serious subject or an idea for a panting. So I basically just choose the tools/different styles I work within to best fit whatever it is I’m trying to convey visually… 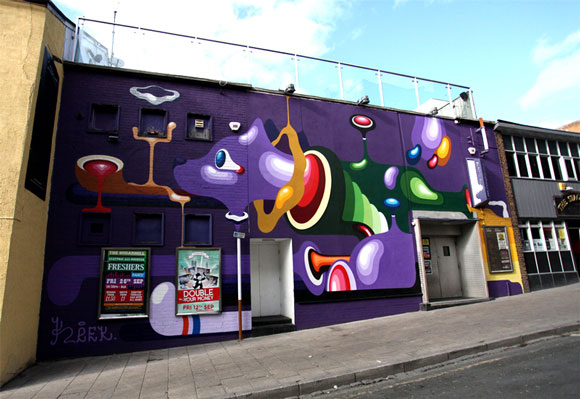 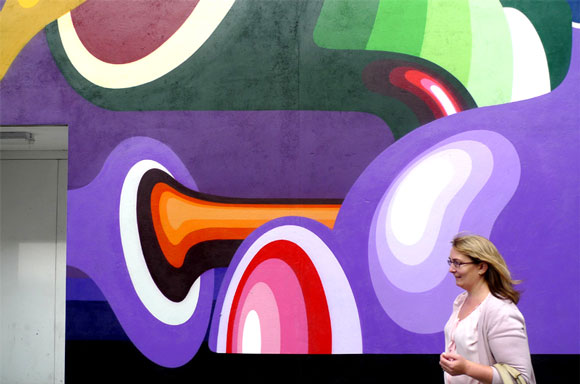 -Whats the meaning of the representation?

Well to be honest the mural was a complete freestyle. This year has been a crazy year for me to say the least so as usual I came unprepared… I repainted the whole wall Purple as it was looking really tired and began deciding hows best to approach the wall. As it wasn’t a flat even spaced area -there’s like boarded up windows, doors, signs, posts, shutters etc that break up the space- I try to thing whats going to ‘fit best’ on a space like this.

In all my work there’s meaning and small hidden messages that mean more to me that to the viewer. That’s an ongoing thing in everyone’s creative work… A small page in the ongoing visual diary I guess… 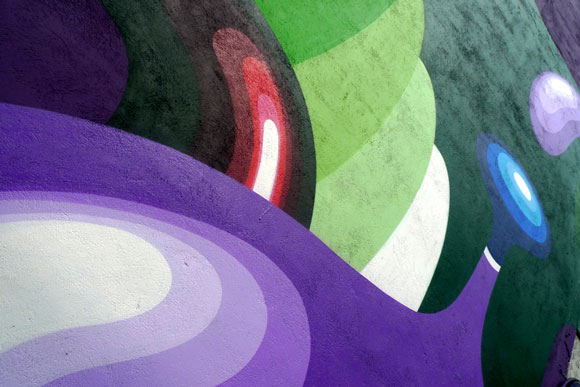 But briefly this strange free styled animal dog/cat/fox looking thing is loosely a representation of how I’ve been feeling and what i’ve been doing lately. The start of the animals body is a subtle reference to a watermelon, which to me represents a lot of things.

The watermelon is a worldwide gambling symbol like the cherry or bell etc and I associate it with Manchester on a number of different levels too. For example a watermelon is hard on the outside and soft once your In. It’s also a classic ‘Happy Mondays ‘ Manchester music reference too.

It’s got Red with black seeds inside which makes up a ladybird colour scheme which is another symbol I often work with again for a number of different reasons. So yeah I think of all kinds of good shit whenever I see or eat a watermelon which is one of the reasons I’ve been including them into my work for years.

It’s also looking directly at the security camera which is to do with every writers awareness of being followed or watched / being wise to what’s going on in the street, and  the old tired worn out red adidas shoe which I told the owners ‘i found and put up there’ is actually one of my own ‘Sonic the Hedgehog’ trainers reminding me to slow down as i’ve been running a little to fast that even my shoes are showing their age.. 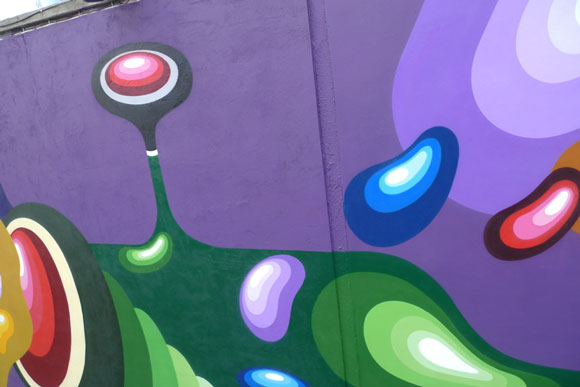 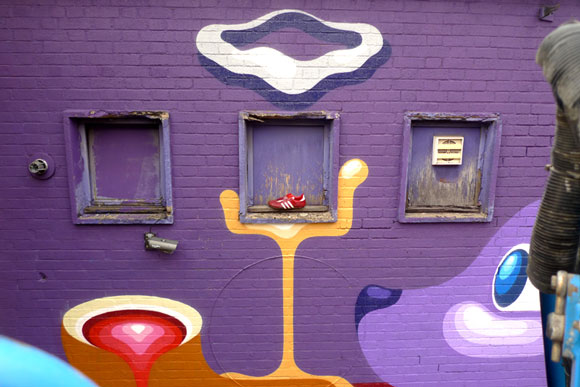 -What will be the next by Krek?

As I say I’m working a lot towards this ‘Frankie Purple’ exhibition I’m gonna do in 2015.
I want to do exhibitions in a different way, I’ve been too and been part of too many whack shows where not enough’s put it and it shows.

I’ve been working, painting, thinking and living in the concept of this Purple Wheeler Dealer, Gambler, Alcoholic Rambler and actually getting the ideas,stories and concepts for paintings and overall theme for the show.

For more about this and new works before the show visit Krek’s Blog.