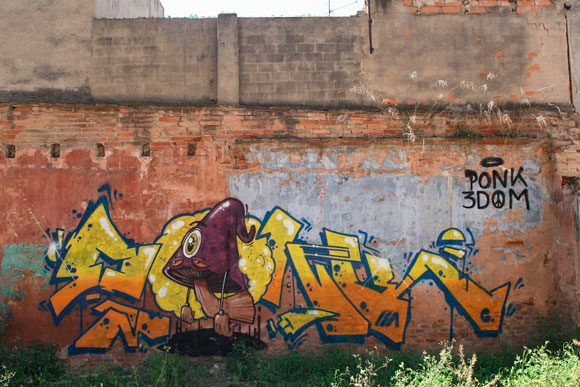 Heavy Artillery crew member Ponk has good stuff to come. But at the moment, we found this series of pieces and sketches made under the alias Curtis particularly interesting… We met up with him to ask him some questions and let him explain this duality and show us around in the universe which surrounds his graffiti. 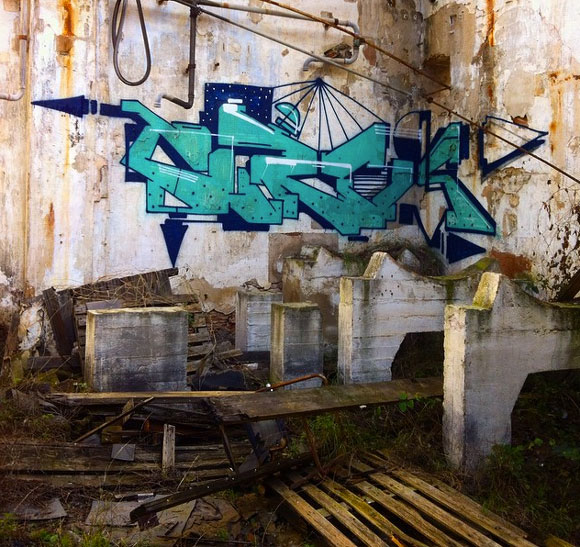 The pieces by Ponk which we are known to stands out due to its truly pleasant balance: Somewhere between simple styles and wild style, very precise structures and cuts with spontaneous forms. Can you explain to us how you got to have this style?

For the past 2-3 years I’ve been doing a style that’s been very easy for me to do… very fun, very spontaneous like you said. It’s much more fun. Sometimes I don’t have time because I’ve got my son, so I can spend half an hour, one hour on a piece maximum, and it’s quicker, it’s fun, it’s one color, it looks fresh on the wall. Usually I try to find a space where I don’t have to worry about the background with emulsions and all these things.

Did you always use the same style for your Ponk pieces?

No, I suppose they began to simplify because of time and because of the environments that they were in.

Was your style more complicated before? 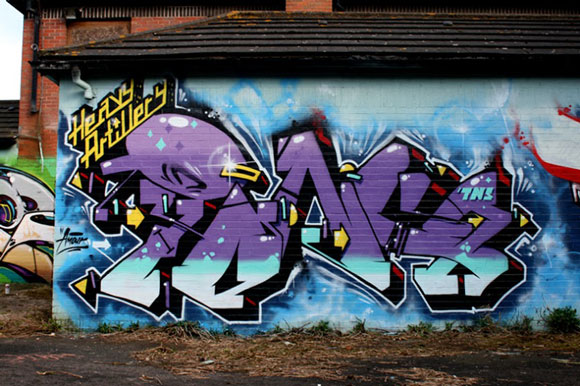 Has your time in Barcelona been a influence to this change?

It started before changing to become, to look for new environments, but in Barcelona it’s like the most perfect environment for me because I like abandoned spaces and I like to find places where you can think about the environment and the walls and where you’re going to paint. For me it’s the perfect place.

Which type of graffiti do you like looking at?

I don’t know, it’s difficult to say because I can think of everyone, there’s so many people. Lots of my friends in my crew are some of my favorite writers. Even Aroe, I’ve been following what he did for a lot of years and I’m trying to think of other people. Some of the people who I’ve mentioned in the past, who I grew up watching from England like Paris and Eko both from the TCF crew. They somehow painted classic graffiti but in a much more expressive, free way. And which when I was beginning to paint helped me to think about a way in which you can paint graffiti that isn’t just painted letters with 3D, and highlights, and an outline, and a cloud. They would break those rules and I learned that from them from the day I started to think about painting graffiti seriously. So they were good people for me.

In the pieces of Ponk we can see a great dose of freshness and spontaneity, and in the pieces of Curtis we tend to see a more serious and sharp style.. Why? …You have the need to make something more complicated and detailed, right?

…You have the need to make something more complicated and detailed, right?

I think just because I appreciate that as well, and when I started graffiti, I used to do that thing. I wanted to do it because I thought it was amazing, to walk to a space and to see something so detailed or so big or so complicated, blew my mind. The pieces that I’d do with Ponk were much more simple, so I still had a need to do the complicated styles. 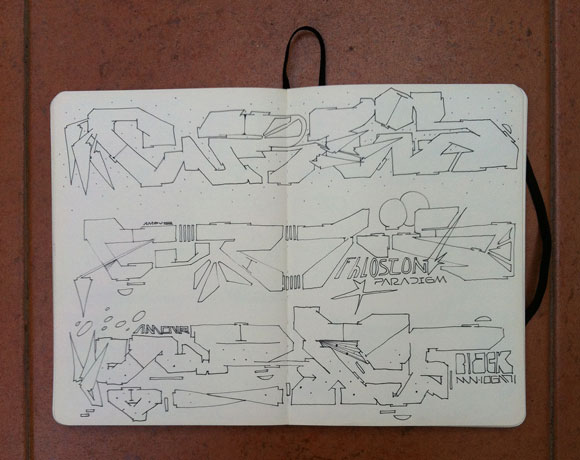 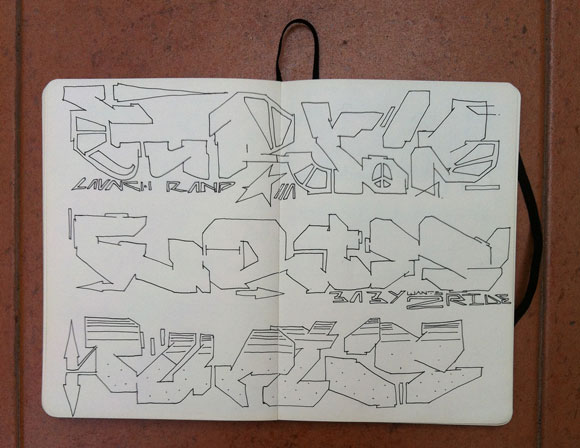 Where did you get the name Curtis?

It’s my son’s name. I didn’t chose the name for him for a reason particularly but it’s just a cool name.

Does this mean you chose the name for your son because you liked the letters? (laughs)

No, but it has cool letters as well (laughs). It works well. 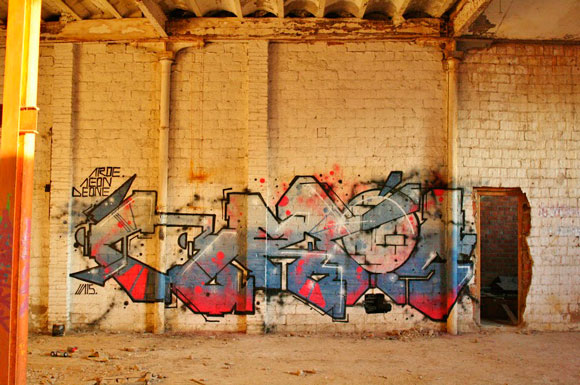 Is there a relation between the sensations which creates your pieces and your own personality?

Yes I think so, with both the pieces. Thinking about this interview and what you were wanting to talk about, I started to make a relationship with music really, and my musical tastes are quite broad.

I have a big passion for funk and soul music. Not really classic funk or soul but more rare soul, northern soul and rare music that is somehow hard to find.

Also, almost on the other scale of the spectrum, I love electronic music and techno music. I suppose the funk and soul has come from hip hop, and from growing up… 11, 12, 13, 14, being inspired by hip hop and stuff and then, learned about the funk and the soul relationship. But when I was like 15, 16, 17, 18, especially in England there was this new techno music, and I listened to it from that age. From the early techno music, and then the English rave scene, and then various related genres like Mo Wax record label -which to me was a bit hip hop and techno together-, and then Detroit Sounds as well.

For me, somehow I could relate the Curtis pieces to techno and the Ponk pieces to the funk and soul. I often can think about music and graffiti somehow together, more than I can other things. It helps me to think about sometimes the reasons why I paint graffiti, why do I bother putting tags up, why do I bother painting every week, every day. And sometimes I think, well musicians do this, they make music… some of the best musicians probably make music every day, but release one album every five years or something… and it helps me… somehow it helps me to think about this music and graffiti mix. 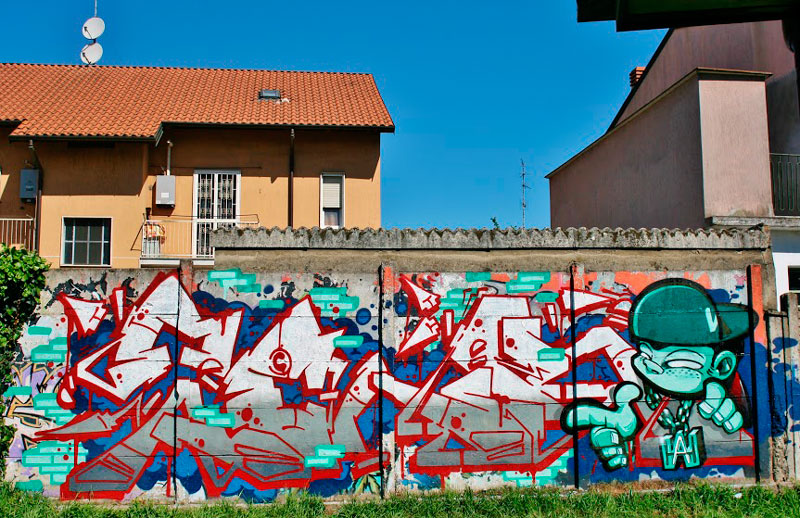 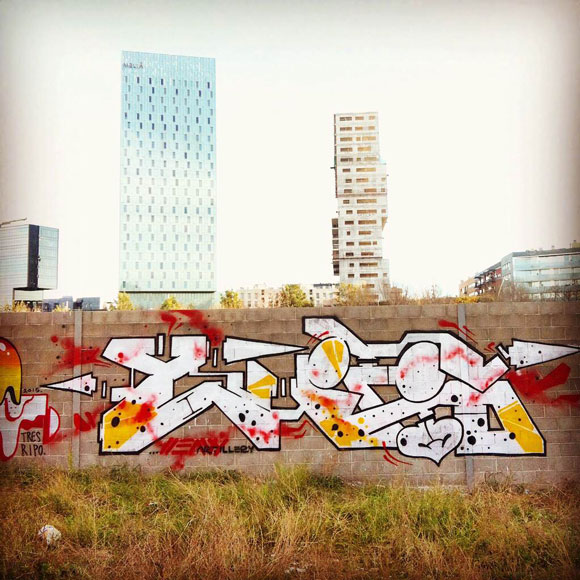 Do you listen to music when you paint?

Which writers inspires your style as Curtis?

I think the Curtis pieces are quite obviously have a connection with older graffiti. I suppose the late 80’s early 90’s. Paris used to paint these styles of pieces. He would always inspire me with these and I learned from him about people like Bando and the crew The Essex Rockers, from Essex in England who did this style. And I often relate it to a very English style but also a French kind of style as well, because of Bando. But then there was a huge, that style of things in London and England in those times in the early 90’s, it was very much like that. There’s been some resurgence of that style more recently. Different people have been doing similar styles and I suppose that inspired me to think, ok, I like this style and I can do something similar.

I suppose somehow but I don’t like to think about it in that way because I feel like I’ve painted pieces like that in the past, before, so it seems to be like a trend or fashion of some writers but I think it’s nice to bring it back as well.

Yes, and also, I’m putting my knowledge of graffiti into that sort of style so it will be completely different, because from the 90s to now, 25 years later, lots of styles have changed and the letters have changed.

style has to be up to date.

Absolutely. I don’t want to try to make it look like it was from the 90’s. I want it to look like it’s from now but with that style and my style. I don’t want to reproduce just this thing. I don’t really like that complete reproduction of a style. Some people paint that on trains, like a 70’s style of train, which is cool, but… everything’s changed, the cans that you use have changed and everything like that. There is a crew I saw, maybe from Germany who seem to be using car spray paint, and doing these kind of 90’s pieces, and really giving it that whole look, which looks amazing, but it’s just a reproduction of that style. Where I’d rather give it a style of now. 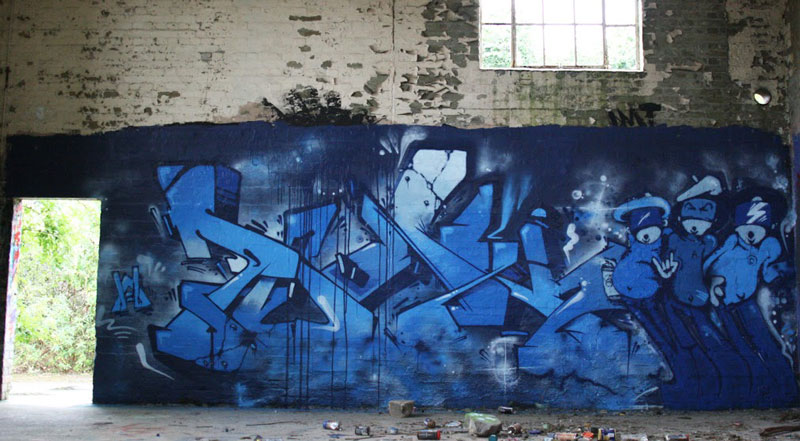 What do you intend for people to feel when they see your pieces?

I only think about other writers seeing them. I don’t think about anyone else seeing them, generally. I suppose I’d want them to like them and respect them…

I think i want them to have a feeling of enjoyment or that I had enjoyment from doing the piece, and I think that generally comes across. My pieces usually look like they are fun in some way, either in a cartoony, comic sort of way, but the line often expresses some form of enjoyment in the doing of it and I think that can be related to the writers that look at it as well. I think they can see that. I suppose for me that’s one of the most important things, that it’s fun and enjoyable for me to do, and fun and enjoyable for someone else to look at. 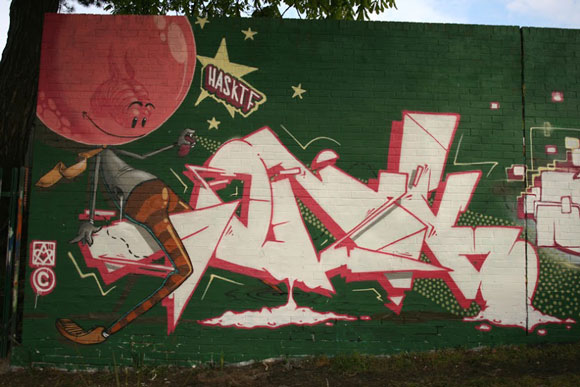 Another thing which really stands out in your pieces is the choice of colors. Where do get your inspiration from?

When I was younger, I thought I had a good eye for choosing colours, but then I began to think, Iwas wrong and I would have trouble mixing colours and putting a combination of colours on the wall. So now I try not to think about it too much, so maybe naturally I choose good colours, or sometimes it’s not than important… because you put the outline on or you put it in the environment and it becomes what it is.

The color of the fill of the piece to me is sometimes secondary to everything else in the environment. The outline of the piece is very important because it needs to stand out off the wall. So for me that’s why just a one color fill often is much more powerful than when you have lots of colours. Sometimes it’s cool, some people do multi-colored outline, with red outline, white outline, and blue and black… which is cool, sometimes it looks good, sometimes it looks terrible.

sometimes it is a distraction of…

Of the piece, of the letters, of the core of what it should be… the structure of the letters, and also of the environment. If you’ve got a nice brick wall, the wall already has colours on it. A raw brick wall is made of red and brown and green and lots of colours already, so this is a nice place already. Maybe just put on a one color piece with a black outline, it’s perfect.

black is best color for lines…

I think you can change that black but you need to have a serious contrast. Black makes the contrast of any color almost. But you have to get a real contrast from the fabric that you’re painting on, and then the fill in, you need to think about those two things. Something needs to make it stand out.

What is the best thing someone has said about your work?

To round up, could you briefly explain the main reason to why you paint graffiti?

For an escape of reality, and somehow the reality of the everyday life in your own head, because when I paint I don’t think about anything else. I don’t have to think about work, or money, or my family, or anything. So it’s like complete freedom from life.