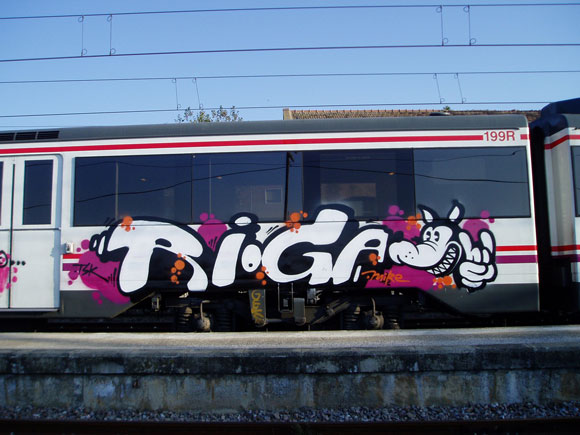 Rioga has given us his Three Aces.

‘I consider this to be one of my best pieces due to two things: first because I only used three colors and it doesn’t need to have more. It is a perfect example of the fact that you can do something good by using very little, and that a piece doesn’t need to be full of effects and details to stand out.

Using few colors on a train also means that you need less time to paint. So the time I didn’t waste on details I spent on adding a character to the panel. The strategy worked out fine and the character came out good, something which doesn’t happen to me on every mission. I even had time to make another piece. The composition in general didn’t look bad on this one of many trains where I had to try to live up to the quality of the pieces around me (Vino, Blue and in this case, Egno).‘ 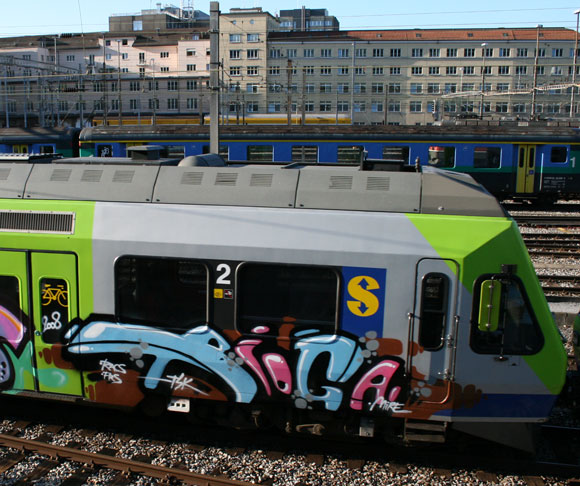 ‘This is one of the best pieces I ever made traveling. The model is a commuter train from Bern, one of my favorites cities. Even if the colors doesn’t match the trains, I still think the piece came out nice, especially if you consider that the pieces you make on interrail trips, due to circumstances, does not usually have the comforts of a wide choice of colors or sketches.

The piece is perfect to explain the trips full of joy and nightmares I made with Muse around Europe. In this case its the sunny side of it, and the action was a real laugh. While doing some extra pieces after a mission we ended up having a mutual laughing attack.
The feeling I get from remembering this piece goes a bit both ways. I remember amazing moments in the city of Bern, during my first travels around Europe…‘ 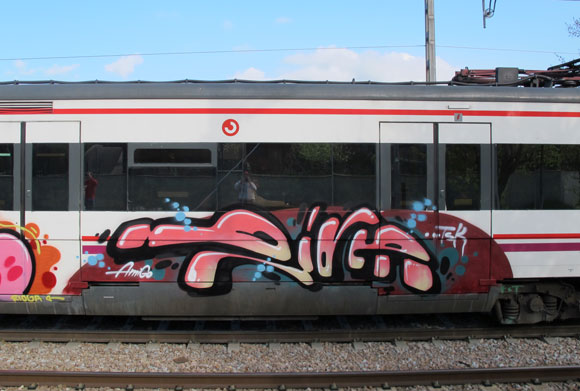 ‘As my third piece of choice I chose this one because it is a great sample of how a improvised action can have better results than the ones which was planned into every detail.

It is the first time I made a piece with a inverted letter, in this case the G. The truth is that the first time you use effects like this, on a train, it doesn’t seem easy at all since you usually tend to fill the letter and do the shadows in the places you normally do, and not the other way around. It requires a lot of concentration, especially in my case since I never sketch up the letters before I start painting. The colors I used where also rests of cans from other pieces and, surprisingly, the leftovers where all good combinations, I believe.
Furthermore I wasn’t even supposed to paint during this action. My role was to stay put and watch over the situation. But at the last moment, my old crew companions of TSK told me that if I could get a move on and squeeze in a ten minute piece I was free to do so. And thats what happened. A great example of solidarity and teamwork.‘