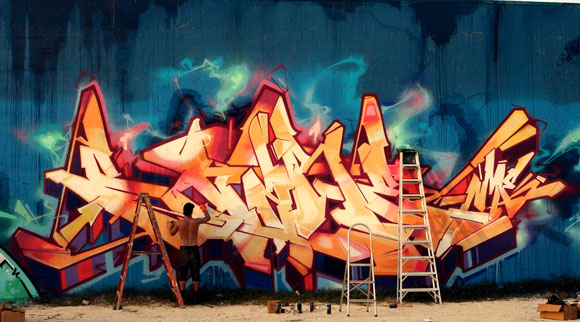 ‘This wall was painted with my boy Scan during summer 2013. We had a great time over there. I particularly love that piece because the overall vibes and esthetic of it. Most of the time, my vision and the result are often two different things. I can say that the final result was pretty close to what I expected. So for me this piece is significant to what is a definition of a good piece. Legible letters structure with style, a pleasant color scheme, few effects and a fresh overall vibes. It’s funny, because when I was packing my cans before leaving Montreal, I chose a palette that was meant for a blue background. When we arrived in Miami, we found this huge already buffed blue wall waiting for us. We jump on it. Synchronicity.’

‘Though I really like the simple esthetic of a two color lettering on a raw concrete wall, this piece is more significant to me for the story behind it. I painted this wall with my French cousin Adyre Nme under the equatorial sun of this island where they were relatively unfamiliar with graffiti. I brought some MTN`s on my luggage, but by then they were all empty, so we found some Julien Décor for the outline, an old French brand, the white was so watery that every line had to be trace a least three times.

When painting, I got to meet so many people with some crazy stories. A lot of them came from the surrounding islands and different African countries trying to use this French territory to a possible door to France. Some were from very far away and struggle with illegal boats to end up there. A big reality check to witness the sad truth of what some have to live due to political borders.’

‘For this one, I liked the final result as much than the moment of painting itself. For the past few years, ones in a while I let aside the traditional way by taking a different approach by painting more freely. In my opinion this way of doing can be achieved through years of constant practice to make it relevant. It`s a nice feeling, a more instinctive way of painting base on the flow and  movement without compromising  the architecture of the piece itself. We still build a solid house on a strong foundation before choosing which colors we’ll paint the wall, no?’

FIRE AT WILL: NARC

THE IMAGINARIUM OF: BIRD O