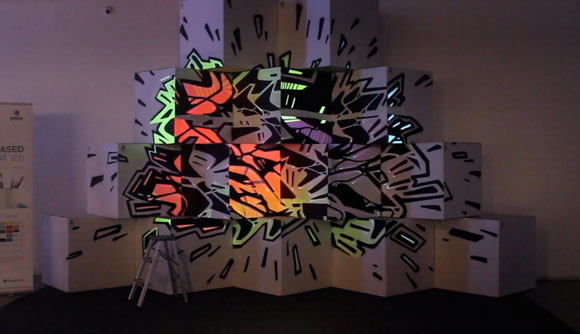 During the 15th Anniversary de OFFF 2015, Montana Colors together with DOSBCNStudio present the audiovisual piece, “Graffmapping”, where the mapping technique is projected over 14 80x80cm boxes (MTN Puzzl6), forming a pyramid of light and color. This sum of tools makes it possible to design a visual language that adapts to any space and surface, making any intervention ephemeral. It’s a renewed vision of graffiti through the interaction of techniques, brought to us by the young design studio formed by Canary Island graffiti writers and designers, who are based in Barcelona.