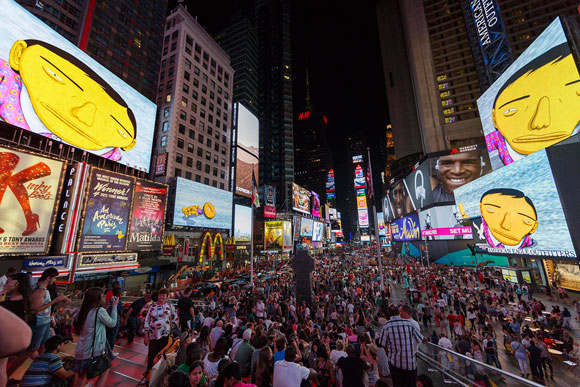 Os Gemeos once again raises their work up another notch. Since a week ago, at 11:57 midnight, the screens of Times Square in New York serve as a platform upon which the animated characters from their new ‘Parallel Collection’ project appear. The project is part of Midnight Moment, a monthly proposal by The Times Square Advertising Coalition (TSAC) and Times Square Arts, that up until August 31st will feature Os Gemeos’ animations at the Broadway Ave. and 7th Ave. intersection.

‘Parallel Collection’ breaks down the barriers between imagination and reality in a unique and massive way, thanks to the peculiarities of the medium used on this occasion; a barrage of screens that transform into doors and lead us to Os Gemeos’ fantastic universe.

You can keep track of the project by using the Instagram hashtag, #midnightmoment