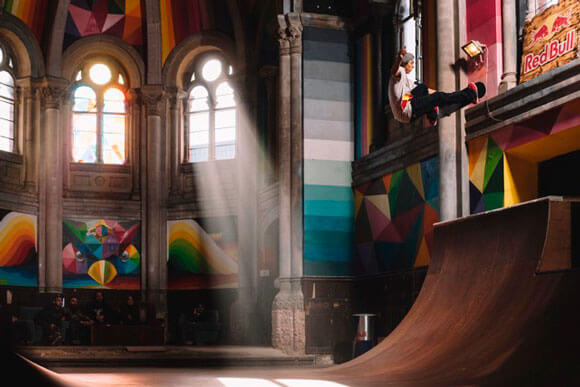 The project whereby Okuda transformed the interior of a church has finally come to an end and the result is just spectacular. We’ve prepared some questions for Okuda himself regarding some issues that we felt were appropriate to address in an intervention as unique as this one.

As we’ve seen in the Paco De Lucia metro station, it’s not the first time you’ve had to adapt compositions to specific architectural structures. What’s it been like adjusting your work to the peculiarities of a church?

I think this is exactly what attracts me to these types of projects, and what made me fall in love with the church. I feel very comfortable adapting to surfaces as classical as a church. The contrast between such colourful contemporary painting, and classical, raw stone architecture is what impressed and excited me the most upon finishing.

Can you describe the experience of decorated such a unique space? At some time or another, did you feel like one of the medieval artisans who decorated churches?

The feeling was incredible. I felt extremely privileged to be able to paint my own Sistine Chapel; uniting worlds as diverse as skateboarding, street art, and art history’s most classical surface; the church. 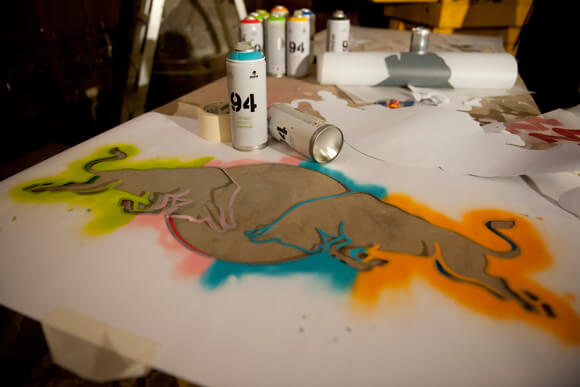 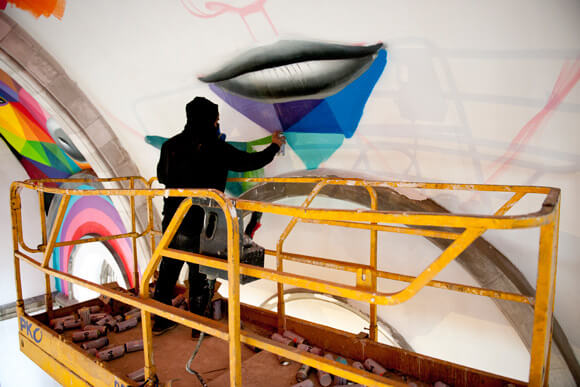 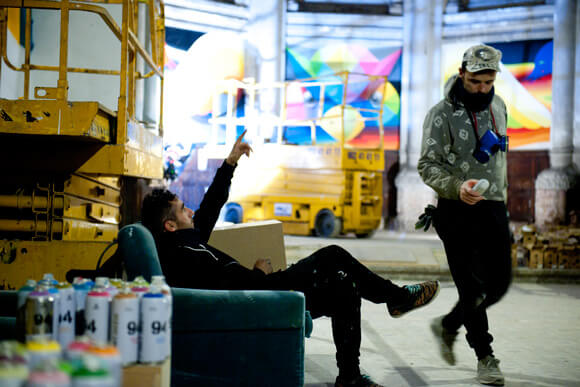 We see many natural as well as human elements in the composition: a bear, a bull, an owl…what do they symbolize?

I think the fact that it was a church caused me to think about all religions are their symbols. There’s some inspiration from Hinduism where animals are the gods, seeing that I’ve travelled quite a lot to India and it has always inspired me.

Also, animals and humans are very representative in my work. I think it was the right place to include my complete iconography.

Is it crazy to think that religiously sensitive people might think this intervention is a sacrilege? What would you say to them to make them feel reassured?

I don’t think there’s any negative or offensive connotations in my work. And it came from my heart, with all of my love. So So, I don’t think it could be considered sacrilege; it’s far from it. 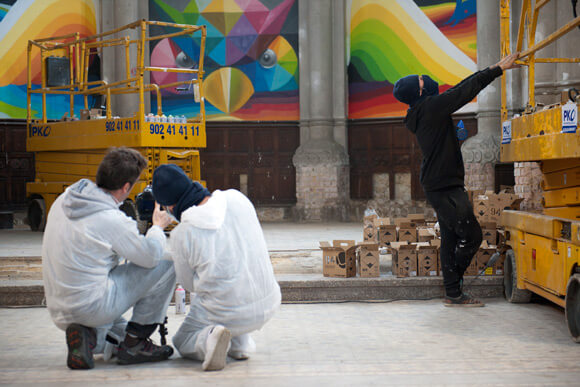 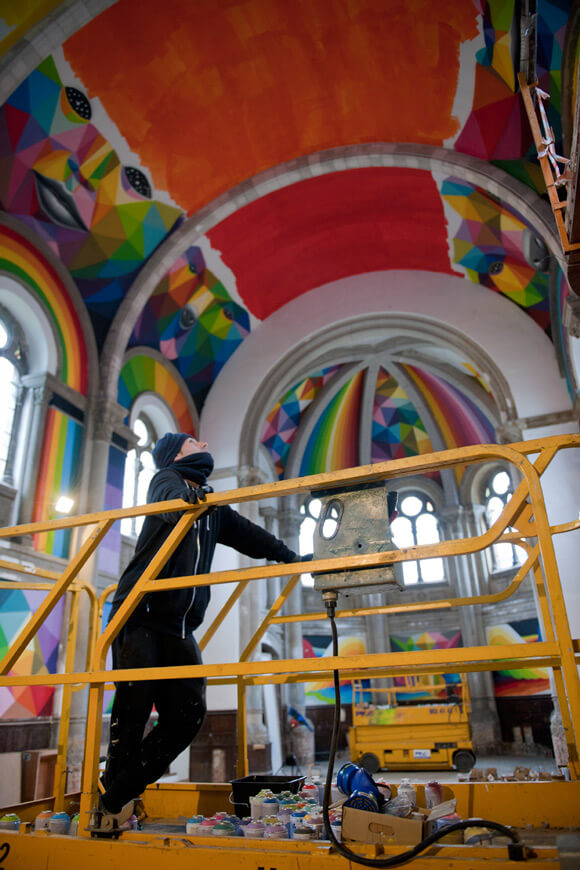 Why was the temple decorated on the inside and not on the outside?

It’s because the space I was attracted to was the interior. The exterior is pure brick. And above all, because of cultural heritage issues. The government gave permission to paint the inside. They even permitted the changing of the windows to my stained glass windows.

Your colorful, geometric style is reminiscent of stained glass or mosaic, which makes it fit perfectly for the decoration of this building. Do you think that it also fits in with the skate scenes’ taste?

Maybe the skate world is a bit darker. Or more punk. But the magic is in that. In uniting two different worlds and connecting them perfectly. In fact, from what I could see, all the skaters, the people from the Church Brigade, and other onlookers’ reactions were totally positive.

Did you have a true religious experience?

Totally. I believe that all religions are the same, simply interpreting the same thing in a different way. We are all God. Humanity united… in a way this is a representation of my religion, my freedom, and of my way of life… KAOS STAR…KAOS TEMPLE… it’s freedom, color, positivity, love… 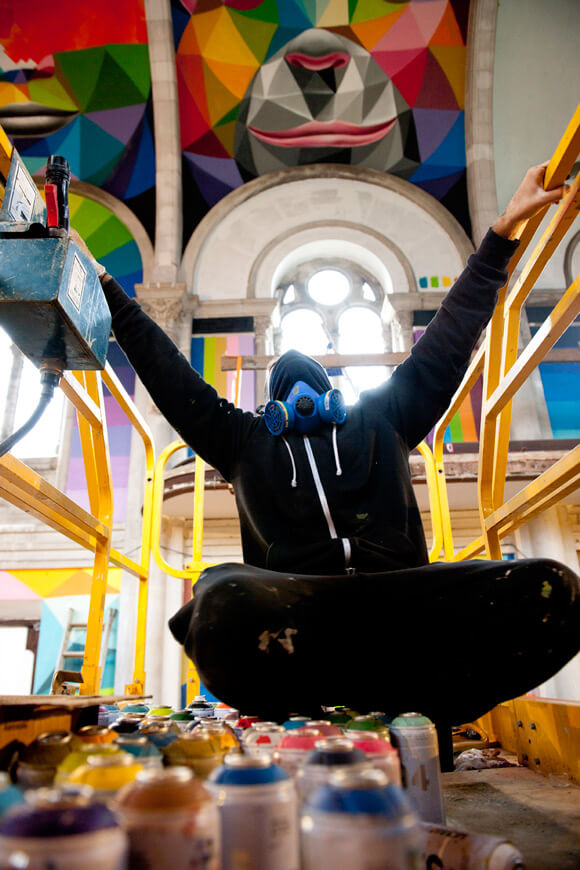 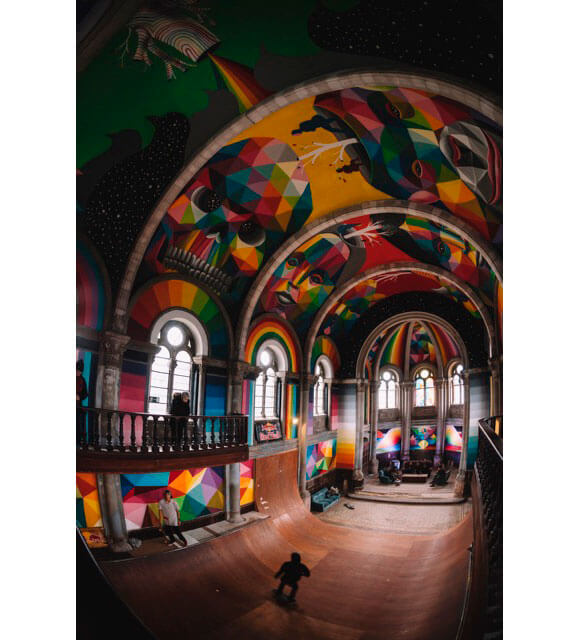