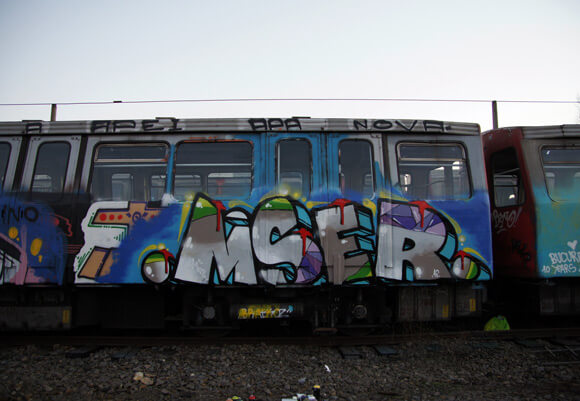 Mser being the king of the Bucharest metro is something that almost everyone knows. But there’s some things we can’t find out unless we ask him directly. For that reason we’ve interviewed the most internationally reknown name from Romanian graffiti. His responses will definitely be a surprise… 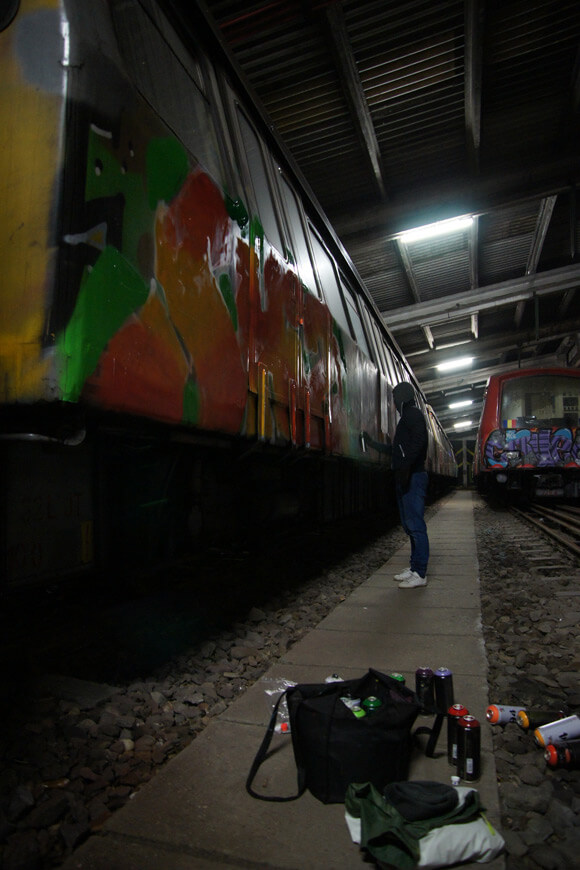 How is a normal day for MSER?

I don’t have normal days, I have normal weeks. During the week for example I for sure start Monday  morning off by taking pictures in the yard or in the station. In the afternoon, I wake up thinking about how to make some money or some cans for the next days, meet friends, and then maybe go painting or walk around.
Tuesday for sure I’ll prepare something to paint or paint something.
Wednesday the same… try to paint something, then in the evening I play football…in the night I paint, in the morning I take photos…
Thursday I relax a little bit then try to make some money or get some cans.
Friday in the evening I play football again, at night I paint, then on Saturday morning I relax.
Saturday evening I meet tourists writers and we try to paint something.
Sunday in the day time I paint a couple of times and that’s the week. And Monday morning I go to take pictures again. 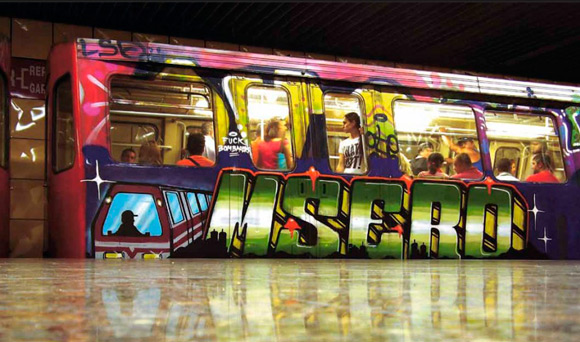 How would you explain to someone who has never painted graffiti, what it feels like to paint a metro?

It’s tough to explain to a person who doesn’t understand what it feels like and how the game works. The first thing is the emotions and how great it feels to be in a tunnel, how good you feel when you paint a train, and how good it feels to see your panel rolling into the station. It’s very difficult to explain that to them because for the majority of them they’re losing time. Maybe they begin to understand if they get to know you after a few months. Then, people start to understand it when they see it’s something that really effects you, that you get anxious when you don’t do it, that you lose sleep over it… 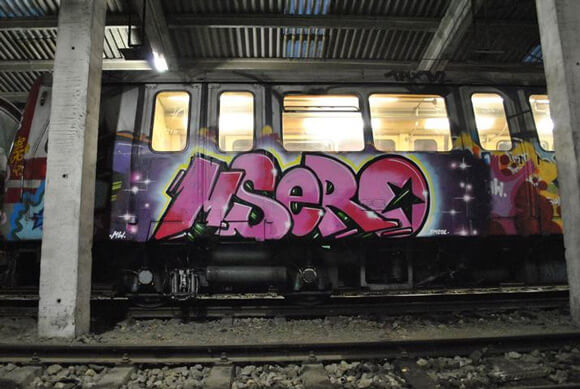 What differences are there between being a metro writer in Bucarest from any other city?

I feel happy to be from this city… I don’t know how to express it too well… I feel like we are lucky because your pieces can be running for years. That first, and second thing is that we have two levels of graffiti. We have the old metros and also the new ones, where you can feel lucky to see your piece running. It’s one of the most difficult systems in the world. I feel very lucky to live in a city like Bucarest where we have two levels of graffiti on the metro.

If the metro is painted, does it mean it’s easier to paint?

Yes, sometimes it makes it easier because the security guards can’t tell whether it’s a new piece or not. But there’s also difficulties while painting the old metro. For example if you want to paint a wholecar it could mean a crazy mission just to get a photo. 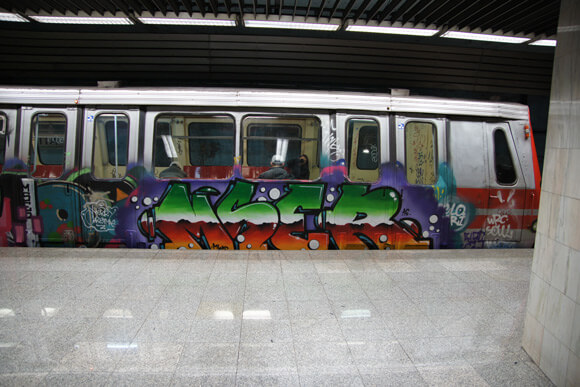 And on the new one?

It’s the ultimate game. It’s a game of paint, a game of security against us, and it’s a game with the mafia, because the security guards pay the mafia to find us because the Police don’t arrest us. That’s because our law isn’t too tough on graffiti. The maximum punishment is 2000 euros and they think we’re rich and that we can pay it with no problem. That’s why the metro security uses the mafia.

What can happen if they catch you?

It’s impossible to know. We know it’s happening because we know a few guards who have given us this information. And we confirmed it when we saw strange people looking for us. The first time I saw that I stopped spending so much time in the trains, and before that we invested a lot of time monitoring the guards and talking with them so they were nice to us. 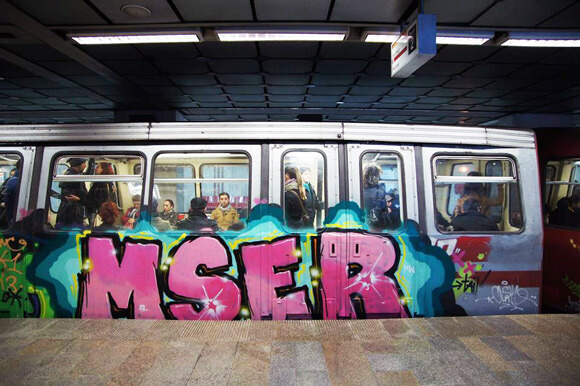 How do you choose who you go over?

Is there a lot of beef?

Well, I have beef with a crew but they’re not exactly my enemies because they paint a lot less than me. They paint once a month or something and I paint 5 times a week.

You have a lot of themed pieces. Where do you get these ideas from?

Often I get ideas in the street, in the nature… the seasons, the spring, the summer, the sun, the ocean.. everything gives you ideas, constantly. I never say, “tonight I’m going to think of some idea to paint”. The inspiration comes to me when I see something strange in the street or on the television for example, then I try something new. But I prefer to do my normal letters that everyone knows me for. 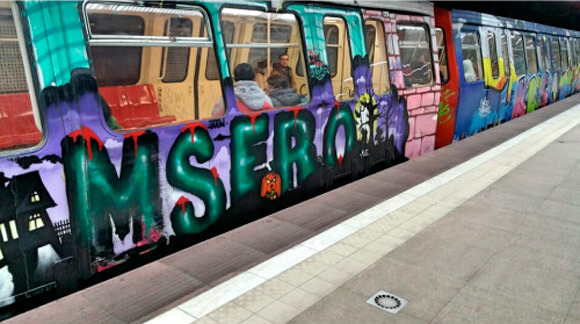 Your style is simple but your technique is very perfectionistic. Why did you choose this way of doing your letters?

When I was young and I started to paint the metro, I began trying a lot of different styles. That was more than 12 years ago. I saw a lot of strange styles on the metro, like German styles, Polish styles, Spanish styles, French… all of them were different and I didn’t know what was good and what was bad. But in the end they didn’t convince me. I just wanted my name to be legible. If you are a normal person you can’t read those graffiti styles. So, I chose normal letters and painted clean. After that, the older writers from that era tried to do normal letters too so I have that influence from my city. Clean and simple.

What do you like the most and the least about Bucarest?

In my opinion it’s a graffiti paradise. I don’t paint in the street, but if you do your piece can last for 10 years. For the metro I also consider it a paradise, since pieces can last the same amount of time on the old cars. And on the other hand, on the new metro you can find hundreds of guards inside the hangars, like an army, and that motivates you. Here we have both extremes: the very easy side and the very difficult side.

What I don’t like is that the metro system is small and that I can’t make money as easily as I could in the rest of Europe. If I could make more money I would paint more.

One of my favorite cities is Athens because it’s one of the most destroyed cities in Europe and for its metro. Next, Madrid for the friends I have there and for the type of metro system it has. And finally, Paris. It has my favorite systems in the world because it’s a city where you can get everything you want, but the only inconvenience is the Vandal Squad. 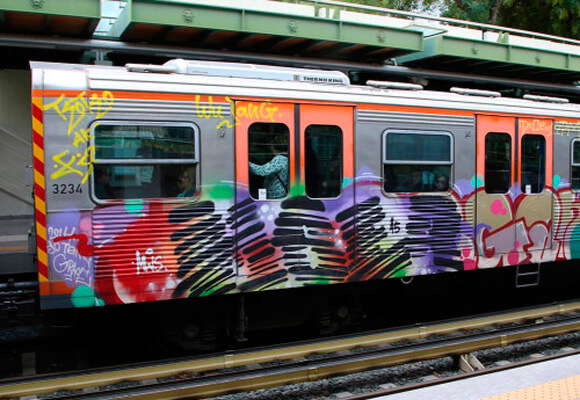 5 writers who you respect?

Tell us of an anecdote that has happened to you.

I have hundreds of them. Every time you paint you get a different story.
But there’s one that I’ll never forget was when the head of the metro Police told me, “I really like what Mser paints on the metros”, without knowing that it was me. At the end of the conversation I told him, hey, I am Mser.

And what did he do?

He tried to escape like a snake since he couldn’t do anything in that very moment.

I started to think about releasing a second book since the first one I didn’t like that much because it really wasn’t my personal project. I’d like to do a new book with good images and with a lot of different metro systems from different cities, not just from my city.  I’d like to show the whole world what I’ve done because nobody can see the quantity of graffiti I’ve done. They’ve only seen 10% of what I’ve done. I hope that by the end of 2016 this project can be finished. 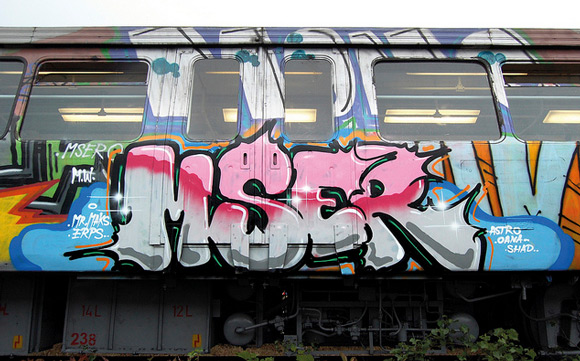 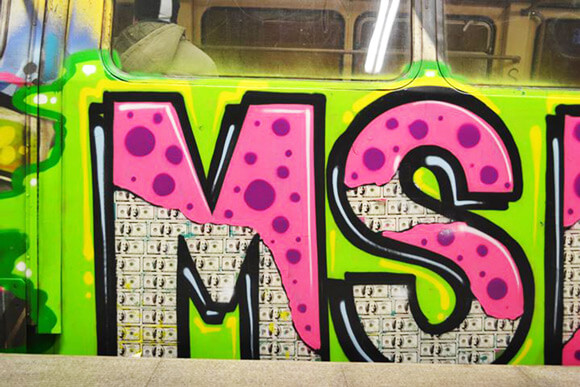