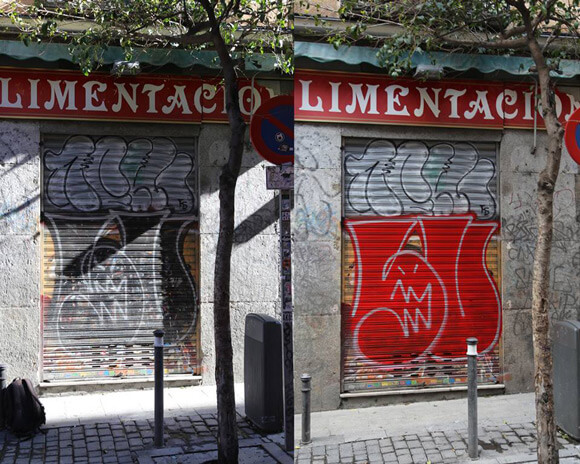 Pinta Malasaña is the name of the “metal shutter dignification” project that’s taking place in Madrid’s Malasaña neighborhood.
The event, like many others of its kind, is intended to replace the illegal, codified, and rushed graffiti for permissive works that are more widely acceptable, in an attempt to promote coexistence between urban art and the neighbors of the area.

Guillermo Enforma has taken this opportunity to send a message about tolerance and to promote contemplation about graffiti’s culture importance as well as its institutional rejection, and in affect, it being rejected by society. There’s nothing better than his own words to explain the intervention; an action to “dignify graffiti”.

Within the system you can do whatever you like while following its rules. But you can also find your place in searching through the cracks in the rules, it’s not necessary to build your own through the work of others.

That is the philosophy which I’ve been obsessed with since I was young, even before painting graffiti, and it’s the only way in which I wanted to participate in this event.

So, before sending any proposals to the organizers I got in touch with the Madrid writer, BUNY (KR2).

I proposed for him to do a throw up on one of the shutters in the Malasaña neighborhood and in exchange I would give him the 170eu in materials that the event was providing to the artists.

He started becoming active in 89 and he’s an undeniable cultural vestige of the Madrid community, of Europe, and of the world…

In 2011, we are Malasaña organized “Persianas Libres” and like him, many local writers saw their stuff getting substituted for another stuff done by people who had no relationship at all to the culture, and without anyone having discussed it with them prior to it happening.

In some instances we witnessed the organization propitiate the confrontation of important figures within the Madrid graffiti scene, which wasn’t an example of reconciliation at all.

Glancing through the networks you can extract the notion that these initiatives eliminate the city’s cultural vestige and that they take work away from writers who make a living by painting the shutters of businesses in the city.

This information has been sent to the organization together with my proposal so that everything was left out in the open and we could understand each other better.

Buny accepted the proposal and so did the organization.

For that reason what you see is nothing more than a testimonial change in color to what had been there previously, and I think that’s good.

It remains graffiti – ugly graffiti with an angry grimace in the B, but it means that the organizers do intend to listen to what is being reclaimed. If you demand it, they’ll let you write your name on a shutter in an event, and 798 more people will ask to do the same, that’s what’s going to happen.

Returning to the beginning of the text, this can be applied to the system in which we live; we give shape to it in a great way but if we don’t think about the impact we’d like to cause in our society, we end up choosing the easy way out, the cheapest way, without worrying about anybody else other than ourselves.

SOME OF THE MOST INTERESTING ABSTRACT GRAFFITI WRITERS