Having access to BKR192’s three best pieces is a luxury that only the most refined palates can enjoy. So, bon appetite!

Abbey Road London 2012. In this piece I didn’t have any color scheme planned, but I like the way it turned out together with the character. The only thing I planned was that I was going to do a white outline because it was night time and it’s the color I like to use most when there’s not much light, since you can see the lines so well. I remember it was a night in the company of local writers from the 80’s.

West London 2015. That day I didn’t want to use too many colors. I also wanted for the letters to be easily read. I did the fill the same as in the sketch with the same identical shapes inside the letters. The characters are madballs; one of my favorite collections. 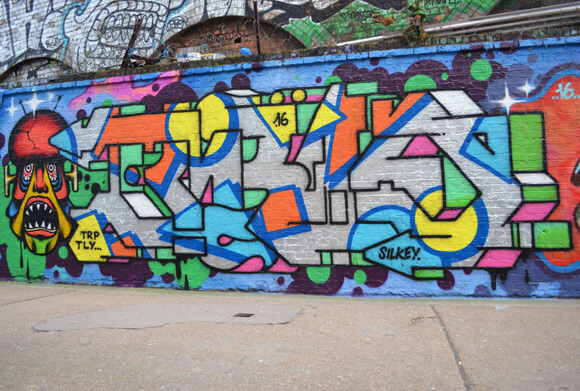 Slater Street London 2016. One of my favorite spots, although pieces don’t last long there because of the location, but the size is perfect. I’ve had many great afternoons on that wall with a lot of friends. That day, the fill in was a bit crazy and the piece is a little bit troglodyte-like. I love using silver like it’s any other color.