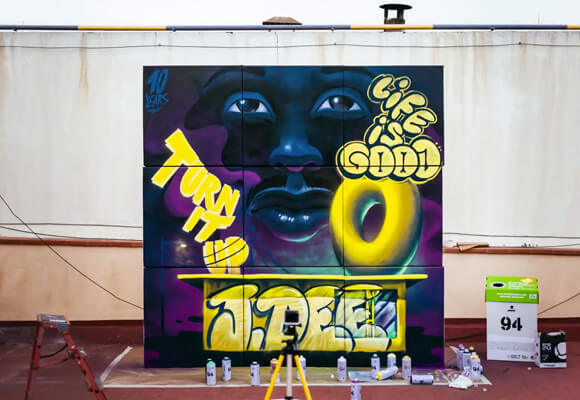 In light of the video release for the event summary, it’s time to revisit the celebration organized by TheWelcomeSessions in homage to J Dilla during this past March. As you might imagine graffiti also played a relevant role in this successful celebration.

“On March 5th of this year on the occasion of the 10 year anniversary after Jay Dee’s death, we celebrated in his memory with the approval of the J Dilla Foundation, and enjoyed ourselves in the company of all the attendees who came out to shake their bodies to the rhythm of the drum. Among the invited guests we were honored with a live performance by the band, Black Cardelli, with a special guest collaboration featuring Nytto Dread y Santi “Suko”. On the wheels of steel there was none other than Dj Chxsbx who opened the event, Jordi “Dive Dibosso”, and DJ Virginie who closed the tribute party. Harry Bones together with Montana created a Photocall that we were able to take advantage of during the entire event. Also, we had projections by DJ 2D2 which enlivened the night and last but not least, an assortment of donuts courtesy of one of our favorite spots, Lukumás.

Greeting on behalf of TheWelcomeSessions to all of those who made this great little event possible, and that we were able to celebrate together.”
The WelcomeSessions.