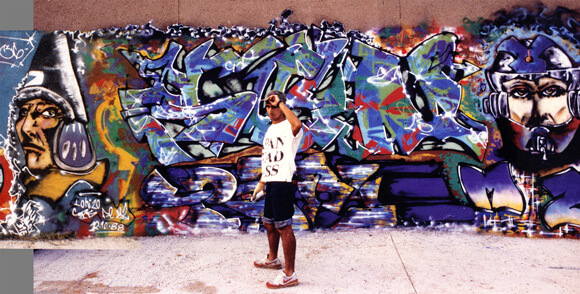 Estilizar Spidy – Barcelona 1988
In a time when we didn’t paint with Montana because it didn’t exist, we had to steal paint because of its ridiculous price. We didn’t change the caps to make the outlines cleaner and we didn’t have a good range of colors to choose from to be able to plan the pieces out. It was a time that when it got dark, you had to be careful in order to keep painting because that was when the violent gangs would do their thing and one wrong move could cause you to wind up at home without running shoes or other possessions.

It was also a marvellous time in which the second generation of graffiti writers in the city finally came up strong, and for those of us who started alone we finally had some new people on the scene to motivate us to keep going and get better. 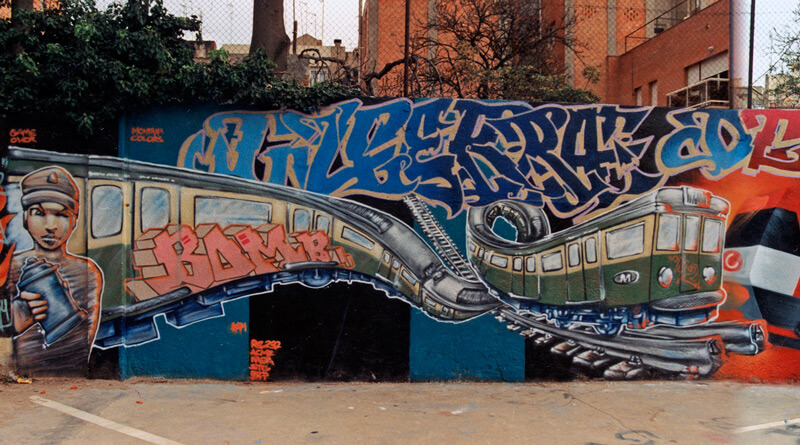 War of Styles with Musa, Moockie and Dudax in Barcelona 1994
The first year of Montana Colors. The first productions with colors never before used. Here we did an homage to graffiti’s foundations. We started painting metros in the middle of the 80s. They were old models that had some parts in wood. They were green on the outside and that’s the part we represented on the wall. Moockie did what at that time he painted the most, the new Renfe Cercania train models with the mirror windows (in the photo he’s sticking his head out on the right). Musa gave this production the title with a wild style piece that read, “War of Styles”.

Toast, Kapi and Saturno in Calella (Barcelona) 2004
Among all the things that graffiti has given to me, the best of it all are the friends. So many walls shared with so many different people from all over the world. With some of them you become “family”. You share, you visit, and you learn. Toast is great; Switzerland’s finest. Saturno is a good friend, pure hip-hop. He always admired Toast so as a surprise, I decided to link them up… and I took the middle slot to enjoy the celebration.