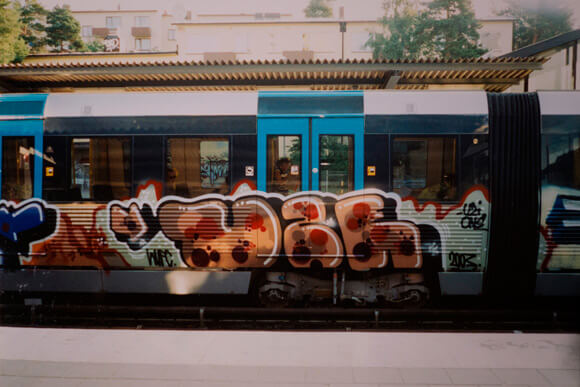 Today we have the privilege of showing you the Three Aces by one of the most celebrated writers from the Nordic scene; the influential Uzi from Writers United Football Club.

“Sometimes you just take a leap in the evolution of your style. Some pieces come out better then all the others you do at that time. Looking back, it’s nice to see what made them better.”

Summer 2003. This piece is done with Montana Hardcore except for the Carosol White. This was the peak in terms of how much we could do on a Backjump. There are a lot of different colors in this piece and it was done in Farsta Strand with Que and Tango o Laser from Munich. I love the fat round shapes in this one. The train ran for a while and here it was on the way back to Farsta from Alvik. Good times.

Spring 1993, during the winter of 92-93, I started to do more commuter trains and I like this one the most. I really enjoyed this period in Stockholm. There were so many pieces running on the commuter trains. It was a trend at the time to do a light outline and dark highlight. I had no paint for background! Beckers Silver, Belton Pink and Auto-K Red. I like the way the letters are connected. That night in Ulriksdal Pura was with me. Note the two MOB tags by Reson. 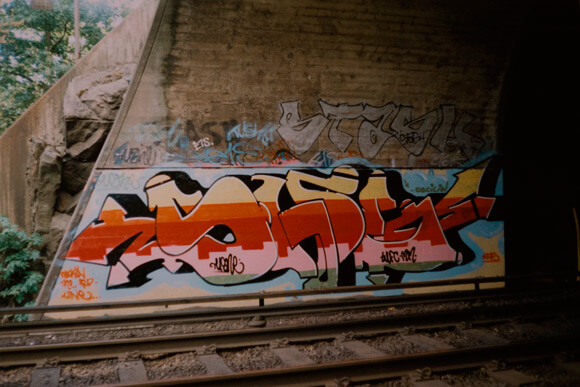 Summer 1995, done on the Red line close to the Gärdet station. Its probably my best piece ever. Its so much better than all the other pieces I did at that time and even for a long time afterwards.
I like the letters, colors and the way it’s placed on the wall. A bonus is the old school graff above. The wall had never been buffed since the eighties. The Stash letters by Cruel/Poker are so good! Probably done in 88-89.