ELLA & PITR GIVE US INSIGHT ON THEIR IMPRESSIVE “HEAVY SLEEPERS” VIDEO 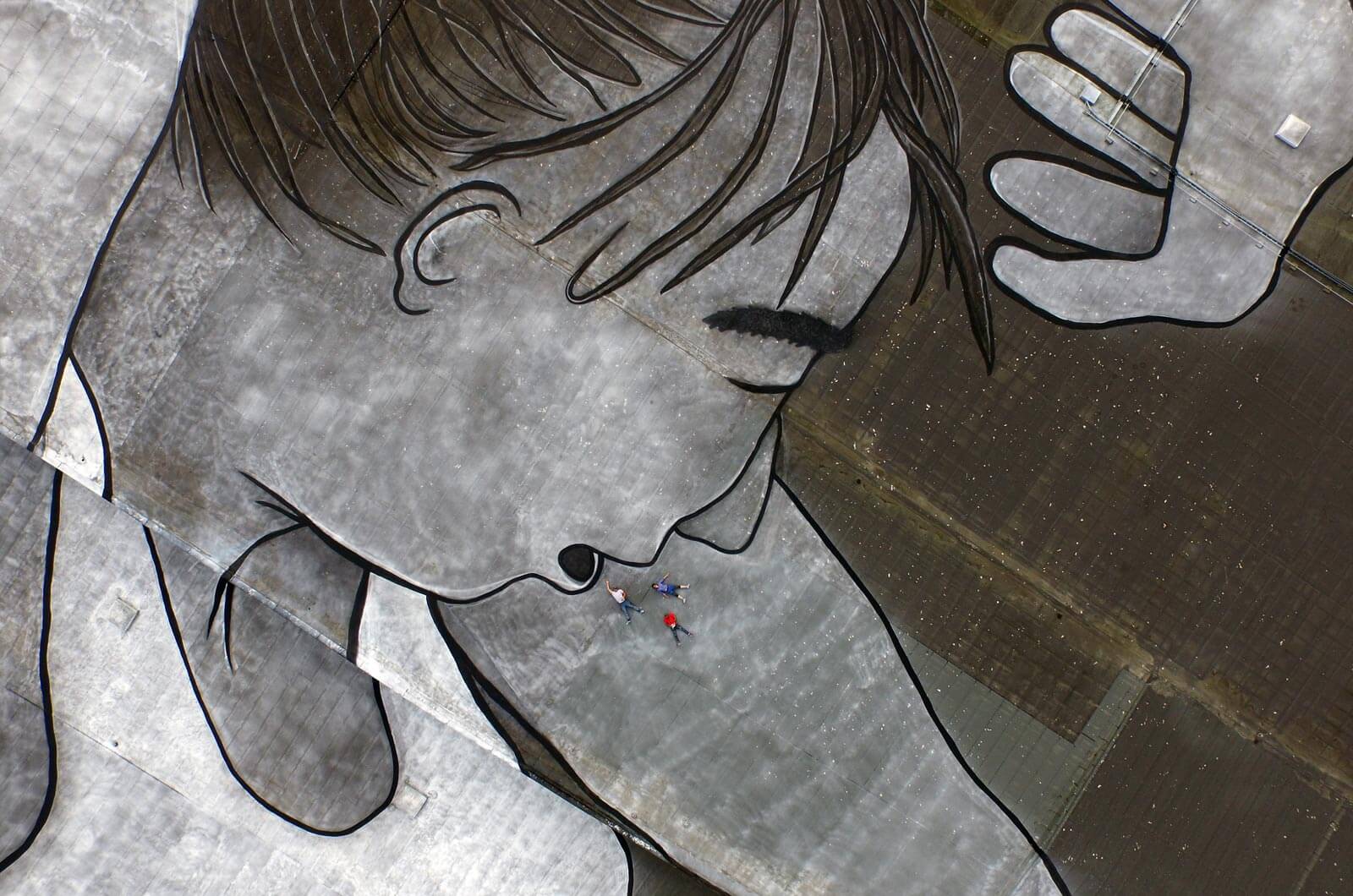 ELLAPITR are Ella and Pitr, a couple of street artists who specialize in gigantic projects on the ground. Lying somewhere between street art and land art, many of their works cover vast surfaces and are only visible from a bird’s eye view.
To inaugurate this new year they’ve released a video that compiles several works, from 2013 to the present. These are the sleeping giants; painted characters resting in strange positions, adapted to the terrains where they have been planted.
Since the video was so impressive, we wanted to know a little more about everything and asked this French artist couple some questions.

How and when started the idea of this project?

This project of sleeping giants started in 2013, when we painted our first drawing on a parachute base. As we couldn’t find any drones, and as the helicopter rent was to expensive, we asked some guys, parachute addicted, to take the photos of our giant. They were used to jump from a plane and land in a field near to our city. So we painted the floor and they took some picture with their go pro!

Then we found a young movie maker which was one of the first drone pilot in our city, he filmed the first drawing made in the snow.
Since that day, we decided to have our own drones and start working mainly on the “Heavy sleepers project”.

How did you choose the locations of the interventions?

At the beginning, we were looking for the locations directly in the streets, looking for flat roofs or big concrete spaces. Then, we spent lot’s of time on google maps, which is very useful and easier than looking from the streets. 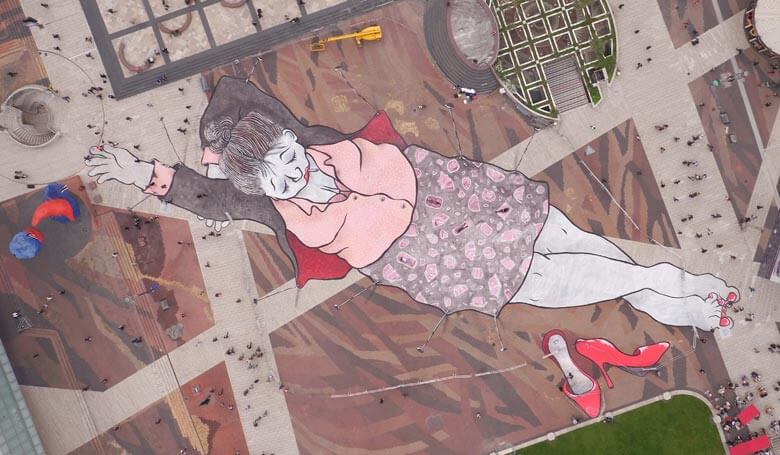 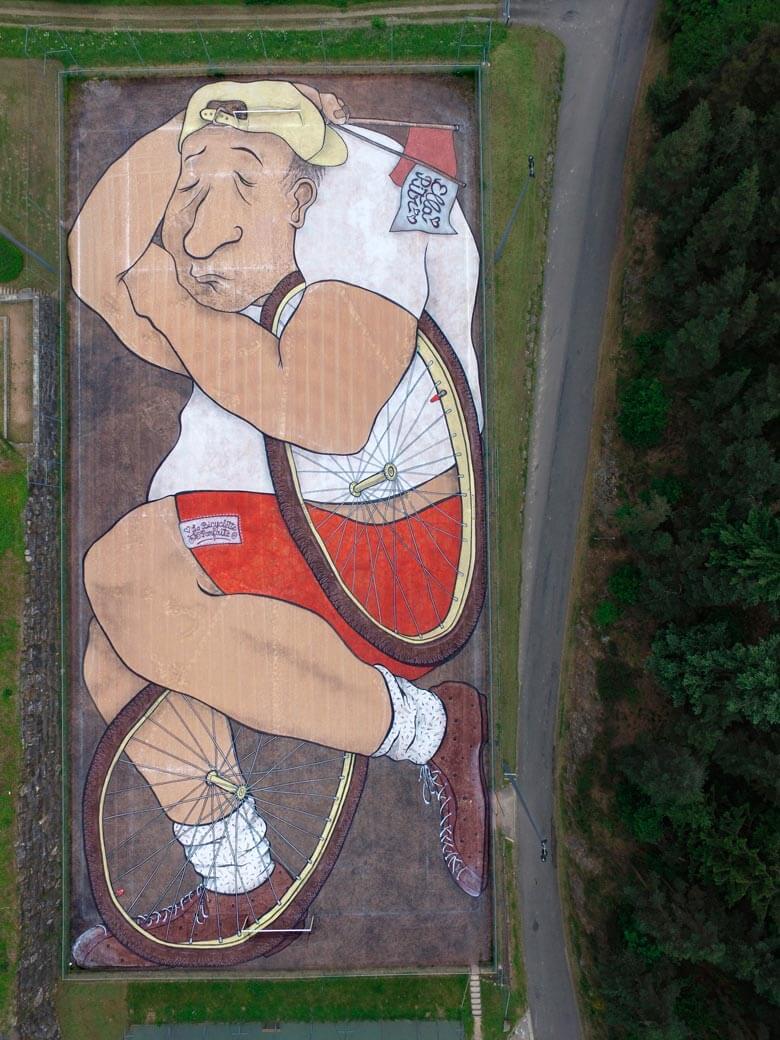 Where are the places intervened in the video?

There are many different spots, like an abandoned airport in Chile, a huge industrial factory in Norway, a harbor in Belgium, La Defense in Paris, a car park in a small village in Italy or a hospital roof in Puerto Rico… We painted many flat roofs in Montreal too, and of course in France where we are based.

“We can’t say if horizontal paintings will be the future of urban art (…) but we’ll tell you soon!”

How much paint do you think you used addending all works?

That’s difficult to say… Each floor is different, it ‘s never the same texture so the quantity are changing on every spots.
We also paint with natural pigment when we want to make the drawing disappear.  As we are thinking about ephemeral artwork since the beginning, the use biodegradable pigment made form chalk and other mineral bases.

We can’t give you the quantity of paint/pigment needed from the first giant drawing, but we can tell you that we have painted around 60 giants.
The smallest was around 1000 m², and the bigger were 14 000 m² (Ostend), 18 000 m² ( Paris), 21 000 m² (Norway). So we can estimate the total surface should be around 180 000 square meters if each giant make 3 000 m².
We were helped by good volunteers on the very large scale interventions, without them we would need 3 weeks to finish one drawing! 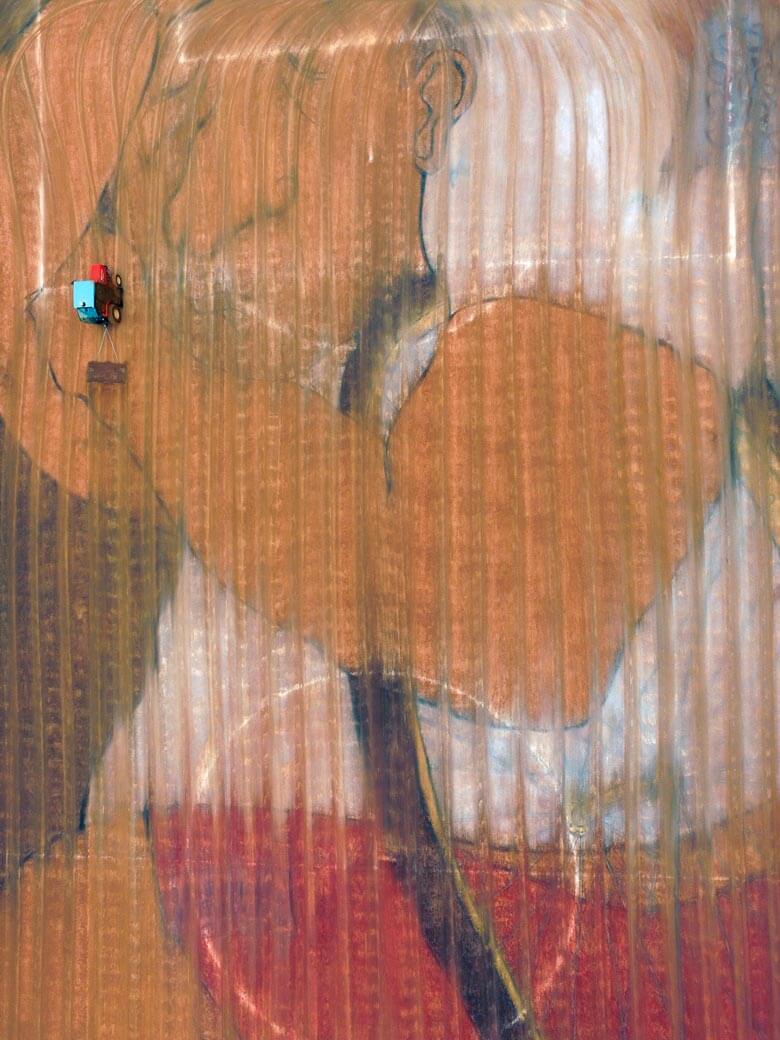 Is the ending of the video real? Where comes the idea from?

Of course it’s real ! And that’s the first step ! We have other explosion footage.
This idea was born in 2011 when a huge tower was destroyed in our city St Etienne. We couldn’t work directly on the tower, so we pasted a poster on a advertisement billboard, in front of the building. You can see it on this link, at 2min12sec.

We are like children, we built huge tower of cubes and destroy it just for fun.  So we can say that the project started when we were kids.

The use of drones is something very usual nowadays. Do you think the horizontal paintings will be the future of urban art?

Yes, drones are everywhere now. Let’s see what will happen for the next years.
Horizontal paintings will probably become a good option for the future, that’s why we chose to focus on it few years ago.
We decided to shoot our drawings from the sky thanks to the drones, this new point of view and technology influenced our choices.
We can’t say if horizontal paintings will be the future of urban art because we don’t have our crystal ball with us… but we’ll tell you soon! 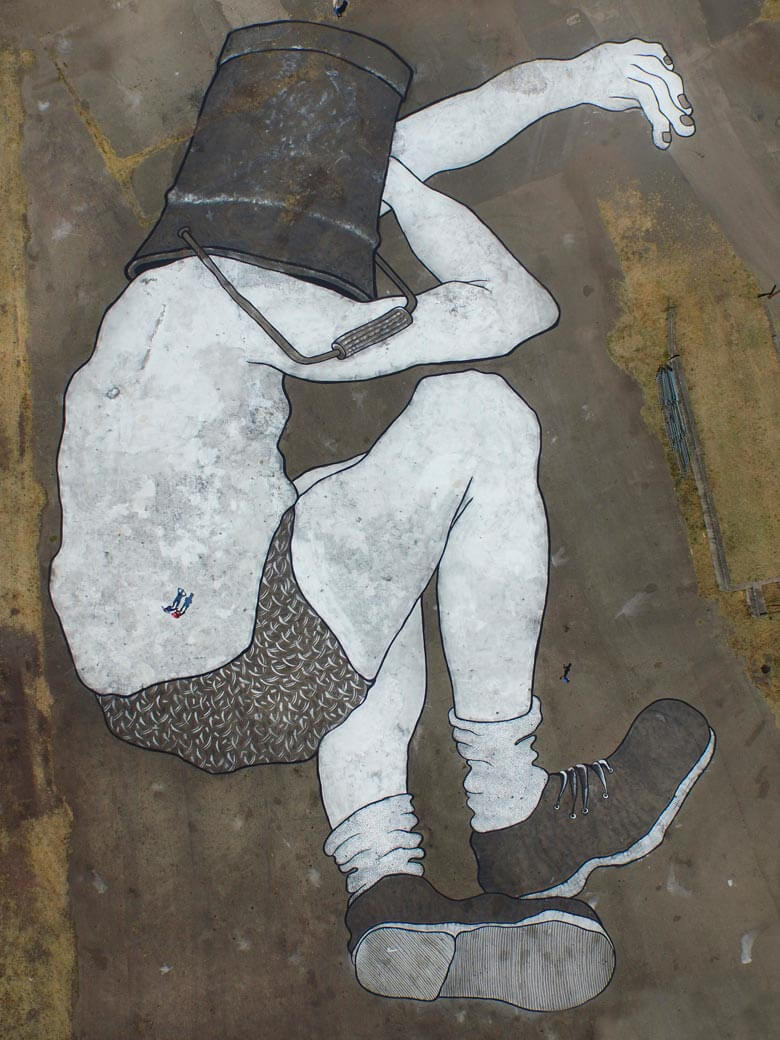 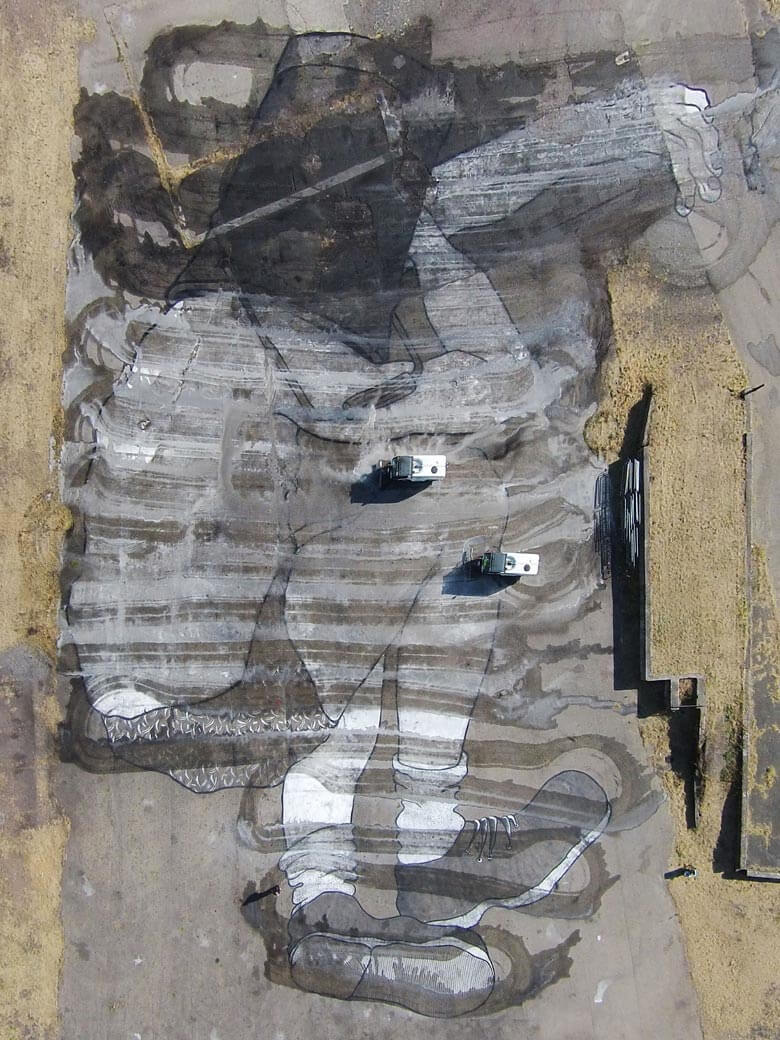 FIRE AT WILL: FUEGO

FIRE AT WILL: MITES

FIRE AT WILL: ZEMAR