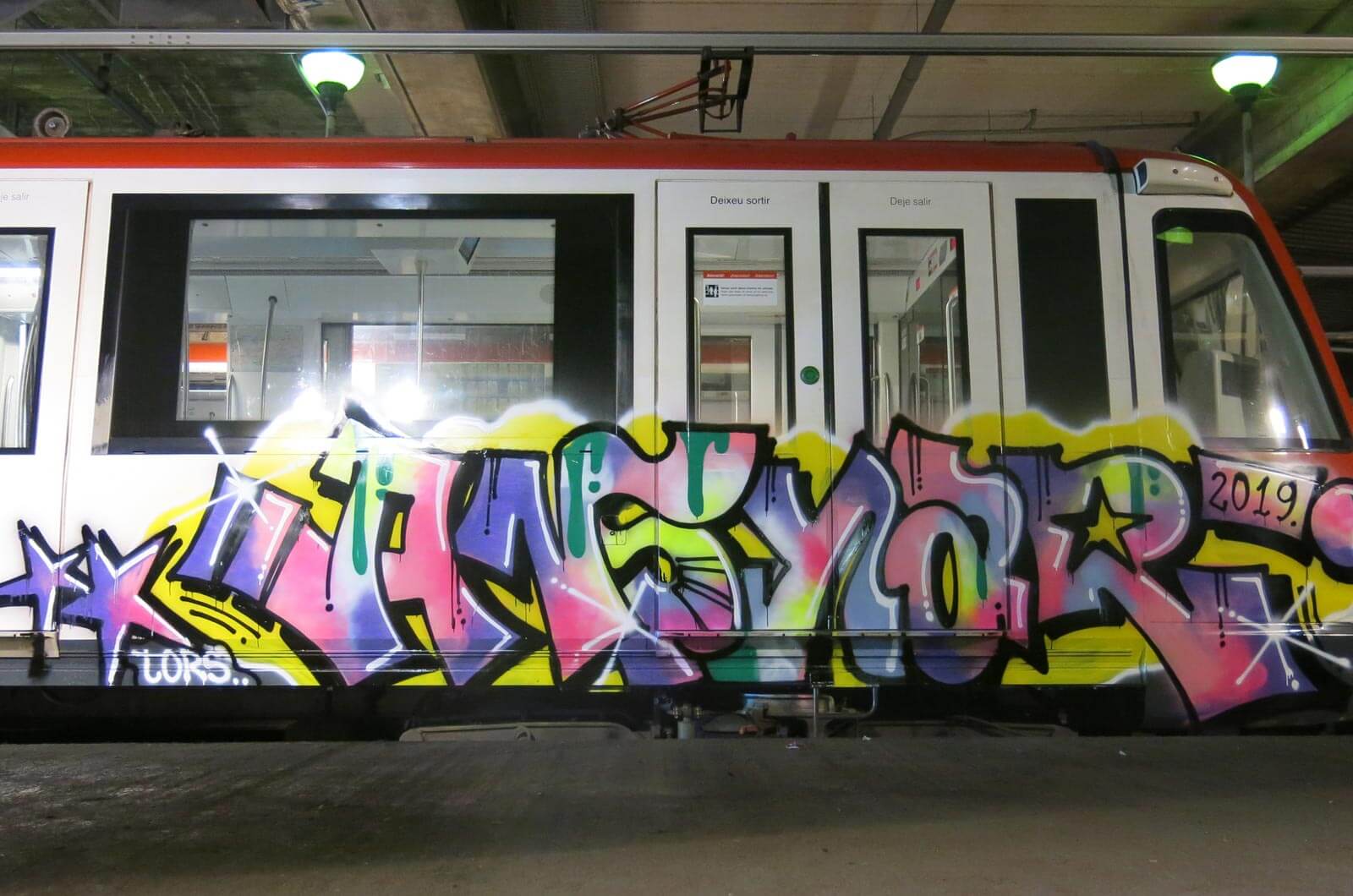 Ansya emerged on the Barcelona graffiti scene as one of the most talked about names in recent years. Living up to his name (“Ansia” is a kind of restlessness in Spanish), his creative anxiety has led him towards other creative fields that range from illustration to tattoo to fashion. Today is the opening of his first solo show at El Montana Cafè Restaurant, so we’ve taken the opportunity to chat with him.

Where does the name Ansya come from?
I don’t remember exactly where I got it. But I had already played around with other names that I didn’t like as much. This one was catchy because it wasn’t the typical graffiti name…like Ator, Pator, names like that…names that don’t mean anything. It caught my attention because it represented my attitude and because it’s one of those names that could be male or female.

“I prefer to do something halfway than not at all”

That attitude encompasses everything you do, you bounce around many different scenes aside from graffiti …
That’s true. It makes me anxious not to start on the things I’ve dreamed up. I prefer to do something halfway than not at all…It happens with my style in painting or tattooing too, it’s chaotic because I like a lot of different things. 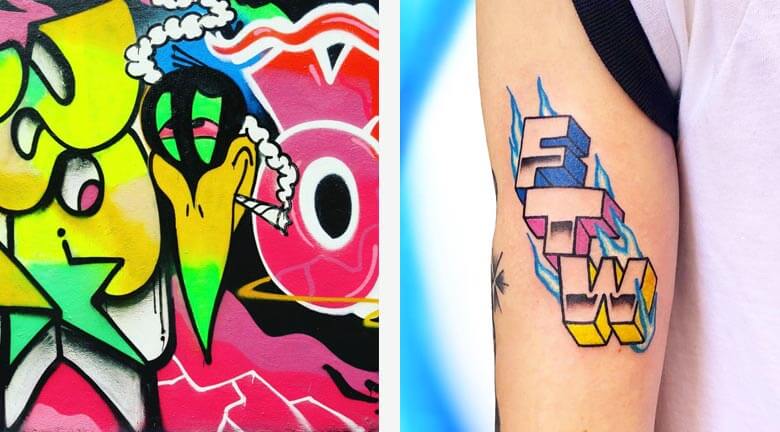 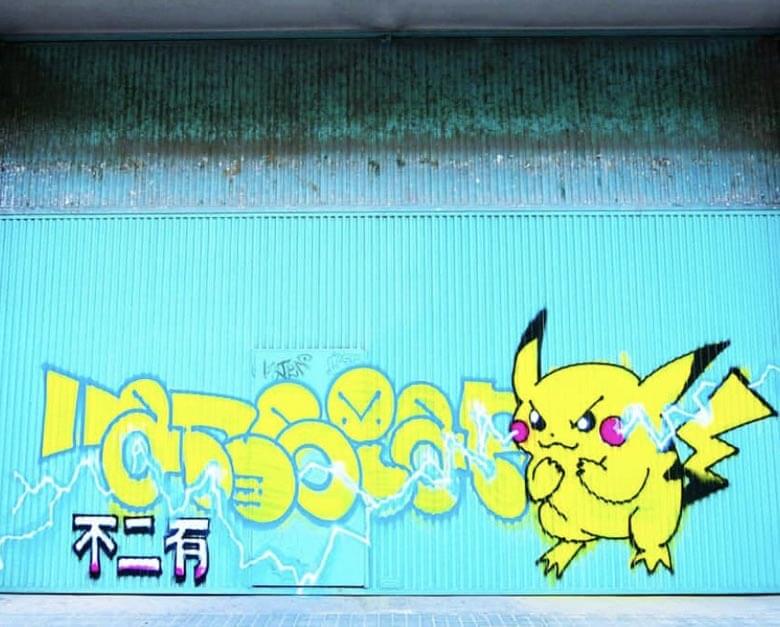 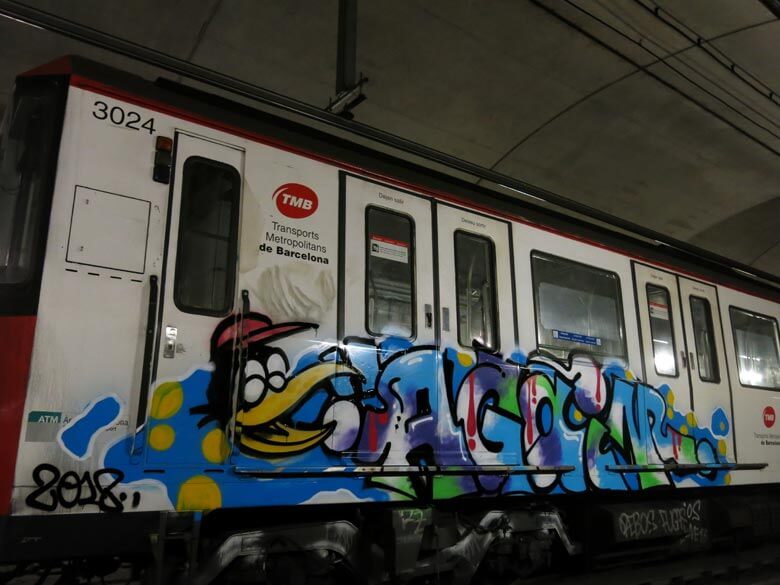 Many writers who focus on different art forms change their style, but you’ve kept within the same same line…Do you think there’s an explanation for that?
I don’t know if I am qualified to judge my work in that way, because I don’t even know if it’s a “style” or if it’s reminiscent of many things on their own. I try to find my style, and for now I’m synthesizing it with color patterns — something that I think is fundamental. I honestly don’t feel that that everything I do is along the same lines.

“for the tattoos, I resort back to the themes of my childhood. Iconic images that stir up some nostalgia”

What inspires you to create?
In my illustrations I try to reflect the feelings that I’ve experienced, mostly in my travels. For example, in the exhibition “States,” everything is very related to the last few months I spent in Los Angeles. Maybe it won’t transport the observer directly to that specific place, but each work comes out of an idea I had when I was there.
As for the tattoos, I resort back to the themes of my childhood. Iconic images that stir up some nostalgia, and people who have lived in a context similar to mine can feel it too. 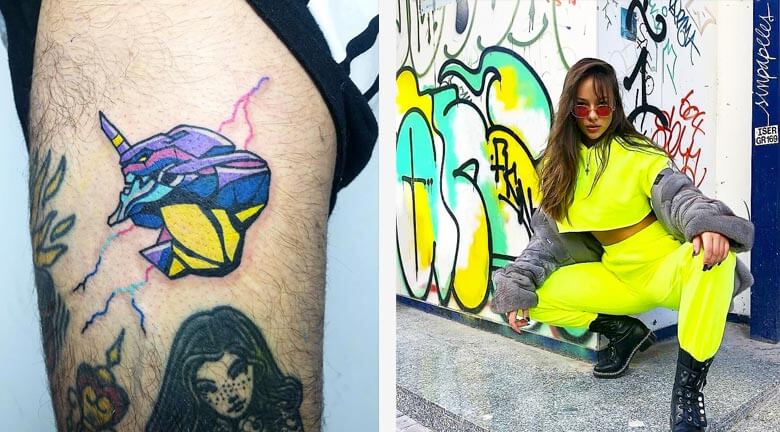 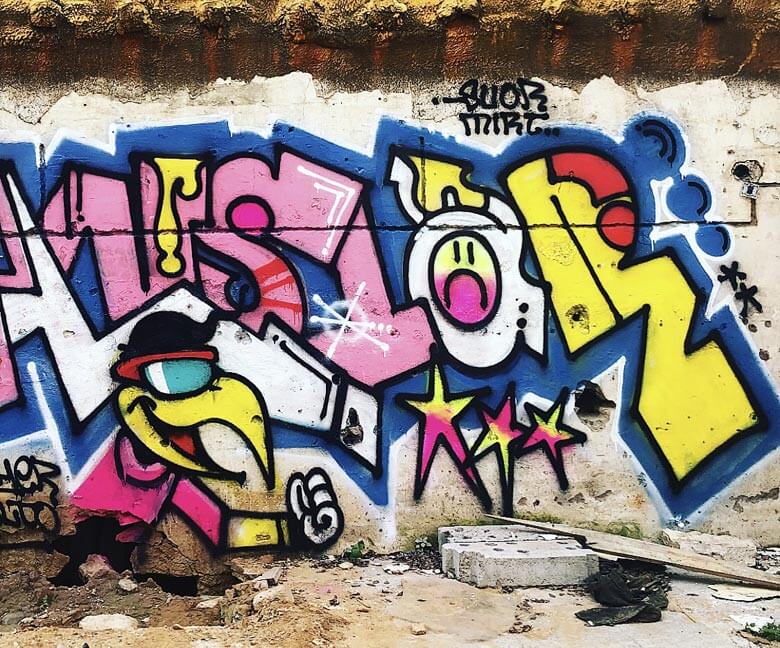 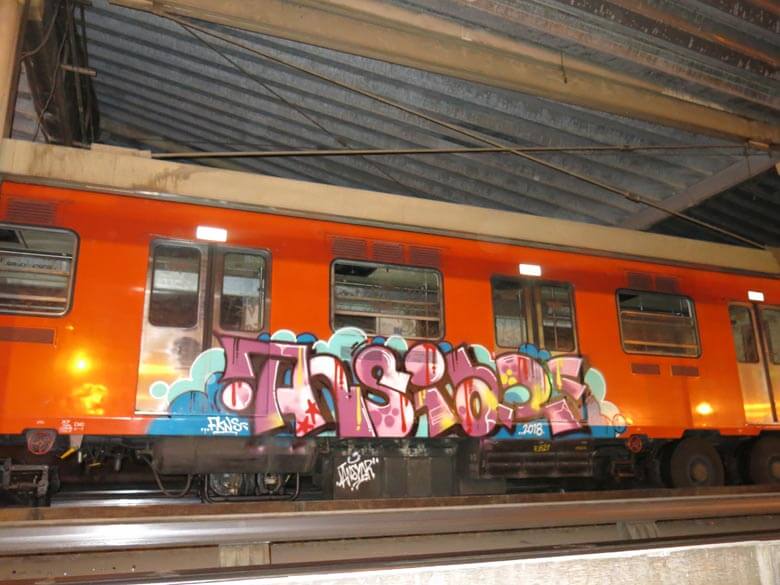 “It was just what was missing, on top of living together and we had to spend a night together in a garbage container.”

Any painting anecdotes that come to mind right now…
The most nervous I’ve ever been was in the States, but the most I’ve ever had to run was here in Barcelona, no doubt. I remember a really funny story, for what it meant to me at the time…
This is from when I was living with Saher. One day we went painting together, the police followed us through the tunnel. We had to run for a good while and we ended up in the middle of nowhere. We came up to street level and they were waiting for us, so the chase continued down the street. Since we were easy prey at the point, we had to hide in the first place we saw and we climbed into a dumpster. Luckily it wasn’t very crowded, but it was like reaching the maximum point of intimacy with Saher. It was just what was missing, on top of living together and we had to spend a night together in a garbage container. 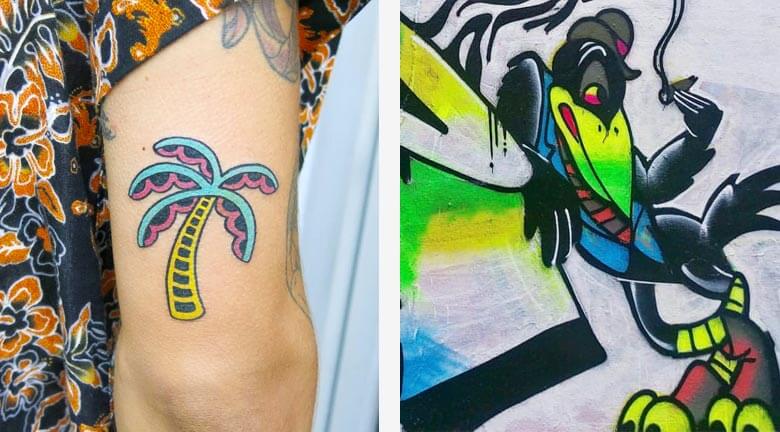 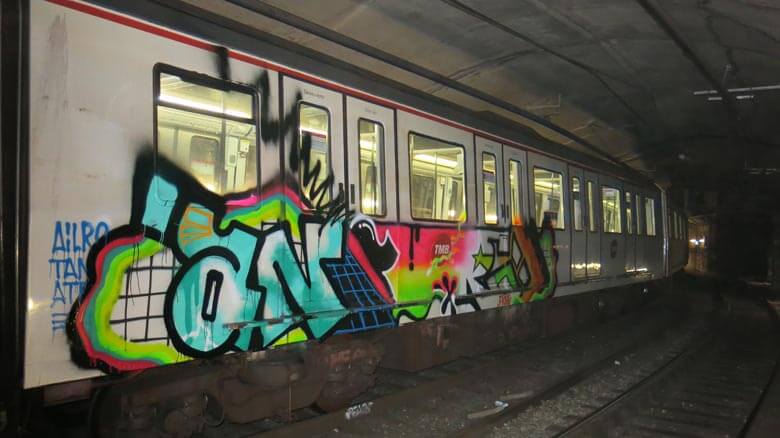 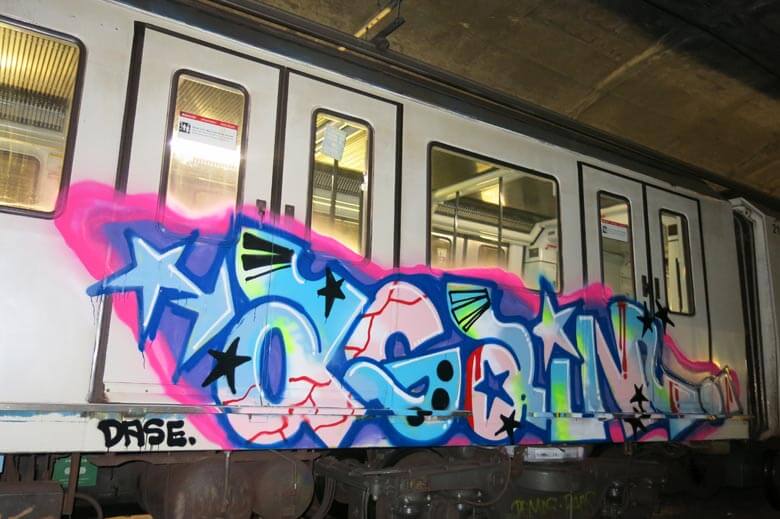 What requires more dedication, tattooing or graffiti?
I think tattooing, because it is a trade. It’s also committing yourself to a field that’s infinite. You could spend all day creating and it still wouldn’t be enough. You’re always learning.

“That’s why I use the palm tree symbol so much, because it would be nice to see palm trees all year long.”

How do you envision your near future?
I want to live the summer mindset all year. Moving around in two places where life is good — starting with the weather. That’s why I use the palm tree symbol so much, because it would be nice to see palm trees all year long. I want to spend more time doing what makes me feel good, rather than on other obligations.

An important lesson you’ve learned:
That you have to have patience…which I don’t. 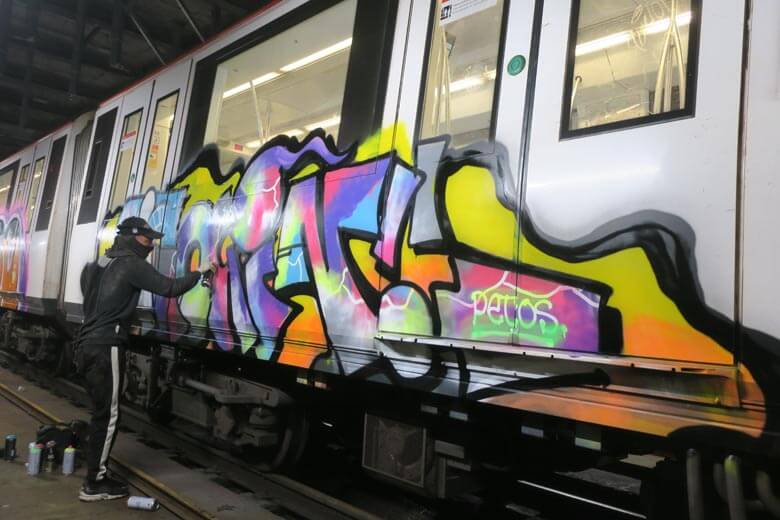 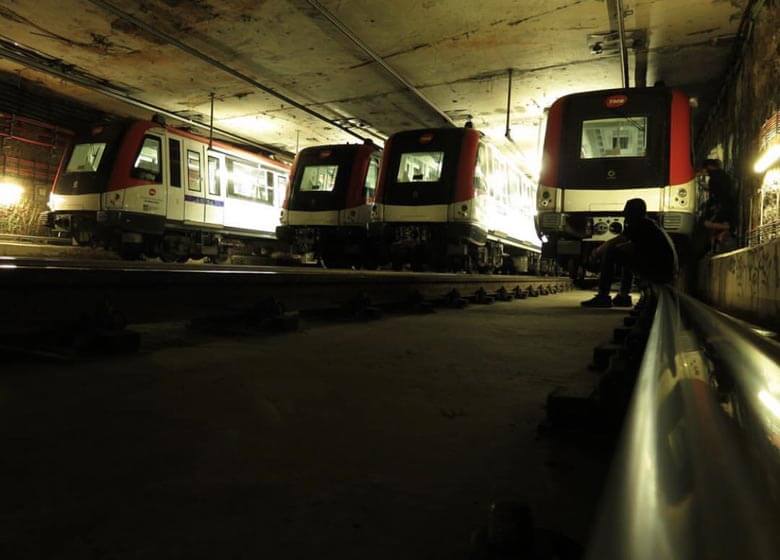