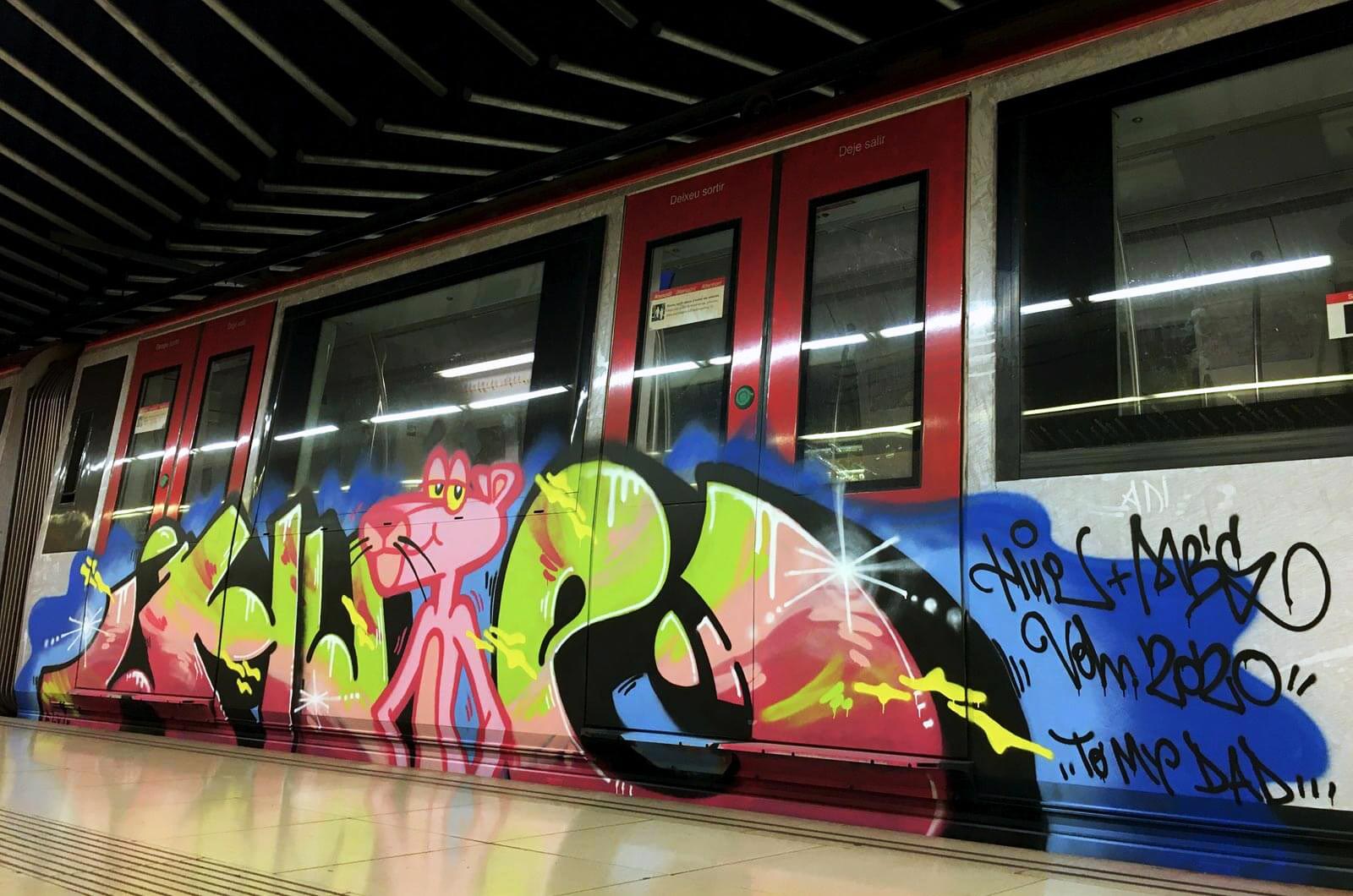 There are already a few names in the Barcelona graffiti scene that have made strong comebacks after years without being active. But one of the most interesting returns is Hue MB’S. The child prodigy of the suburbs of the early 2000s has grown older and has made his return to the subways, carrying the magical freshness of his style along.

When did you start painting?
I started in 1997…when I was 13. I started painting in the street, but from 1999 onwards I dedicated myself to painting trains. It was in 2000 that I started to paint subways regularly.

“after getting into some shit, I started to have grown-up responsibilities, paying bills and all that.” 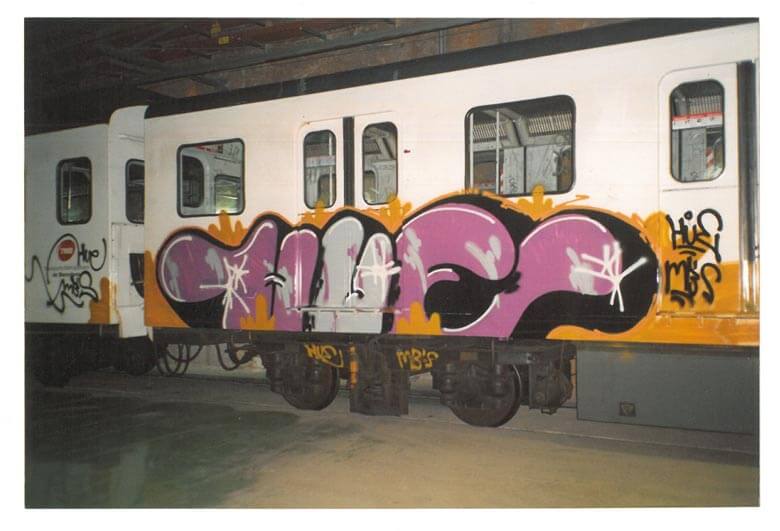 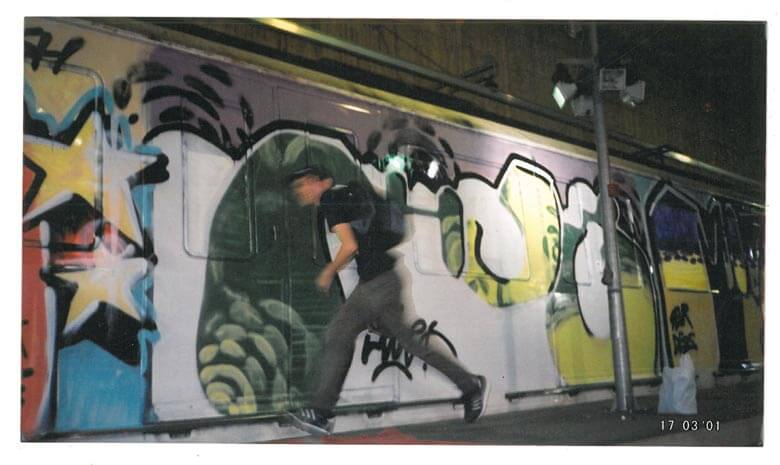 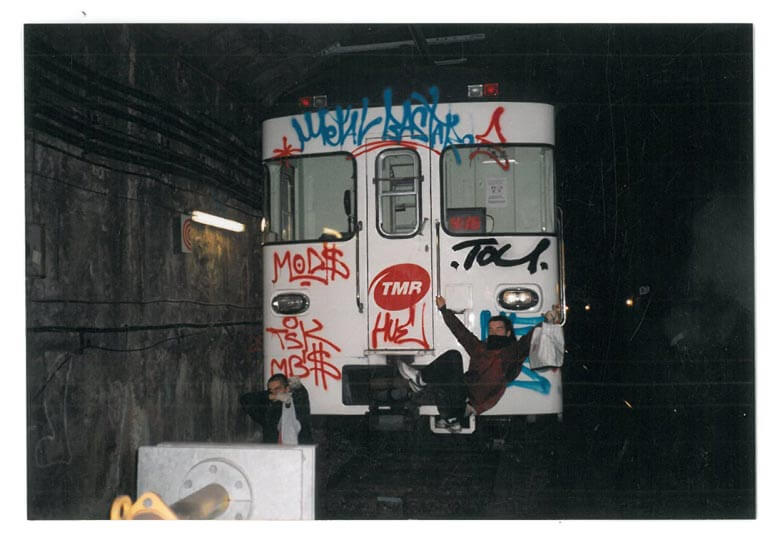 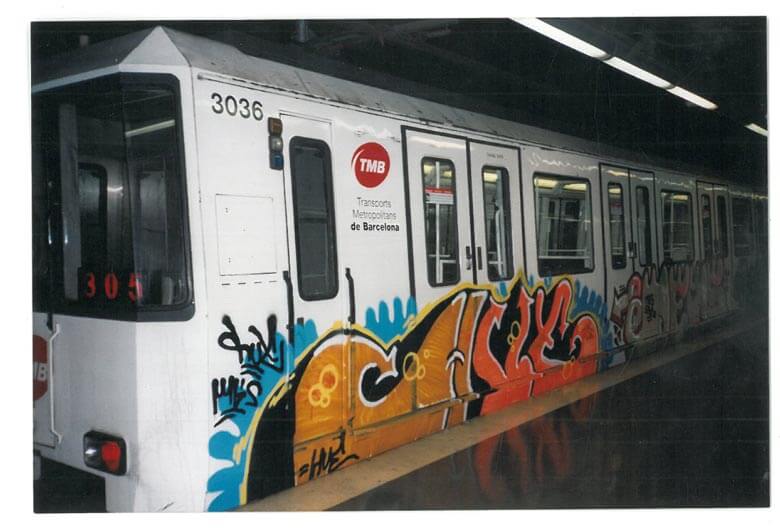 Why’d you focus on subways?
I’ve always liked to do things that not a lot of people are into, and at the time this was the kind of graffiti that the least amount of people were doing.

“For a period of my life, graffiti basically equalled painting the subway.”

What made you slow down?
After painting every day for 10 or 15 years, and after getting into some shit, I started to have grown-up responsibilities, paying bills and all that. I was full of anxiety when I was younger, so at the beginning my goal was to satisfy that urge to paint. Then I put quantity aside, and I began to focus on painting less often, but with more effort. For a period of my life, graffiti basically equalled painting the subway. I did it all, color pieces, chrome pieces, wholecars, end to ends, switching up depots, going on trips, InterRails…so at least I can say I was satisfied. 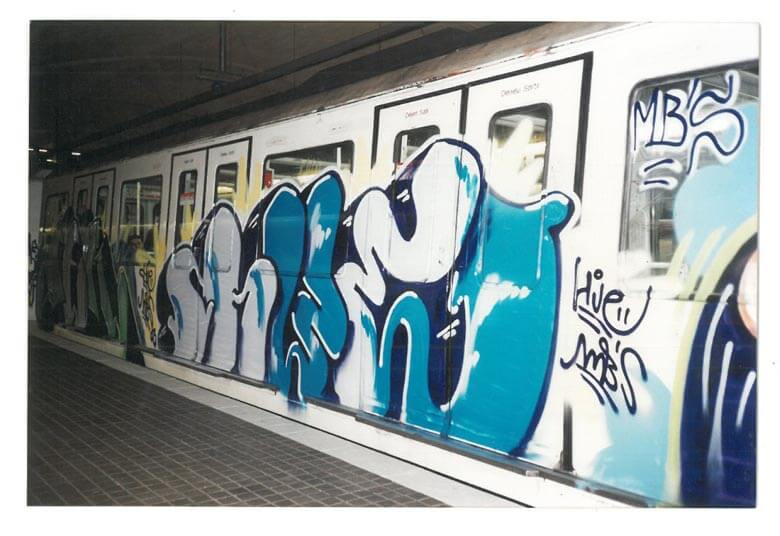 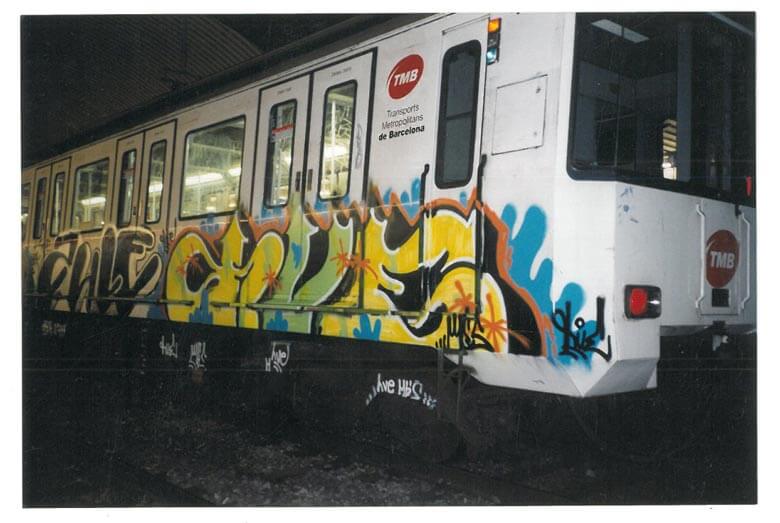 What made you come back?
I’ve been tattooing and it’s an artistic form that feeds back into graffiti. The truth is that I stopped painting subways a bit, but I never stopped doing tags or painting street. I’ve found enjoyment in the subway again, it’s something that I like very much. The trains don’t attract me as much because they are too painted and the models are increasingly ugly. Now that I’m older, it’s also a good excuse to exercise. 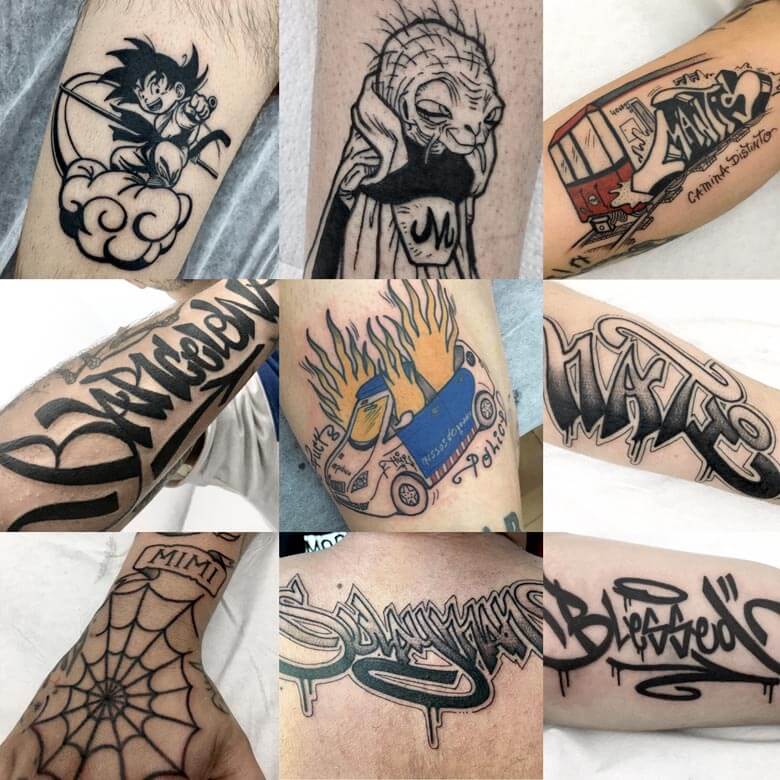 Do you feel your age?
You tell me…back then I’d fall from anywhere and get up immediately. Now, depending on the impact, I can be messed up all week. But it also has its good parts. Experience is a good teacher, and with time your technique improves as well, so the level is constantly getting upped. And not only when painting, when you prepare a mission you’re smarter about it too.

When it comes to painting, what about the company you keep?
From my point of view, egos in graffiti make people pretty gross in general. So I like to go to paint with people I genuinely like, real people who do it because they really like it and not because it’s cool, or because it’ll give them something to brag about. 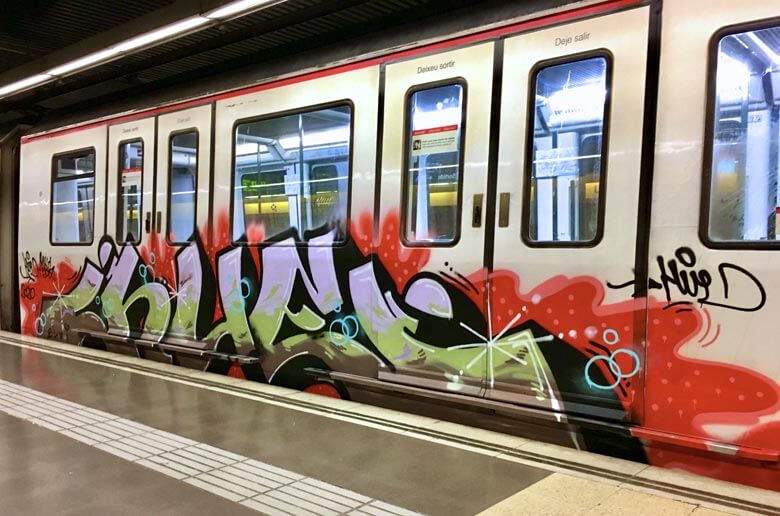 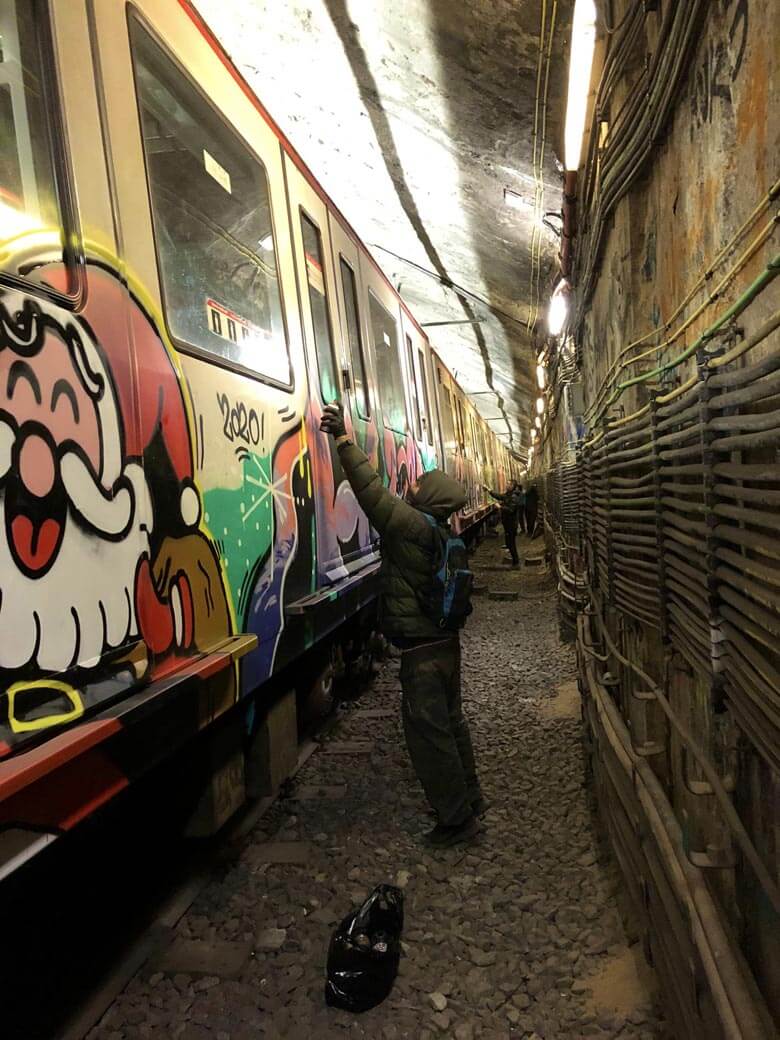 Graffiti is more popular than ever, including trains and subways. What are your thoughts on that?
Before, if you wanted to see graffiti, you’d have to get your hands on the 3 zines it was being published in. If you wanted to know something, you’d have to go see with your own two eyes. Nowadays, everything is super accessible, everything is on the internet. I don’t know what get people hooked nowadays. I personally love the sensations, the smell of the tunnel, trying to fuck the system…Maybe it’s normal that everything that’s cool and underground ends up becoming mainstream.
I do it because I like painting, with whatever technique, and now I incorporate into that. If you add to that going into places where almost no one else can enter and all that…then you’ve got it all.

What age does one paint until?
The other day I painted with Pocho, who, for me, is one of the best writers on the scene. The guy is 48 years old and there he looked like a kid. Then you see young kids who are 20 but have the mentality of a 40 year old. The limits are in the body and in physical limitations that may arise with age.

And mental limitations?
The good thing about graffiti is that it keeps you feeling young, it reminds you of things from your youth…
I think that it can be mentally exhausting, but maybe that’s because of the attitudes of other writers. For me it’s like a way of life, something that will always be there and that will never fail you. You will always be able to take a can and go out to do whatever you want. 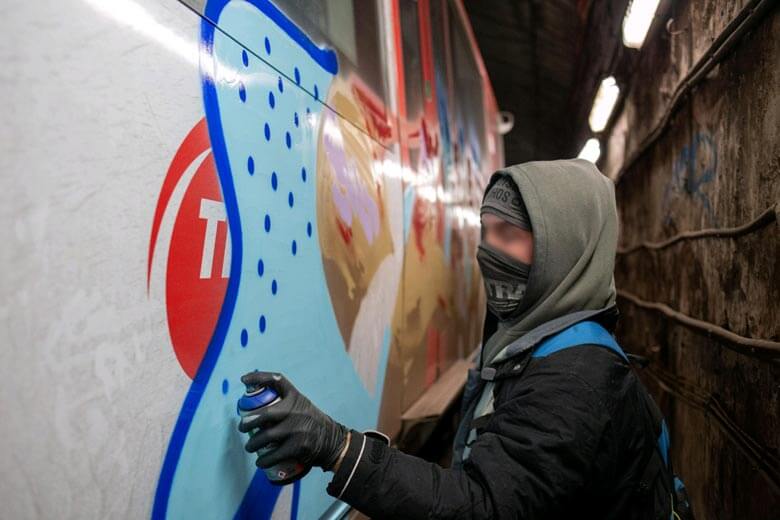 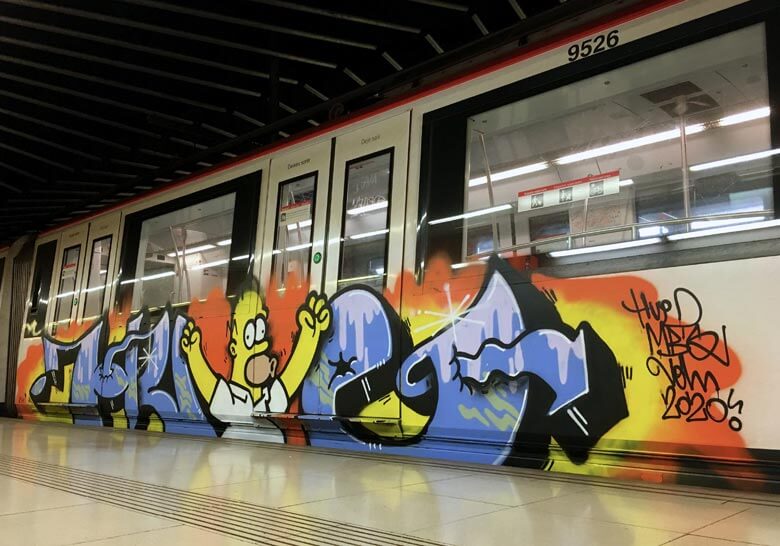 Now that you’re 35, what meaning is there in concepts like old-timer, old school, and those kinds of things….
When I started painting, there were already some people who had been painting for over fifteen years. There’s probably kids painting now who were not even born when I started, so it’s all very relative. But the fact is that when I was young, everyone was older, there weren’t many of us kids…

Let’s talk about tools. Nowadays, you can paint in a lot of places since now there’s paint that doesn’t smell. Montana Colors helped make painting accessible to writers, and now they also make paint that’s become a necessity for subway writers…
They make a bit more noise than regular sprays, but it’s wild that you can paint in places where before you could only be at for 10 or 15 minutes… Now we’re so lucky to have this type of paint that allows for painting for much longer without attracting attention.

In all these years of maturing…what have you learned
That graffiti is the best and writers are the worst. 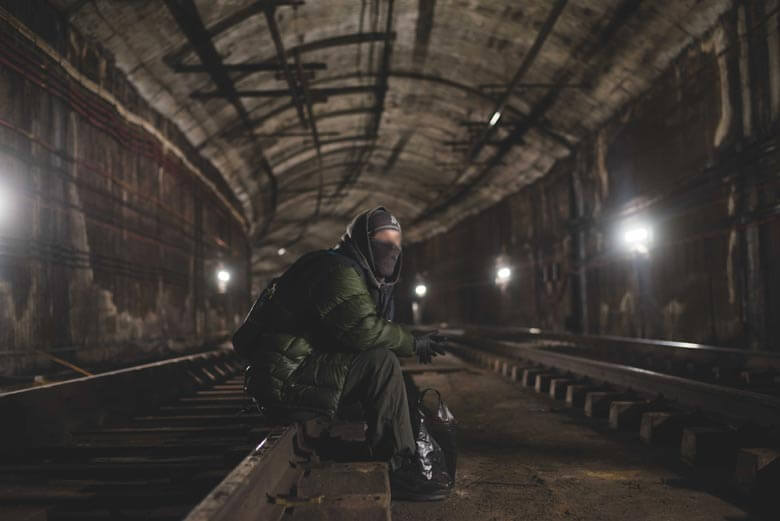