AN INTERVIEW WITH TWIG, THE PROTAGONIST OF THE CAPTIVATING VIDEO “THE WAY IT GOES” 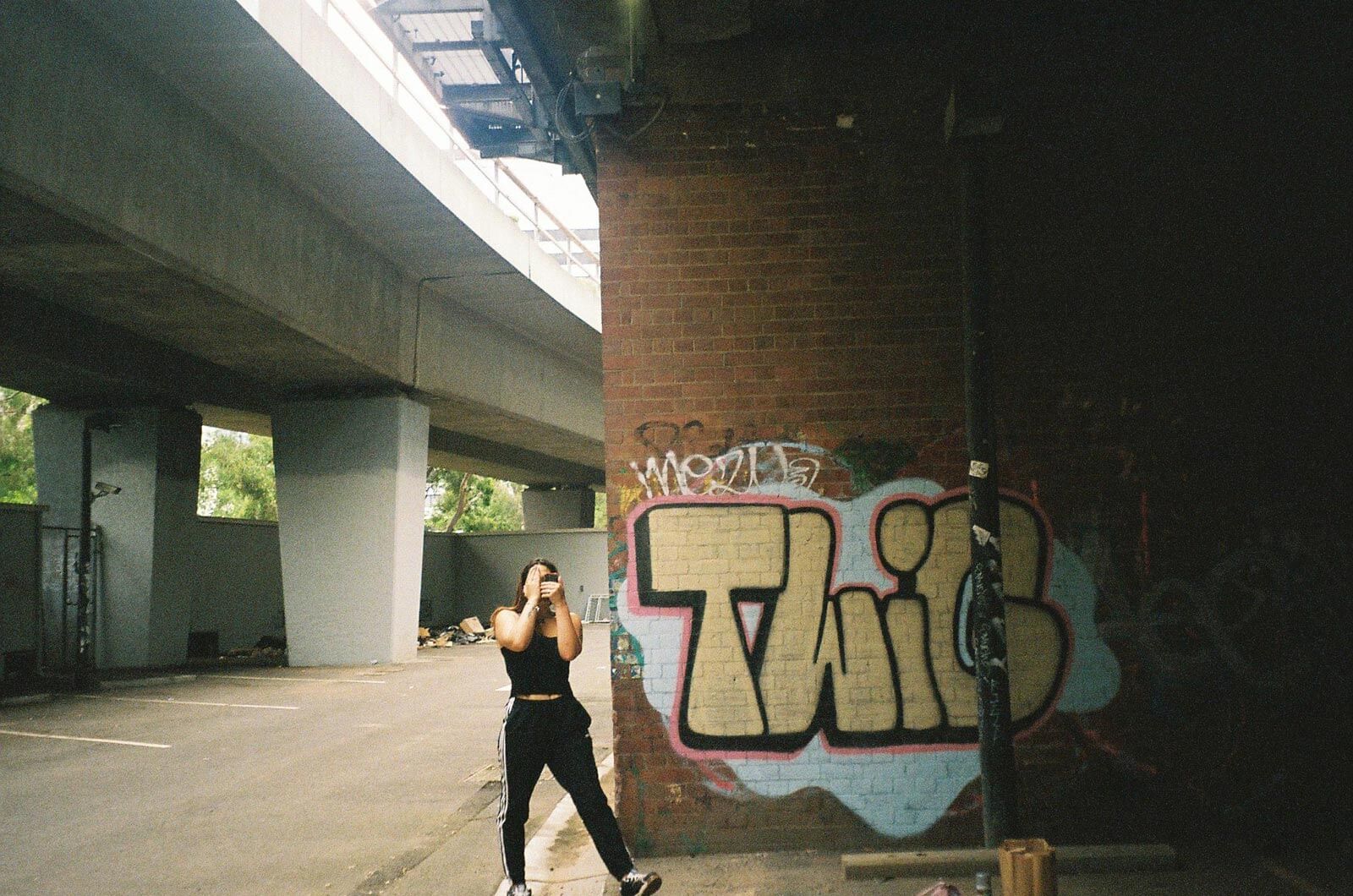 “THE WAY IT GOES” is a video recently launched by TOGO paints, about young New Zealand writer TWIG. The unique audiovisual documentation allows us to accompany the protagonist in her daily life, through an intimate and honest point of view. Viewing the 6 minute production, what makes the clip especially interesting the sincere and human vision of TWIG’s attitude and environment that TOGO was able to capture. So we thought it’d be great to interview her and to get to know her a little better.

– First of all, where exactly are you from?
I am from Poverty Bay which is on the East Coast of New Zealand’s north island.

“I chose the name TWIG because I was going through a really hard time in my life over a year ago and writing was/is therapy for me.”

– Given that your name is an acronym of a phrase, it looks more like the name of a crew than a writer’s name. How did you choose it? What does this phrase mean to you?
I chose the name TWIG because I was going through a really hard time in my life over a year ago and writing was/is therapy for me. It stopped a lot of the suicidal thoughts I was having. Some days it was easier, some days harder and I think that’s just The Way It Goes. Don’t be afraid to ask for help and always reach out to people who you think could be struggling. I can’t express enough that you shouldn’t do this on your own and speaking up is so soooo rewarding. I also loved listening to FKA twigs which helped confirm the name for me.

-Who inspired you to start writing graffiti and who inspires you nowadays?
The first writer to inspire me was easily Pork. He’s got a piece that runs down the side of a silo on Melbourne’s west side that blew my mind. Dankz from Dandenong, Gong and World were major influences, as well as all of RCA, SAS, AFP, GH, TGF, MSA and BC. They all still inspire me a lot nowadays. Especially Dankz. 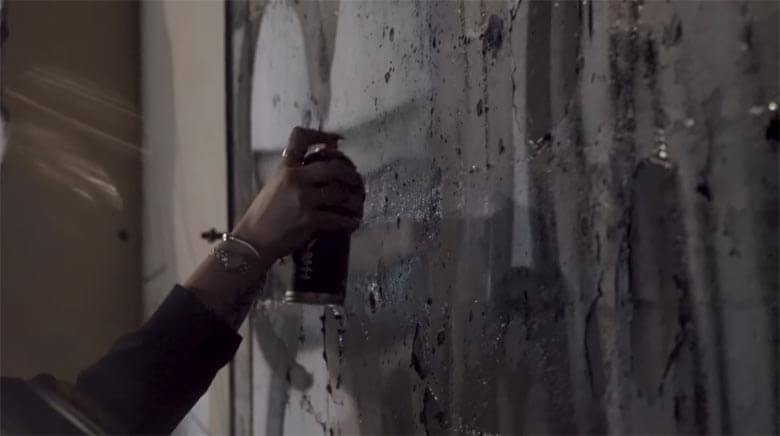 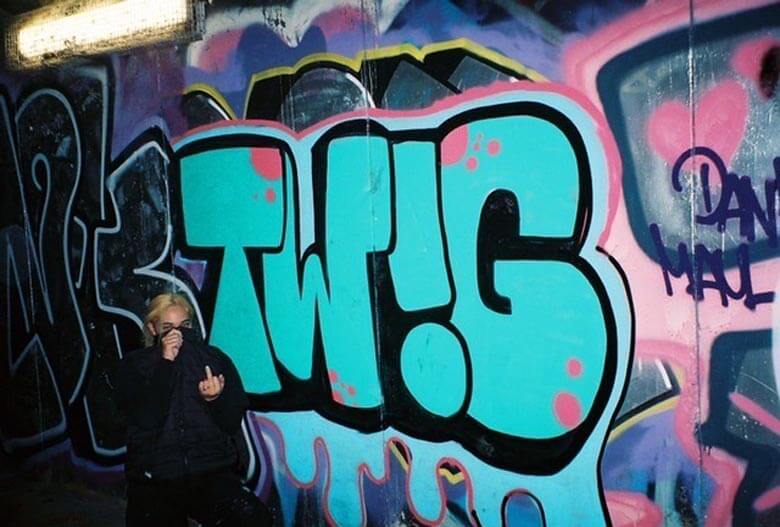 -Do you pay attention to other writers’ work? Do you look for local graffiti or worldwide to the internet?
Yes, and quite a lot. I find it refreshing and I like to open my mind to all styles, everywhere, to try and create my own individual style. But I mostly look locally for guidance and inspiration, and tend to look internationally for female writers.

“I think there’s rules to uploading on digital media too, like not posting in-time photos, and not uploading all of your pieces.”

-Can you tell us a little bit about the scene in your town in NZ, and the role your name plays in it?
I don’t know too much about the scene in New Zealand as I started writing in Melbourne, Australia. However, the scene here isn’t as big as Melbourne’s scene. It’s good in a way, because you can get up in spots that no one has painted before, but tricky because almost everyone knows who you are so it’s harder to remain anonymous 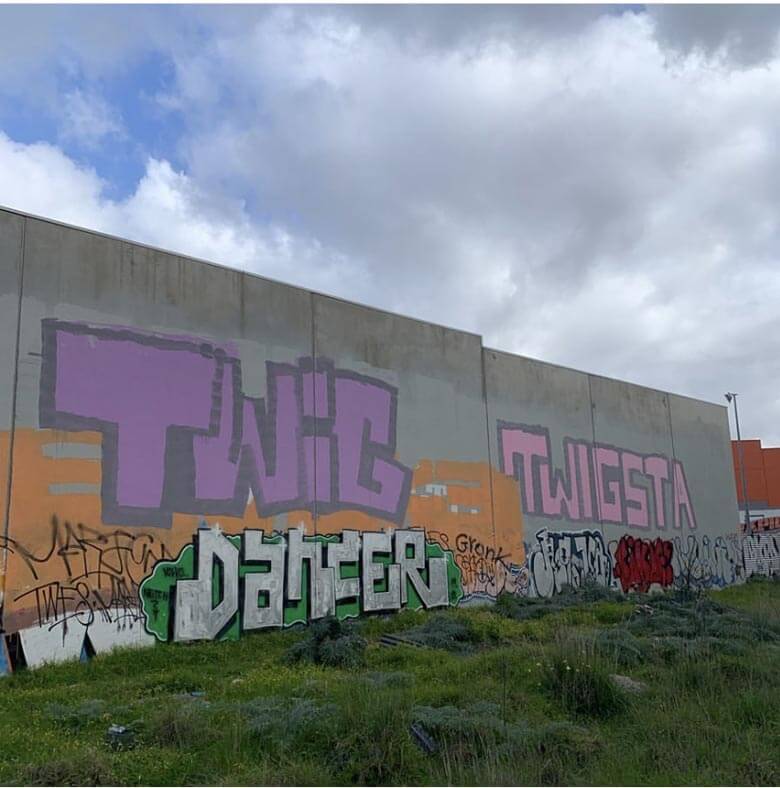 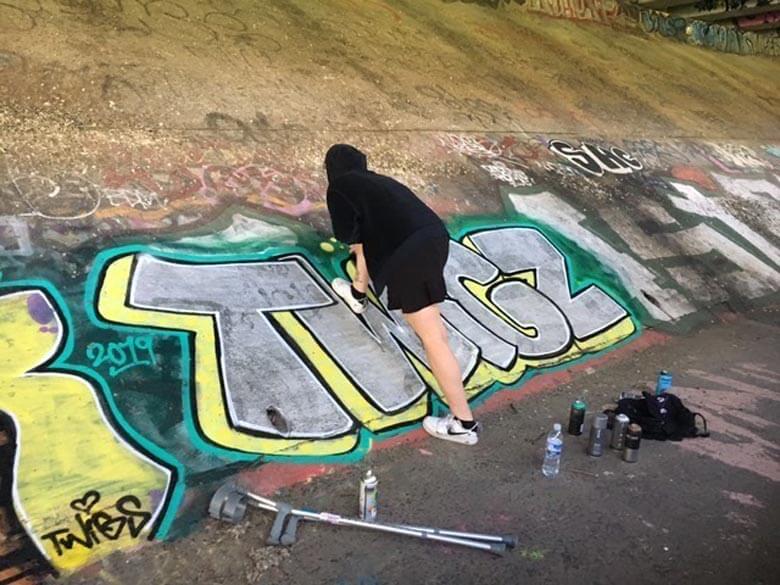 -The video released by Togo paints looks different from other conventional graffiti videos, even from the same channel. The smooth absence of music, the careful photography, and certain moments from your daily life give us a more sincere and personal view of a writer’s life. Why was this video made like this? How much did you participate in that aspect?
The cinematography was ALL of TOGO’s handy work, I gave him ideas on what pieces I wanted to do, but he created all that magic. If anything, I wanted to cut out most of the personal stuff but I’m glad I didn’t because it gave the whole film more of a different flow. Togo is insanely talented and the first time we met was to make this film and now we’re great friends. Shout out TOGO.

“I think my film is a good example of how brave women can be, and I think that’s a bit hard to recognize in a predominantly male dominated sub-culture.”

-After seeing the video, some female graffiti writers told me that they feel more identified with a video like this than with the classic graffiti videos that only show action with sped-up music. Why do you think this is?
I think my film is a good example of how brave women can be, and I think that’s a bit hard to recognize in a predominantly male dominated sub-culture. I feel that the personality of this film shows the relatable, carefree and fun filled adventures that writers have, all extremely risky, but at the end of the day 100% worth it.

-Tagging, roller painting, silver pieces, freights, throws…what’s your favorite graffiti format?
My favourite graff format would be anything that gets me up! Haha but if I had to choose one it would be rollers for sure. 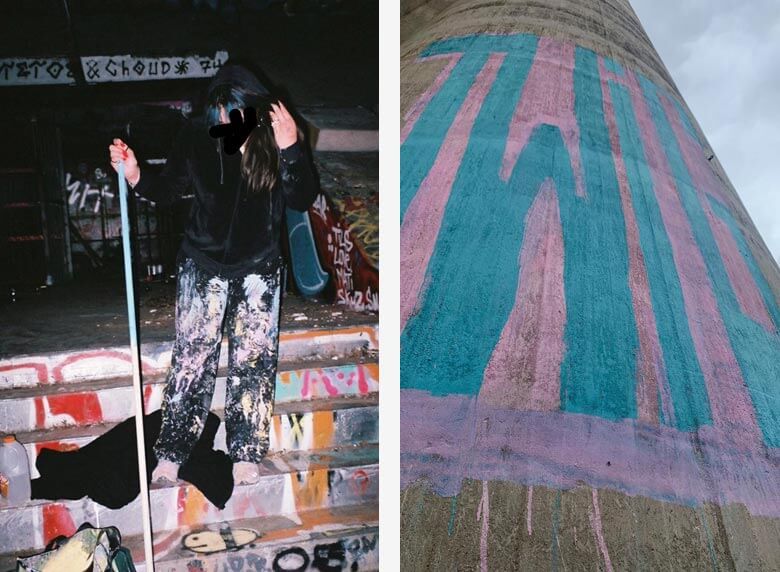 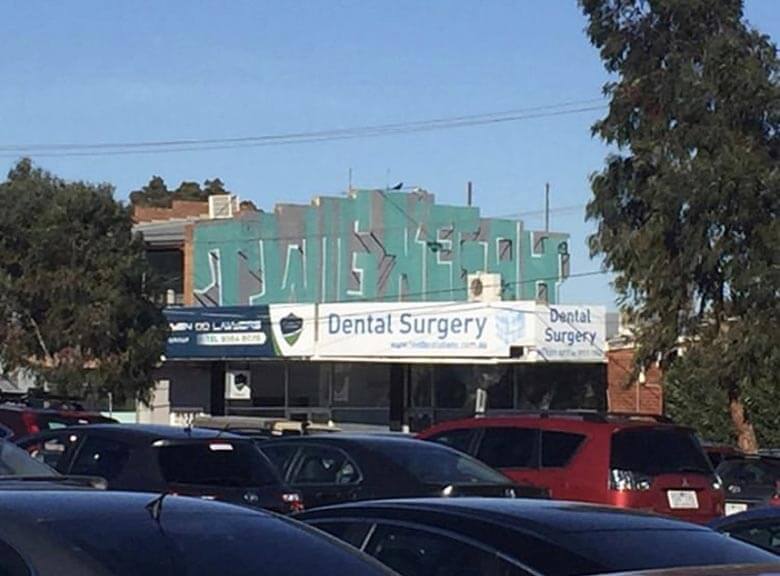 -Who are the other writers involved in the video and what’s your relationship to them?
The other writers in the film are my two best friends IWA9 and MULLY. It was dope because IWA’s first piece was that freight and she killed it! Was cool, calm and collected the whole time, I was the only one spazzin’ out.

-In the video we see alcohol and cannabis consumption. What is the place that these types of substances occupy in your daily life?
I almost never drink alcohol (except for the odd G&T) but I usually enjoy a spliff after a piece — which is almost daily! 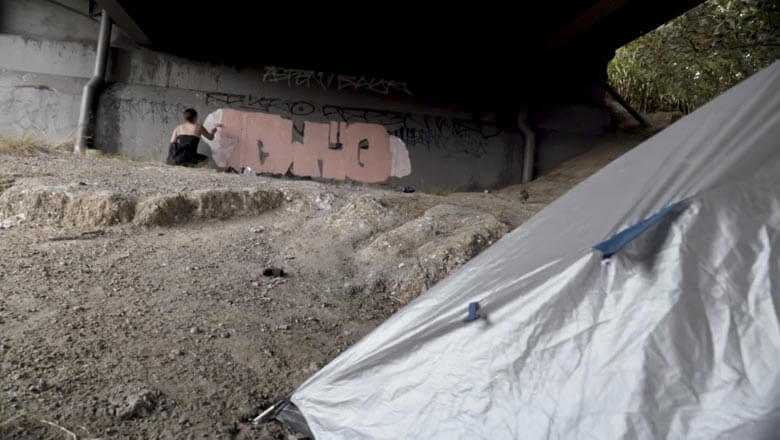 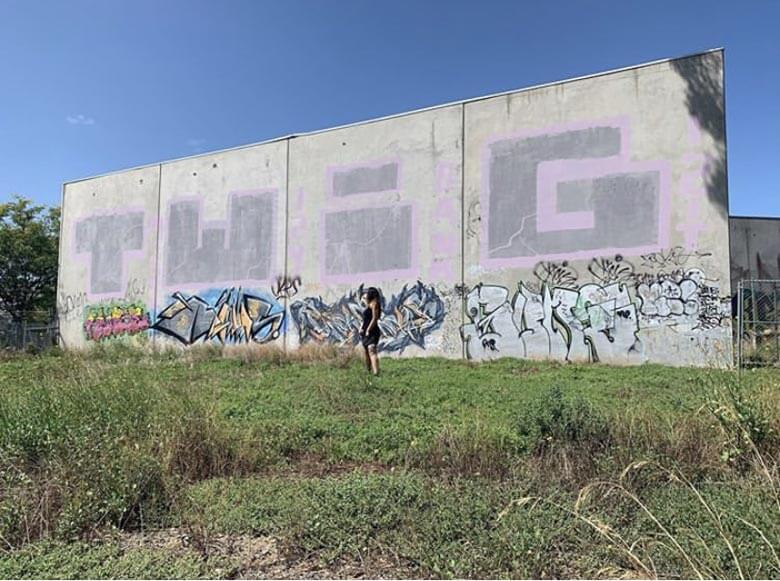 -Favorite lunch?
Mostly anything but I’ll munch a Subway any day.

-Favorite music band?
My favourite is VAYNE from NZ. I also love The Smiths, SL, Happyppl, Young Thug and JackBoy.

-Favorite writer?
Just like my music, it’s impossible for me to choose just one — so i’m going to have to say Dankz & PorkerFkb.

-Where do you see yourself in 10 years?
I see myself finishing my clinical psychology degree. 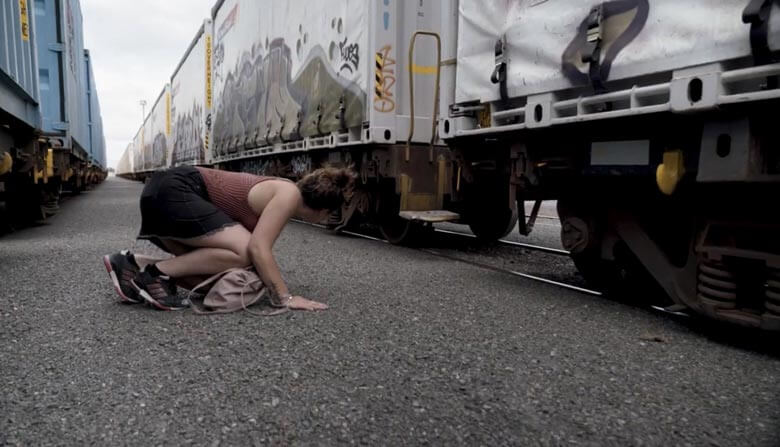 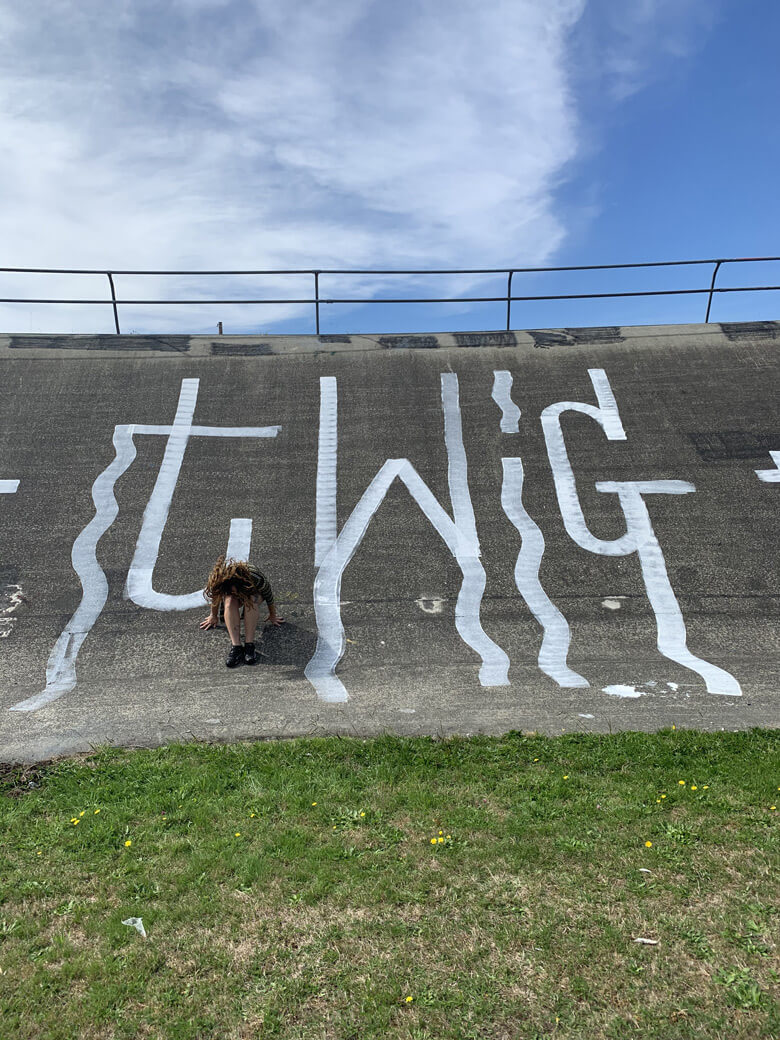