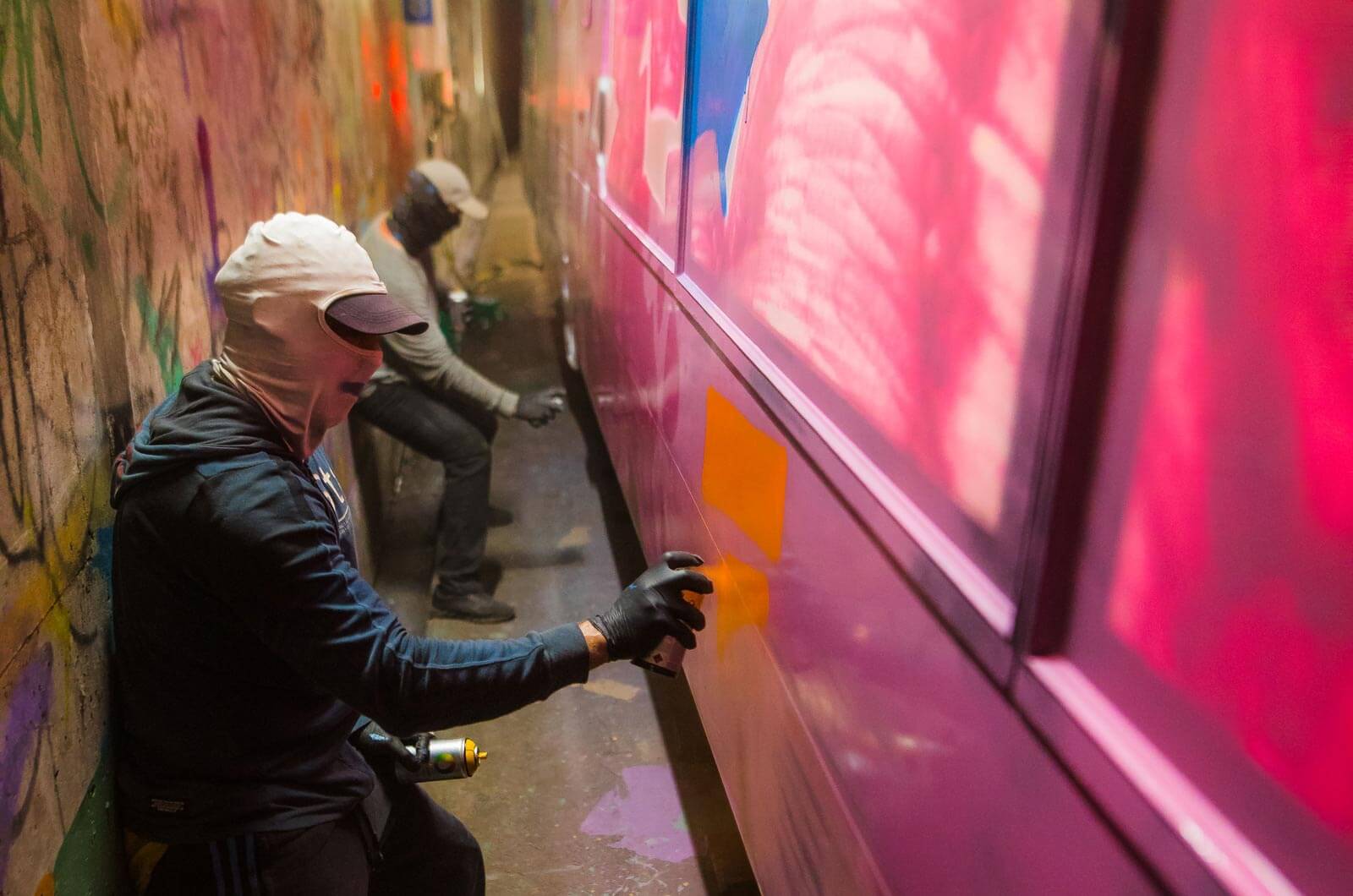 All photos by Jiesk and Suzane Grey

Montana Colors Australia interviews Dave, an Australian writer who has given us plenty to talk about in recent weeks.

In the middle of April, Spray Daily released “Dave and Friends,” a short production that compiled some missions on the gigantic trains of Sydney, perpetrated by the writer Dave and his henchmen. Our ambassadors on the island of the kangaroos have reached out to the protagonist for an exclusive interview…

-What got you started in graffiti/street art? Was there a particular artist/person who motivated you to start or inspired you to pick up a can?
In high school I skated and was at the local skatepark most days, I had seen graff there for the first time. I tried graffiti then and I got caught by my mum one day when she picked me up, and she took me to the police station where the Sargent scared me out of it for a while. I still was so captured by it and got more into sketching than actual painting. I then was reintroduced to a can by a friend, KONA, and tried to do a piece at a local abandoned factory where I got stung by cops! So not a great start…I persisted to keep going anyway and I am where I am today.

“New York style is my favourite style to do. It’s local but still keeping it pure. I think that these styles are also the most challenging because they’re so public, the errors that appear can jump out at you so easily”

-What’s your favourite style? What do you like to do the most, and what is the most challenging style for you so far?
My favourite is New York, because that is where subway art was from and to me this is the purest form of graffiti. I think Sydney style that has evolved from New York style is my favourite style to do. It’s local but still keeping it pure. I think that these styles are also the most challenging because they’re so public, the errors that appear can jump out at you so easily especially with structure and proportions, whereas a wildstyle piece is easier to get away with mistakes. 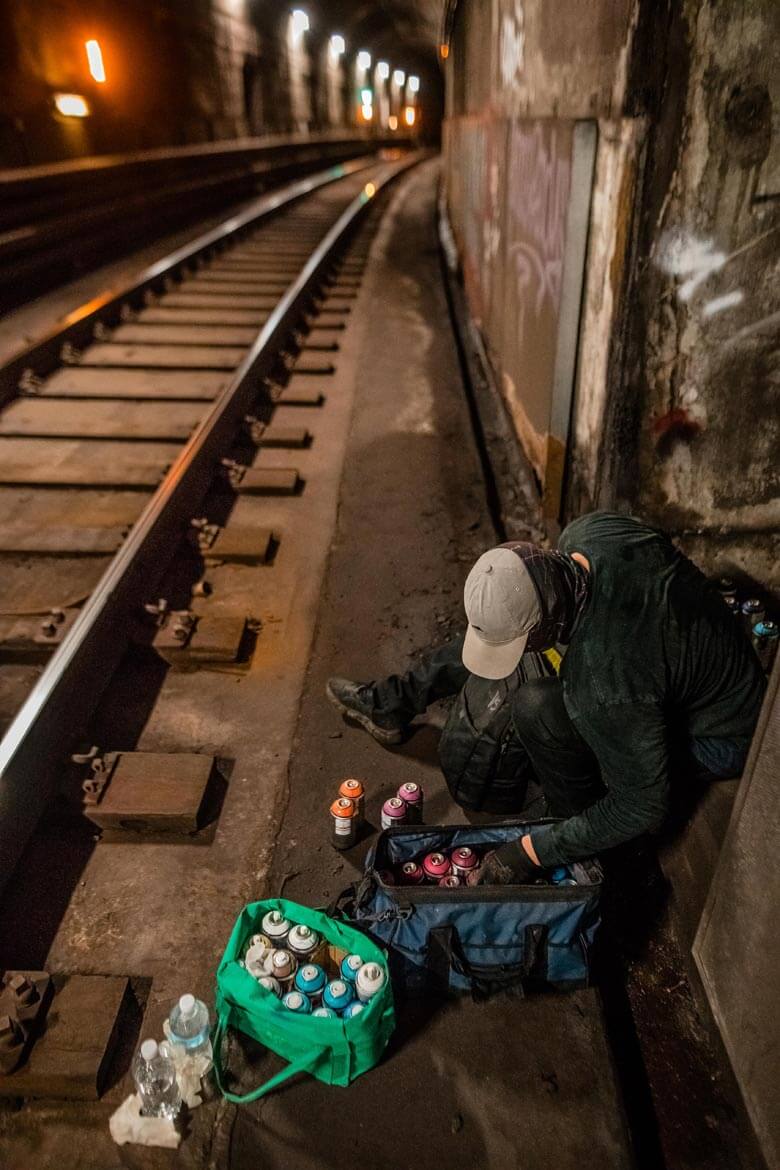 -Are you painting for pleasure, or do you have a purpose or goal to achieve with your art?
Pure enjoyment for subway art!

-How often do you find yourself painting, and what is the most enjoyable subject matter for you to paint?
I paint almost daily and it’s all about letters!

-Are there any artists you are keeping an eye on right now?
Zombe is always sketching! It’s good to see, especially in person. He is the most passionate graffiti writer I’ve met! 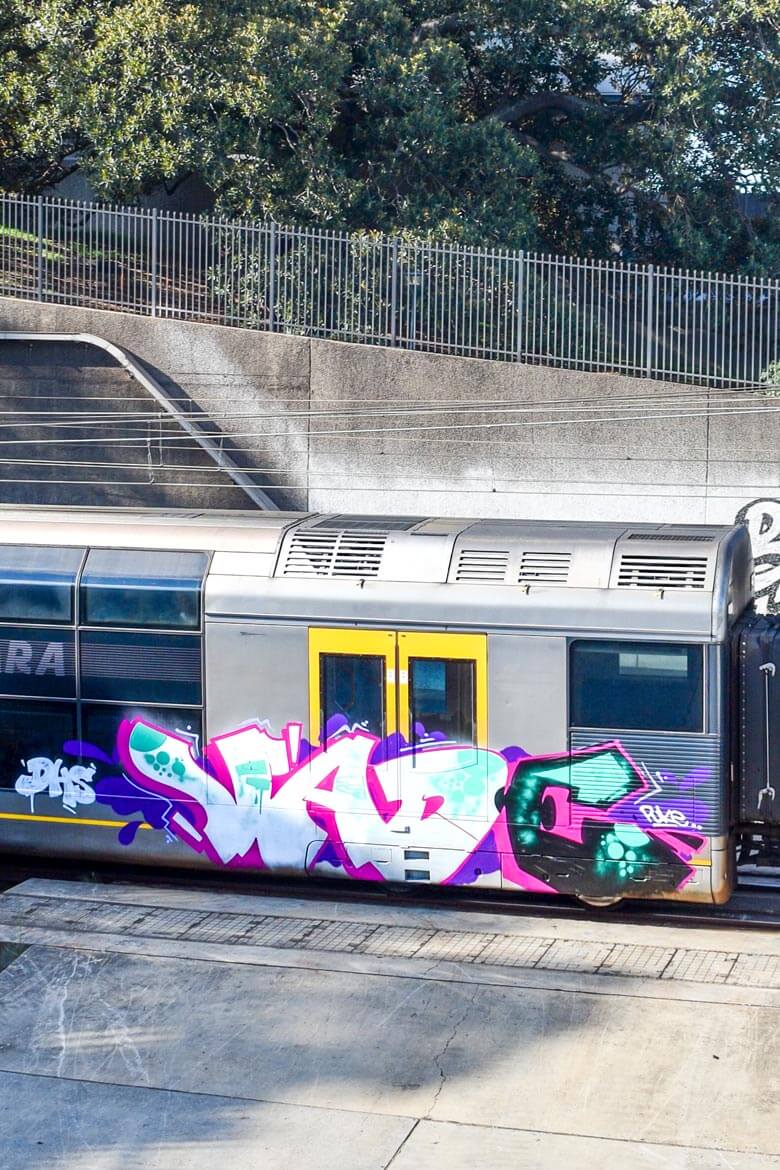 -If you could paint with any artist right now, who would you want to team up with?
Scram, Sydney legend.

“Dondi or Seen they didn’t do the most cars, but they were the best cars.”

–In your opinion, what artists do you think are killing it right now?
I think that anybody who is consistent is killing it. Consistency is the key to a successful writer in my opinion. It’s also about the quality over quantity rule for me. When you look at the most successful writers like Dondi or Seen they didn’t do the most cars, but they were the best cars. 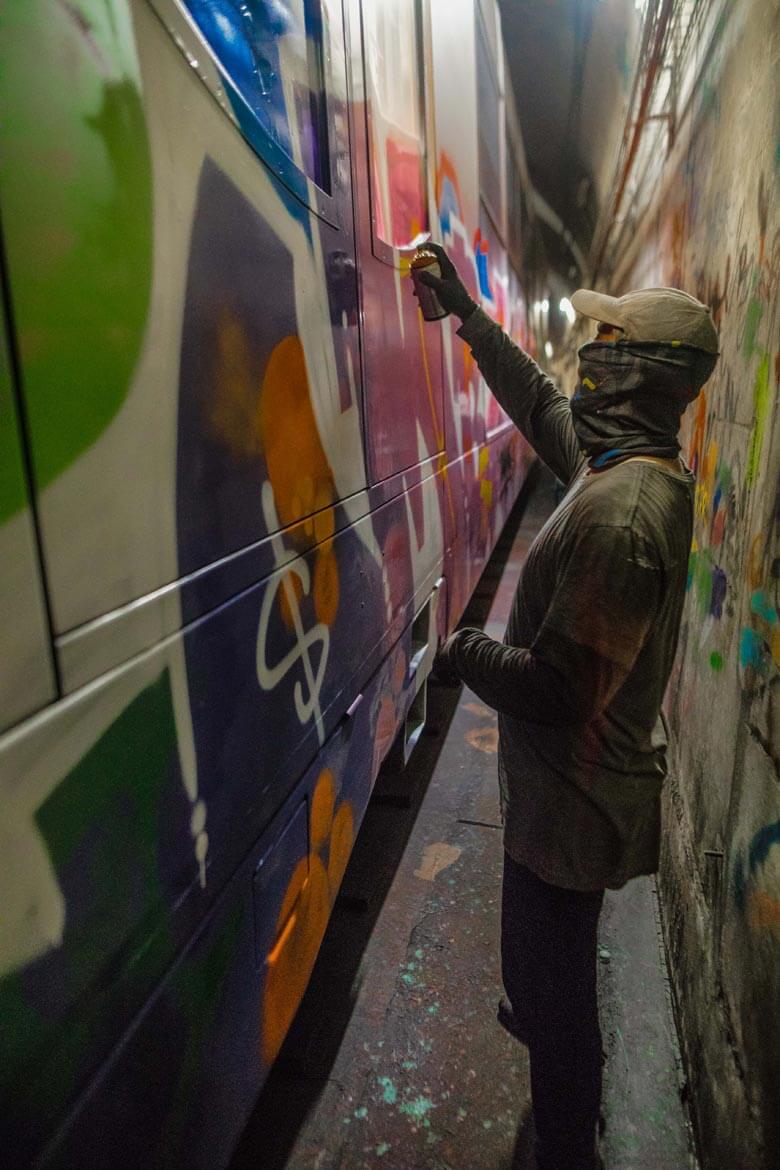 -What’s your favorite/most used cap?
Orange Hardcore fat cap. I use it for filling and outlining !

“it’s about the letters not the colors!”

–If you could choose only one color palette – what colors would you use?
Greys because it’s about the letters not the colors !

-You have one choice of paint, MTN 94 / MEGA / Hardcore / Water Based – which will you choose?
Water based. 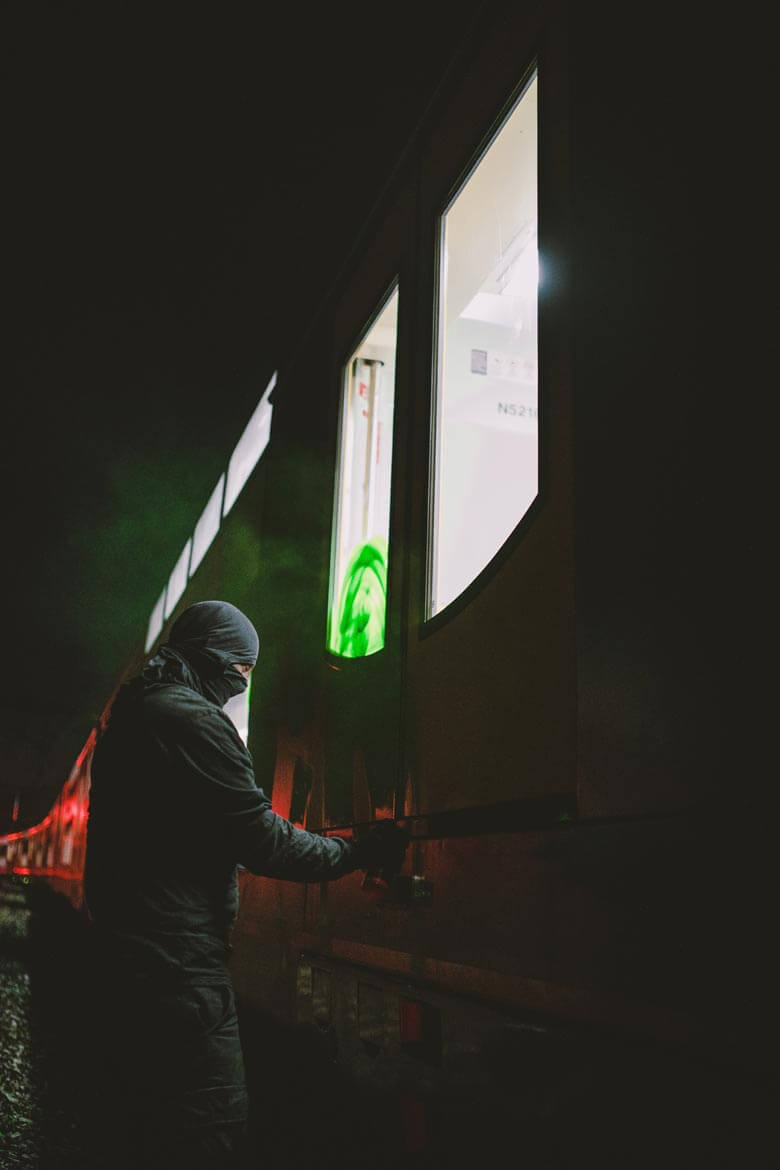 -If you could choose anywhere to paint, where would you go?
Sydney, best trains in the world.

-What was your most favourite piece/art done so far?
Zombe Dave Part One.

–What is your perfect painting day?  What was your worst painting experience?
Perfect day was getting that first end to end with Zombe done! We used 8 colors for the base fill, 4 colors over top and a 3 color background. We did it together in 26 mins. I checked my watch and turned to Zombe and said “Mate, we still have 15 minutes” — he straight away gave me a hug and it’s a moment I will never forget. He then said to me “There’s nothing more to do, we have pumped this carriage!” Being able to paint with Zombe in a place where he’s done some of Sydney’s best panels was the greatest moment of my life and a moment that I will always cherish. 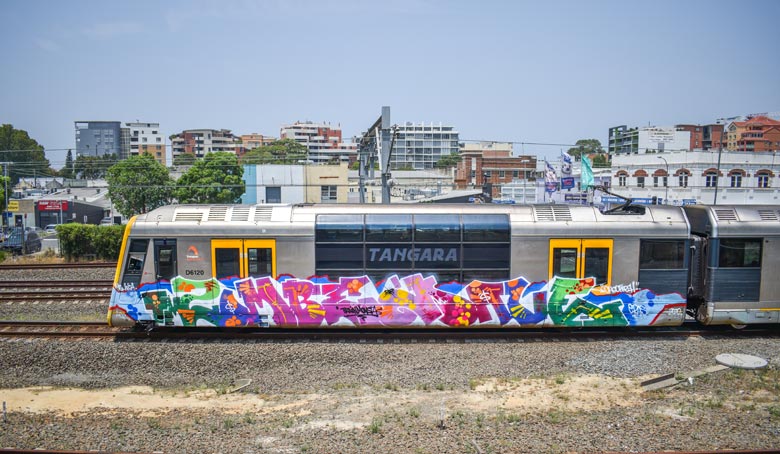 “4 cops popped around the front of the train and they sort of stalled for a second, maybe they hadn’t been this close to writers before realizing they weren’t small kids.”

As for worst I’ve had a few chases, but the worst one was at a local layup where myself, Floss, and Elude were painting, and Jiesky was there taking photos. We had spent 14 minutes or so painting. We were finishing up and it all was going too good, until we saw some flashes of light on the other side. Floss started scaling the wall behind us and I ran to grab my bag (I was on the guard-o). 4 cops popped around the front of the train and they sort of stalled for a second, maybe they hadn’t been this close to writers before realizing they weren’t small kids. I left the bag and myself, Jiesk and Elude started sprinting up the layup, we got past the front and headed towards the fence. As we got close there was another paddy wagon rocking up. Jiesky threw his camera gear into the bush to make it easier to run and we ran for about 20 minutes, jumping back fences. We got to the beach where we worked out our next move. Jiesky and I started waking up the beach and we turned to see multiple torches up on the headland coming down to the beach, so we started jogging on the beach. We got to the other side and another paddy rocked up there with 2 cops looking around with torches. We darted across back onto the tracks where we ran for a further 13km before sleeping. 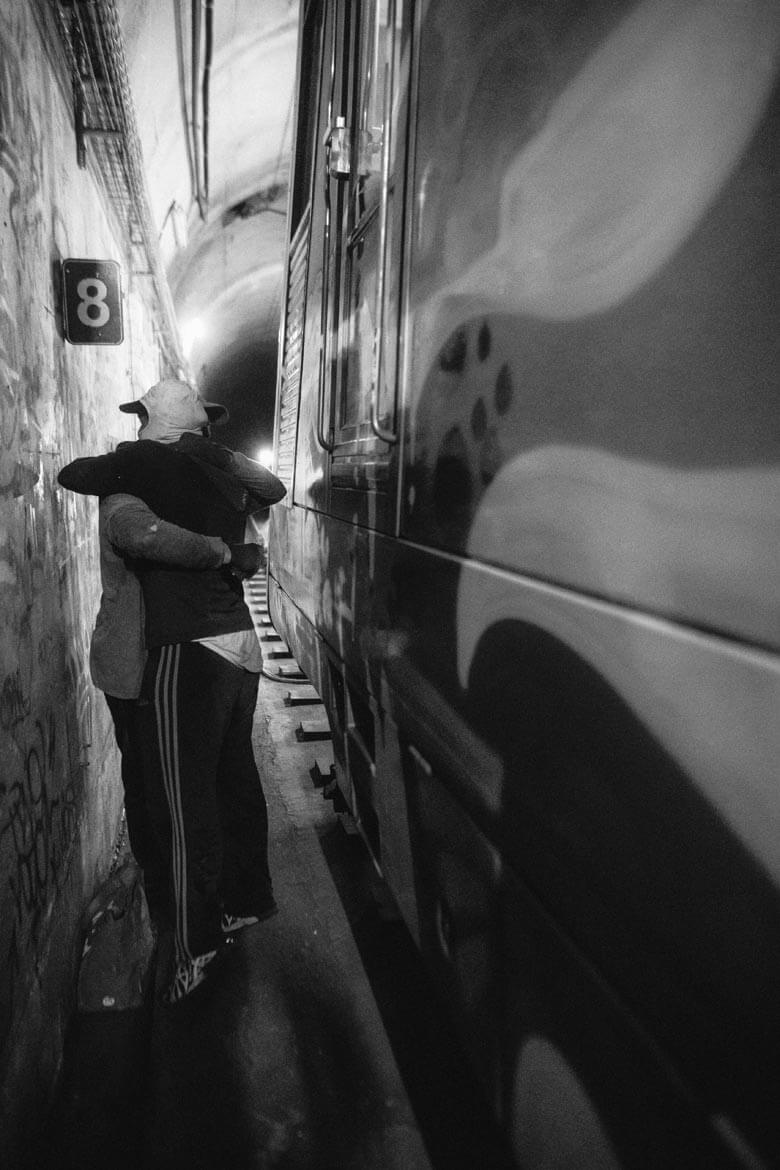 -Lastly, What soundtrack you got bopping while you paint? Can you list 5 tracks to share with the MTN family?
Dauntless – Muzzle
Black Sun Empire, Noisia – Arrakis
Noisia, Mayhem, KRS One – Exodus
Noisia – Mundus Theme
Dauntless – Erasure 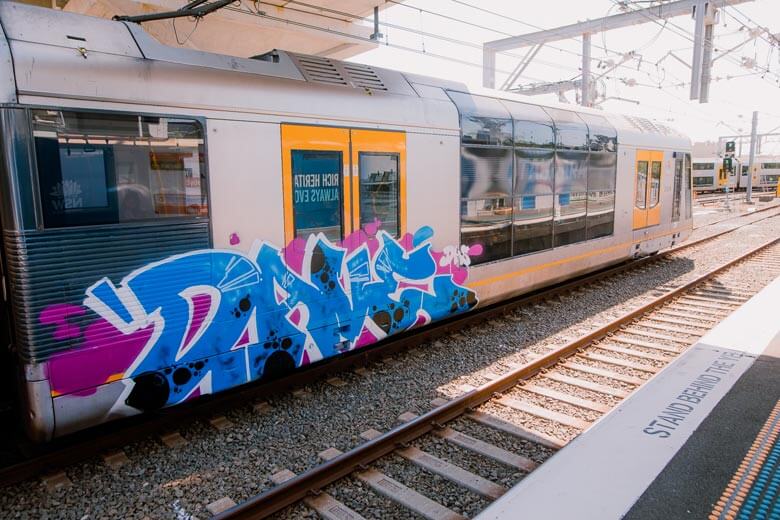