TOGO FILMS HIMSELF AND WE INTERVIEW HIM 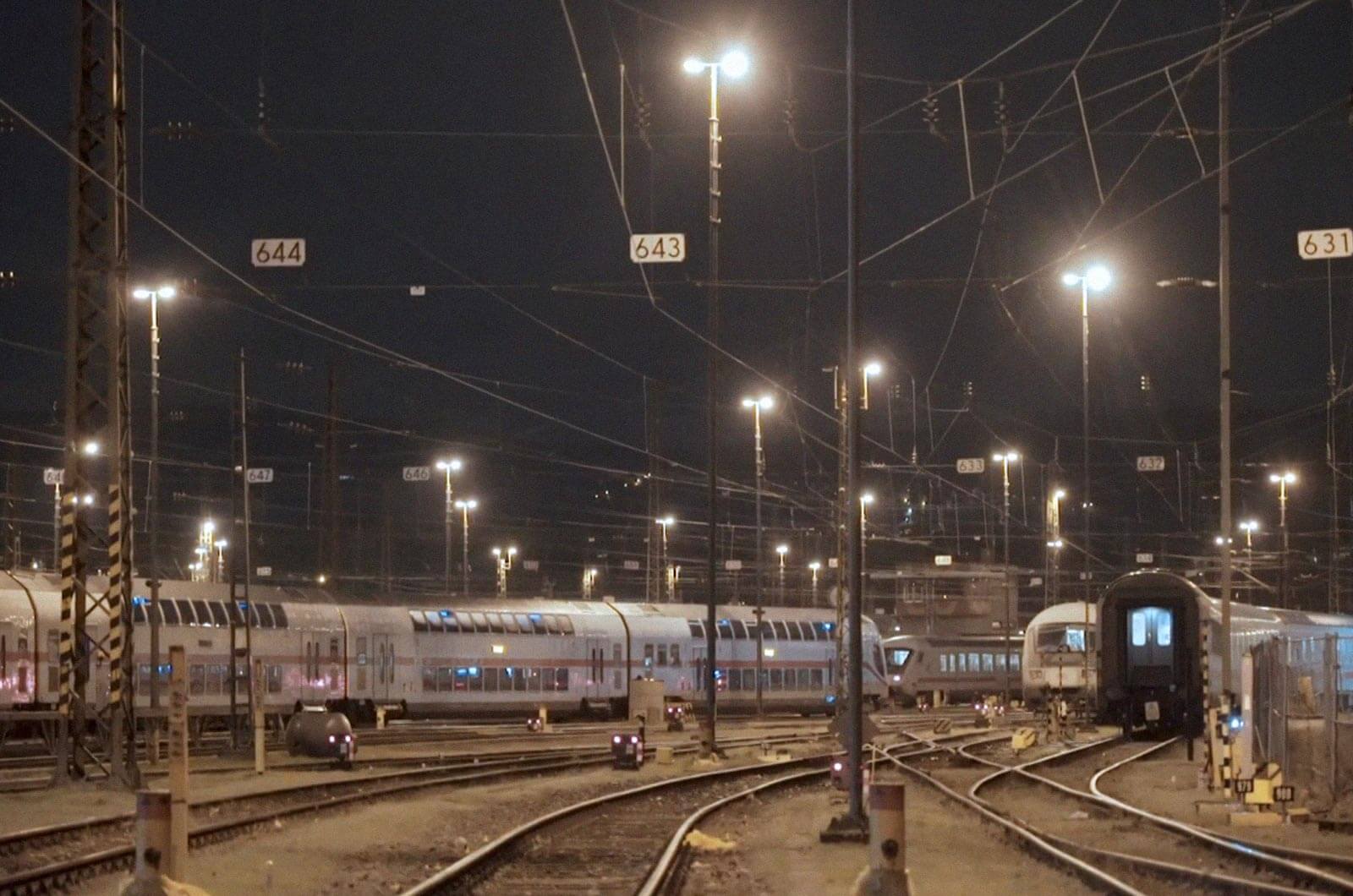 TOGO, the New Zealander who we remember as the creator of several videos about graffiti writers (such as Boroe or Twig), stands in front of his own camera. He serves it up raw and uncut, creating an audiovisual self-portrait with his characteristic and provocative style, in which he takes the opportunity to show us the experimental evolution of his graffiti through various missions around Europe. We took the chance to talk to him about this production…which you can read all about in the short interview below.

-It’s not your first time in Europe…what can you say about the peculiarities of painting trains in Europe compared to other places like New Zealand?
Europe has a very open attitude towards painting. This perspective makes it fun, enjoyable and much more accessible than in other places. When I first arrived, I was chatting with a businessman who was jokingly giving me tips on spots. That would never happen back home. Everybody seems more welcoming and appreciative of the art form, which in turn shapes the place as a leading artistic and cultural hub.

-Did you paint all of the actions alone? Why?
I did paint over there with the brothers Flues & Osco, but all the actions in this video are alone. I mostly paint by myself, I enjoy the challenge and discomfort of it. There’s nothing like delving into the unknown by yourself.

-Did you record all of the actions by yourself?
Yup, just put the camera on a rock and go for it.

-Painting and filming…how do you achieve a good balance in both areas?
I usually like to do one or the other. Painting and filming sucks. You’re on this intense mission while trying to work out all these other aspects like angles, lighting, ISOs and apertures. You’re looking at this screen inattentive to what is happening around you. It gets done, but I wouldn’t say there is a good balance when trying to do both. 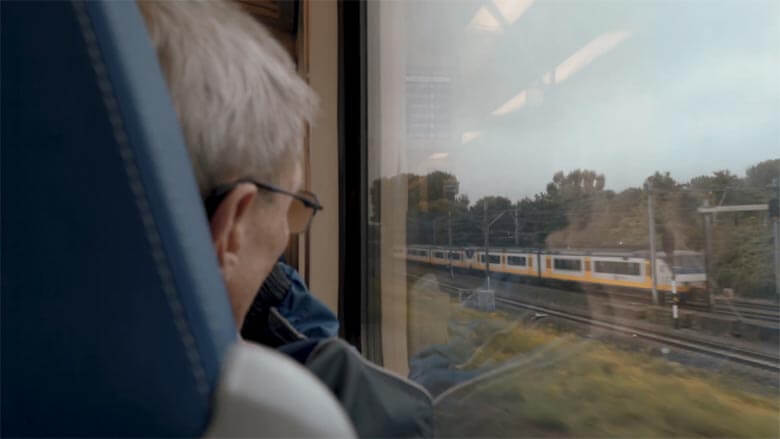 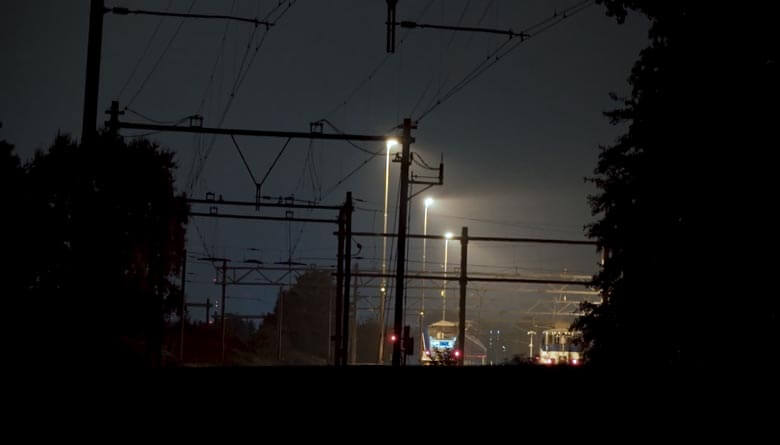 -How do you choose the circumstances that you’re going to record in, and how you’re going to do it? Do you think about what to transmit and then you film, or is something more spontaneous?
Everything is unplanned and instinctive. I tend to just film everything and deal with it later. If a story starts to emerge, then I think more about how to develop this, but I haven’t found a romantic comedy in this graffiti foolishness yet.

-Did you get in any trouble or chases?
Nothing intense. In the video in Belgium, I had just finished my piece when a security car pulled up. I quickly ran and jumped on my bike which was hidden in the bushes. I was boosting down the path towards the road when I saw a flashing blue light ahead. I’m not actually too sure what it was but I wasn’t taking any chances so I turned around and rode back towards the security car. It was perfect timing as they must have been on the tracks so I cruised straight past the car and continued down the path. There was a little black cat ahead that ran into the bushes so I followed it in there and with my new buddy, waited for an hour while getting rid of all my empties and caps. Meanwhile it started raining heavily and my phone ran out of battery so when I finally emerged I was super soaked and wonderfully lost. It was a long night but great success.

-And any mishaps with your material?
I got stopped at the German border and my bags searched. I was sketching out because my bag contained heaps of spray-paint and a camera full of footage and flicks. They opened up my bag to find that one of the cans had exploded so it absolutely reeked. They quickly closed it back up and told me to get going. Phew! 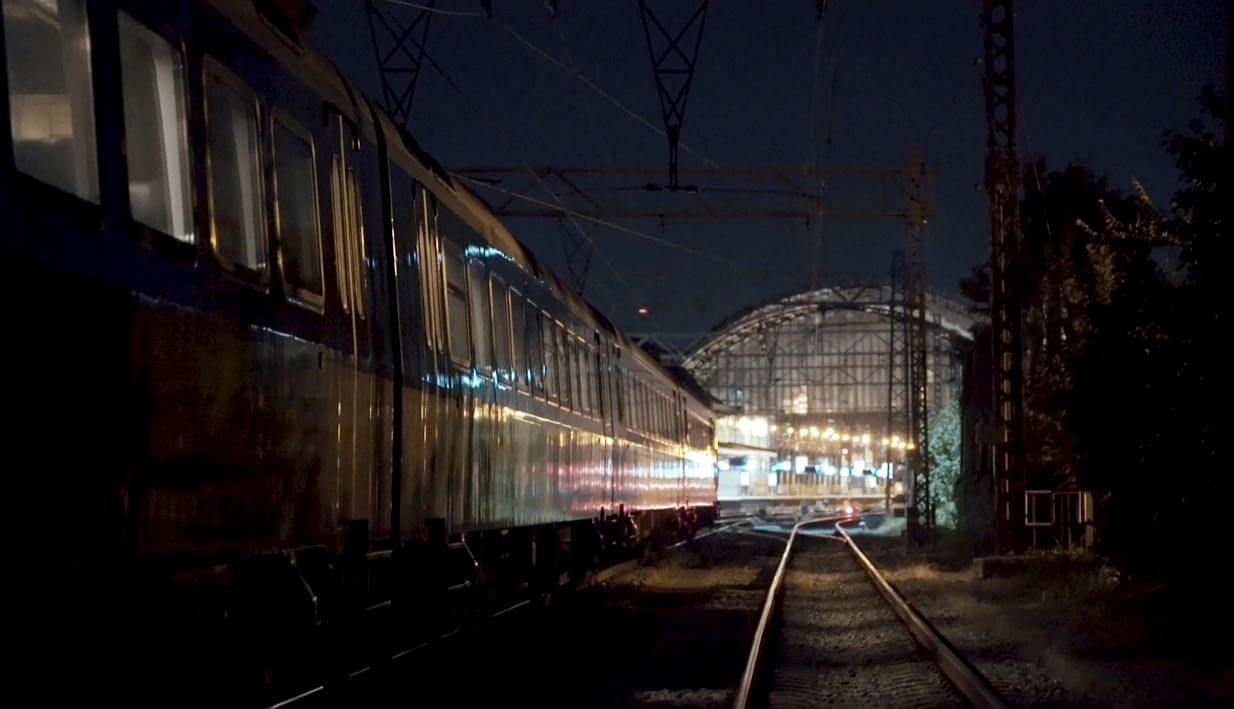 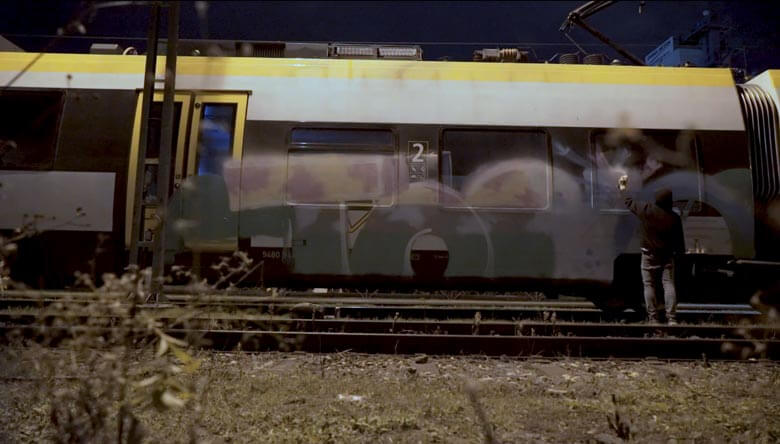 -Let’s talk about your graffiti…what kind of influences push you to do the experimental style you show in the video?
I come from a small city, in a small country. I started doing these experimental pieces as a way to shake authority and not attach my graffiti to any specific name. I wanted the pieces to still hold that dirty, graffiti aesthetic but I was never pleased with how they turned out. When I started painting them on trains, it just worked. Something about the pressure and not having any time to think just made them go.

I would say it’s more abstract than graffiti, but it’s fun to just throw paint. To not have anything planned and that’s the beauty of it, is you can just paint something and it doesn’t have to be good or bad.

-The best and the worst parts of this whole experience?
The best – The shawtys
The worst – Cracking jokes and none of the shawtys understand 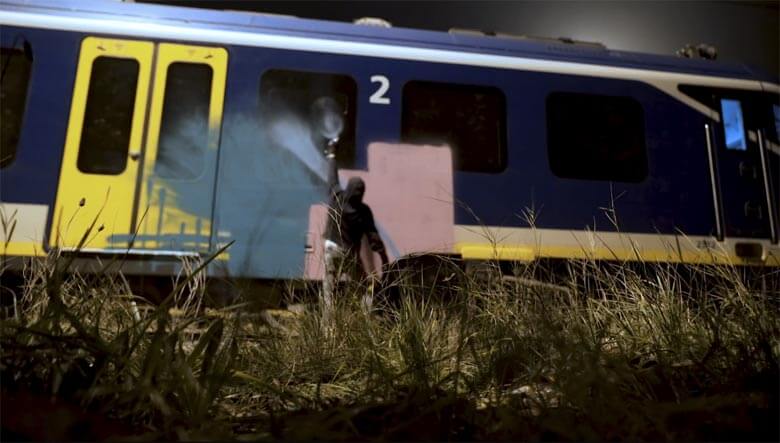