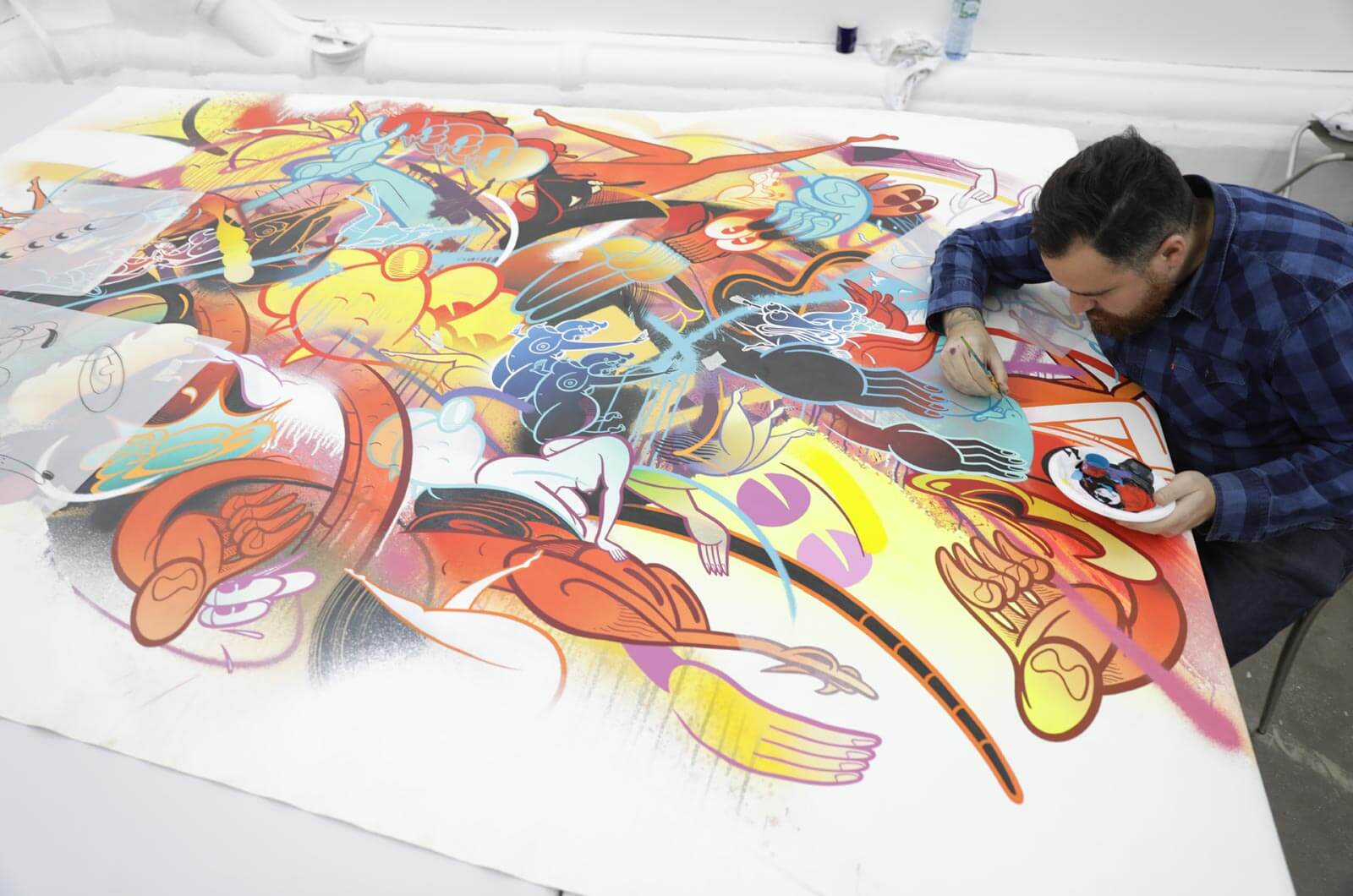 Paying tribute to Baudelaire, our colleagues over at Drips have re-baptized the interview we published in the second issue of Tramontana magazine dedicated to Rime by Dr. Dax, by the name “Artificial Paradises”. The French portal makes this exclusive material available to the French-speaking public, so we’ve done the same and also added some unpublished images.  This publication comes just in time for the announcement of the next exhibition by the artists of the MSK crew, repeating in the Galerie Wallworks, whose first exhibition in this space is discussed in interview that this report covers.

Remember that in order to download the past copies of Tramontana for free, you just have to send an email to hello@tramontanamagazine.com to join our mailing list.

My name is Dr. Dax. A few months ago I set out on a cross country journey through the United States to clear the mind. When I completed my trip, upon arriving in Los Angeles, I ran into Rime. And since this day he has led me into multiple DMT ceremonies, microdosed mushrooms, overdosed mushrooms, deprivation tanks, tarot card readings and ayahuasca ceremonies in multiple cities, states and countries. All in which has made me stronger and happier, ending here in Paris at Galerie Wallworks while he prepares for Children of Ourselves. This is where we will take a deep yet small glimpse into the current on going spiritual journey of Rime MSK.

Reconnecting with this planet

I’m here in Paris doing a three month residency, preparing for my next art show called Children of Ourselves at Galerie Wallworks. The work is a series of paintings that’s heavily inspired by my spiritual journey. I feel like as an artist and someone with a long standing career in graffiti, we go through all this effort to become a master of our craft. When we reach a final point where we master what it is that we do, we may hit a ceiling with where we’re at. We learn all the fundamentals, the rules, traditions, and then we just do better and better versions of what we are known for. But then I started to think well, where do you go from here? If you’re a master of your craft, how could you go any further? So then I went with this belief that maybe what’s beyond is break- ing those rules and trusting intuition, or just straight up abandoning tradition and being hyper aware of it in the moment. So, I started to approach graffiti from more of a spiritual perspective and found myself to be making much bigger strides creatively and then developing a very regimented and disciplined studio practice. I started to allow in the influence of what I’m doing on canvas onto walls or other surfaces. This year I’ve just been very busy. In 2018, I’ve done two solo shows and some group shows making work that’s heavily detailed. Some of my paintings that I’ve been doing these days could take a half a year or more to produce. I’ve set a challenge for myself to avoid incorporating letters into a lot of these paintings. But I feel like the aesthetic formula, or flow of these paintings have become heavily influenced by my background as a graffiti writer. Word. 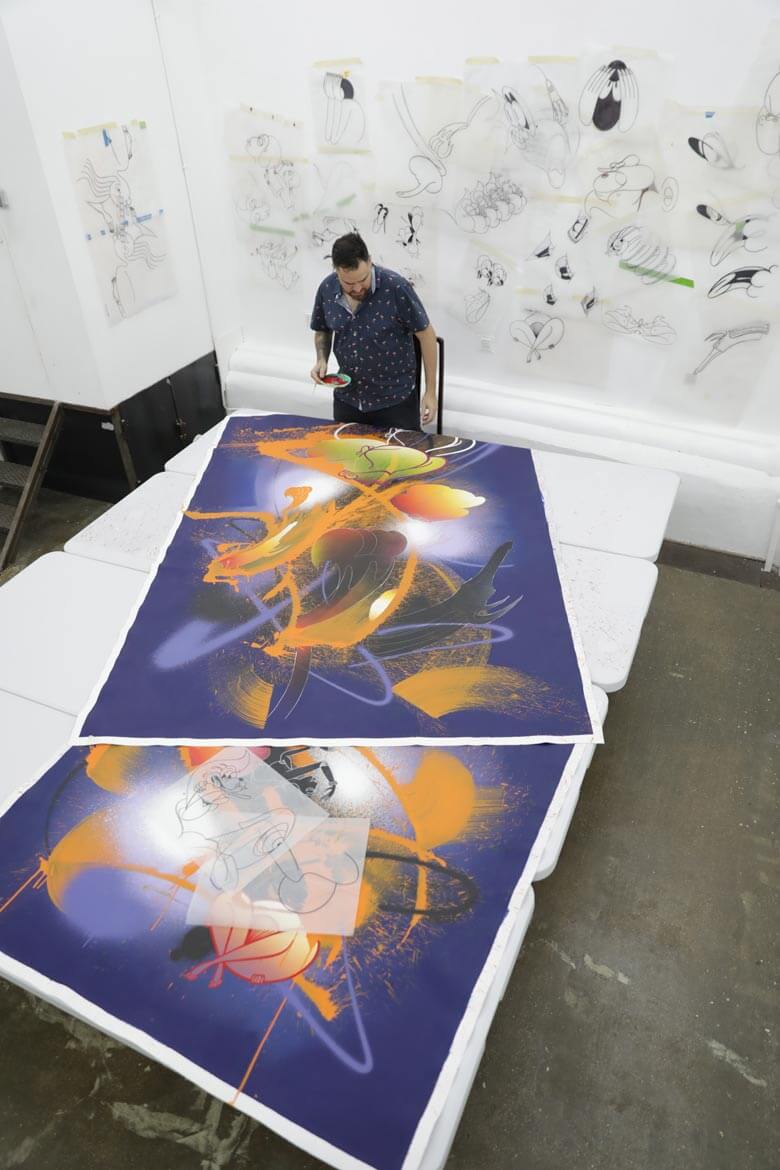 I never really considered myself to be formally spiritual or anything like that growing up. I was forced to go to Catholic church- es as a kid but didn’t feel a deep emotional connection to the church. As a kid I would ask questions and would be tremendously unsatisfied with the answers. And the answers that I would get from family who was religious, or nuns, or priests or whatever, they would tell you if you don’t believe, you’re going to burn in hell. So as I became a teenager getting into graffiti, my way of rebelling against these sort of systems of control was to say I don’t believe in any of it; I’m an atheist. I kind of took that stance for a while and just sort of felt like when you die you die and that’s it. But as time went on and I started traveling the world and expos- ing myself to ways of living that are outside of what I grew up with. As time moved on, I began to think there’s definitely got to be some other beings out there in the universe, we can’t just be the only ones floating on a rock. I just accepted other types of physical possibilities of life outside of this planet. But in my thirties I became open to trying mush- rooms. That day I was at a house party in Austin (Texas), and people were in the kitchen brewing some mushroom tea and playing dice for cash. 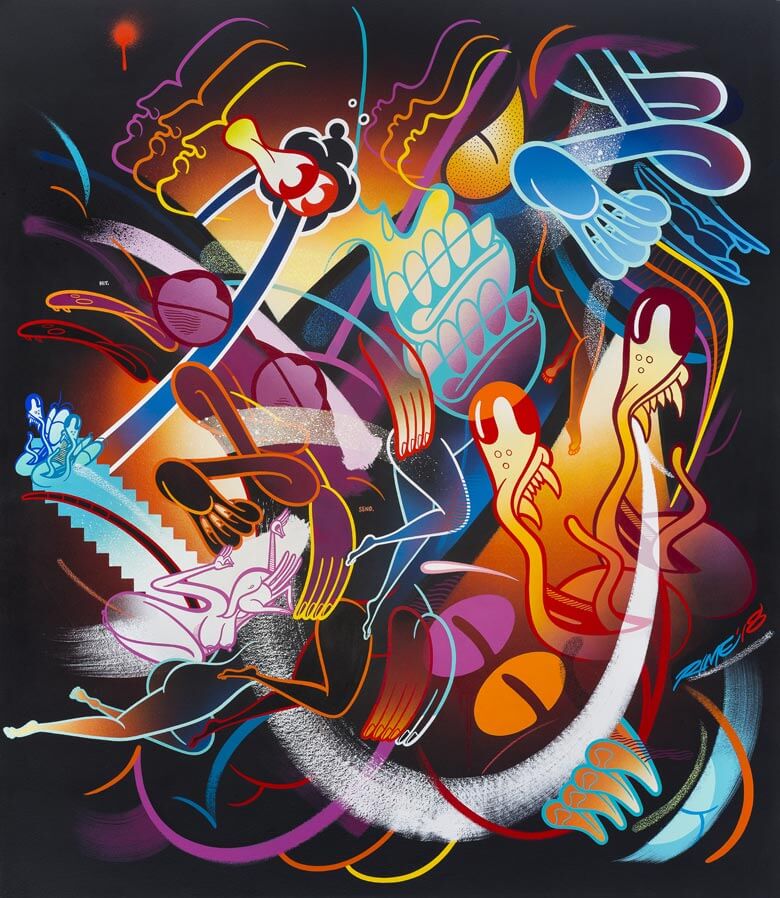 No, I didn’t know these people but brewing the mushrooms, but I was with Risk and Revok from LA as well as a couple of other guys I met from Texas. I was offered this mushroom tea as everyone else was doing coke and all this other stuff… I’ve never done cocaine or any of these more heavier drugs. So I just sort of associated mushrooms with being a heavy drug that I was afraid to do. But I ended up drinking this tea after some coaxing and was surprised at how different it was from weed or alcohol. It fired up my mind and I got to thinking. I remember being very impressed by mushrooms and wanted to do it again. Over the years, if I found some mushrooms I’d eat them and I found it to be a wonderful thing to do while making artwork. The practice would continue off and on over the years while making paintings and stuff like that. As time moved forward, people were telling me well if you like mushrooms you’ll like DMT, but I had no idea what DMT was. I started researching it and found out it’s called Dimethyltryptamine, it’s suspect- ed to be produced in our body already and is found in most living things. Finding it was hard. It took me maybe about 4 years, from the time that I heard about it to the time I actually received it in my hands. When I did get it I had no idea what it looked like or how to do it, and that first time I tried DMT it didn’t even work! I was very puzzled by the lack of effect and came across this online information that said if you don’t prepare for it or if you’re uncomfortable, or if you don’t focus into it then it won’t take effect. I ended up doing it again a year later after three months preparing to do it, and it finally worked. And as I continued to do it over the course of that year I started to experience things that were not the effect of my memory. I started to feel like, what you tap into when you do DMT is something outside of yourself. As if you’re a phone with no wifi signal… all of a sudden rapidly connected to the internet.

Ayahuasca is a scary, loving and sobering medicine. It is a way to reconnect with this planet. From it you may come to the conclusion that we are all of the same source.
That we are all in and beyond this concept of “God”.

Absolutely. Getting that connection and having these profound experiences that were extremely educational, extremely in- spiring on an art level; meeting entities and seeing things associated to sacred geometry. Those things happening really changed my perspective and I felt like I received an affirmation through DMT that there was something further to this whole idea of living. And that led to ayahuasca, and that was a whole new ball game. 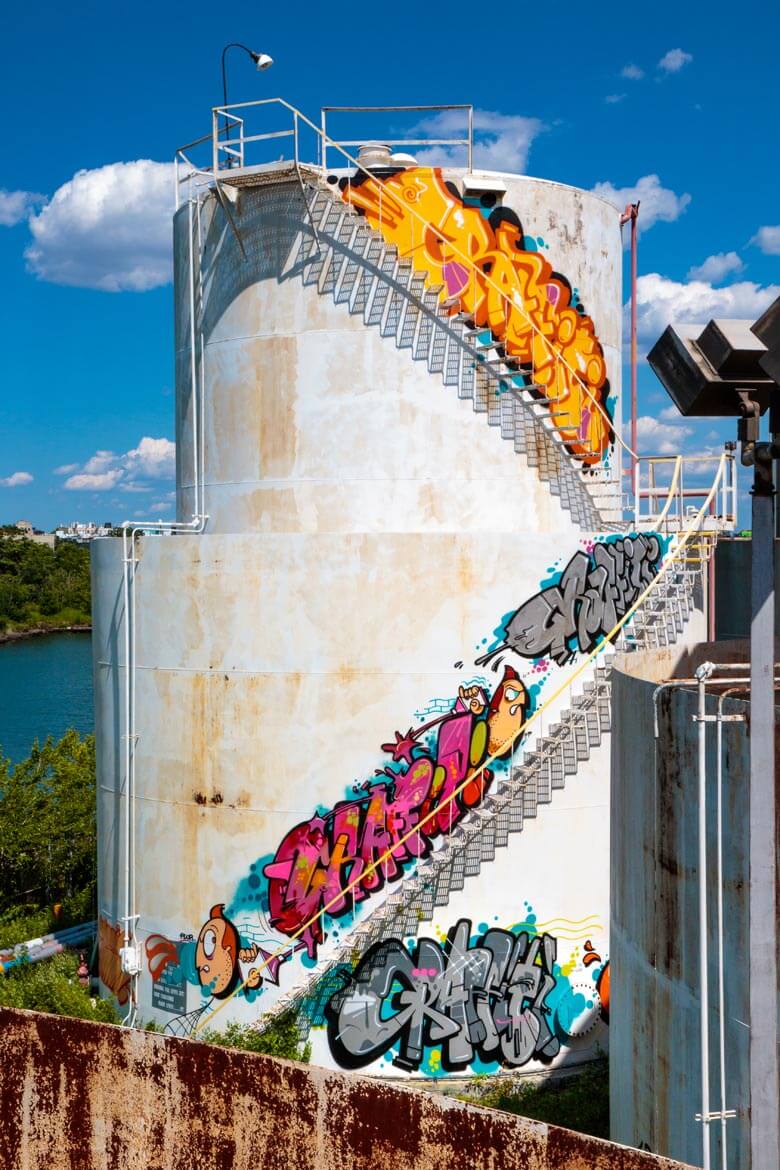 In previous experiences with DMT I was told something drastically was going to change in my life and I needed to go through it in order for me to go further with any of these sort of things. I ended up finding out who my father is through a DNA website four years after doing the test. Meeting my father helped to get rid of unresolved issues, and also helped to answer some questions about who I am and how much abandonment was a major player in the motivation to do graffiti. I ended up letting a bunch of stuff go. I learned a lot doing DMT and felt it prepared me to be able to do ayahuasca. I first tried ayahuasca earlier this year in Upstate New York with a traveling Shaman and his wife from Peru and just recently here in France, just outside of Paris. In France we conduct- ed the ceremony on a lovely compound on a hillside overlooking the River Seine. Yeah the experience is something else. I highly recommend experiencing it at one point in your life. Ayahuasca is a scary, loving and sobering medicine. It is a way to reconnect with this planet. From it you may come to the conclusion that we are all of the same source. That we are all in and beyond this concept of “God”. 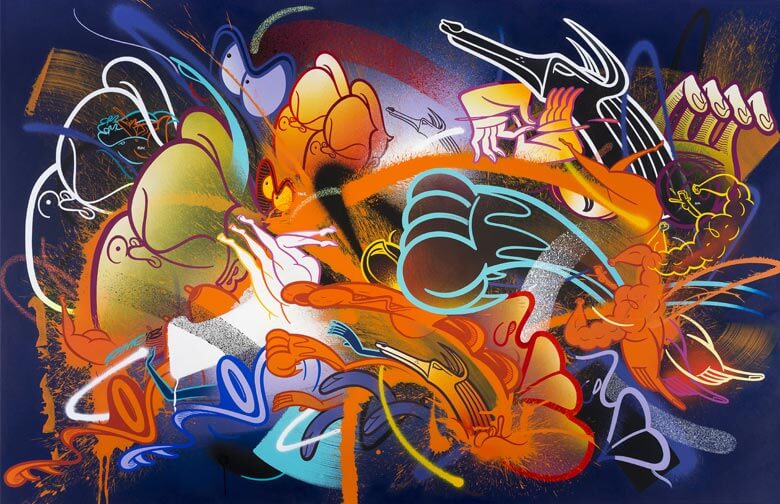 Ayahuasca, DMT, mushrooms, LSD… all of these things have had a tremendous influence on my life. On a human level, being a positive person. Shedding some behavior that was learned from a dysfunctional up- bringing. I feel like these introspective experiences have prepared me to be a better adult, artist, and a more positive contributor to this planet.

Absolutely, psychedelics have a wonderful way of resetting you. If you’re stuck in a thought or you can’t get yourself out of a mode of depression. I think that often we chalk psychedelics up as being something that teenagers indulge in or mess around with. For people in their 30s and 40s to be messing around with psychedelics, people think it’s crazy. But in fact I feel like psychedelics should be done by people 25 or older in a correct setting with preparation, respect. All that kind of stuff contributes to a profound experience. 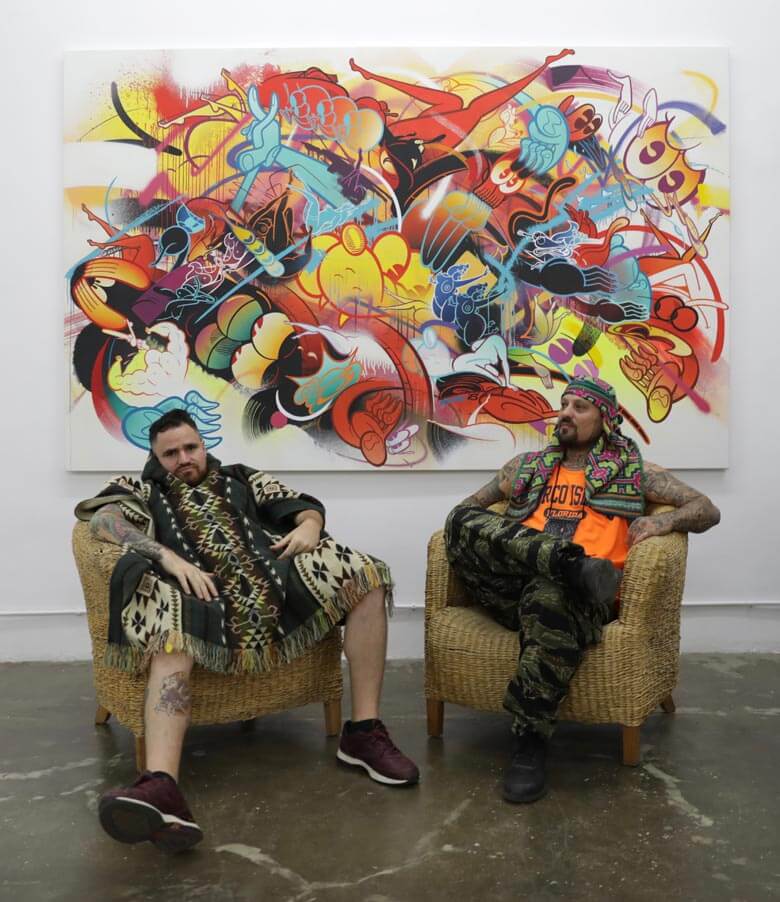