BRUTALISM IN BLACK AND WHITE; INTERVIEW WITH ELIOTE 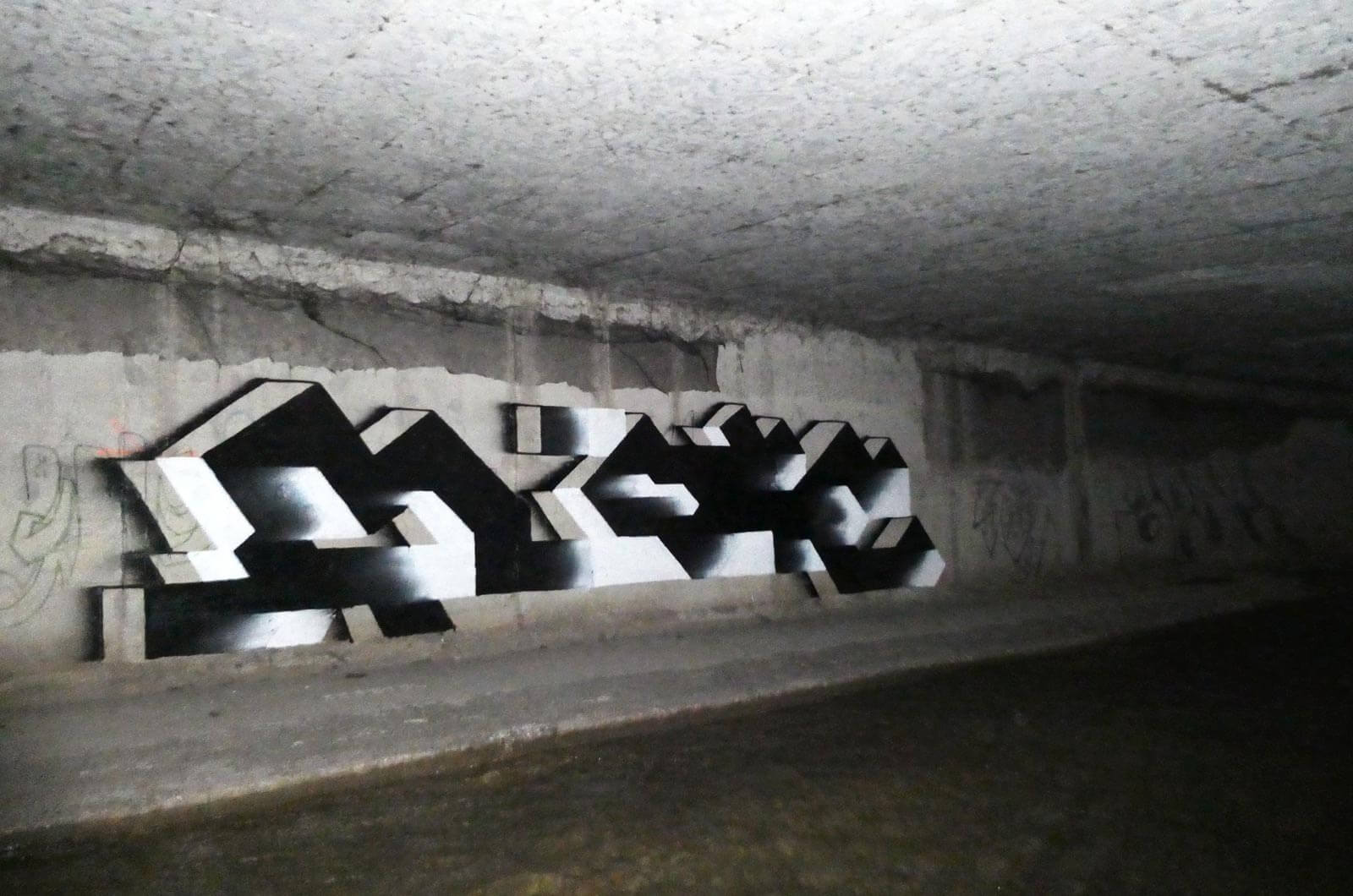 We call his enigmatic style “abstract graffiti“, a kind of movement that has been gathering traction in recent years. Going by the name of Eliote, the Dutch writer has been living in Marseille for 15 years and writing graffiti since 2003. Black, white, clean walls, and shapes that simplify the silhouette of his letters to create suggestive images with a certain artistic overtone. His simple but innovative pieces provoke many questions. We got in touch to find out what’s behind his work.

Where you are from? When did you started painting?
I’m from The Hague in The Netherlands and I’ve been living in Marseille, France for 15 years now.
I got interested in graffiti in 2001 with my good friend Kris and started painting pretty late, in 2003, when I was in my early twenties. 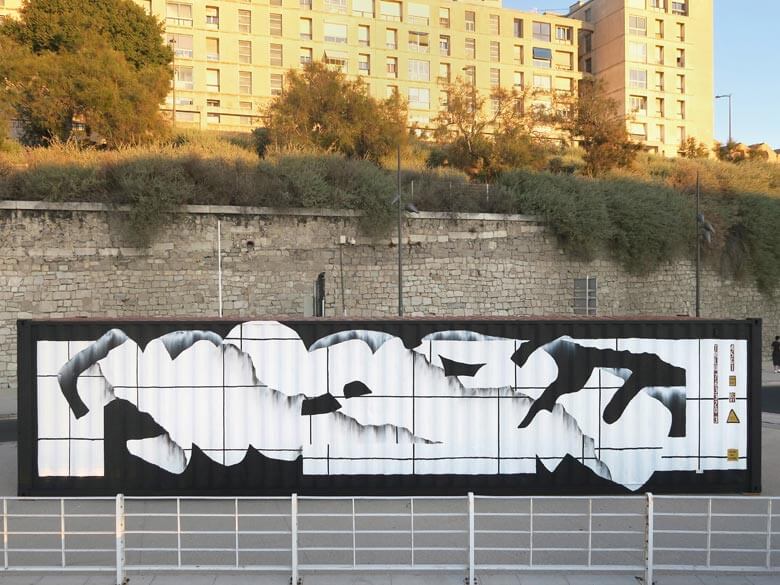 How would you define your style?
That’s a hard question because I’m not into categorizing styles too much. It’s about mixing graffiti with other graphic influences. I would say it’s just contemporary graffiti. I try as much as possible to have my own style but I haven’t found yet a clear definition for it.
For sure I don’t feel I belong to labels such as graffuturism, post graffiti or antistyle. 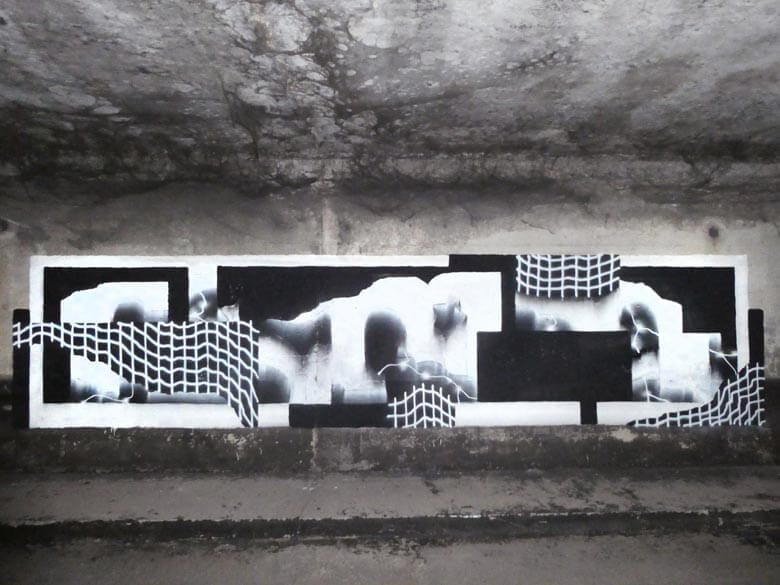 Is there any concept behind your idea of graffiti?
The concept is to come up with new ideas and shapes as much as I can, to evolve constantly and to mix classic graffiti with more abstract graphic forms and effects. I try to create a collection of shapes and styles from which I can pick up stuff and use again differently.
Some pieces can look like eerie landscapes or brutalist architecture, others like scientific data or even apocalyptic Satanic stuff. Overall I want to create a modern imaginary atmosphere in my paintings.

Tell us about other graffiti writers you find interesting.
There are a lot of writers I like, but to pick up just some:
AGAIN. His tags and pieces are always efficient and he has an impressive career in writing.
CAP CREW for the fun in the painting and the multiple good ideas.
N.O.MADSKI, he has a crazy technique in his paintings and he finds super nice virgin spots.
CERES for the countryside exploration and very nice pics.
GUN for the massive non-stop throw-ups and his instagram stories.
EGS, quantity, variety and originality of the pieces.
ISHEM and HAMS, my most regular graffiti partners for years, who are also great painters.
But again there are a lot of writers I like and if I answer this question in 5 minutes I’ll probably pick 10 others 😉 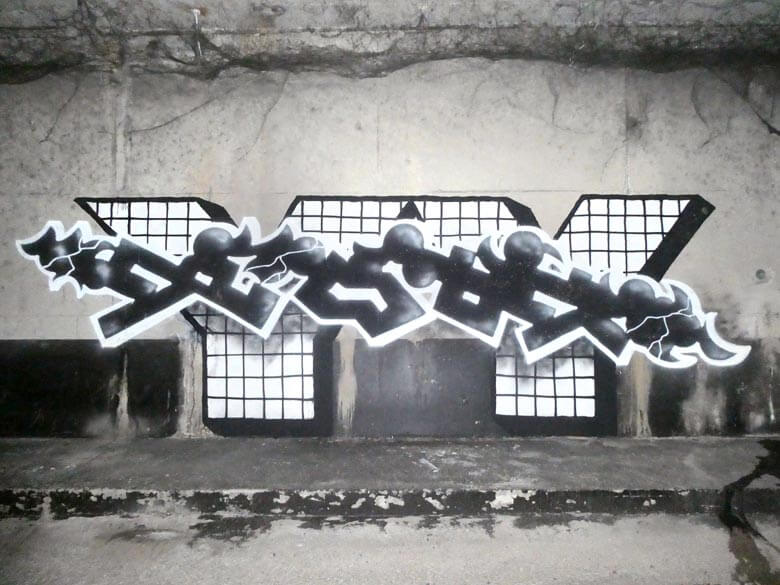 Why do you reject the use of colors?
It’s because I want to keep it as simple as possible. The aim is to have a direct readability of the piece in itself.
By omitting colors, the evolution is mainly made by transformation of shapes and effects. I try to play with abstraction, and at the same time doing classic pieces. The use of black and white is the element that links all of these paintings, it connects them as a whole although some pieces are very different from each other.
It permits me to experiment with different styles without losing my way of painting.

How important do you think it is to preserve a certain readability of the letters?
For years it used to be essential for me to preserve a readability of the letters. But now it’s been about four years since I’ve let go of the pressure and it feels much better!  I still try to keep the letter forms as much as possible but if they fade away it’s not that much of a problem.
The most important thing is the balance of the whole piece. 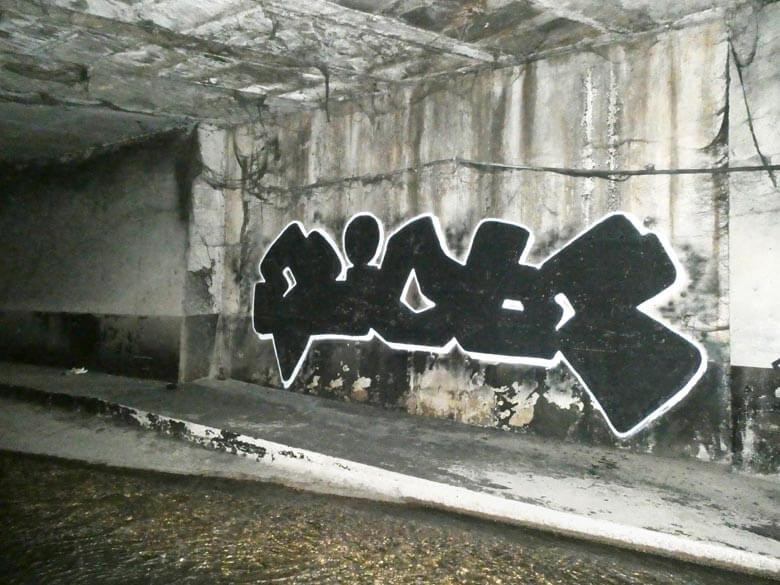 What do you try to experiment with your compositions? How important is the viewer in your results?
I try to have an overall feeling that connects all the pieces together, a cinematographic atmosphere. Some strange parallel universe.
Only a few people will see most of my paintings because they’re really in hidden spots. Today with social media, etc, you can show your stuff so easily but I kind of like to know that if you want to see them for real you have to search for them.
But sometimes I like to get up again then I’ll just do classic throw-ups in the city center. 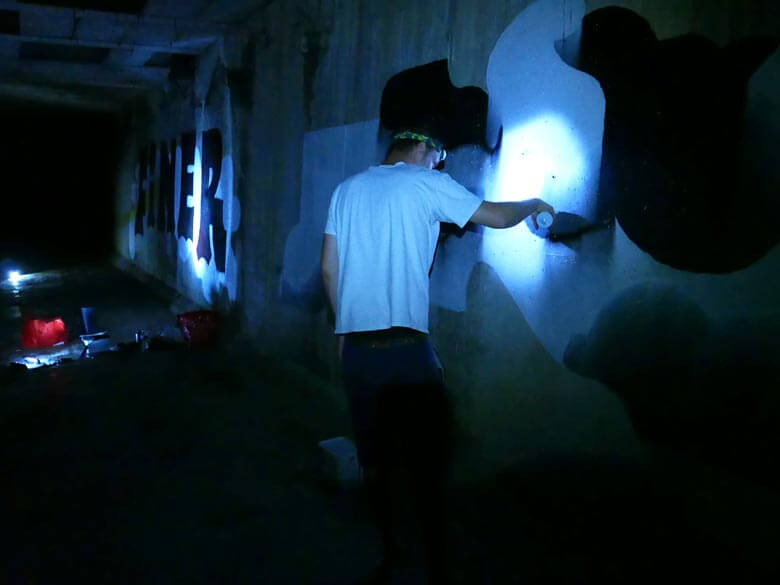 Where do the ideas for your pieces come from?
I like to think that my ideas come from what I see with my eyes. Natural landscapes of mountains and caves I discovered during trips and architectural shapes of buildings in industrial areas.
But a lot of ideas come from accidents too. I sketch on photoshop and often I suddenly twist shapes and effects. Sometimes the result is a surprisingly balanced piece. 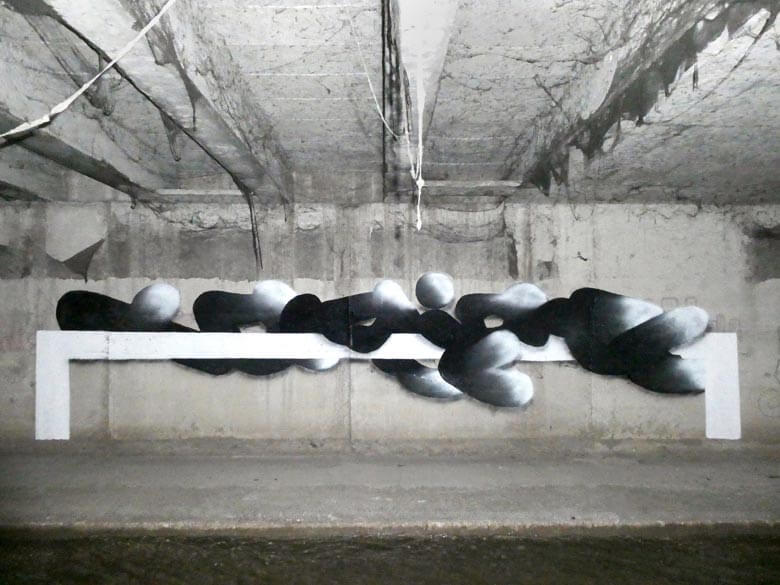 What role does Instagram play in your work?
It had much influence on my work in the beginning when I started on Instagram. I had never put any paintings on the internet before that, so I wanted it to be nicely done. When I started my account I had a huge playground of virgin walls to paint and I insisted on putting only frontal pictures of pieces. This in a way contributed to have a certain standard size for the pieces and it pushed me to have a consistency in the way I paint. Today I’m less rigid with the rhythm of Instagram.
It’s gratifying to have instant feedback on the paintings posted, and thanks to this visibility I was invited to several exhibitions and did some nice projects, which is pretty cool. 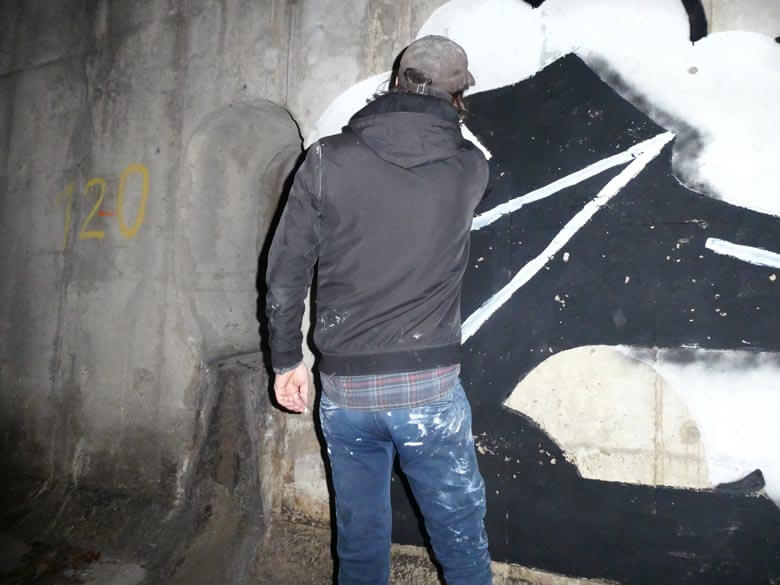 What would be the point of your graffiti on non-virgin walls?
I could paint on non-virgin walls, it’s just that I don’t like that as much. I never make backgrounds and I prefer to have the texture of the wall behind my piece and not some plain grey surface. The surroundings of a painting contribute a lot to creating a certain atmosphere. And it’s the pleasure of being the first to paint at that particular location and to have the good picture. A virgin wall makes also a painting more ‘graffiti’ like. 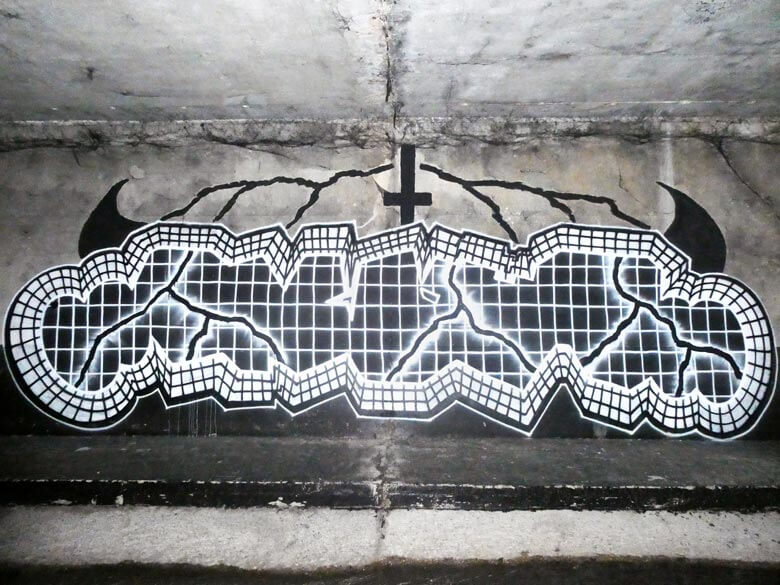 Do you have a hard time finding them?
Not at all, Marseille is the best place I know for painting the way I do. You can find virgin walls at a lot of places and not that many writers are looking for them. Although it used to be even better 10 years ago, the city is in constant evolution and some neighborhoods are still filled with wastelands.
I used to look around for new spots all the time, but during the last few years, I have been painting almost exclusively at one spot because I have less free time, which is an endless underground virgin wall.

The weirdest place your graffiti has taken you?
It has brought me to a lot of places, abandoned factories, swimming pools, tunnels, rail tracks, highways etc but most graffiti writers are familiar with those. I could say the weirdest place is where I paint all the time because it’s just so big and although part of the city, it’s a totally remote area. Nobody ever goes there. The sewers of the city, hehe. 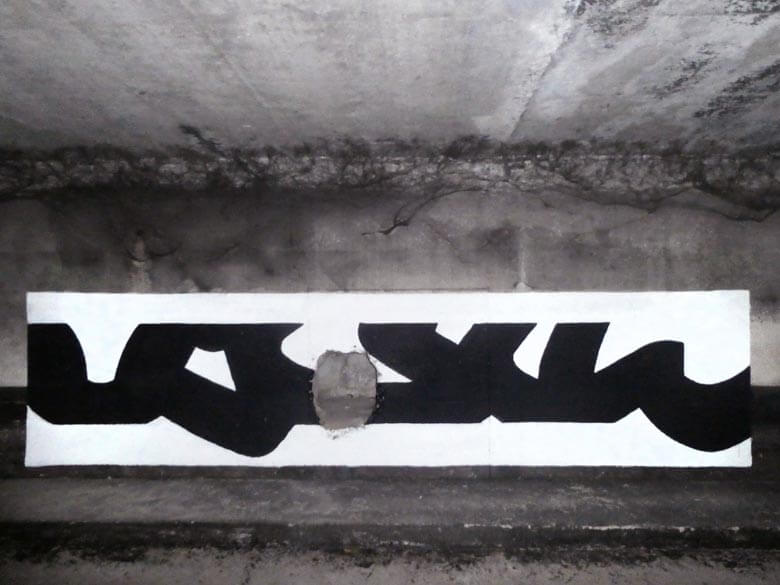