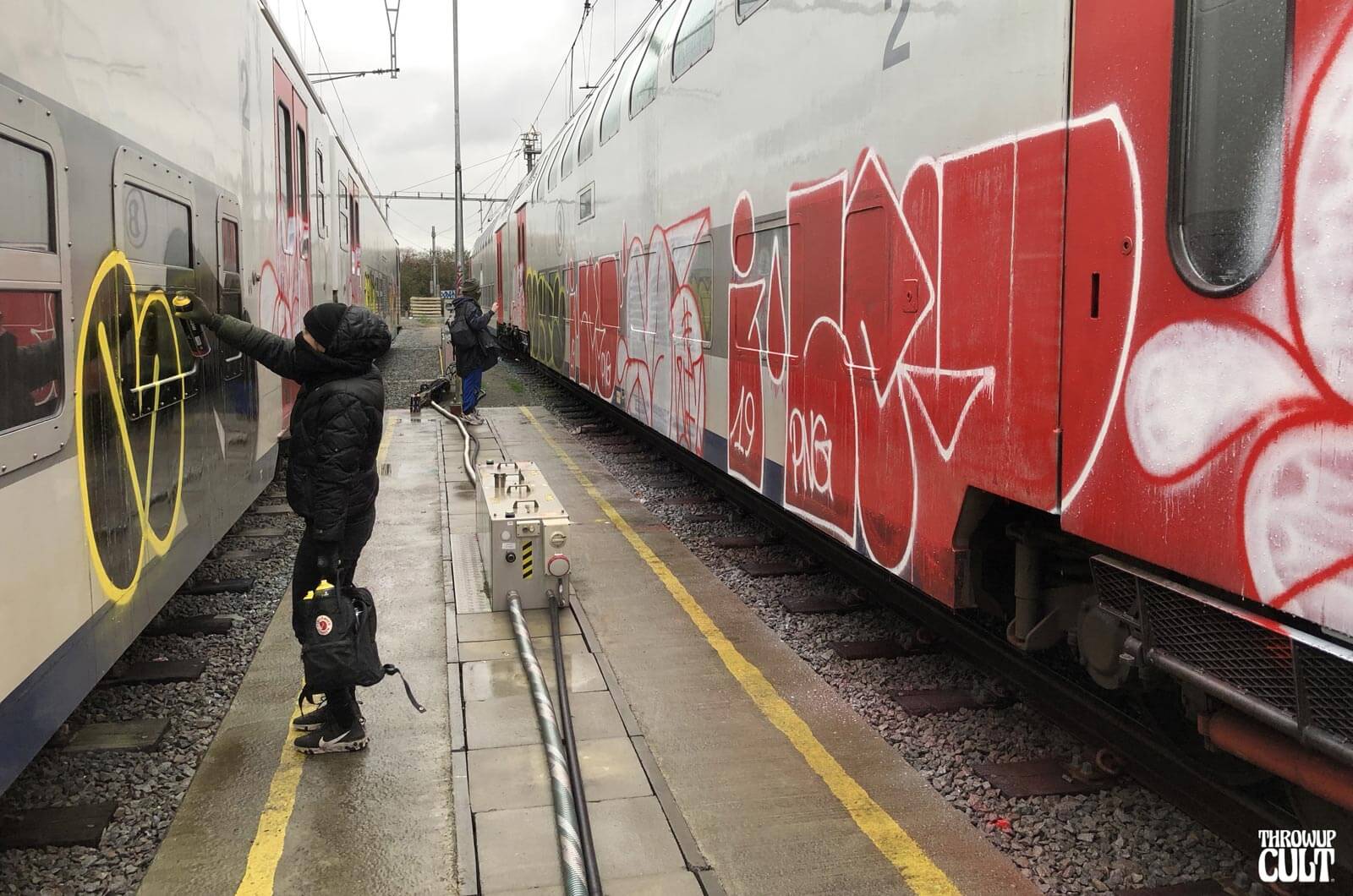 It is probably the underground graffiti account that’s provoked the most discussion in recent months. We’re talking about the THROWUP CULT, dedicated exclusively to throw-ups, publishing exclusive content by the collaborators who are considered members. If you too want to join this selective cult, or simply want to understand the appeal of the humble bubble letter format, read on.

Can you reveal who is behind Throwup Cult?
There’s no secrets. Gues and Keno are the originators of the cult.

“By observing a throw-up, we can detect the character, mood and emotion of its author, in an approach freed from the paraphernalia of the complicated masterpiece.“

How would you describe the Instagram account?
There’s only exclusive content on our account: video, photos and sketches produced by the artist we invite. In the stories, we share little gems, classics and our favorites. With kindness, honesty and a sense of humor, we try to show what is happening all over the planet, in as many places as possible, avoiding bias. The account is intended to be representative of what is happening, leaving aside the inevitable battles of egos. We are not trying to offend anyone, what motivates us is curiosity and the desire to share. 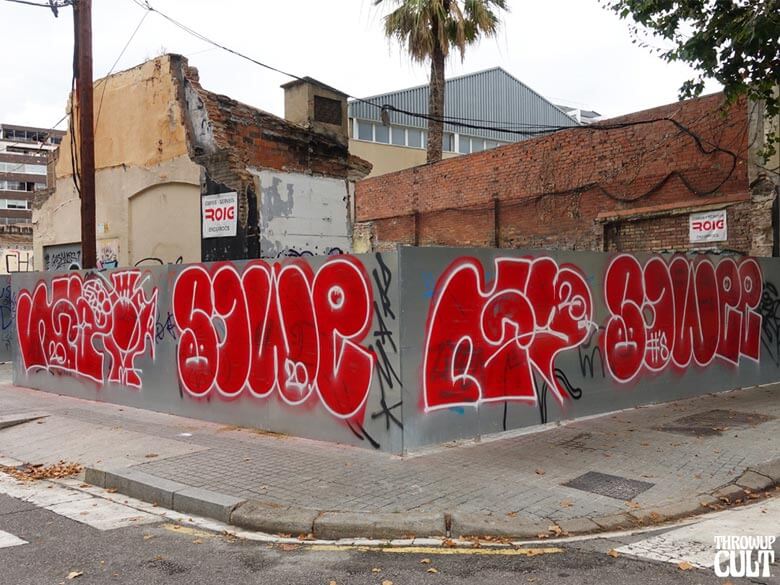 Why just throw-ups?
In short: speed of execution and visual efficiency. For the intellectuals: it is a form of conquest of the urban space specific to the world of graffiti. There’s also the instinctive side of the throw-up. For us, that’s the most enjoyable and coolest thing we can do. It is an extension of each person’s personality. By observing a throw-up, we can detect the character, mood and emotion of its author, in an approach freed from the paraphernalia of the complicated masterpiece. It’s a simple action that requires a lot of practice and little means to be as expressive as possible. Like a sketch or a newspaper cartoon, it has to make an impact. Through the videos, we can appreciate this process as a timed gesture: it becomes a choreography, a dance on the razor’s edge. When the perfection of the line is reached in a limited time, the gesture becomes instinctive. You have to be quick, and above all, avoid retouching: the initial line is usually the final outline. What we also like is this completely obsessive aspect of making it perfect, or finding a combination that makes a difference.

“We’re leaving the era of wildstyle graffiti, ultra polished with many details and the diktat of so-called “good taste” on the wall, not to mention street art.”

Do you think throw-ups are underrepresented compared to to other forms of graffiti online?
Throw-ups do not suffer discrimination on the Internet. All aspects of graffiti are widely represented. Many writers love throw ups, it is a practice that has earned respect in recent years. We’re leaving the era of wildstyle graffiti, ultra polished with many details and the diktat of so-called “good taste” on the wall, not to mention street art. Graffiti on trains and subways with their sporting feats worthy of the X- Games shot with a drone has temporarily overshadowed one of the most amusing aspects of graffiti: the pleasure of writing your name everywhere in style, no matter the medium, size or tools.

“A throw-up should never have touch-ups and shouldn’t have more than two colors: one for the fill, one for the outline.“

What makes a throw-up attractive?
Simple ideas, fluidity and elegance of the gesture. No need to fill your bag with cans and prepare a detailed sketch to do a wall in a wasteland or watch a train station for hours. A few cans and a few caps are enough to have fun. 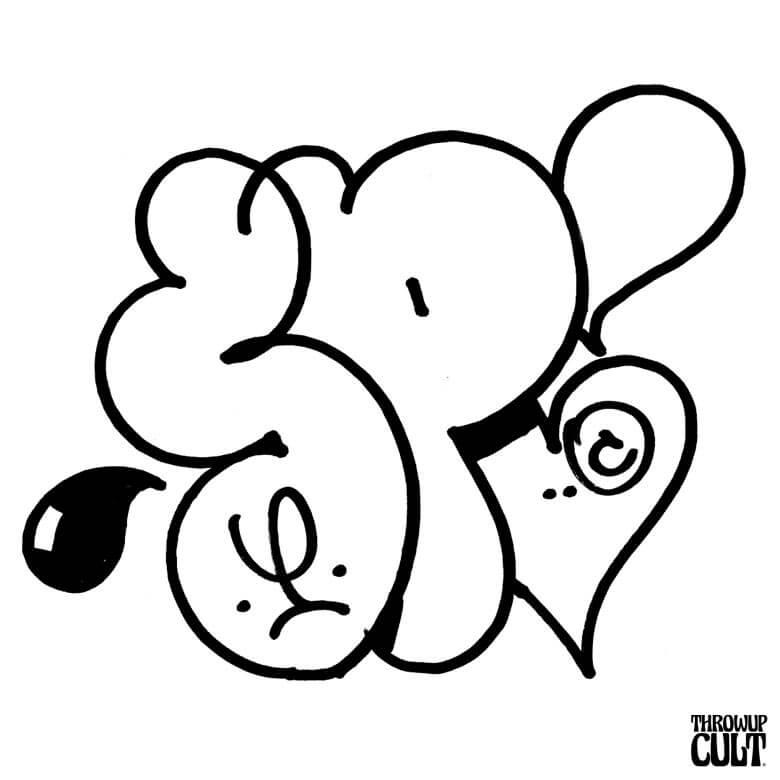 What should a throw-up never have?
A throw-up should never have touch-ups and shouldn’t have more than two colors: one for the fill, one for the outline. But we are not very fond of rules of conduct or a strict code to follow. Everyone can find their own way to make a difference, and that’s what matters.

You can’t avoid the question: Who are the three best throw-up writers according to Throwup Cult?
Athos, Porthos and Aramis … without forgetting d’Artagnan as reinforcement.

“To judge, we would have to consider ourselves above others, or better than them. You cannot be a judge and participant!”

The best throw-up writer?
We don’t want to put ourselves in the shoes of a jury, to give good and bad marks. There are no prizes to win. Obviously we have our personal tastes, we discuss it together, sometimes we disagree, but we agree not to make a classification on our Instagram account. We try to show the plurality of a practice that we love. Imposing our vision, while we are also participants, would be an aberration with respect to this free conception of graffiti that we want to share. To judge, we would have to consider ourselves above others, or better than them. You cannot be a judge and participant!

Do you think throw-ups follow a geographic pattern?
Since the advent of the Internet, inspirations are global. Different forms of graffiti circulate and that’s not bad. It’s nothing new: before the internet, fanzines had an important role in the diffusion of styles. Obviously, we do not question at all the New York origin of the throw-up, but now everything has become hybrid, it’s mixed. What matters to us, more than establishing a geographical differentiation, is connecting with the energy and spontaneity of the origins, without falling into nostalgia for a fantasized golden age. 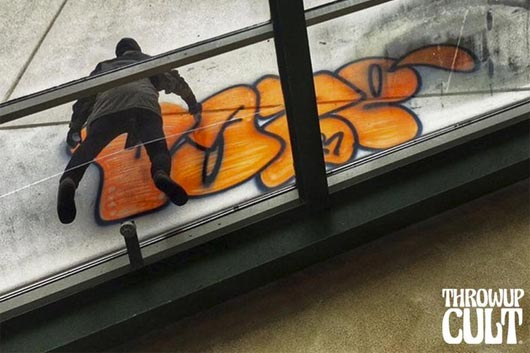 Throw-ups are a traditional part of graffiti. Instagram no. Is this dichotomy between the new and the old consistent?
What a beautiful new word! Didn’t you know where to put it in the interview?
For those who, like us, do not understand this term, here is one of the definitions we found: “a division or contrast between two things that are or are represented as being opposed or entirely different.” We could also talk about Zeno’s paradox, but it’s quite complicated to put in relation to throw-ups.

“The bitterness of the old men who no longer do anything or the haughty tone of the pseudo-purists… LOL no, we are not interested … And no, it was not better before.”

Graffiti magazines lost influence with the emergence of blogs, and Instagram has buried them even deeper. What do you think about this phenomenon?
We are avoiding judging, we don’t want to end up being a curmudgeon like the old guys from the Muppet Show. The world is changing, it is in motion and we belong to our time. The bitterness of the old men who no longer do anything or the haughty tone of the pseudo-purists… LOL no, we are not interested … And no, it was not better before.

Does Throwup Cult have plans to release anything ‘physical’ in addition to wallpapers?
The wallpapers are just a little taster. We have many ideas in store, we have many ongoing projects, quality made in Europe, collaborations … As a label, we do not set limits. We worship throw-ups as a simple and effective practice. We spread the good word by gathering as many followers as possible who share our values. The time for conversion has come, join us! 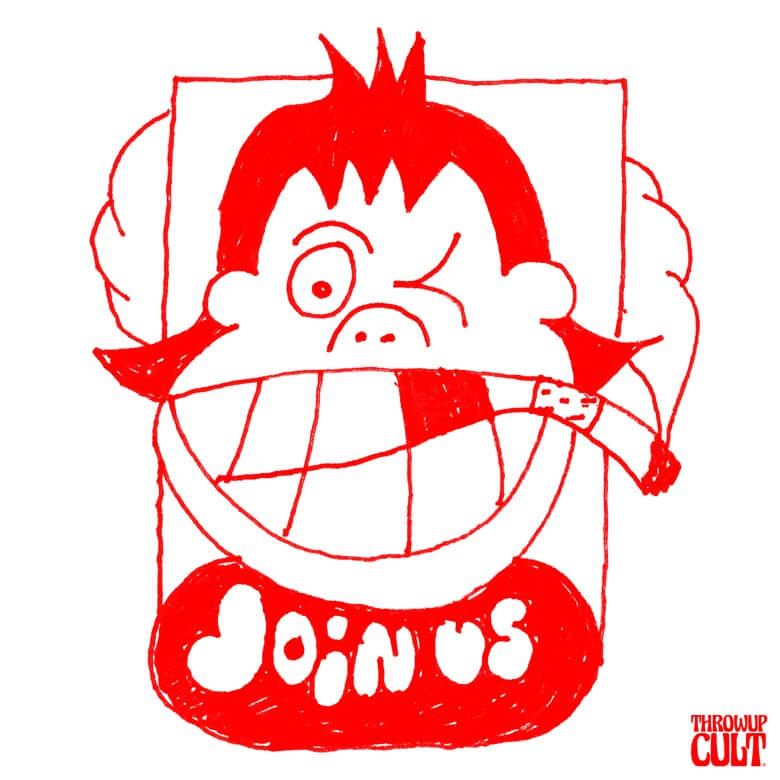