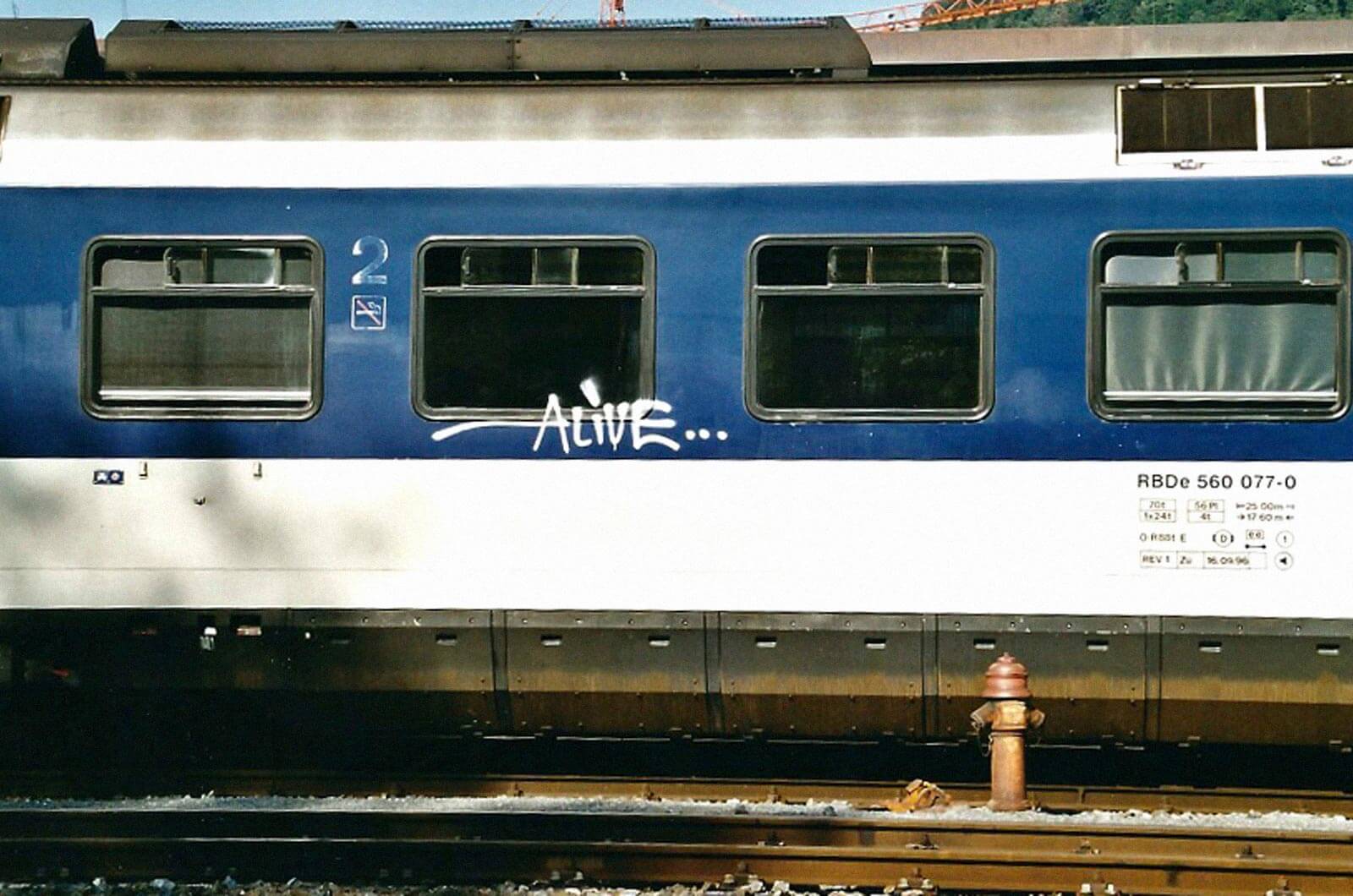 The Bern resident Alive – not to be confused with his namesake from The Basque Country – has just released a book about his career as a train writer, “Still Alive, Still Alive, Wearing Sunglasses at Night”. A Swiss pioneer of anti-style on steel, he represents the evolution of graffiti in Bern during the early 2000s. Before checking his new publication, we wanted to chat to him about the golden age of irreverent Swiss graffiti and the role it played in Europe.

For those who don’t know you, how would you present your profile?
I’m a writer born in the Swiss Alps where the chance to make a career in graffiti is slim to none compared to European graffiti capitals. Maybe due to this bad launching position, I had to develop more effort and ambition for the game, but some fortunate factors led him to the point where I could express his feelings towards graffiti well. Later on when I moved to Bern, the city gave me an optimal platform to perform. However the experience of being an outcast made me more innovative than others who were playing the same game. In addition, I did not follow the rules set by my predecessors. Of course the fact that I have traveled a lot has broadened my horizons regarding styles and views about graffiti. 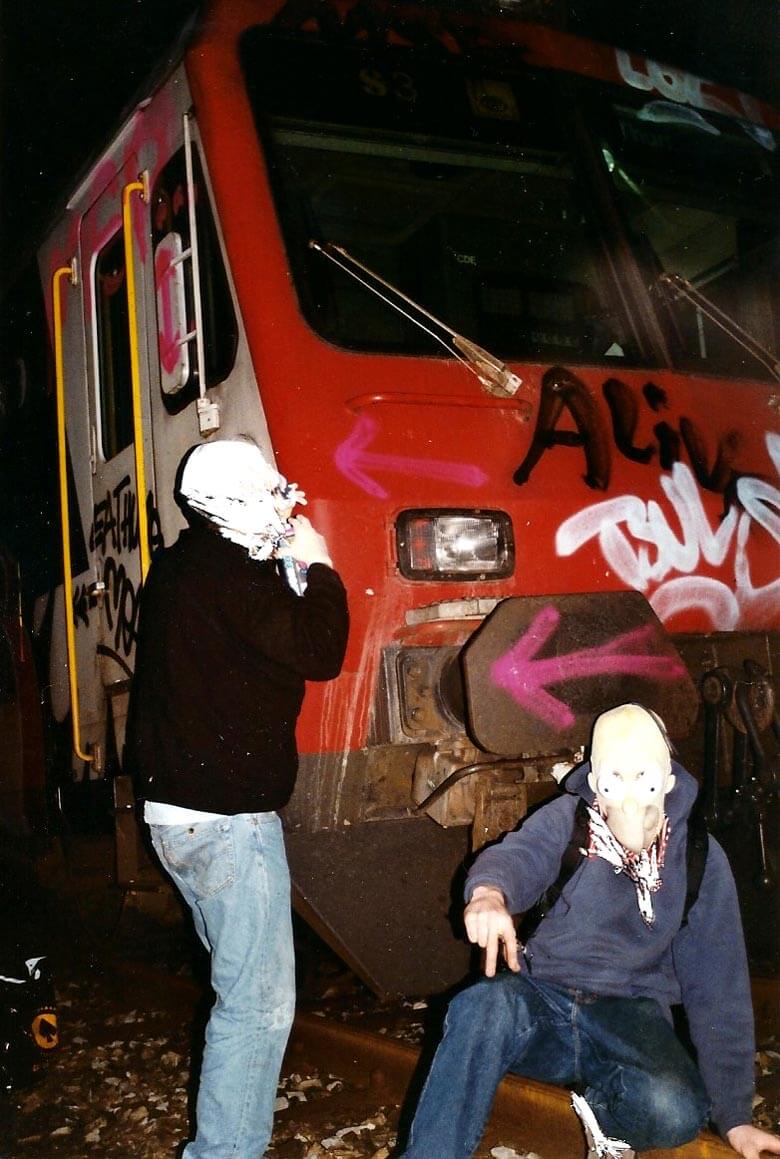 How many aka’s have you had?
Many – I’ve never counted them, but in the book most of them are listed. It made sense in my mind to create different names.

Why?
I like painting different names and I don’t care about the fame one name can give you. Besides, not painting the same name over and over again is good for safety. But the main reason why I paint different names is ‘cause I like to try different letters and styles.

Explain a little about how Punks On Steel was created, and tell us about the period when the crew was ruling the trains in Bern.
POS – Punks On Steel – was created by four guys who thought that the writing on trains should catch more attention. We were all in different crews for street and train line bombing and legal graffiti, but then we connected with an intention to take steel more seriously. Later we became the most active crew painting trains in Bern and started to welcome others into our circle that had the same intentions as POS.
We evolved into a big crew and many things happened on our outings in Bern, with tourists and other locals as well.

Any anecdotes?
Yeah, here’s one: I always used to look for new places to paint and most of the places east of Europe already had a very active scene. We had connections in Prague, Bratislava, and Budapest, but in Romania we hadn’t heard or seen anything yet. On the Internet I stumbled across a comment where someone from Bucharest was looking for Montana paint. He wrote that you cannot buy Montana in Romania and as a result he would pay for them. I had already planned a trip to Vienna and then decided to bring a few cans to Bucharest for him. At the train station we immediately recognized each other, writers recognize writers. He was very happy with the gift from the West and in return he let me stay at his home with his mom and also took me to the subway yards. 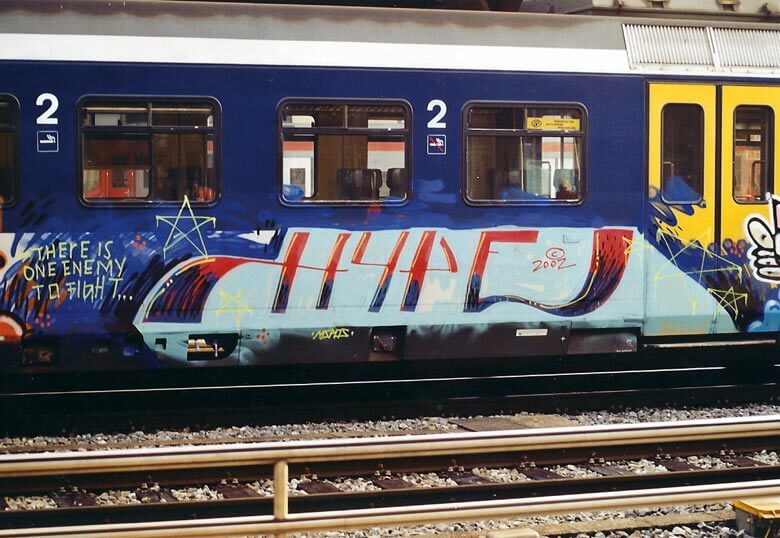 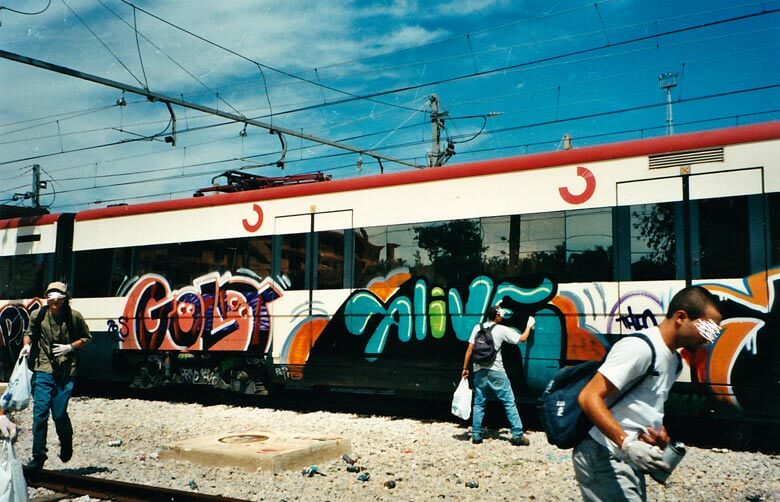 What role has Bern played in Swiss graffiti and, by extension, European graffiti?
Because of what POS did in Bern, the city became very active with a lot of new, skilled, and motivated writers. There were people bombing the streets and train lines, and more steel has been painted than all the other cities in Switzerland. Bern made noise, first in Switzerland and then later also in Europe. The scene has rapidly grown and a nice dynamic has taken over the city. People are motivating each other.

“It was the same core group of people behind the magazine and in the store, all working with pure passion for graffiti instead of money or short-lived fame.”

What role has the NonStop magazine and the Layup store played in all of this?
Nonstop Magazine was the main trigger for the scene in Bern. Everybody wanted to be featured in the magazine. Because of smart management, the magazine was also sold all over Europe and even worldwide since Tower Records, an international music store, used to sell them from New York City to Tel Aviv and then back to Japan. Writers could buy the magazine from Bern in every corner of the world. And Layup was our local shop to get the gear – we were equipped with top material. It was the same core group of people behind the magazine and in the store, all working with pure passion for graffiti instead of money or short-lived fame. 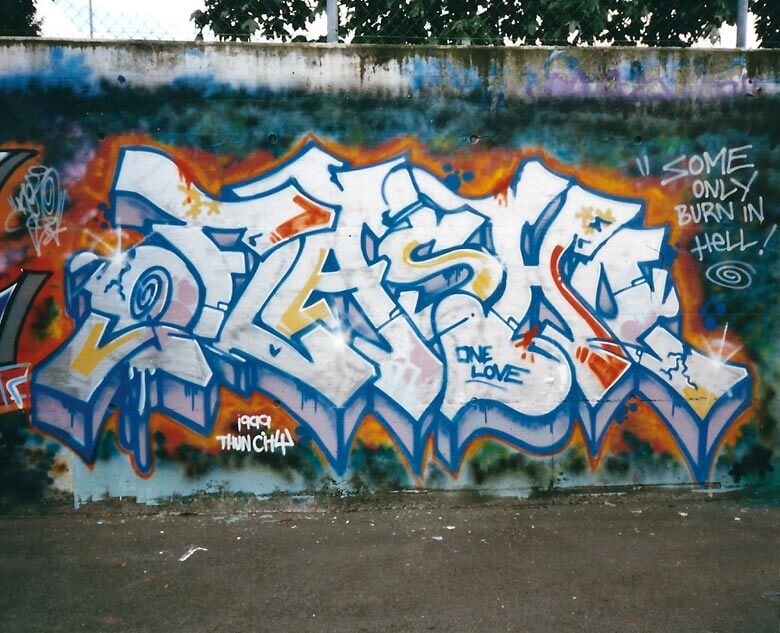 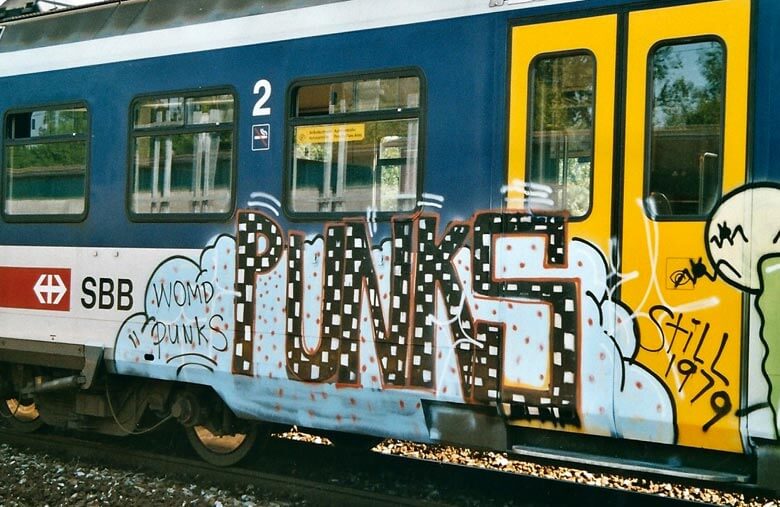 Alive has always manifested itself in a very controversial style…. Where does it come from?
I was writing very conventionally at first, especially in the late 90’s; classic wild style with b-boy characters influenced by New Yorkers like Seen, Shame or Duster. Later somehow I felt I had already seen it and done it. This was also the time we started POS. For me steel is very different to paint than walls. On walls you create burners in four hours, but on steel you burn in 10 minutes. I was thinking very minimally and thought about what only really matters on the train. I had seen many bad panels, graffiti that nobody could read, and 20 colors playing in the yard for two hours. This was not my style.

Of course I also had good panels to learn from; SDK, VIMOA, THE, or TSK for example. I never wanted to copy that style so I had to be innovative. At the time my style also got a dirty trash style, a little more than that punk attitude. People who knew me for my legal classic style at first couldn’t understand why I painted these simple, fast, and dirty things, especially when I took that style back from the 10 minute panels to the walls.

Is there a message behind this style?
At that time I did not like clean panels. Clean panels were for me the style of the superior, the style of the oppressor, the guy that wants to tell you what graffiti has to look like. Since I had my outcast background I didn’t gave a fuck about this dogma. Too many had less talent but more credibility just because they grew up in the better place. Maybe my style, or this style, was the voice of the underdog. 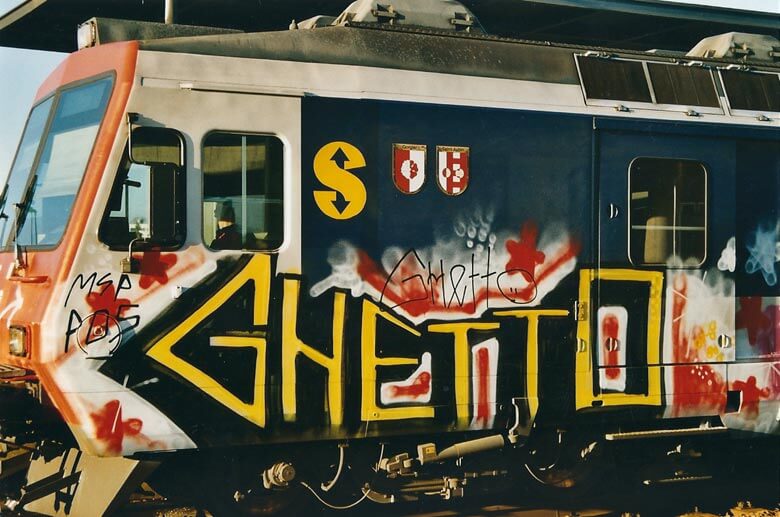 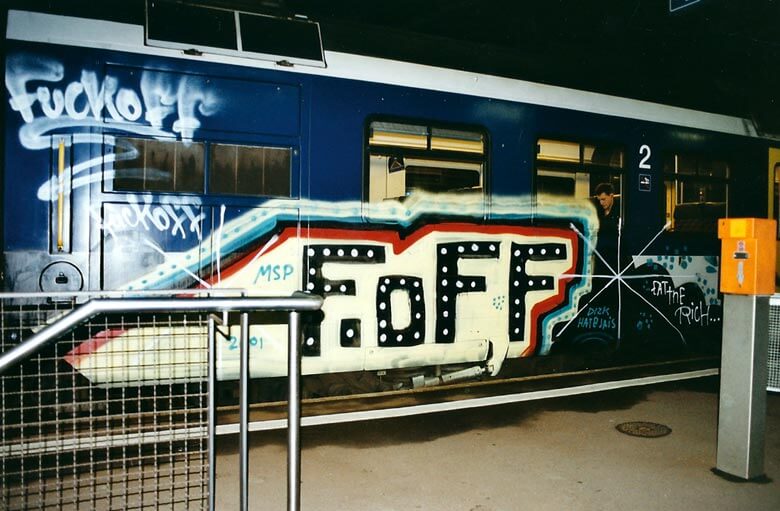 How was that style perceived in the early 2000’s by the graffiti community?
Bad, it was called anti-style. Many hated it, but you see what happened. Time has told the story.

“I took the steps and thought a book was a good way to distribute it and let them know that I’m still alive.”

Why make a book just now?
I took a break from graffitti in 2006 and left Bern to live in Africa. When I came back to Switzerland and started painting again people sought after my old graffitti. I took the steps and thought a book was a good way to distribute it and let them know that I’m still alive. 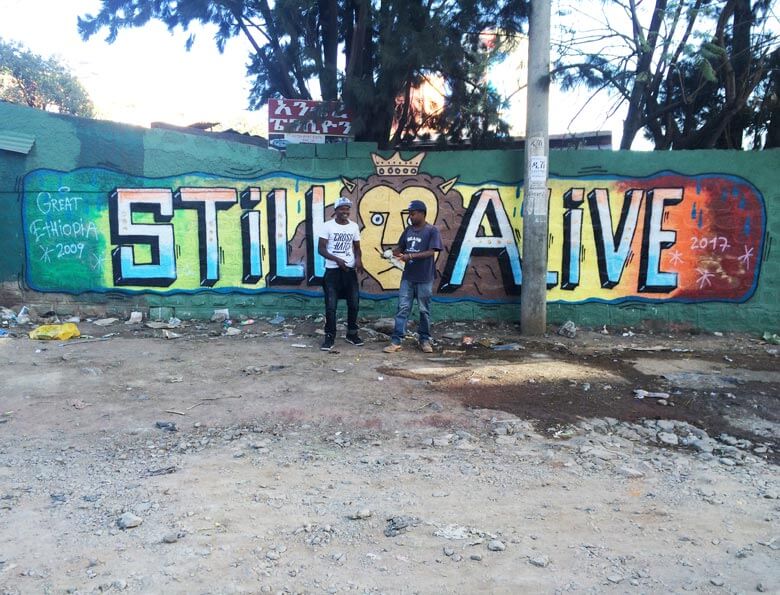 What will we find in it that we won’t find in other books about train graffiti?
The book is not about train graffiti particularly, it’s more my personal history. It shows the evolution of my style with all the trimmings. There are a lot of stories that relate to the images shown in the book. Beside trains, it’s got walls, tags, bombing and hall of fame pieces inside – a selection of everything I have painted over the years. Besides, this book is also an eye witness story of the development of graffiti in the early 2000’s. 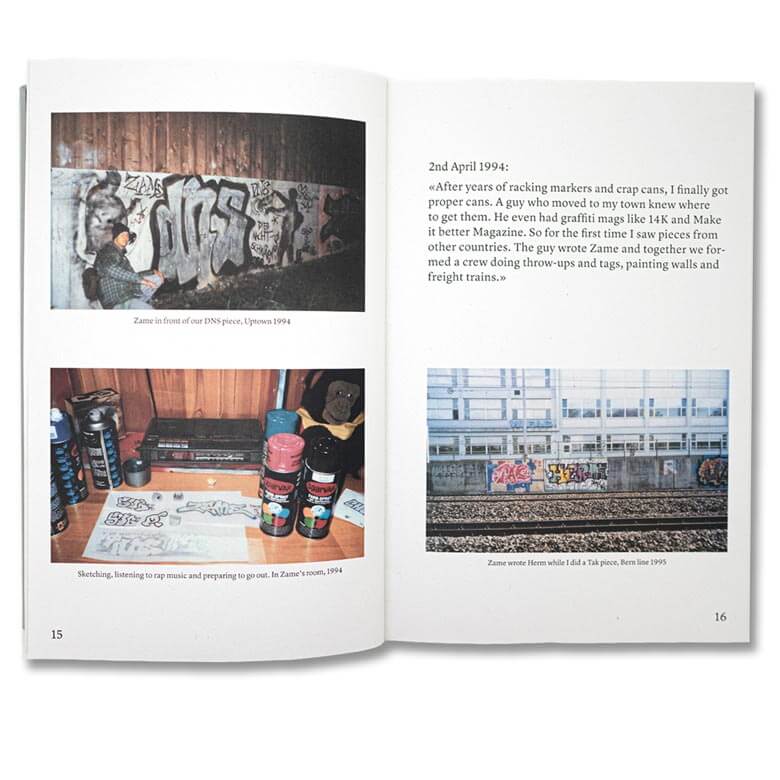 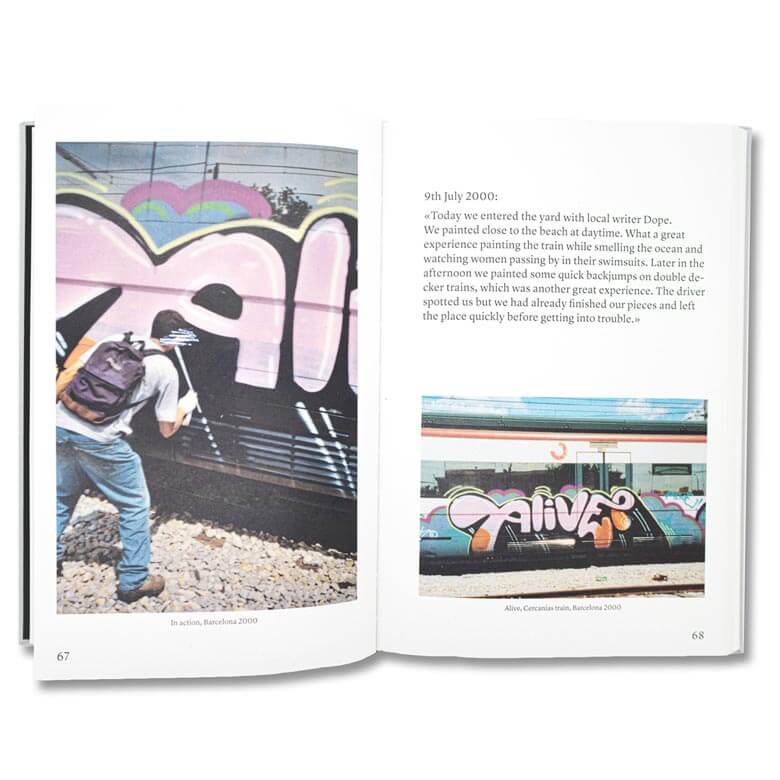