GETTING TO KNOW LITTLE MISS UNDERSTOOD 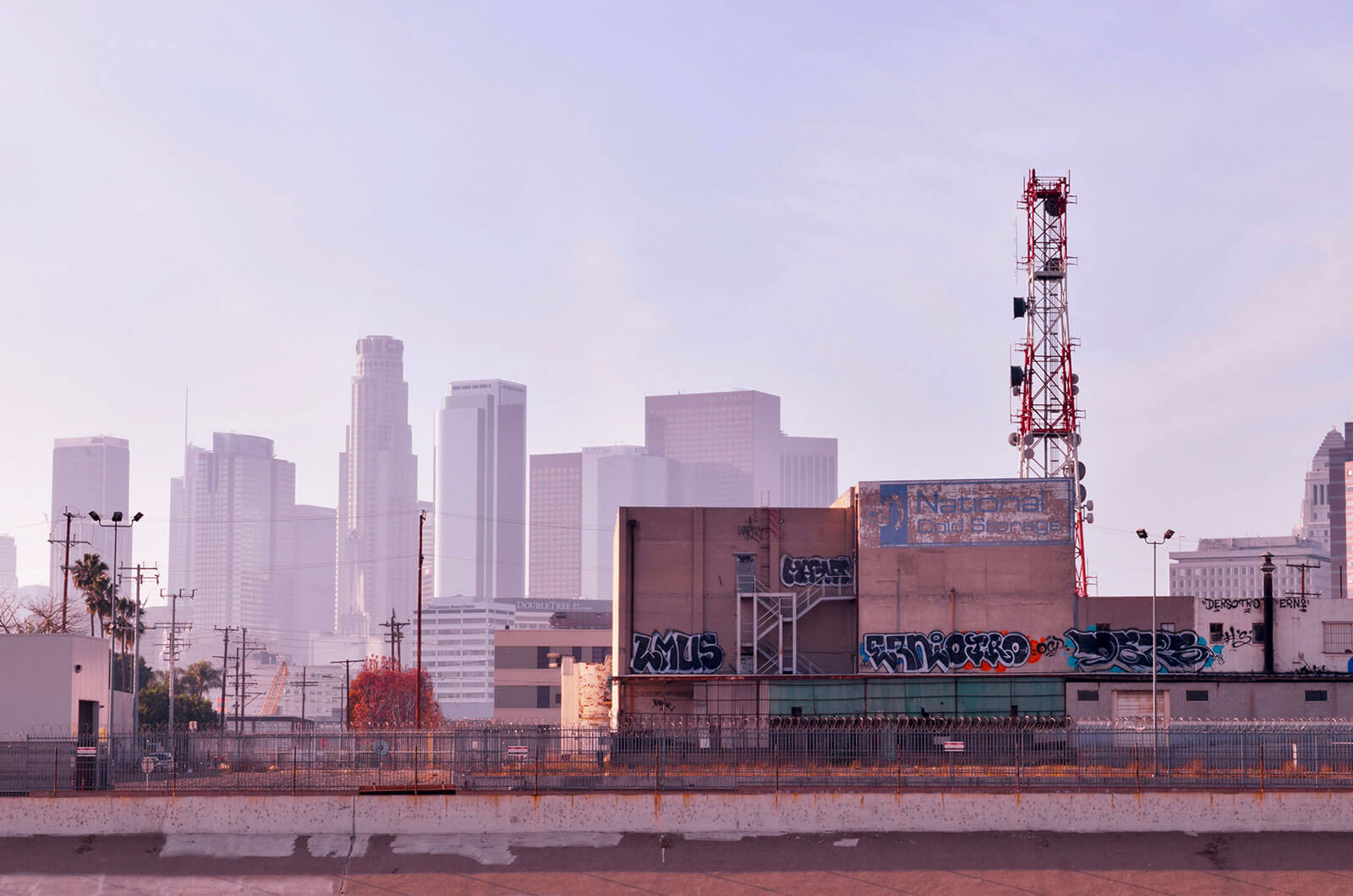 The Florida-born writer Little Miss Understood – better known by the abbreviation LMUS – is a name principally associated with bombing tags and throw-ups. Ever since she started tagging in San Diego, she and her partner in crime Erni have made their way all around the USA, leaving tight bubble letters in their wake. Publishing regular updates through her shared Instagram account Death by Letters, she represents the joy of travel, action and repetition of traditional graffiti.
As part of #mtnwomensmonth, we reached out to LMUS to talk about her experiences making her name as a female bomber in the United States.

Why do you center your graffiti activity around bombing with throw-ups and tags?
For me, there are a few reasons why I stick to bombing with throw-ups and tags. First, it’s the most exciting form of graffiti. The adrenaline rush that comes along with street bombing is why I keep painting. I do my best work when I am moving quickly and under pressure.
Second, street bombing is a way to interact with the city in a way the average person will not experience. It pushes you to step outside your boundaries and explore all parts of the city that you would not usually go to. I think any writer will agree that you really get to know a city through bombing.
Third, It’s the fastest and most efficient way to get up.

“We want to highlight graffiti artists that are working in the streets and in the gallery. The art world is so exclusive and money driven. Why can’t we change that? Graffiti writers are artists who deserve recognition.”

In the Fonesex interview you imply that graffiti is an art form. In the case of street bombing, it’s debatable, isn’t it?
Yes, it’s definitely a great debate. But, I fully believe street bombing is an art form. It requires creativity and skill.  It’s an expression of yourself and a way to communicate. In my opinion, these are all aspects that make something an art form.
I actually believe graffiti to be one of the most progressive movements in the history of art. What makes graffiti so monumental in the context of art history is that it is not confined by the boundaries of the canvas, the gallery, the gallerist, or the art market. It’s free art. Motivated by self expression, not money. It’s actually an anti-art art form. Quite Dadaist, huh?
Although it is not fully not appreciated as art, as time passes I think perspectives will change. 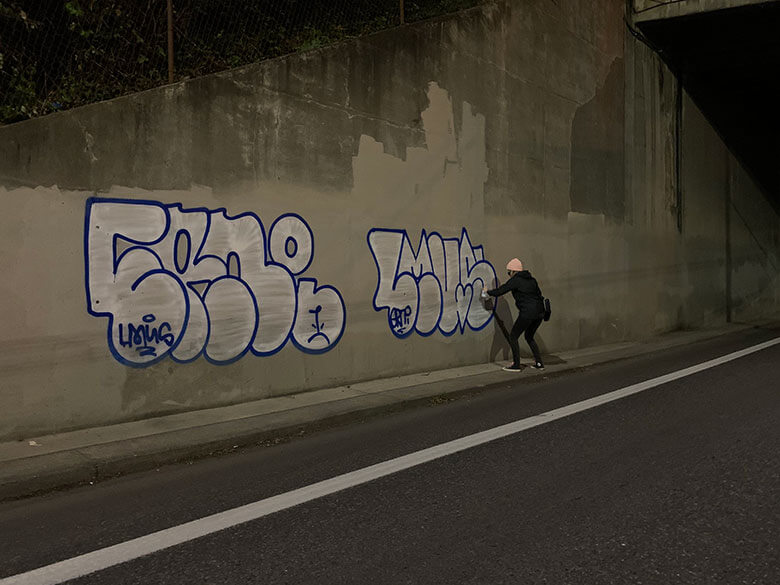 How much do you paint per month?
It changes month to month, but I try to paint AT LEAST two times a week. So, If it’s a good month, 12-15 days out of the month.

What could be the toughest consequences in the USA if you get caught by the cops painting a throw-up in the street?
This all depends what city you are painting in, what surface you are painting on, and the cop that pulls you over. Some cities consider graffiti a misdemeanor, but in other cities it’s a felony. Bigger cities are less likely to take you into jail and might just write you a written arrest. That would result in several days of community service, fines, or jail time if you are a repeat offender. The worst consequence would be getting locked up for graffiti several times and facing prison for repeat offenses.

“LMUS is an acronym that stands for Little Miss UnderStood…It allowed me to embrace the very thing that I thought was wrong with me. I never really felt connected to anything until graffiti.”

Are you in contact with the international scene?
Yes, I am in contact with many international writers through Instagram from all parts of the world. I think that is one of the greatest things about internet graffiti today. The platform allows you to connect with other artists and writers globally.

Which cities of the international scene do you rate?
Toronto, Paris, and Tokyo. 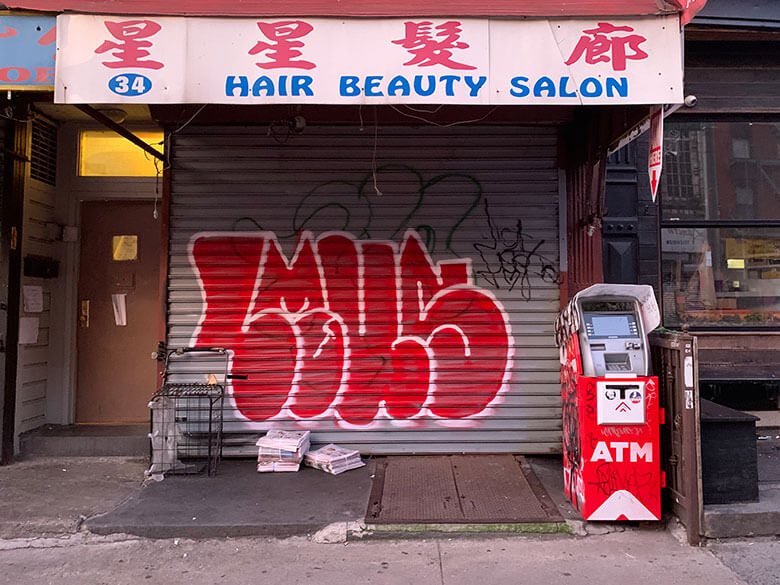 Do you think there are different styles of street bombing depending on the cities?
Yes, definitely. I think writers inspire other writers, so trends tend to happen within a city. In Los Angeles you will see lots of burners, pieces, and rollers. In New York there are throws and tags everywhere. Letter styles also vary from city to city. But now, with graffiti accessible to everyone through the internet, style inspiration can come from anywhere. 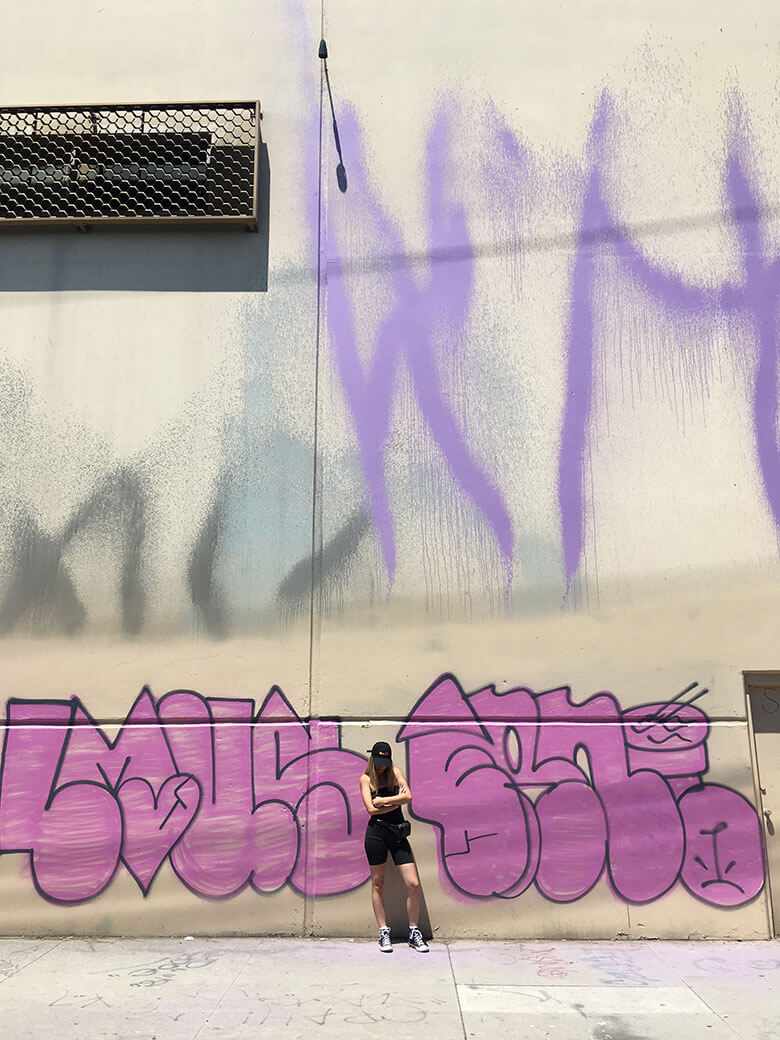 What is your opinion about Hall of Fame graffiti?
Hall of Fame is what I would consider “Legal graffiti.” It’s displaying the craft of graffiti but really isn’t graffiti itself. 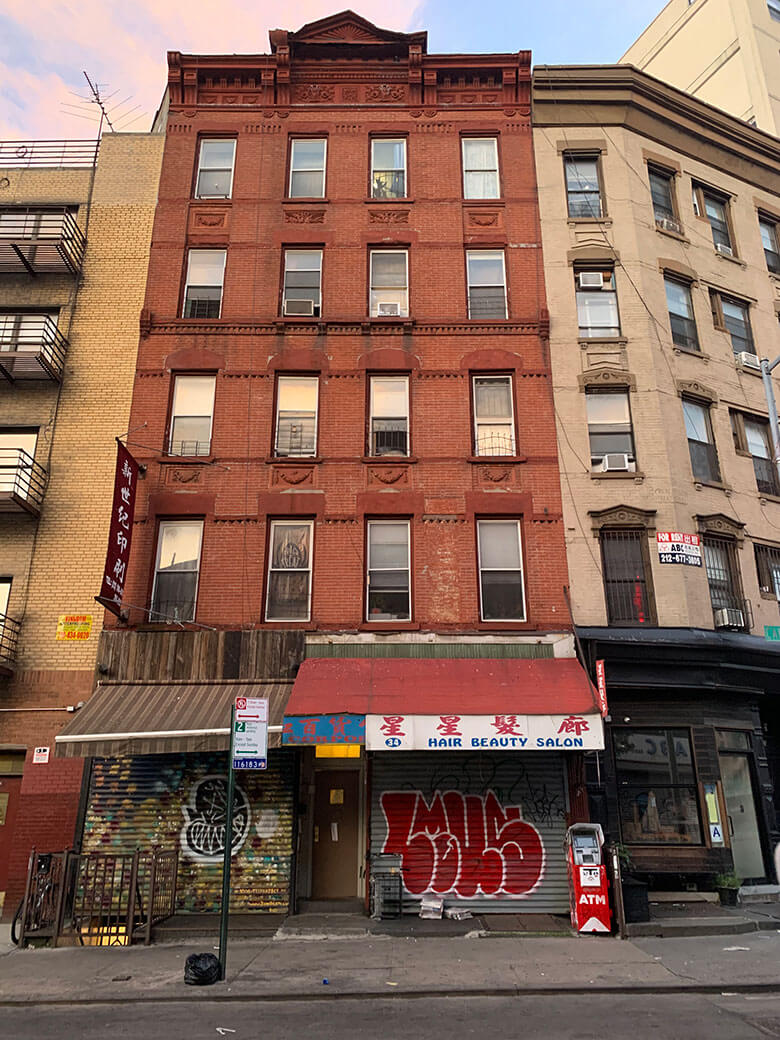 “I started to take action shots and film myself painting for evidence to prove my skills. I never wanted anyone to think my partner was painting for me.”

Is Death By Letters is a project to disseminate art made by illegal graffiti writers? What are the differences between that, street art and urban art?
Yes, that is the main goal for Death By Letters. We want to highlight graffiti artists that are working in the streets and in the gallery. The art world is so exclusive and money driven. Why can’t we change that? Graffiti writers are artists who deserve recognition.
The works we want to display will bring the elements of the graffiti into the gallery, which will allow the public to see it from a different perspective. We want people to question “is graffiti art?”
In my opinion, the main difference between graffiti and street art is the use of letters vs. everything else. That is why it is so ridiculous that illegal street art is acceptable but graffiti is not. There is a social stigma against graffiti. Street artists are viewed completely different than writers.

Do you really think there is a public for it?
Yes, I see graffiti becoming more and more popular. 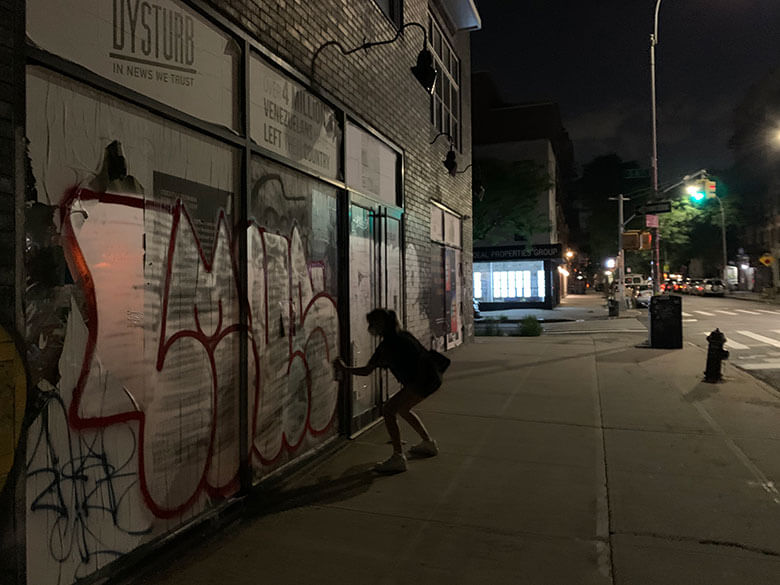 What do you think about the writers who refuse the online exhibition and commercialization of their name?
I think everyone has their own way of getting their graffiti out there, but using the internet makes it way easier. If you are refusing to use the internet to display your work, you are only limiting your audience. Being online is not the only way to get your name out there, but it’s a lot more challenging without it.
I also do not see anything wrong with the commercialization of their name as long as they put in the work and effort in the streets and earned respect to their name. But it is a big no-no to appropriate graffiti for commercialization.

Where does the name LMUS come from?
LMUS is an acronym that stands for Little Miss UnderStood.  It comes from the feeling of being misunderstood growing up. It allowed me to embrace the very thing that I thought was wrong with me. I never really felt connected to anything until graffiti.

“Female writers are too often sexualized and are underestimated as writers. I cannot tell you how many times I’ve gotten the comment “you paint so good for a girl,” as if it is so surprising for a female to be successful at graffiti.” 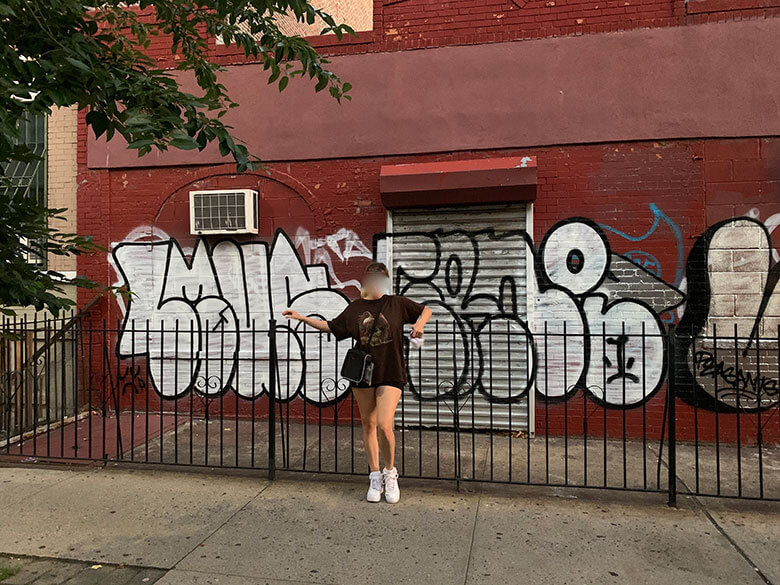 Which sexist attitudes have you experienced while painting?
Having to “prove myself” because I was a female. I would never let Erni touch any of my graffiti because I felt a huge amount of the pressure to prove myself as a female writer. I started to take action shots and film myself painting for evidence to prove my skills. I never wanted anyone to think my partner was painting for me.
Female writers are too often sexualized and are underestimated as writers. I cannot tell you how many times I’ve gotten the comment “you paint so good for a girl,” as if it is so surprising for a female to be successful at graffiti.
I want other females to know they are capable of anything.

Is the sexism in graffiti proportional to attitudes of society at large?
Because graffiti is still male-dominated, I believe there is more sexism than in society. Unfortunately, graffiti culture is filled with toxic masculinity, homophobia, misogyny, aggressiveness, etc.  And this needs to change.
Because of this female writers have to work harder to be recognized in the graffiti community.
But every year I see more and more female writers out there! The more ladies the better! 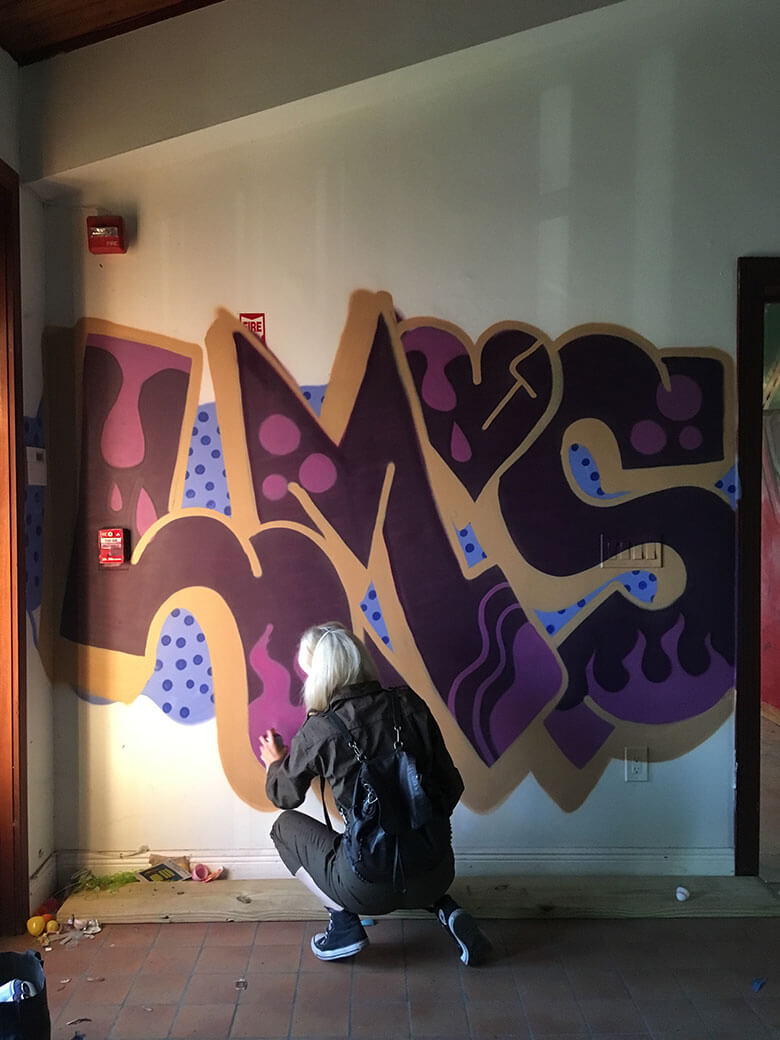