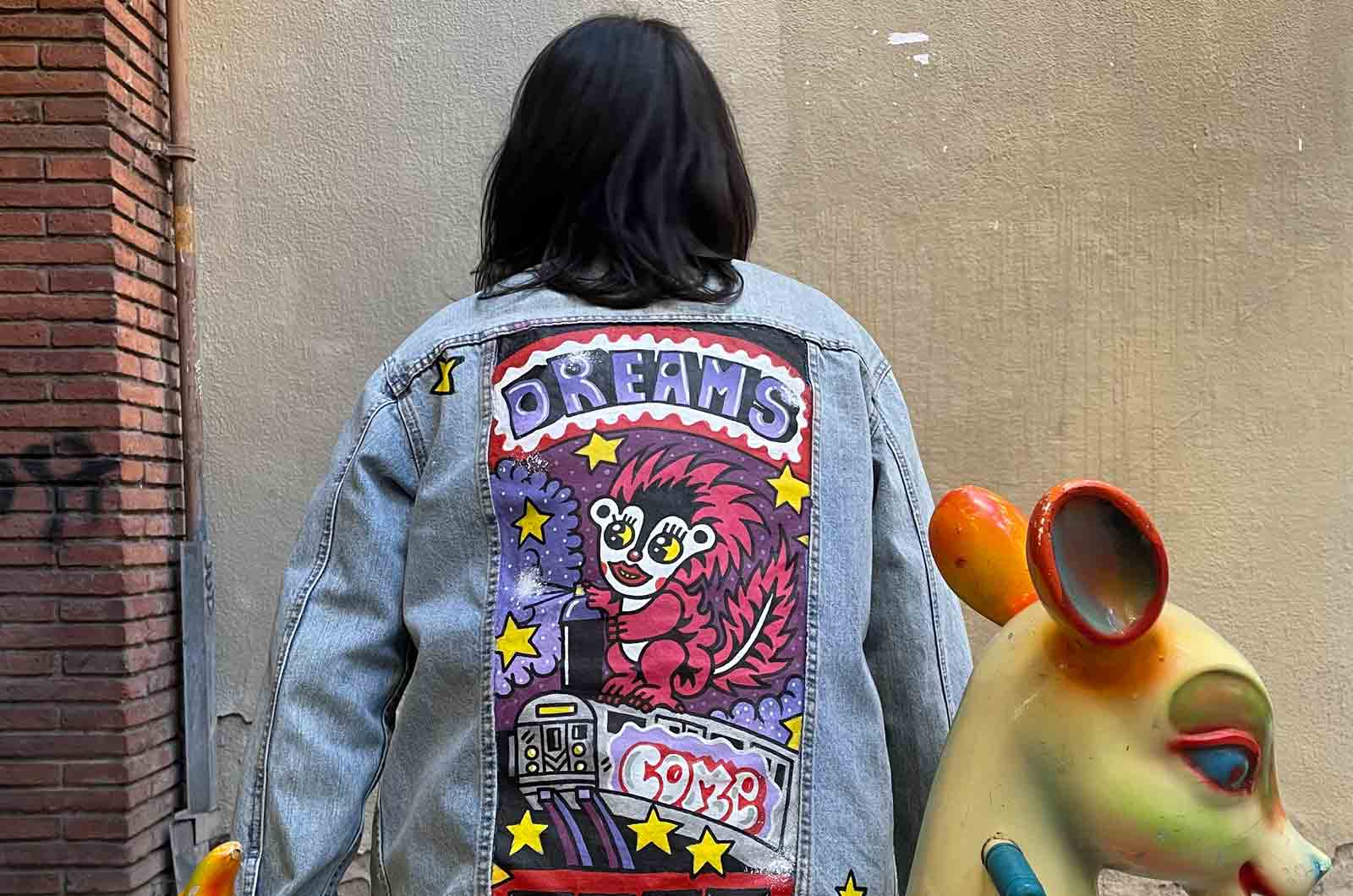 Polfish is a young Barcelona based artist who applied his off key approach to murals, canvas, tattoo art and clothing design with clear roots in the local graffiti scene. We recently filmed him at work in his studio producing a custom denim jacket and wanted to get his opinions on a style that sometimes divides opinions but is growing in popularity.

This interview is part of our #mtnartmonth: a campaign to push the most creative applications of our products. For more artistic content, be sure to search for #mtnartmonth across all our social media accounts.

“Graffiti Ruined My Life” is a slogan that featured on a wall that you painted earlier this year. Does this phrase represent your relationship with graffiti?
I try not to think too much about what I’m going to do before painting this type of wall in order to give more room to spontaneity. I came up with the phrase, like the sketch on the wall, about ten minutes before I met my friend that I painted with, and it is basically related to the friendship the two of us share.
We met up again to paint that day after ten years of hardly any contact. We had been great friends but grew apart, not for any specific reason, we both just took our own path. He stopped painting and I continued. We could say that thanks to COVID-19, he rekindled his love for graffiti and suggested meeting up and painting.
The day before the mural we linked to catch up, and we went over the thousands of things that had happened to us in the past decade. That was when I realized that I had so many things to tell him. Too many! Most of them were related to graffiti in a direct or indirect way.
My stories, which were so different from his, made me think…
When I did the sketch, it was the first phrase that came to mind, giving an ironic twist to the traditional phrase that I’ve seen around: “Graffiti saved my life.”
Graffiti has not ruined or saved my life.
I’m doing very well in life, so I’m sure graffiti didn’t ruin it. Nor do I think it saved me.
I don’t know if something external saves or ruins you, in the end you always have the final say on what to do with your life. But what I do know is that graffiti has had a big influence on my life. It is a part of me and it has inevitably dictated all the things that I have stopped doing for graffiti. Simply that. 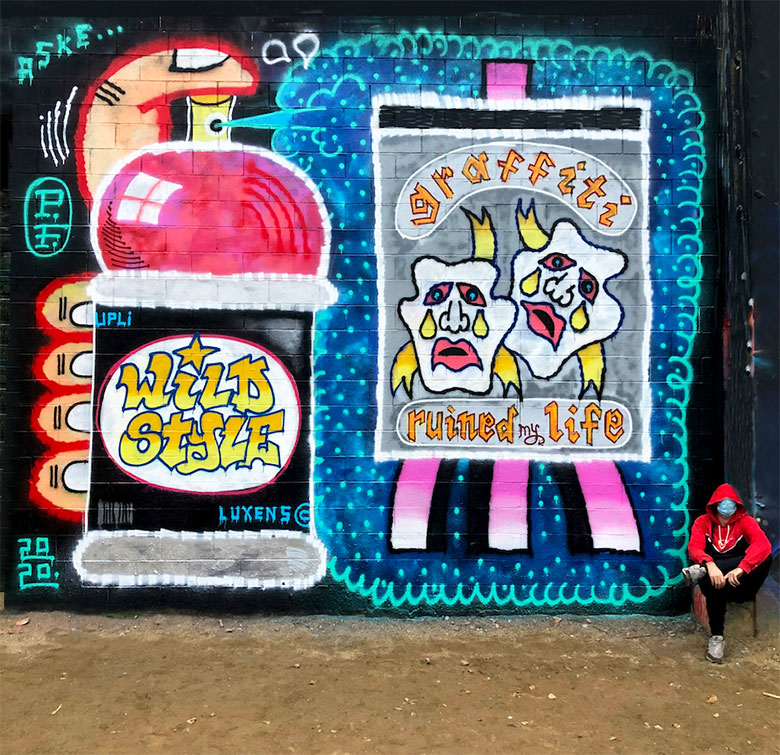 However, graffiti clearly informs your technique and style. What are your main influences from aerosol art?
Yes, I’ve been obsessed with graffiti for many years, and it’s something that I can’t detach myself from, even if I wanted to. However, I like to be influenced by as many different creative fields as possible. As far as the aerosol goes, what inspires me most today are definitely the people who are least adept with a spray can. I love that naivety, it transmits purity to me. People who aren’t even as good as toys are the ones I learn the most from. And of course, the classics are always an influence. 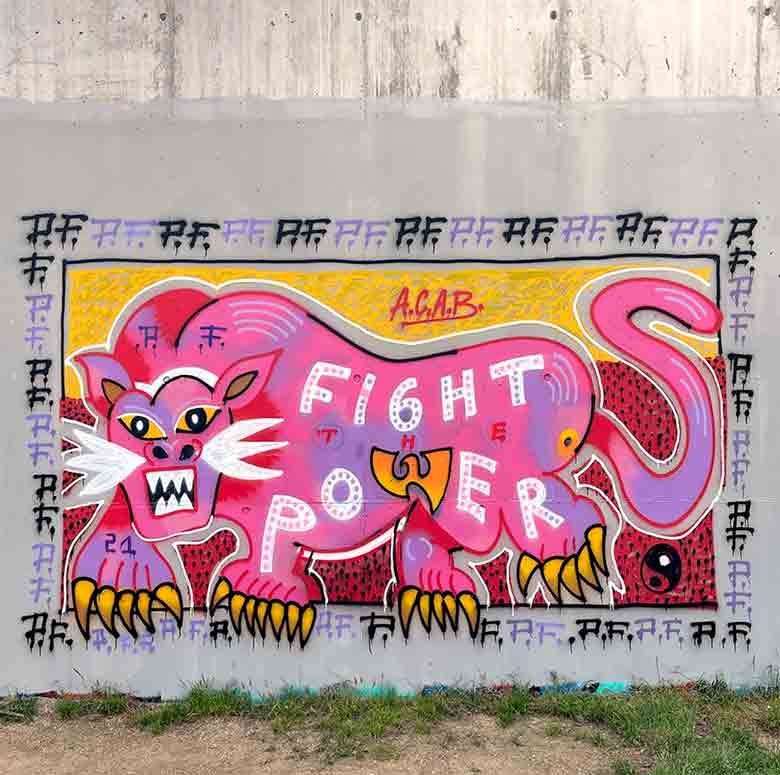 Who are the artists you follow outside of graffiti?
I don’t follow anyone in particular because they come and go. But in all the disciplines that I like, there are artists with that I connect with the most, and what they all have in common is the touch of naivety that I was talking about before. Folk artists, outsiders, art brut above all. 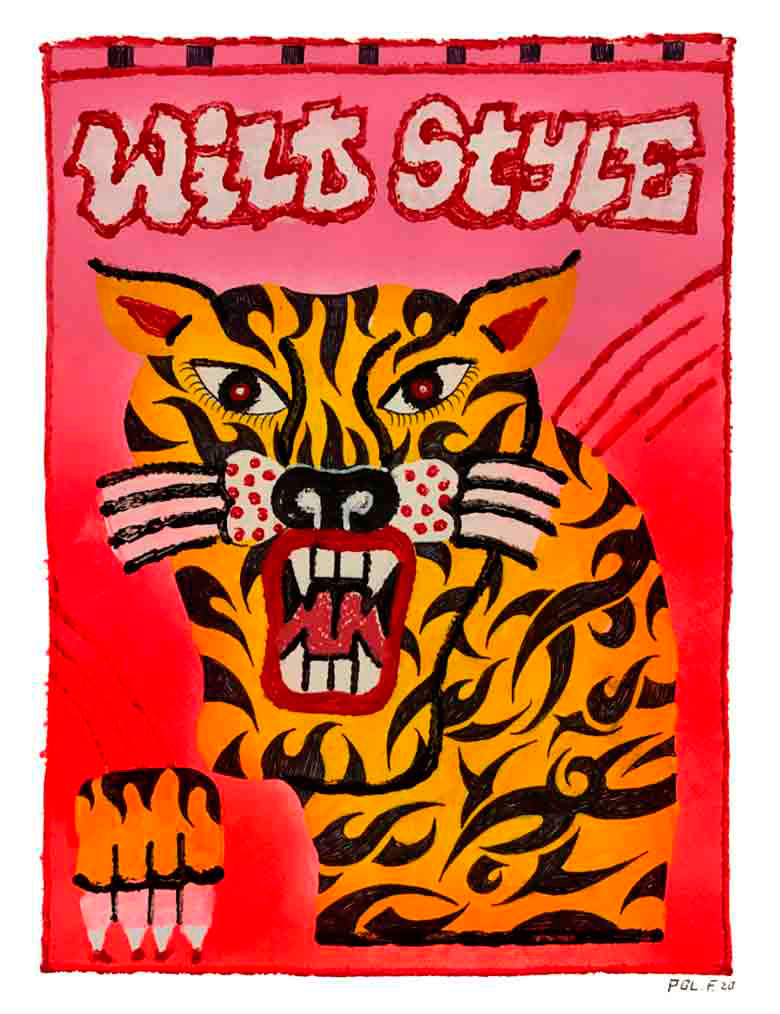 “I like to be influenced by as many different creative fields as possible. As far as the aerosol goes, what inspires me most today are definitely the people who are least adept with a spray can.”

How did you get into the world of tattooing? How has your practice influenced your graffiti?
Through a friend who had a tattoo machine. He bought it for himself, got tired of it on the second day and gave it to me in exchange for a tattoo. I have always sketched and all my friends began to ask me to tattoo them as well. I discovered that I had a passion for it which has been with me ever since.
I don’t know if tattoo design has had an effect on my technique with a spray can, but it has influenced my style. A lot of iconography that I use comes from tattoo culture or its references. 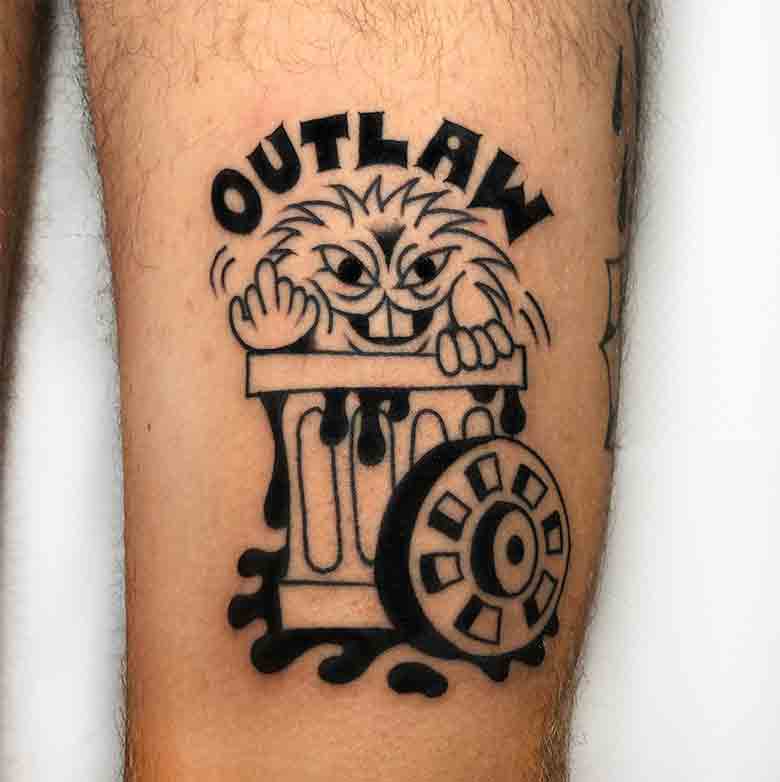 You have been able to travel a lot with your art, from Madrid, London and Tokyo among other places. Do you have any special anecdotes from your travels?
I have loads, but I can’t tell the best ones in this interview (laughs).
I love traveling and since I was a teenager I have done it as much as possible. I was already traveling a lot before doing it for my art. It’s a form of exploration, learning and freedom that I have always loved.
Out of the cities you mention, Tokyo was the craziest. The cultural differences alone would warrant an entire interview, not even getting into the stories as a tourist there. Doing an exhibition and seeing how the Japanese work was fascinating. I really want to go back soon! 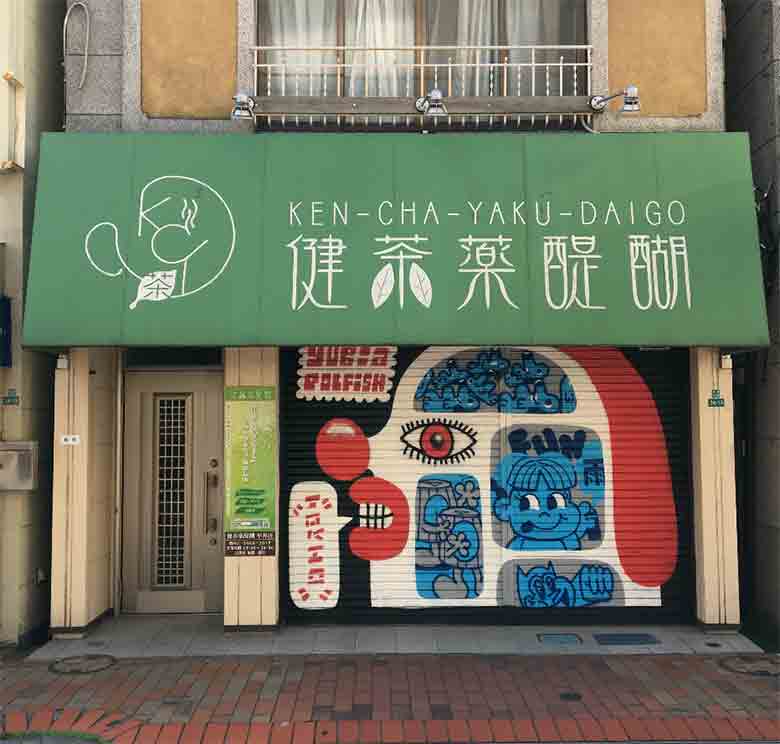 “Graffiti has had a big influence on my life. It is a part of me and it has inevitably dictated all the things that I have stopped doing for graffiti.”

Your work is part of an outsider movement, always with a naïve approach to illustrations and phrases. How can you tell the difference between quality art brut and something just done poorly?
I don’t know what movement my work is part of. But I love the outsider vibe and it’s certainly naïve too.
The question is difficult to answer. There is such a fine line between the two that it is very difficult to distinguish.
For me, try to judge the quality of the art through the connection that I have with the work when I see it. Whether the feeling that connects me with the creator is pleasant. I suppose I need a to know about the background of the artist to be able to understand it and relate. I don’t know. 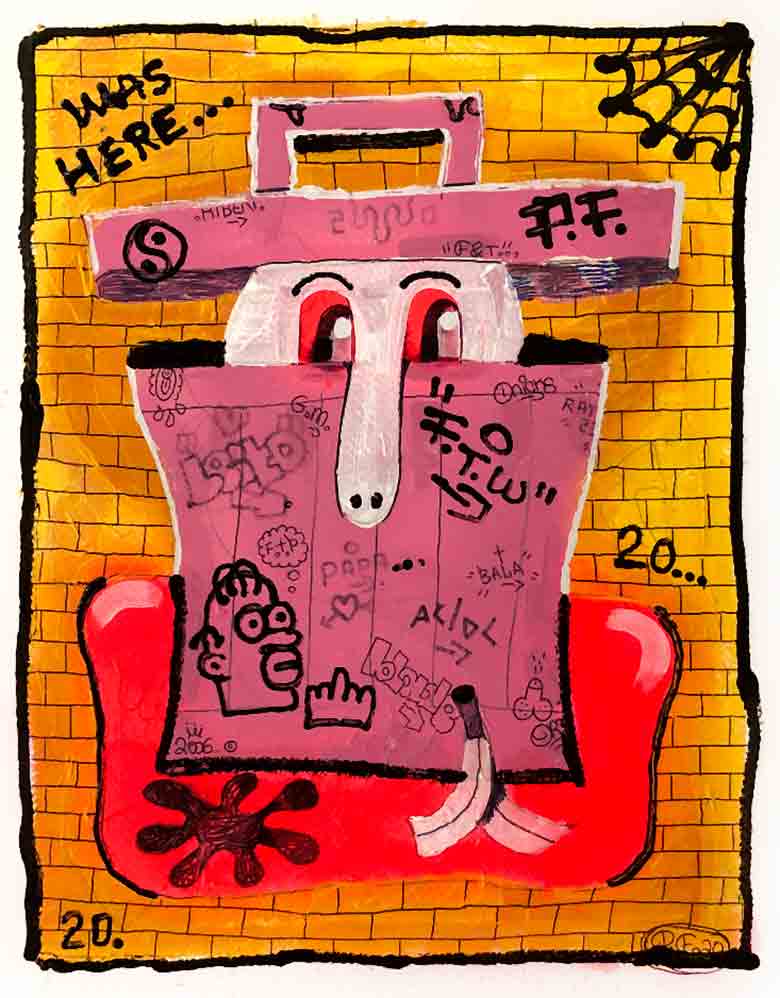 Is the style geographically based, or is it a style that can be found all over the world?
There is style all over the world and everywhere.
Everything that surrounds us has style. For me, there is much more style in the things that don’t try to be stylish. But style is subjective and exists wherever the viewer wants to see it. 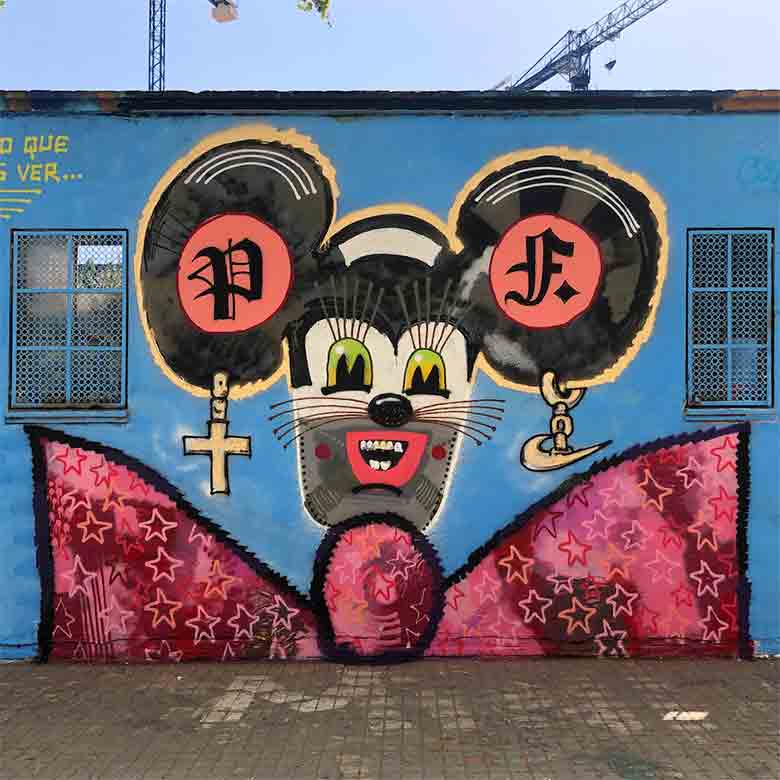 You share a space in Gràcia with the name of JustDoIt Studio. What kind of community is it? What advantages to work in this way?
It is a space that I share with several friends basically set up to work, experiment and learn. To create in general. Drawing, painting or whatever you want to do. And that space facilitates it.
You learn a lot by sharing, personally it is very good for me to see how other people work, what they do, what inspires them, or how they do things. You can learn from everyone and everything. 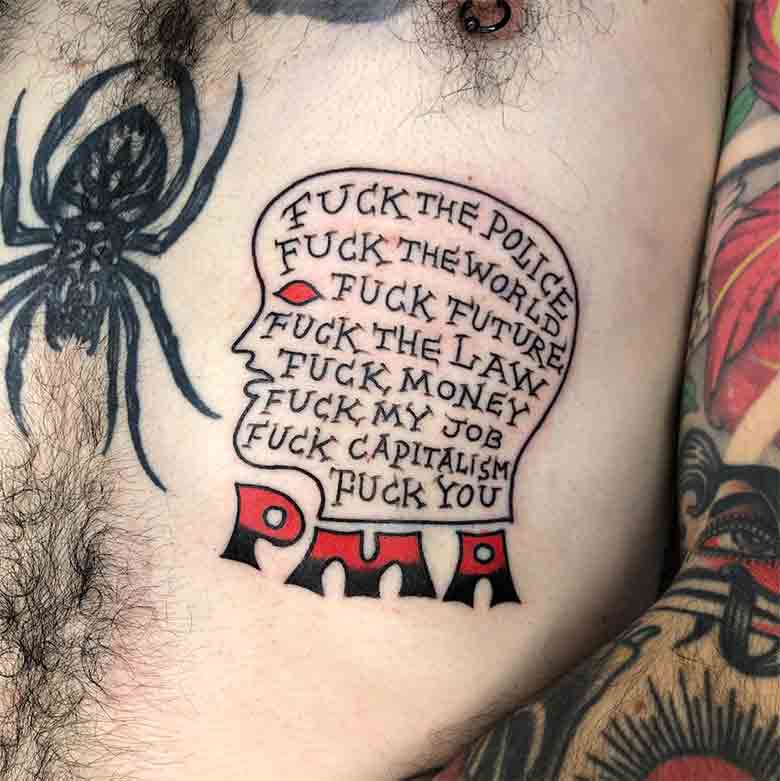 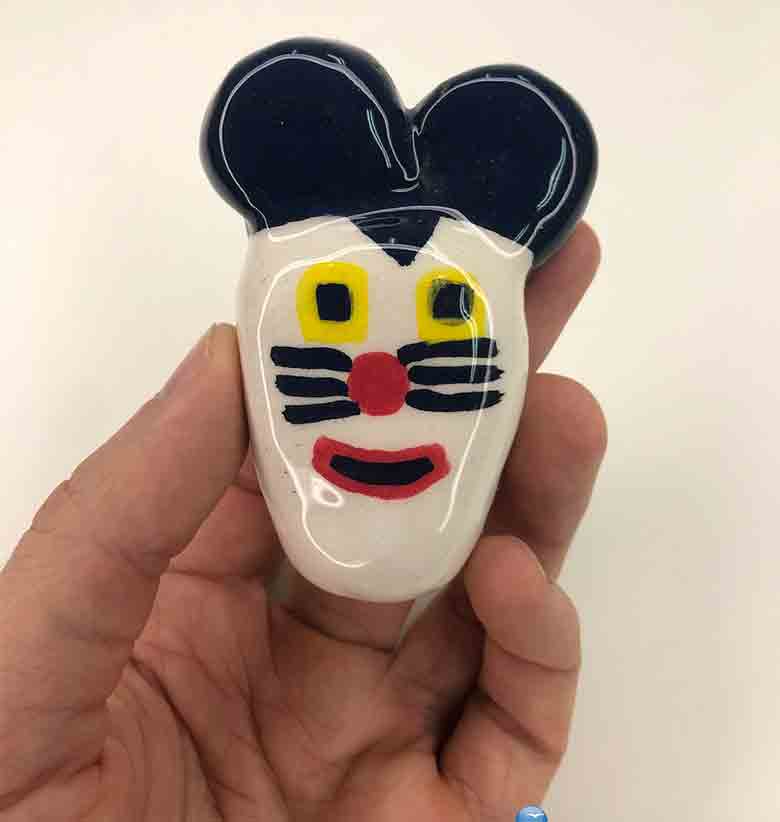 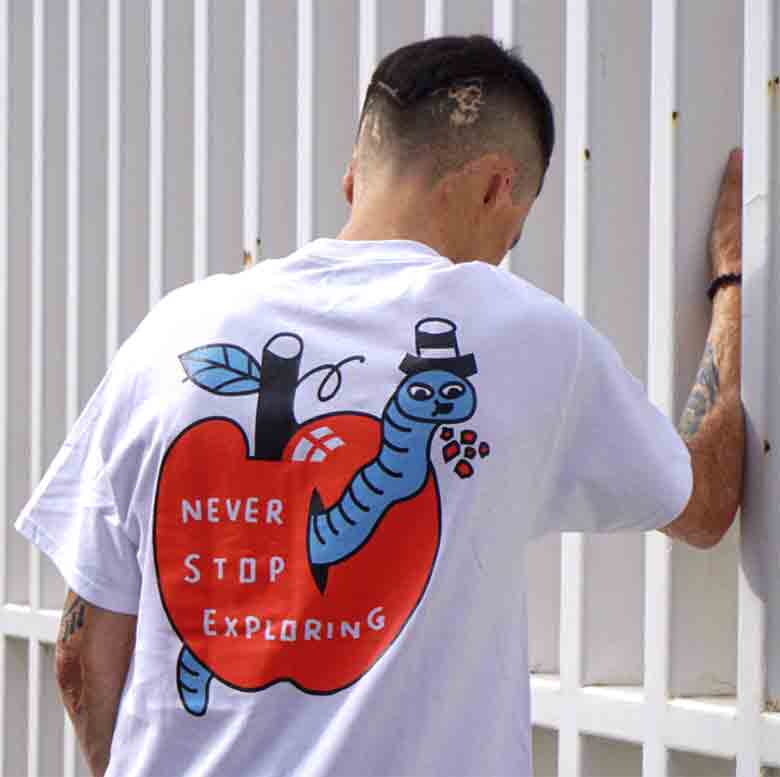 We recently saw on Montana Colors’ social networks how you applied products from the Water Based line to a denim jacket to create a piece of the traditional hip-hop format. Do you consider the result a piece of art to preserve, or something to be worn in the street?
Whether you wear it out in the street or keep it at home, it’s the same piece.
In this case, the jacket can be used as the owner of it wishes. I have simply done my part, and what they do with it afterwards is fine with me.
Whether it should not be worn in the street because of its value, and preserving it better, is a different question. I personally like to see art everywhere, and if it means it will be damaged, I don’t mind. I see charm in the ephemeral and what deteriorates, like life itself, hehe. 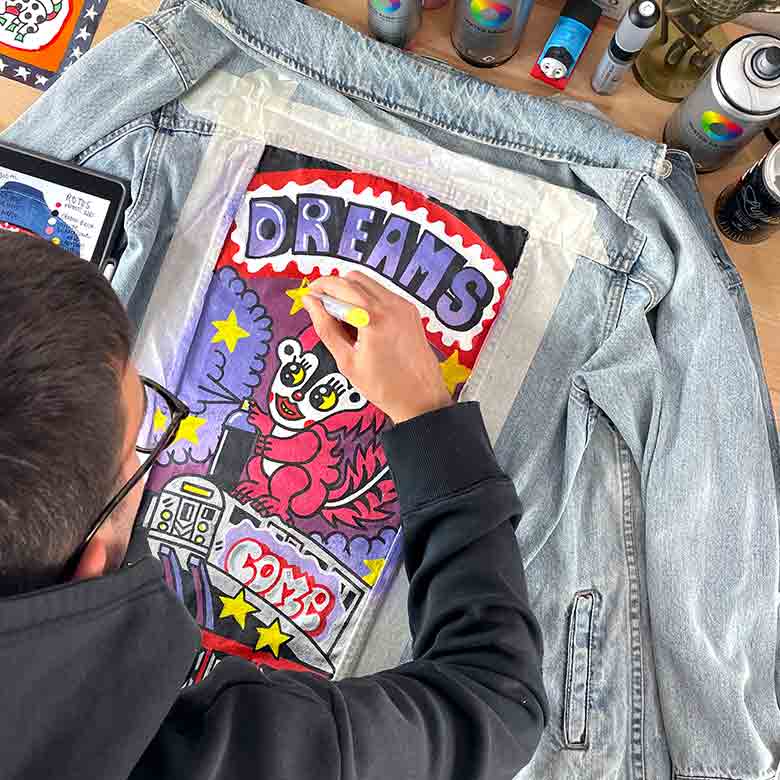