Montana Colors is a Catalan company open to the world. Its Culture Department plays an active role in cultural activities anywhere you can find the spray paint, but we obviously have a special interest in events and initiatives that take place close to our HQ in Catalunya. As part of a campaign to restart cultural life in our region, we joined forces with broadcaster TV3 for a program of concerts spread throughout the territory earlier this month. Culture Dept. at Montana Colors tells us the complete story…

On Sunday May 2, the Catalan public television channel TV3 presented Operació Cultura. Collaborating with the Institut Català d’Empreses Culturals (ICEC) – an organization that forms part of the Department of Culture of the Generalitat de Catalunya – the project aimed to draw attention to the importance of cultural activity in our day-to-day lives.

The events of the day underlined the urgent need to restart cultural activity in the region, from music to theatre and the arts: sectors that have been amongst the most affected throughout the national state of alarm. Industry representatives have questioned the effectiveness of the restrictions on freedom of movement and public events, making access to culture limited, and they have been campaigning tirelessly over the last few months for the right to work, using the hashtag #culturasegura.
This historic and celebratory event featured up a good-humored musical protest in the form of a special evening television program. Custom double-decker open-top buses served as stages for the occasion, welcoming celebrated singers, bands and DJs who entertained viewers as well as spectators in the four main Catalan cities: Barcelona, ​​Girona, Lleida and Tarragona.

The buses, which belong to the fleet of Transports Metropolitans de Barcelona (TMB) tourist buses, were not limited to showcasing musical talent. The Montana Colors Culture Department curated a group of artists to fully decorate the exterior of the vehicles, inspired by the ideals of the event.
Yubia, Dirty1984, Colectivo Baricela and Noble brought color to the emblematic cities in Catalunya, illustrating a mobile wall of sound that attracted delighted crowds with the surprise program of concerts.

The interventions were produced using paint from the MTN 94 and Hardcore lines, with a different colorway employed by each artist. Yubia used reds, garnets and warm tones for the Tarragona bus, Dirty went for faded blues on the bus that went to Girona. Noble used a selection of greens for the piece destined for Lleida, and Colectivo Baricela chose violets and purples on a light background for the Barcelona bus, the only vehicle that remained static throughout the entire program.

Graffiti, muralism and urban art were presented as an essential part in the recovery of contemporary culture, occupying a prominent space and joining forces with other sectors to promote the importance of supporting the arts scene so affected by measures taken during the pandemic.

Statements and bio of the participating artists

My name’s Yubia, I was born in Getxo (Bizkaia), and I’ve lived in Barcelona for more than 12 years. I studied Fine Arts at the UPV, and I started painting graffiti in 2002, but since I was little I have always loved drawing and doing crafts. Since 2011 I have been working as a graphic designer at Montana Colors and I’m also a freelance illustrator.
Thanks to graffiti, I have traveled all over the world, I have participated in different festivals and exhibitions, at home and abroad; Italy, Germany, Tokyo and so on. I had the opportunity to visit Palestine in 2011 and painted the wall. Thanks to graffiti, I’ve got to know so many great places and people.
On the bus, I’ve done what I like doing the most: write my name! On one side, I did a graffiti piece with several of my characters, based on spray can nozzles. On the other side, I painted a mural with the help of Polfish featuring various characters, and the slogan “Fem Cultura” (Let’s Do Culture): because we need to be able to enjoy music, art and the theater.
The back was painted entirely by Polfish, and it’s based on his favorite kid’s show, “Pingu.” It’s a little tribute to the penguin, a reference to fond childhood memories.
The cultural industries can’t wait any longer. Culture creates a society with more opportunities, with more critical sense and capacity to make decisions: essential in modern times.

Dirty is an artist, designer and illustrator from L’Hospitalet del Llobregat. He studied graphic design at the Llotja and Serra i Abella schools.
He has worked several times for the Hospitalet City Council, producing large murals in the area. Amongst his favorites is a personal project called “The Giant of Collserola”, a mural located in the natural park just outside of Barcelona. He currently works at the Montana Shop Barcelona – Gràcia.
The piece refers to the contemporary situation, using the metaphor of drowning. The artist states that we need culture more than ever and how it should be up to the population to manage: “Culture is drowning and we are too. By rescuing it, we rescue ourselves. We need the entire arts scene, it’s not enough for a couple of eyes and ears to breach the surface, we need to enjoy culture with all five senses!”

Colectivo Baricela is a group made up of eight girls: Anna Baquero, Becca Morgan, Elia Moliner, Gemma Fontanals, Mónica Toledo, Nieves Mondaray, Ola Marcet and Rita Fittipaldi.
Most of us live in Barcelona (one of us is in Brazil and the other is in the United States), and we work in the fields of illustration, graphic design and teaching.
We met while studying at the Eina school and we created the collective to carry out projects to explain our point of view, through painting walls and self-publishing fanzines. Some examples are “Danger of Contagion”, with anecdotes about (pre-pandemic!) inflection, “Coven”, where we explain our sympathies for witchcraft, and “The Comet”, full of stories that take place on the day that a star passes.
We participate in fairs and give workshops and talks, but above all, we are friends who meet to draw together.
The design we painted on the bus, designed by Gemma, is a celebration of culture: the protagonists play records, sing, play, dance, act, draw, write, read, paint and also take selfies. They are all women because of a question of representation: it’s important to us to claim spaces, in this area as well as in so many others. They have a good time, they laugh, they enjoy themselves, they help each other, they love each other, because that’s how we see ourselves. 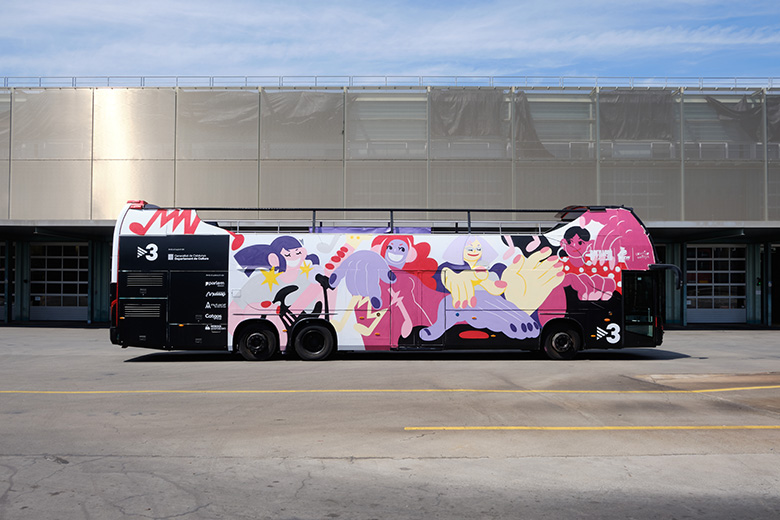 My name is Xavi Torras i Corbella, aka Noble. I was born in Terrassa but I live in Barcelona.
Artistically speaking, I have always drawn, producing illustrations and comics. In 2003 I started to use spray paint, which has become one of the most important tools for expressing myself, both on walls and on canvas.
In the world of graffiti, I have participated in festivals and exhibitions, both locally, nationally and internationally, such as the Meeting of Styles graffiti festival in Wiesbaden, Antwerp and Full Colors in Rubí, to name a couple.
Being involved in urban art and meeting many people in this creative sector resulted in the opportunity to be part of the Montana Colors team: in 2018, I joined the company that manufactures and distributes the aerosols that I’ve used since the beginning of my artistic journey.
On the bus I wanted to represent a mixture of graffiti, design and pop art in my style. It’s a statement of solidarity with the cultural industries, featuring the slogan “KNOW YOUR CULTURE” on one side of the bus and  “ATAC CULTURAL!” (Cultural attack!) on the other. Slogans to make us appreciate what we have, that is valued less and less every day. We need culture to permeate everything, and to do so, we have to take part in it. To value it, we have to spread it, to produce it, we have to claim it. Let’s get to work, let’s hurry. Although we’re late, very late, culture is hope, like the green of growing fields, like a future that feeds from our ancient, authentic roots!