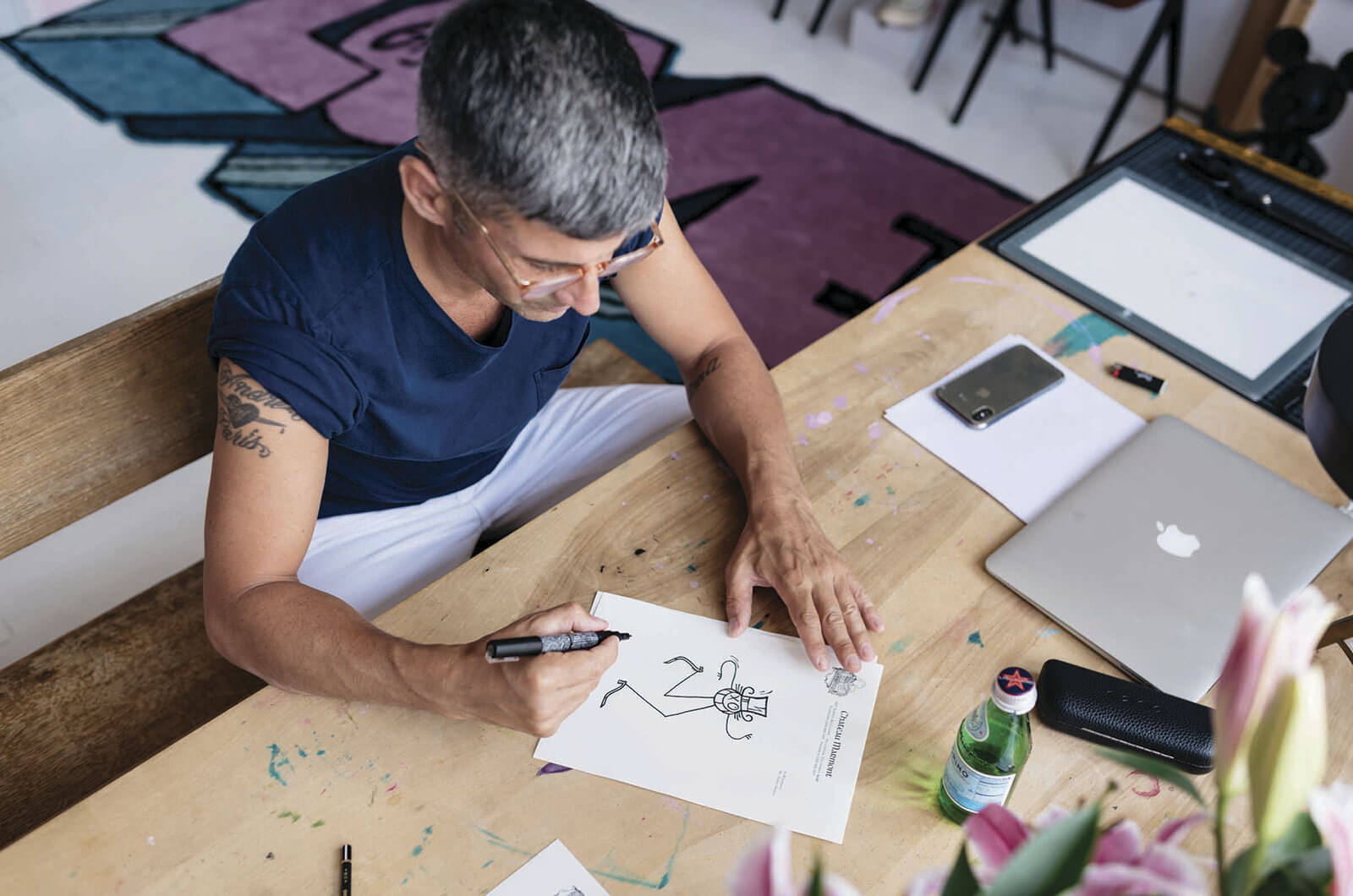 This interview first appeared in Tramontana 2 in 2019. To mark the occasion of the new MTN Limited Edition design in collaboration with André Saraiva and Beyond The Streets, MTN World publish the in depth interview in its entirety online for the first time.

Charlotte, André’s assistant, quotes me at the place where the artist has developed his latest project, the Grand Hôtel Amour. There I discover the giant Monsieur A. that borders on the hotel but also all the pink shutters – a color for which he feels a particular devotion – on the surrounding shops. The street belongs to you!

Genesis
I got serious with the tags in ’86. I had a catastrophic period in which I had different names like Crazy Cat, referring to an American comic from the 1920s. There were more tags on the walls of Paris at the time; Boxer, Bando and Sign … among others. The walls were our only possible reference. I discovered the graffiti thanks to Monsieur Bando, who was responsible for all this in Europe, and Boxer, notable Parisian graffiti artist. I learned and I was inspired by all of them. 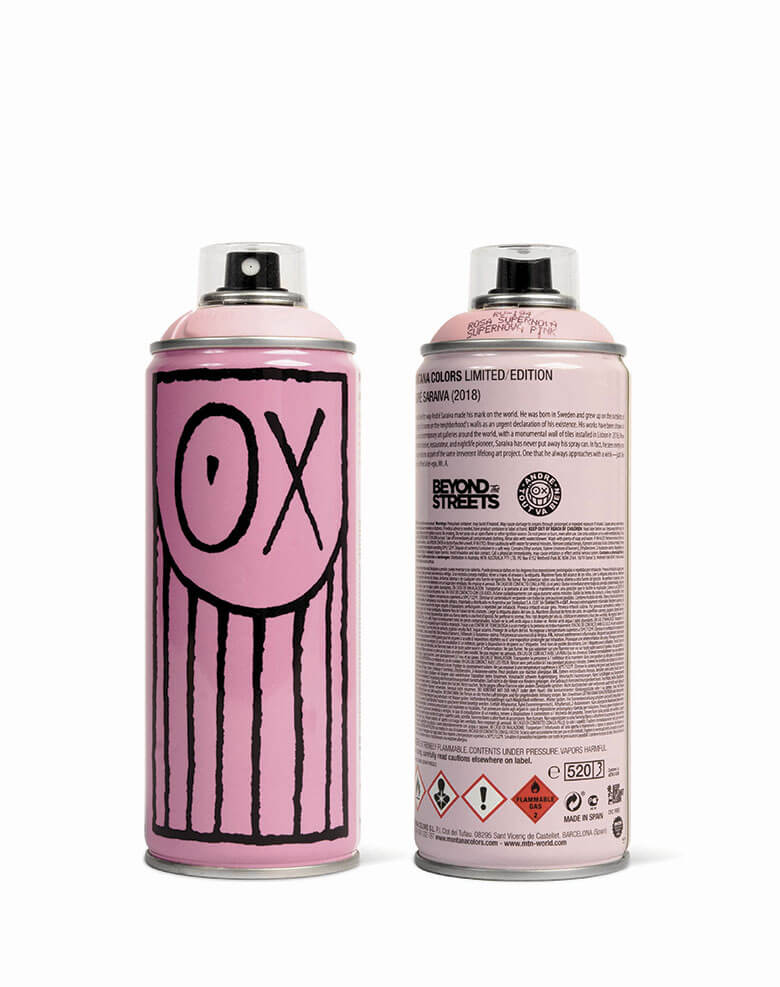 Monsieur A.
You have signed for a long time with a very Parisian and legible style and you also draw a character, Monsieur A.
I’ve always made tags and I think I still do, my character Monsieur A is a tag. For me it is a signature. I loved seeing my name on the walls, but at the end of the 80s and the beginning of the 90s there were so many that Paris was saturated. We did it mainly for and for us, we were just kids. The street belongs to everyone, so I thought we should start talking to other people. At that time, that was not done in graffiti. Everyone has an “Andrew” in his family, was readable and understandable to all. In a time when names of American origin were used, I chose that name with a small accent on the ‘e’, ​​which was not styled at all.

What does Monsieur A convey?
A: A feeling of freedom. He is happy by nature. Each one projects what they want on the character, once drawn on a wall or a sheet of paper, it does not belong to me anymore. It happens to belong to the imagination of each one, it is the reason why I tell very little about Monsieur A. I always tell the story of a homeless person who was talking with Monsieur A.
Olivier: They marked the history of graffiti, you made them in places amazing.
A: I did at the Opéra Garnier and at the Saint Jacques Tower. Zevs filmed everything and made a small documentary about that time. Mode2 ensures that everything has influenced enough people in the world. He could paint between 50 and 100 a day.

Are you like your character?
No, although sometimes it’s my alter ego. In plan Dr. Jekyll & Mister Hyde. The graffiti forms a shell. I was talking about Mode2 recently, we’ve lived so many things … It was violent. Graffiti is not coming, painting things for a year and making a name. We have been painting in the streets for ten, twenty and thirty years, eating many problems. Once the bad drink is over, you forge the shell, the style and the language. It is a long way. 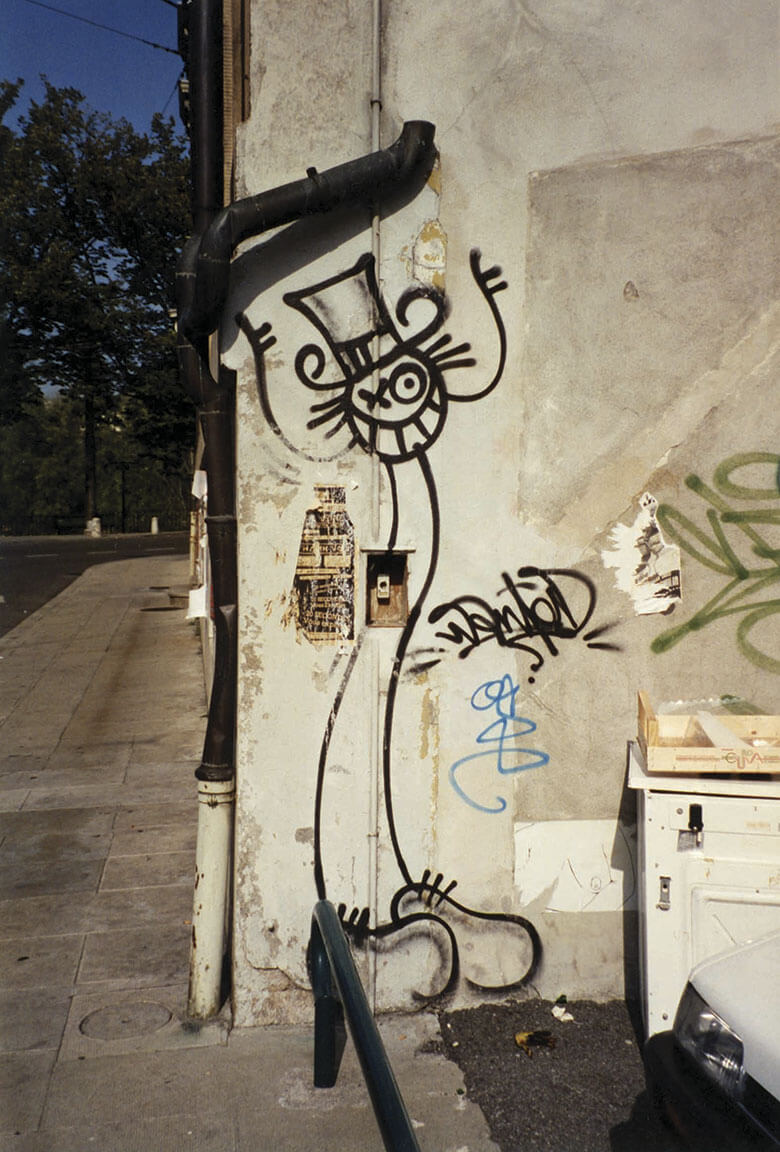 A unique generation
That generation of graffiti was great, clandestine and passionate. I keep seeing some of my time because they got stuck and live in NYC … but more than half disappeared. Yesterday I was with Mode2. It has more than 40,000 photos of this entire journey. He was a revolutionary, he’s still a legend. It is the jazz man of the spray. Popay sent me a picture of his last wall, very beautiful. I respect all those people very much. If we do not support each other, our history is doomed to disappear because there are not many people left to tell it. 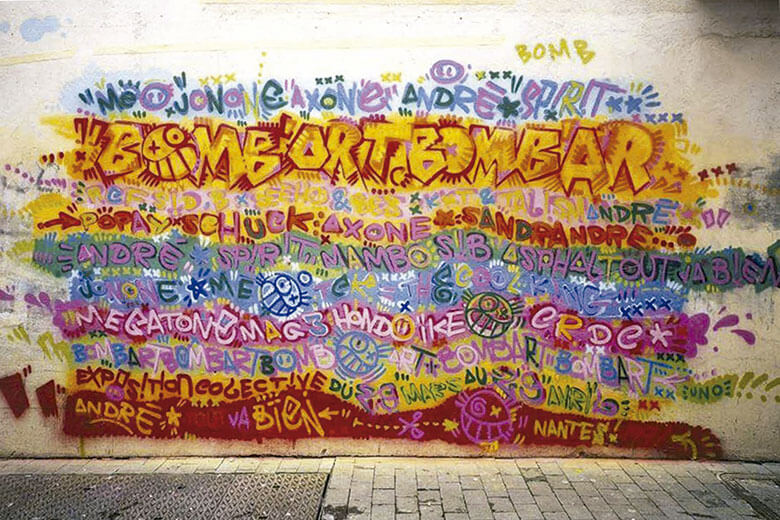 The generation “Do it Yourself”
A: There were no publications on graffiti. If someone printed the photos he made, the others reproduced them to have them. It was a cultural universe and you had to make an effort to access it. Nor was there material dedicated exclusively to graffiti, we had to look for life. There were no tents or Montana sprays. We made everything, including the tools we used to paint.

What do you think of contemporary graffiti?
A: In New York there is a pretty impressive return to the throw-up. In Paris, there are very good people. I just like a simple tag. I look at the walls, the signatures, everything there is. 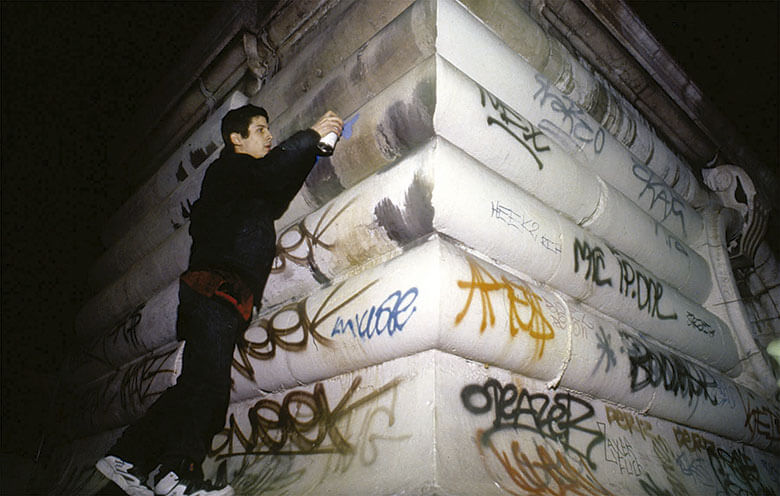 The art market
A: I’m not interested. I think that most of the graffiti galleries leave a lot to be desired. I refuse to step on an auction house. When some of my works end there I try to take them out, they are almost always stolen pieces. There are few people who know what they are talking about or collecting for good reasons. Good exhibitions are counted on the fingers of one hand. There are few projects of the caliber of Art in the Streets by Jeffrey Deitch, Roger Gastman and Aaron Rose. Of course, I understand that my colleagues need to make a living, but I think that graffiti history should be told more and educate society accordingly.
Some galleries start doing it, like Magda Danysz. There are also good galleries that expose graffiti artists without differentiating them from other art forms. When Perrotin exposes Brian Kaws, I think he’s doing a good job. It is also the responsibility of the graffiti world to stop enclosing itself in a “ghetto” style. I think more and more interesting stories are told. 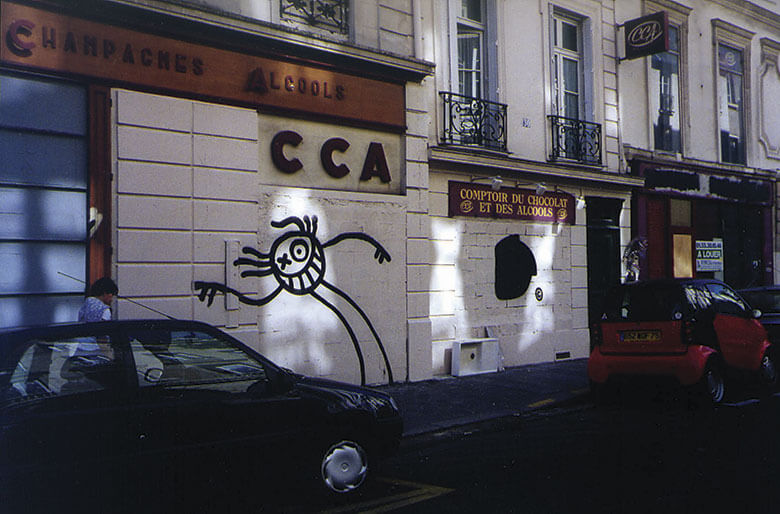 How do you see the management of Agnès B in graffiti?
A: Agnes has been and is essential. It has helped many painters, Futura for example. Thanks to her I saw Lenny painting for the first time. The first exhibition that brought us all together in Paris was his. He has defended Jonone, O’Clock … Graffiti gold medal for Madame Agnès.

Love
A: It is part of life. I wrote the name of my girls on the walls, then I put my talent at the service of my friends. I became a public writer.

Means of communication
My first appearance in the press on a large scale was the cover of the newspaper Express. It was a competition between artists and they chose the cover I proposed. As for discovery, I do not know, nobody discovered me: at that time it was rare that someone outside the medium was interested in graffiti. 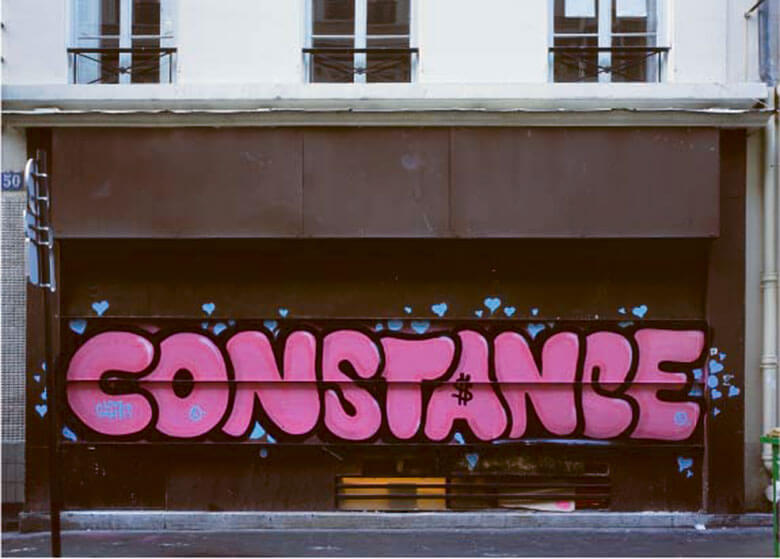 A: The son of Gainsbourg calls me one day and tells me that he wants to do a tribute concert to his father in one of the mythical halls of New York. There were only icons on the sign, Lou Reed among them. The concert was never done but while doing the poster I felt that in a certain way it was real and the idea of ​​the Dream Concerts was born.
O: I fell into the trap. Lek did not let go when I told him.
A: That uncertainty is constant in graffiti. What is true and what is not? In some way our mind makes it exist from the moment you plant it on the street! You are not the only one who happened: the concert hall Elysée Montmartre had voice mail saturated with messages for a concert that never existed. 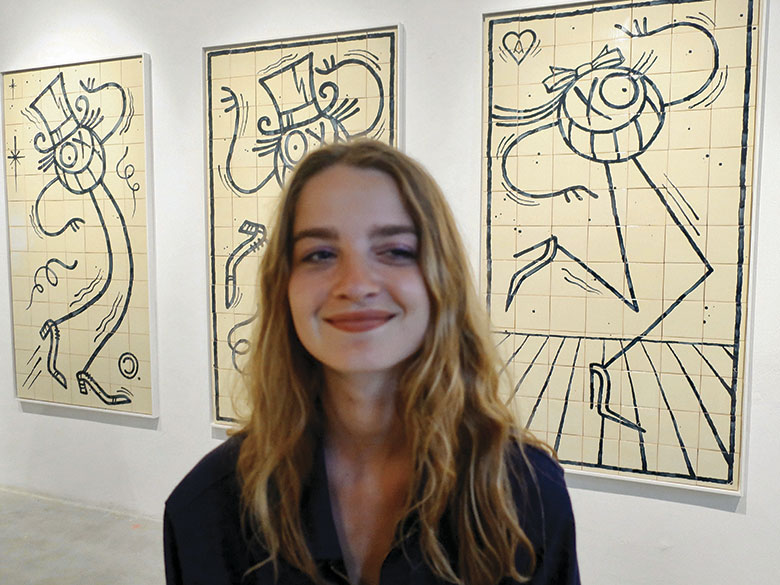 Underdogs
A: The gallery owner, Vhils, is an artist and a conservative: he does graffiti and Portugal well. I appreciate you very much. I decided to make an expo exclusively on ceramics, giving continuity to a mural I made there with tiles. The wall was 200 meters long, 70,000 tiles painted by hand. Historically, in Portugal, this technique comes from the fresco. A project of such caliber is not ephemeral, the pottery will be there for the next two hundred years … I decided to make panels for the gallery, and also spread some around the city.
Or: Do not you back down that some people try to tear them off, as Space Invader has done?
A: It would be annoying but the risk is part of the street game. I made a graffiti on the facade of a shop of my friends in Kitsuné and some decided to disassemble it entirely. The theft does not bother me if it is out of passion, that even flatters me, but when it is so they end up in auction houses… 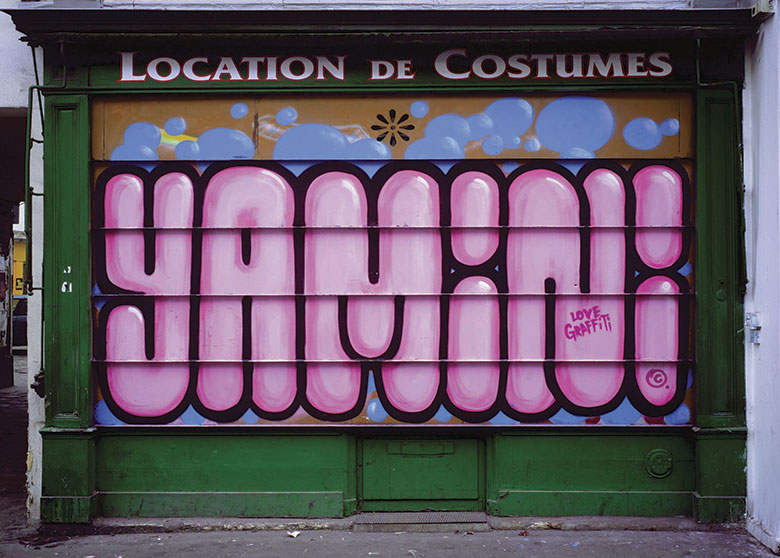 Co-branding
A: Collaborating with brands placing my art on all types of surface in the framework of various projects I do not cause no problem When you start the fundamental thing is to spread your name, even if it is drawing your drawing on a shirt. Today, to get Monsieur A to walk everywhere and also get paid for it … well, it’s fine. There are things that I refuse to do. I’m not an artistic director, I build things and one between them. If I like an idea, and they give me the freedom to do what I want, I do it. That attitude comes from graffiti, in this world you do not wait for permission, you go for it. That encourages you to do things that society does not want you to do. Passion and adrenaline are two great friends of graffiti and are two sensations that attract me enormously.
Or: From the moment a luxury brand appeals to a graffiti artist, it is automatically spoken of appropriation …
A: I was going to paint anyway on their posters, without their consent and without being paid.

The relay
They are not so young anymore but I love Lek and all that band. The people who defend Hugo Vitrani are excellent. There are also the PAL, Horfe, the UV TPK: the people who break everything. I respect everyone who takes risks.

Both Tramontana 1 and 2 are available for download in PDF format. Send an email to hello@tramontanamagazine.com with the subject: “JOIN THE TRAMONTANA CREW” and you will receive an e-mail with the download links of number 1 (2018) and 2 (2019).
Keep a close eye on the Tramontana Magazine Instagram account for news of the imminent release of the new issue! 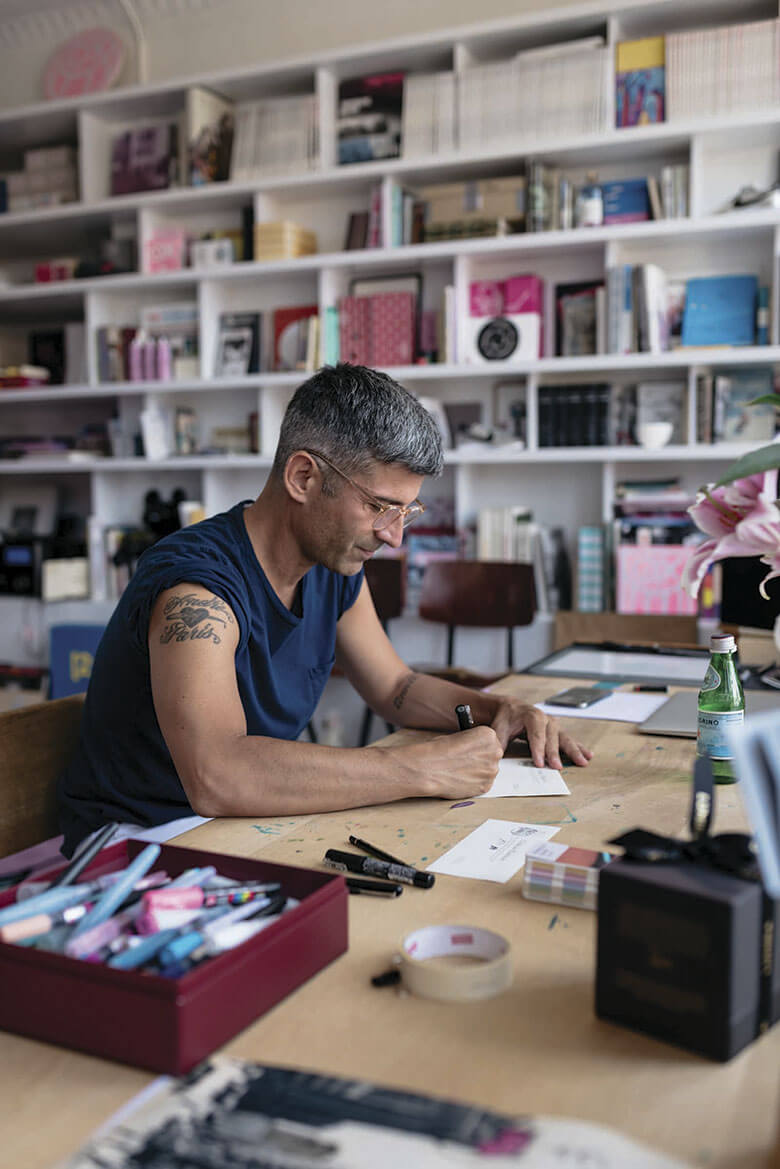 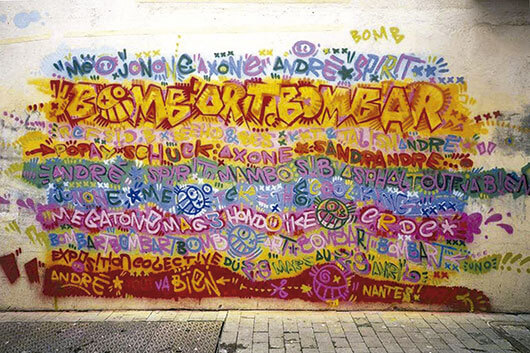