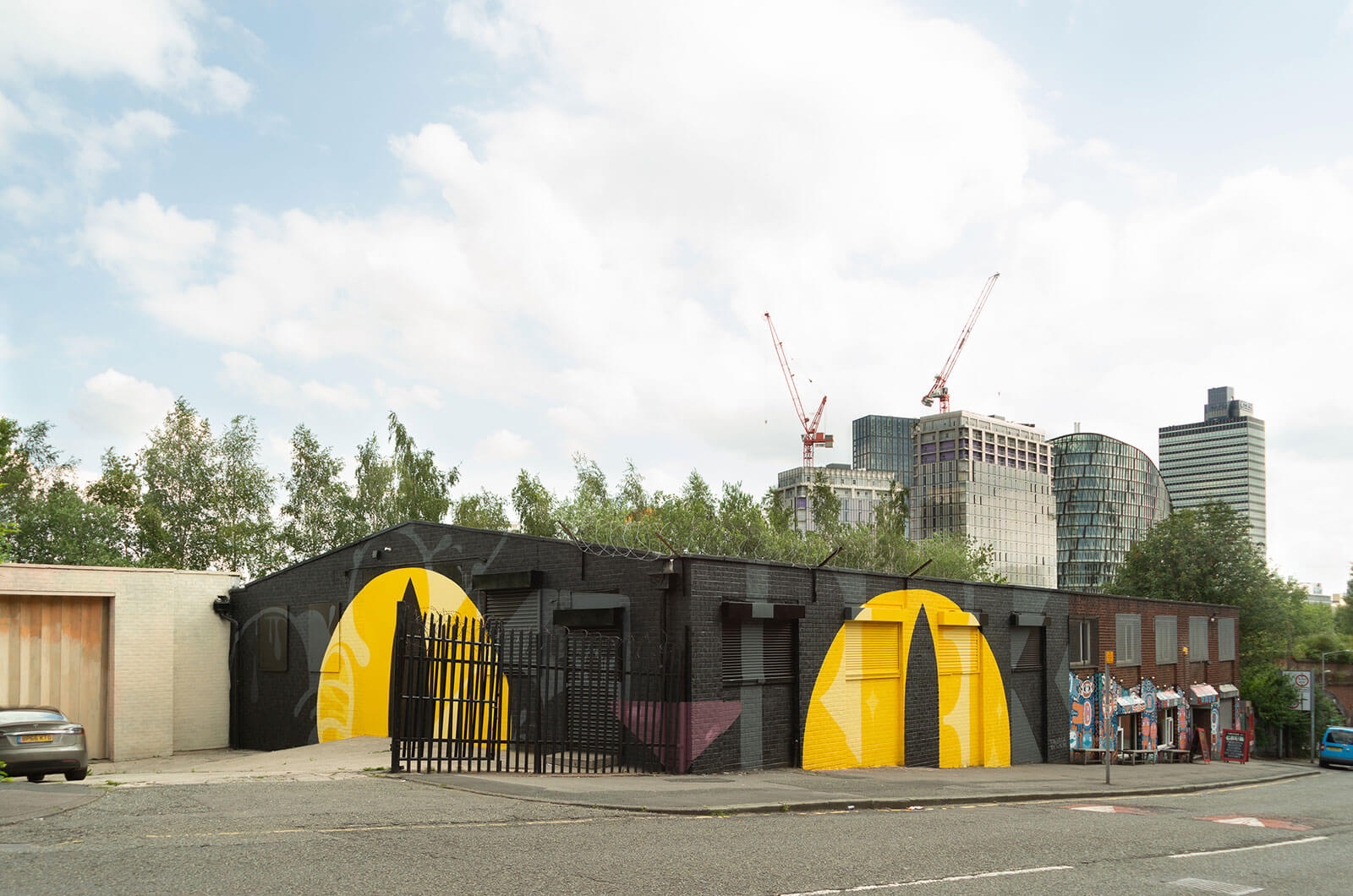 Krek is the artist behind the new intervention at the new Suspect Package HQ – the Montana Colors Dealer in Manchester, UK.
There’s an undisputed master of style based in the North of England that goes by the name of Krek FMS. Known for his psychedelic approach to tags and letters, his body of work harks back to British cultural exports like Monty Python and The Beatles’ animation as well as UK graffiti kings like Elk PFB and Petro TFW.
He was recently commissioned to provide the complete skin of the new Suspect Package premises in Manchester, where he produced a signature piece in three dimensions, informed by both design and classic graffiti. We caught up with Krek to talk about the concept, execution and documentation of the landmark project.

We can’t exactly call the new intervention a mural, because it exists in three dimensions. Which ideas led you to producing the final design?
Yeah It’s a funny one, Basically Suspect Package approached me with this huge awkward building in Redbank, Cheetham Hill in Manchester.
The basic brief was it had to be bold and recognisable from miles away. A mural that they can tell people on the phone or who are looking for it, “Oh, it’s the building that looks like this, or is a certain colour, etc.”
I like to paint big, it’s a good challenge, plus it was a super awkward space with shutters, windows, pipes, sloped with uneven floors. We certainly didn’t have the best climbing equipment available at the time, but I still thought, “Lets go huge or whatever, I’ll get lost in the scale.”
So I decided the best way to do it would be to incorporate the whole building space rather than paint something on it. Also, there’s a huge set of stairs directly opposite the corner of the building which makes a great vantage point from an elevated angle.
That’s how we got the great photos which feature the ever-growing city of Manchester behind it, with the railway and tram lines, so there’s a lot of contrasting movement from that point of view. 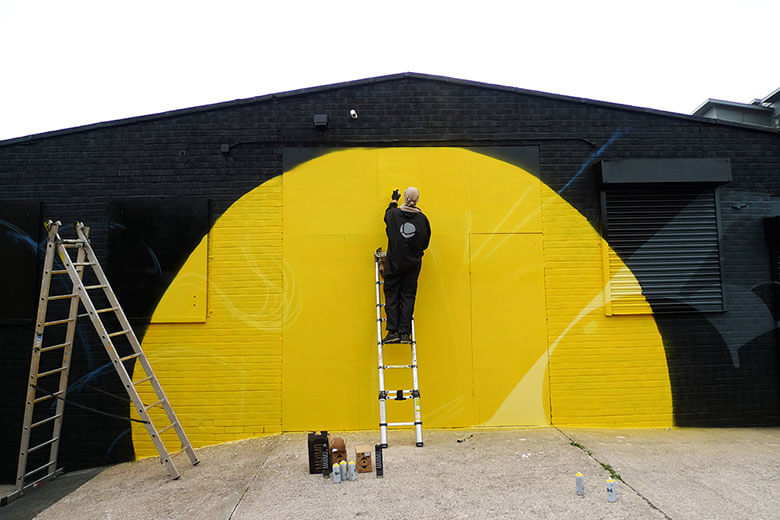 ‘I wanted something people of any age, with no concept of art, would be able to recognise. In this case, the cat. Then a more subtle dimension for us graffiti writers, with the letters “KREK” hidden on the building within that.’

The piece is both so bold that it needs to be appreciated from a distance, but contains a lot of precise and subtle detail. Can you break down the elements of the work?
I’d say that’s how I’ve always approached my work, stripping it right down so it’s super simple and bold. Let’s say the less you have going on in a piece, the more the form shows through.
I wanted something people of any age, with no concept of art, would be able to recognise. In this case, the cat. Then a more subtle dimension for us graffiti writers, with the letters “KREK” hidden on the building within that. Something for everyone.

What paints did you use to complete the intervention?
As always, Montana Colors Spray Paint.
I used a lot of high pressure Black Maximos, which was fun, and lots of Amarillo Claro for the eyes, adding in a couple of shades within that palette so the matt black contrasts with the gloss black, plus a few mid greys and some lighter yellows 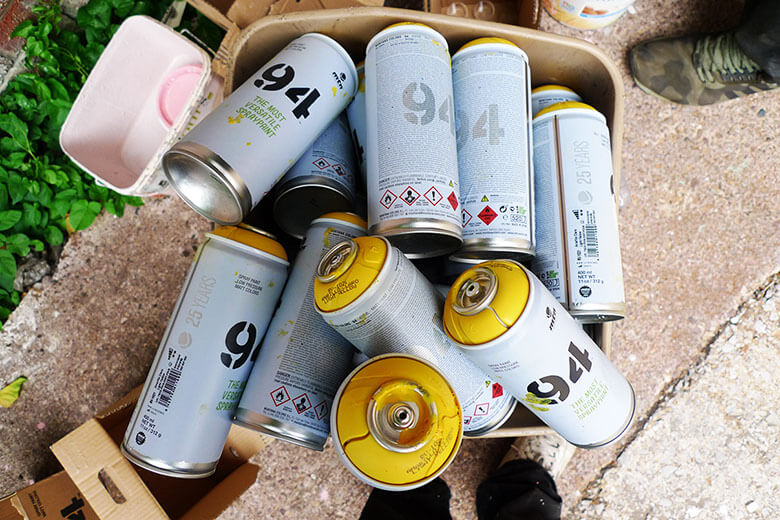 ‘Long before the likes of Flickr and Instagram, I’ve obsessively documented my process in the both the studio, and more importantly, in the streets; both legally and illegally, through traditional analog photography.’

You’ve been close to Suspect Package for some years now, did that relationship inform the conceptual design that you’ve produced?
The New Suspect Package corporate color scheme and branding is black and yellow, so you immediately think of caution signs, danger and so on.
It was an open brief, but I wanted to incorporate those colors; plus they’re great contrasting tones.
So I thought of a huge cat watching over the city, and by cutting off the eyes half way, I could make it look both sneaky or cautious – depending on how you see it.

Black cats are said to bring both bad luck and good luck, according to folklore.
Exactly.

What do black felines mean to you?
So I wanted the cat to look both good and bad. It could be considered sneaky and wise or shocked and scared depending on your interpretation. It’s usually the cat walking past us that gives us good or bad luck, whereas in this case it’s you walking past the animal. 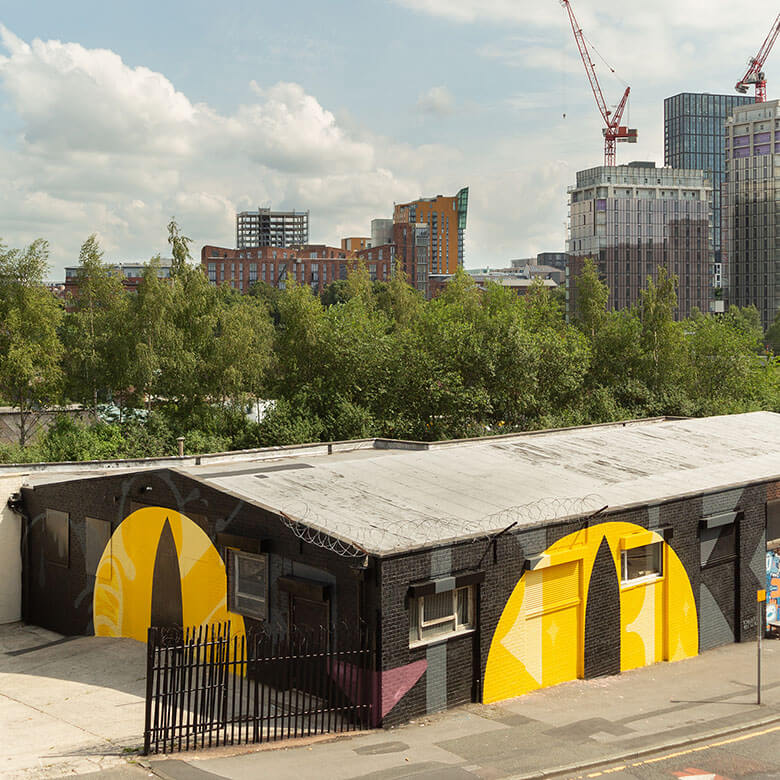 We’re promoting photography this month at Montana Colors. How important is the documentation of the process and the final piece to you?
Extremely important, often more important than the final piece itself.
Long before the likes of Flickr and Instagram, I’ve obsessively documented my process in the both the studio, and more importantly, in the streets; both legally and illegally, through traditional analog photography.
I used to run The Dead Bird blog, which later became www.krek.co.uk: a blog that started in 2004 and has now been dormant since 2010, when Photobucket watermarked 10 years of all my uploaded photos and projects, before demanding money to remove the watermarks: a fate which befell all their users.
So after that I stopped religiously uploading my process photos onto the internet, but I’ve still been collecting photos of mine and other people’s graffiti and artwork using a traditional camera since 2003. 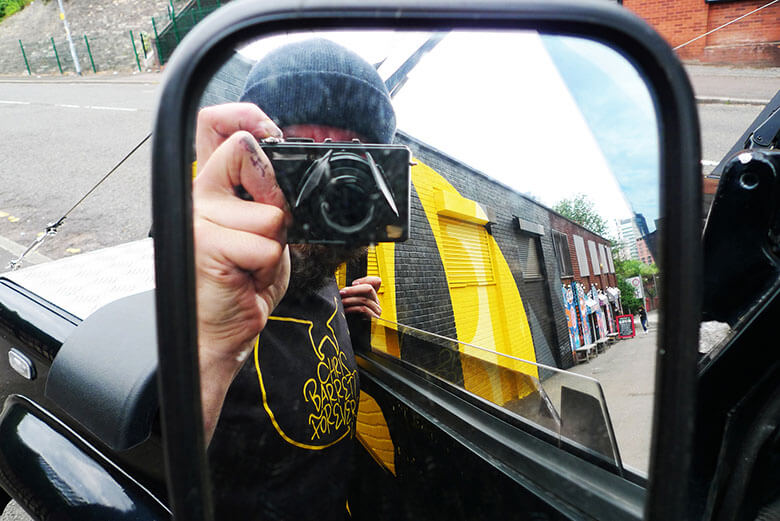 Suspect Package is the official Montana Colors distributor in Manchester, UK. The new shop will be available to visit very soon. Watch this space!