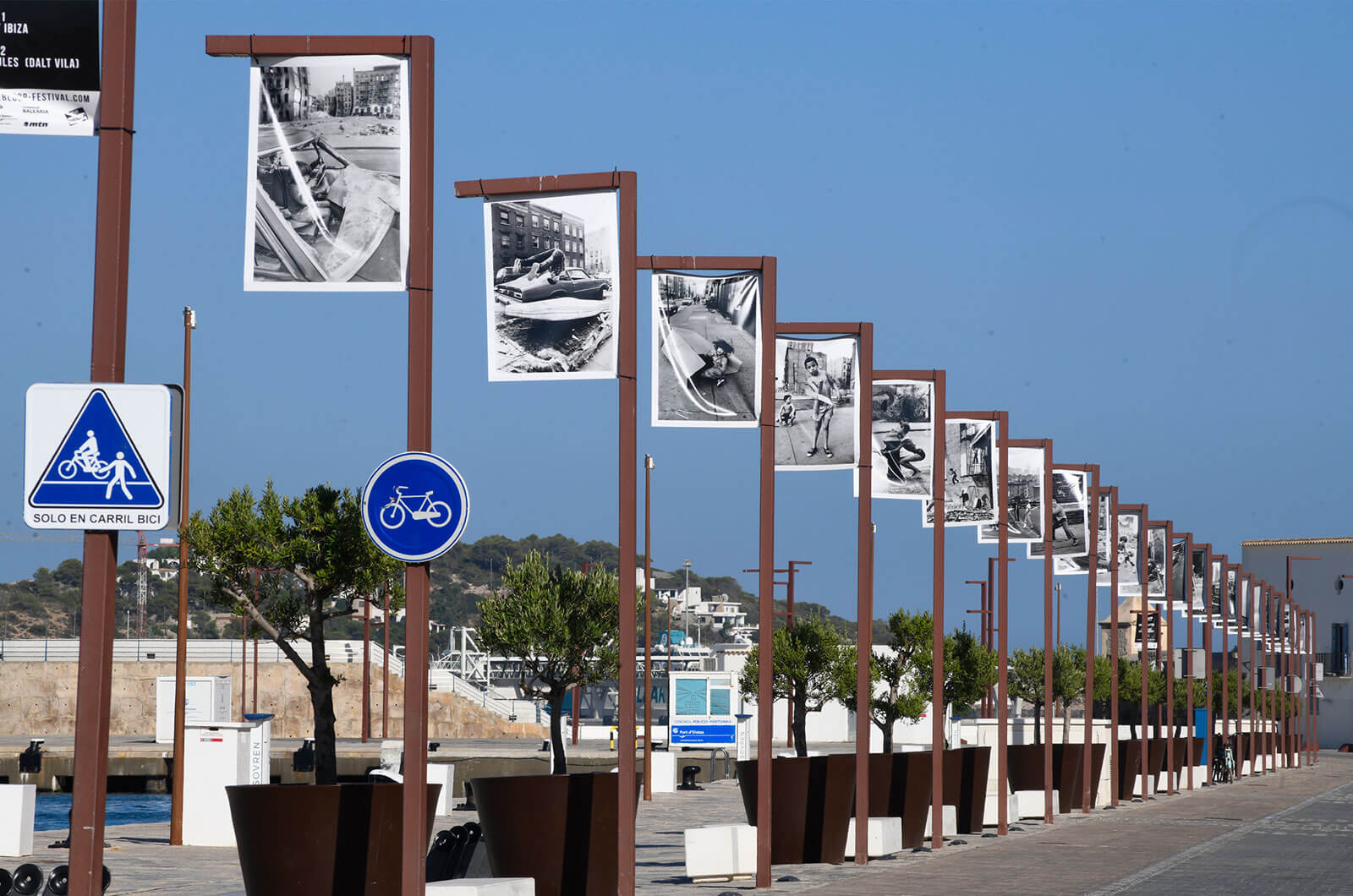 The pioneering graffiti photographer Martha Cooper was in Ibiza this month to promote a fresh look at her Street Play series.
Martha Cooper is a name recognized worldwide for her contribution to the popularization of graffiti and hip-hop culture through her seminal works “Subway Art,” “R.I.P.: New York Spraycan Memorials” and “The Hip Hop Files.”
However, she cut her teeth at the National Geographic and New York Post as a photojournalist, which led her to document the life and leisure time of kids in New York City, eventually leading to the release of “Street Play. From Here To Fame” in 2006. It is precisely this series of images that have been included in this years’ edition of Bloop Festival in Ibiza.
Having bumped into Martha in the streets of Sant Antoni, we were able to talk to the legendary photographer about the festival, the reality behind Street Play and get a couple of tips for aspiring artists.

It was great to welcome you back to Europe for the occasion of the Bloop Festival. How did you enjoy your time in Ibiza?
Ibiza was very enjoyable. I love New York but it was lovely to spend a few days on a beautiful island. I was able to see more of Ibiza than I had when I was there in 2012. 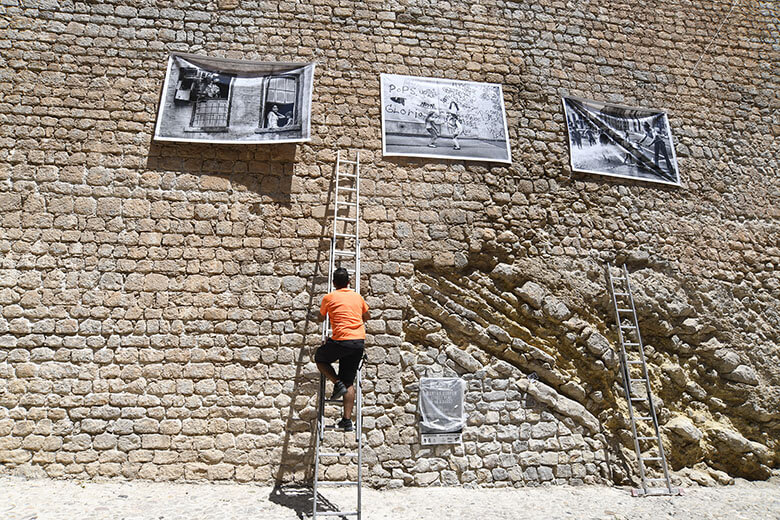 The presentation of your work at the festival has almost crossed over into the realm of street art, with your pictures hung from lamp posts and attached to exterior walls. What was your impression of this unusual approach?
I like the idea that people can look at the photos as they’re walking along. Like graffiti and street art, you don’t have to go inside a gallery to see it. It’s a free exhibit for everyone. 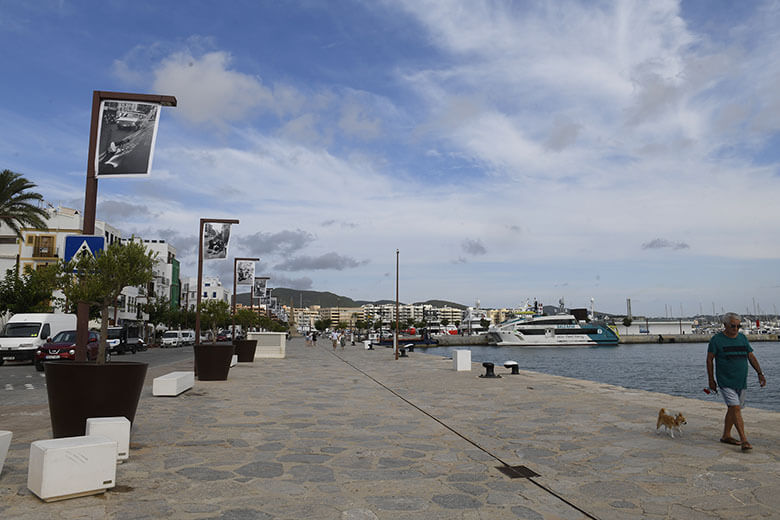 ‘I like the idea that people can look at the photos as they’re walking along. Like graffiti and street art, you don’t have to go inside a gallery to see it. It’s a free exhibit for everyone.’

The photos that you exhibited were from the 2006 book, Street Play. Why did you want to revisit that collection of pictures?
Street Play was published in 2006 but the photos are from 1978-79. There were practical and aesthetic reasons for choosing these photos. Aesthetically, I thought the black and white photos would stand out better than color against the vibrant Ibiza landscape.
More importantly, the layout required 24 verticals for the light poles and most of my graffiti photos are horizontal. Street Play is my all-time favorite series and the subject matter lent itself to an outdoor exhibit so I saw this as a great opportunity to show this work. 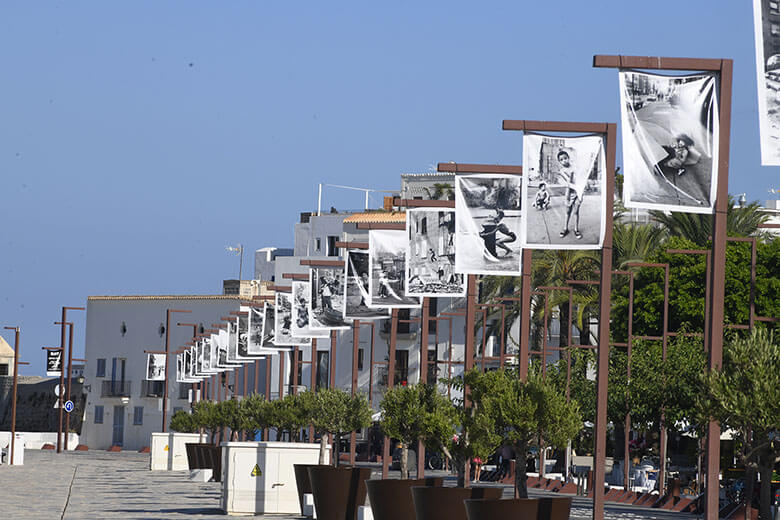 The city you portray in the images seems like a desperate place, life must have been awfully tough in some respects. The kids, however, seem to make the most of the limited resources they have to occupy themselves. And we can’t forget that hip-hop and graffiti emerged from that very context. Were you aware of a cultural shift happening at the time?
To an outsider’s eyes, the landscape looked forbidding but the kids who lived there were given a lot of freedom to explore and create. At the time I shot the Street Play and graffiti photos, I thought I was documenting a very local scene. I was not aware of a cultural shift until a few years later. 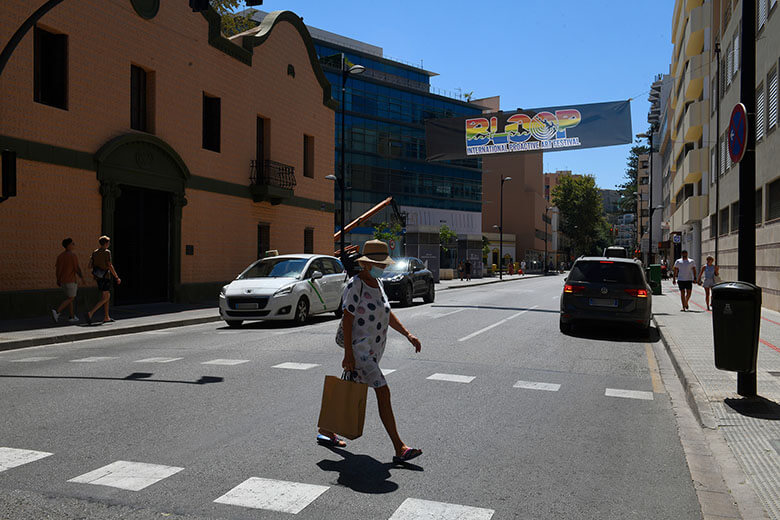 Of course, our community knows you best as the co-author of Subway Art, a seminal document in the history of style writing and graffiti. Part of the appeal of the book is the chance to see the faces and fashions of the artists responsible for the masterpieces. Do you think that graffiti has more value if it can be associated with a human?
More value to whom? Other writers or the general public? I can only speak for myself. I like to know who has painted the art that I photograph and how. That’s why I primarily like to document artists at work. 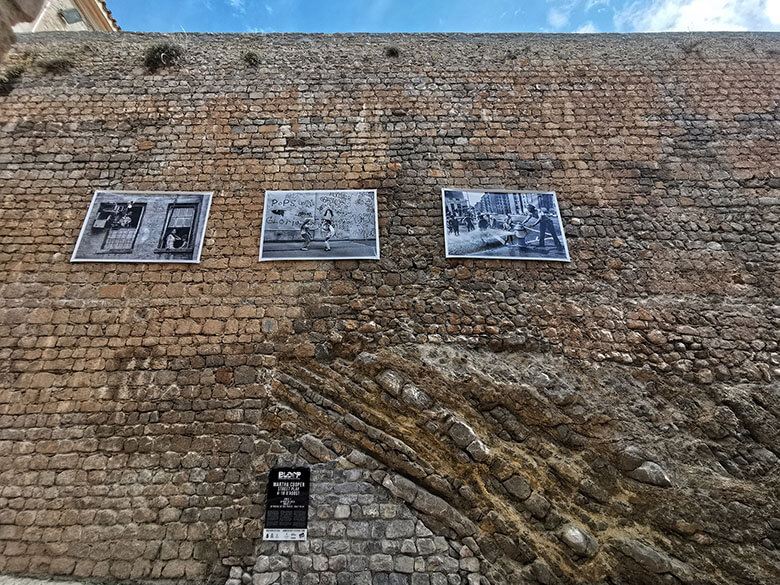 Most photographs of graffiti are taken by writers themselves, especially train pieces that are likely to be cleaned quickly after they are painted. What would be your advice to writers wanting to best document their graffiti for years to come?
Now that everyone has cameras, most writers have become excellent photographers. However, if they haven’t, I would recommend teaming up with a professional photographer who is interested in graffiti. Trying to catch painted trains running takes patience and perseverance. Getting a good photo is the reward for the many disappointing hours spent waiting for trains that never come. 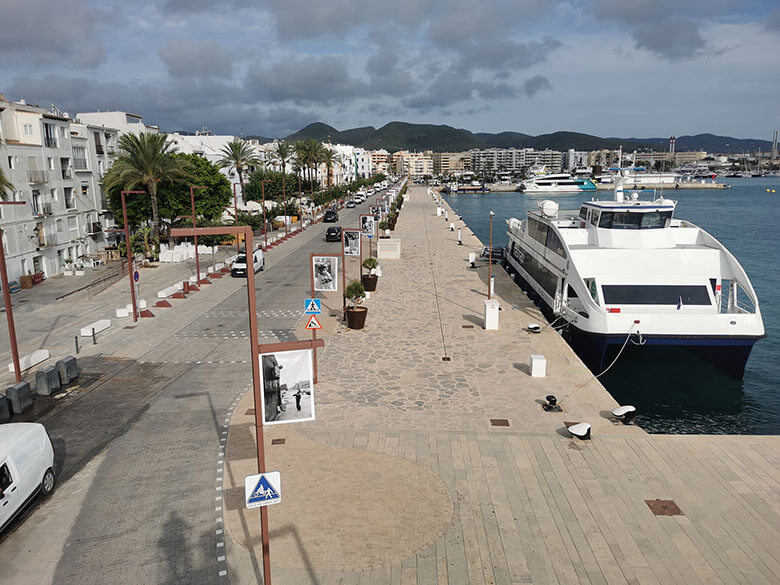 Unfortunately, the graffiti community is still some way from parity. Do you think we have an obligation to promote the work of female writers over male ones, regardless of their artistic output?
I would like to think you promote artists equally based on their work. But I would also hope that you pay special attention to the many excellent female artists who have probably had a more difficult time getting recognized. 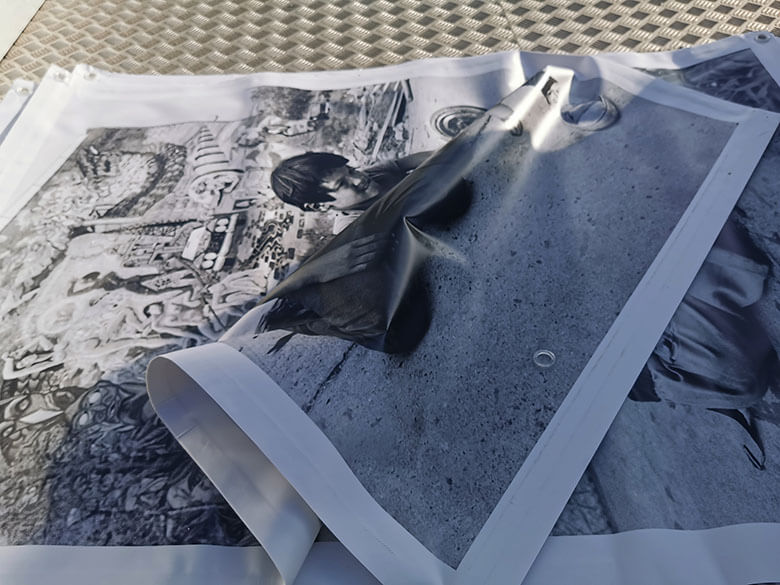 Both photographers and graffiti writers have a problem with unauthorized use of their work, thanks to the rapid dissemination that the web and social media facilitate. How can artists best protect their intellectual property? Perhaps NFTs are a possible solution.
Honestly I don’t really get the NFT thing. But then I never thought that digital photography would catch on. I don’t have any good answers to this question as I am always having problems with unauthorized use and haven’t found any good solutions.

Are there any young photographers that you follow, who we should be keeping an eye on?
Miranda Barnes and Devin Allen. 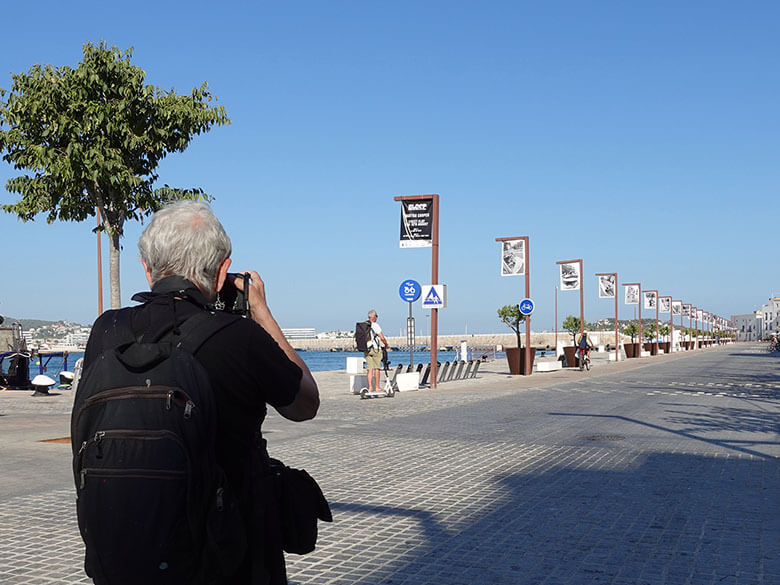 We understand you have a new book coming out soon…
Yes – Roger Gastman waded through hundreds of boxes of unpublished photos and put together a big book. It’s called Spray Nation, all graffiti photos from the 1980s. It should be out by the end of the year. 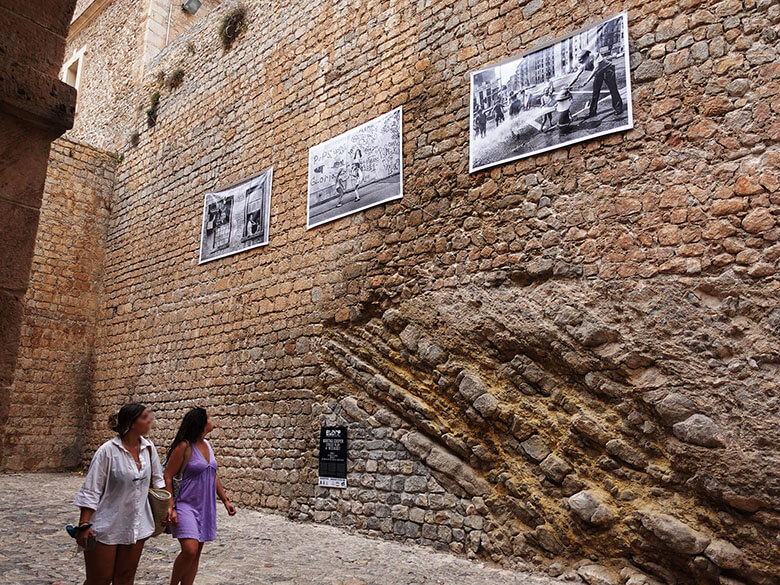 Photos from Street Play are on show at the Bloop Festival until 18 August at two locations on the island: The Port of Ibiza and El Portal de Ses Taules (Dalt Vila).
Check out more content related to photography in graffiti using the hashtag #mtnphotographymonth.