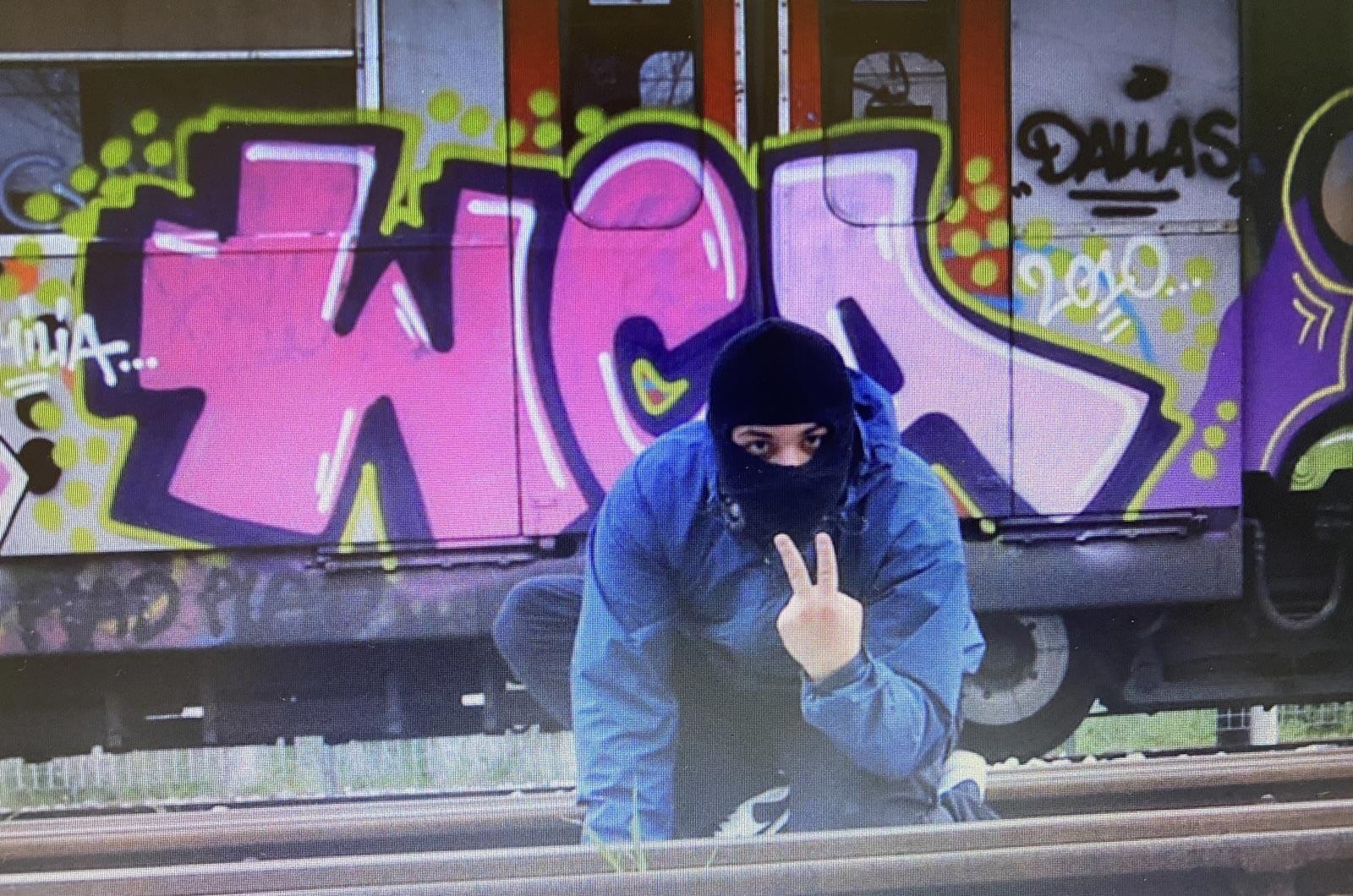 The Instagram account dedicated to the work of Pluto, a Neapolitan train writer who has been in prison for almost ten years, has recently been hacked. The admin of this new account has had to start again from scratch.

To help add to the archives related to this writer we’ve recovered an interview that our close friends from GOODFELLAS MAGAZINE carried out for their sixth issue, which was never published. Although the interview dates from 2016, it’s still a fascinating read that will help to detail and clarify the incredible tale of Pluto WCA HDUE.

To Alberto and Pol. Hi guys, I wanted to thank you for the idea you had of interviewing a writer in jail, I think that in the history of graffiti, facts like there have never been verified. YOU ARE THE FIRST.
I hope, first of all, that you can understand the interview in Italian because I don’t write very well in English, forgive me!
I wanted to tell you that I have always appreciated your magazine and even sold it in my GRAFFITI SHOP, congratulations.
It’s a pity not to have photos of my graffiti, since my computers were confiscated before I was locked up and I had all the material there. I hope these words are good enough for your article, although I think people are more interested in seeing how I paint now and are curious to know something more about a well-known writer who is in jail, don’t you think?
I hope you agree and that you can sell many more magazines.
I’m also inclosing a recent photo of me that you can publish if you want.
When the magazine is ready I’d like to receive a copy if possible, and know if people liked it and what they think.
I send you my regards. Do not hesitate to write to me for anything, I’ll be at your disposal.
Ciao. Thanks. Ciro Pluto.” 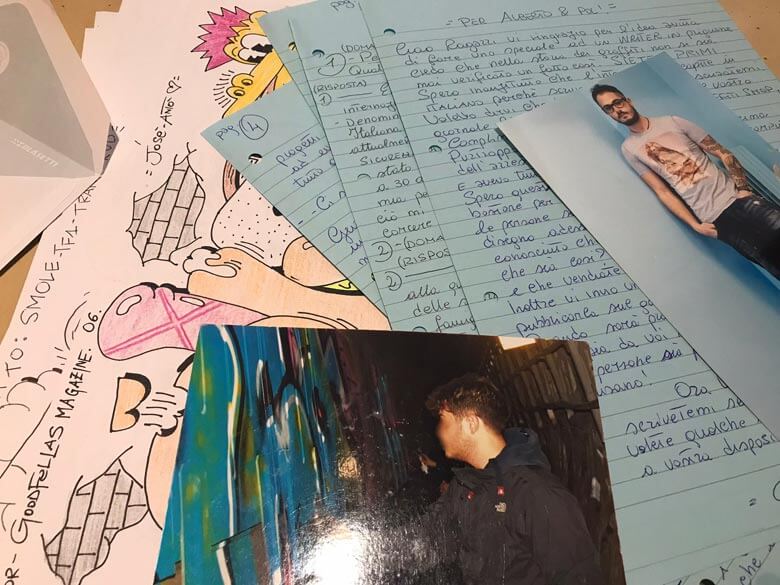 “I was jailed on February 26, 2012 for international drug trafficking, as head and promoter of a group called Camorra, and double attempted murder.”

How long have you been in jail for, and why?
I was jailed on February 26, 2012 for international drug trafficking, as head and promoter of a group called Camorra, and double attempted murder. Italian law accused me of many absurd things that are not true. I’ve currently been held in the maximum security prison in Parma almost five years straight. I was found guilty and initially sentenced to 30 years in jail, but on appeal my sentence was reduced to 14 years.
All of this has changed my life incredibly because jail makes you look inside yourself and really understand who you are.

What do you miss the most about life on the outside?
In jail, you quickly realize who the people you really love are. As soon as they put me behind bars I began to miss my family, my children and all my friends that I’ve always held dear to my heart, especially because they are still by my side. 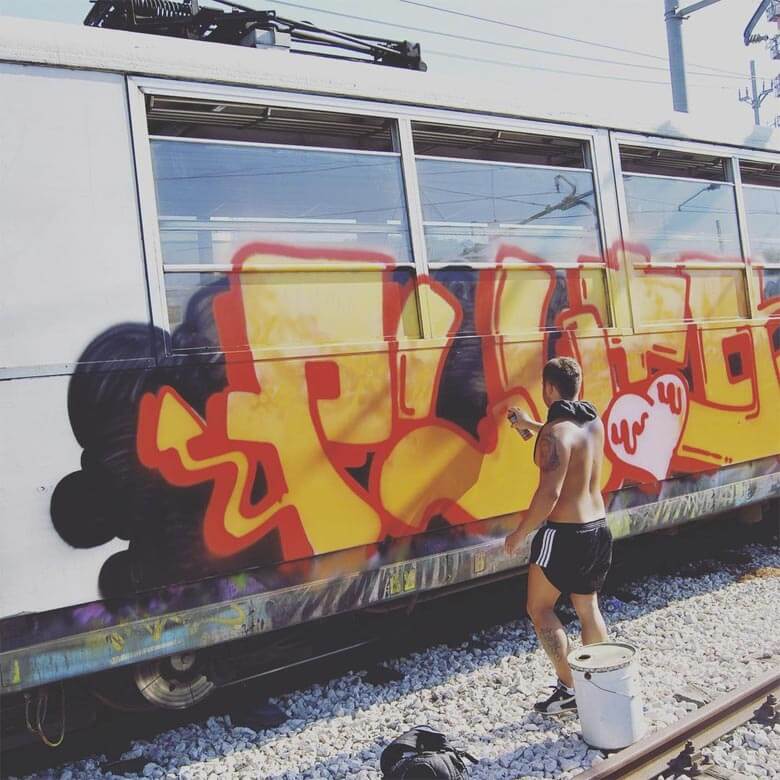 And the graffiti?
Graffiti? Haha, good question! Graffiti was, and is, everything!
I’ve been dreaming of walking through subway tunnels for five years, I can smell the tracks and metal and hear the noise of the cans that I miss so much. Thanks to graffiti I’ve been able to discover new things, places, people and cultures.
I started painting when I was only 11 years old, now I am 27, so imagine the nostalgia I can feel.

“It’s been very important to have a crew like WCAS-HDUE as brothers, who’ve written a lot to me and dedicated many pieces to me all over Europe.”

Have you received support from graffiti writers?
Of course! There have been many writers and friends who have supported me over the last five years. I’d like to give a special thanks to Timo1, a friend from Nottingham who has been there for  me and wrote me several letters.
It’s been very important to have a crew like WCAS-HDUE as brothers, who’ve written a lot to me and dedicated many pieces to me all over Europe: Stockholm, Brussels, London, Nottingham, Paris, Barcelona, ​​Madrid (Keral), Bucharest, Catania, Milano, Roma and so on. I’ve also found out that they created a Facebook page called “Free Pluto.” I don’t know who it was but I would like to thank you personally.

I would like to take this opportunity to shout out some homies! Big shout out to my Naples Crew (HDUE), my dear friends (LEPRE-FOLLE), Opium WB, Keral, Zaher, Trane, Zoe, Smole, Rare, Afiler, Rud, Siko, Acne, Caps, Vins, Snow, Rok, Sorcek , Dins, Moar, Bambus, Mser, Cora, Hoze, Xno, DIAS Crew, TSK and everyone who has done PLUTO pieces in my honor.
THANK YOU ALL. See you soon. “I’M STRONG.”

Have you been able to work on your style in prison?
Yes, I think my style at the moment has improved and changed a lot because here we’re very isolated and we we’re not up on what’s happening outside, I bet a lot of things have changed. Personally, I’ve worked a lot on the basis of my lettering. I draw a lot during the day, now my style is closer to the world of Disney comics, which I read as a child and I continue to read. In prison I’ve learned to love the art of graffiti, but above all art in general. I’ve read a lot! 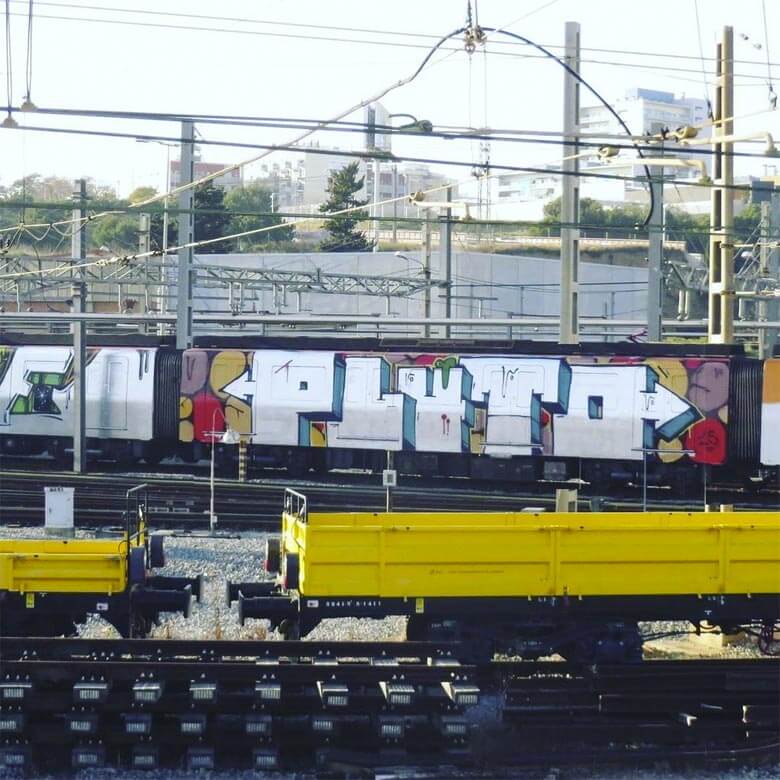 What’s the routine like?
Prison makes you a mechanical person, a robot programmed to always do the same things, such as two hours in the yard, school, and various courses such as theater, computer science and painting, on alternate days.
I don’t watch much television because I think it is a source of temptation, but sometimes my roommate watches it and the only thing they talk about is politics, the outside and talk shows. I hate seeing and hearing all those things that, from my point of view, give the wrong messages to us and especially to our children, our future.

What are your hobbies?
Twice a week I go to a gym with all the machines to keep in shape, hahaha! I’m trying to be fit by the time I’m free, you know?
But what occupies my time the most is painting! I paint every day with acrylic paint on huge canvases. In the last three years I have dedicated a lot of energy to canvases with brushes and a lot of paint paid out of my own pocket.
I tell you that these days an exhibition of mine is being held in Tuscany (Massa-Carrara), a solo show with 35 works on canvas and cardboard. I’ve sold three canvases to the curator of the expo at a very good price!

Is there room for graffiti in prison?
Haha, I wish! No, there’s no room for graffiti, but personally I’ve done pieces in four different prisons (Salerno, Taranto, Saluzzo and Parma) with the authorization of the management. You have to know that for them, graffiti inside a prison is something new, and when I presented mine they were very happy. That’s how I started to evolve and progress within prison barriers, all thanks to myself and graffiti.

One man wholecar at Naples’ subway 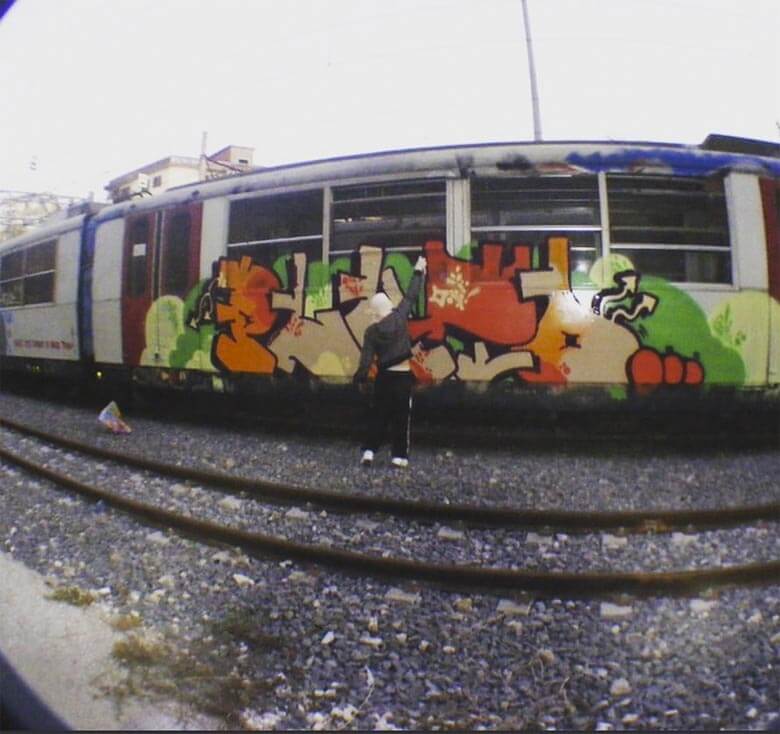 “I’m accused of belonging to the Camorra Mafia (…) and no one knows anything about graffiti.”

Have you met any writers in jail?
You know what? In five years I haven’t met a single one, even though I’ve gone through eight different prisons. But check this out: since I’m accused of belonging to the Camorra Mafia, I’m not with normal prisoners, but with people who are supposedly part of criminal organizations or clans, and no one knows anything about graffiti.

What do the rest of the prisoners think about the graffiti?
Everyone who saw me paint with a spray can in the corridors of the center were surprised at the ability I had, amazed even. For all of them, it’s something new, and I have to say that there hasn’t been anyone who’s discriminated against my work or graffiti in general. In fact I’ve always felt great support. 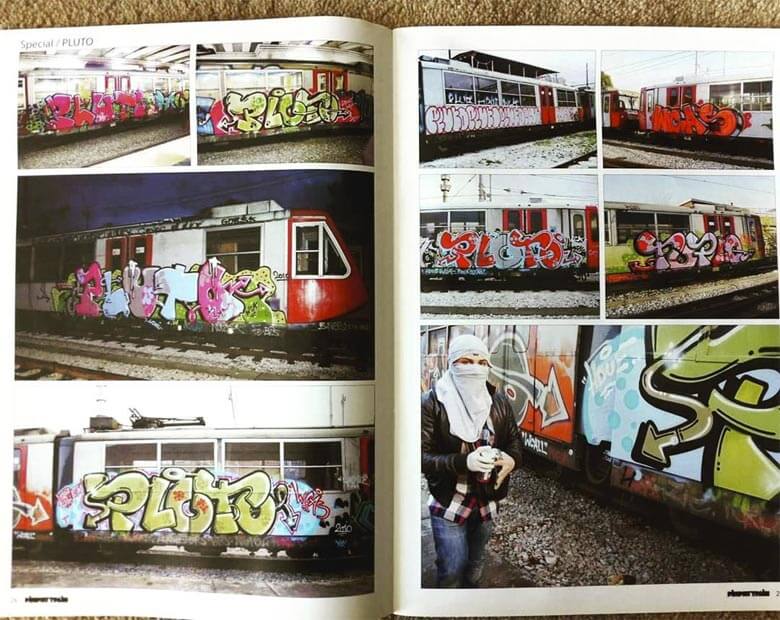 What percentage of your criminal activity was occupied by graffiti?
Hahaha what type of question is that?! Zero percent.
Graffiti is part of me, I had friends who hung out with me because I was “PLUTO” and others who were my friends because they had a lot of money, but graffiti had nothing to do with my criminal life.

“when I was locked up I had all the images, recordings and more on three different computers that were taken from me.”

Can you follow graffiti from prison?
Unfortunately not!
I don’t have any information about the current scene, I don’t have any magazines or the internet. I’ve got no idea who the new writers are and what the old ones are doing. It’s really a tragedy for me because I’ve always been very interested to know how things are going, and today they have taken all this from me.
I would very much like to know how things are going, and especially in Naples, a city that I have mastered every day with new pieces, almost 90 whole cars, 20 whole trains and around 900 train and subway panels over 10 years.

A very sad thing for me, was when I was locked up I had all the images, recordings and more on three different computers that were taken from me. So I don’t have a single photo of all my work, apart from the photos that are on the internet, some just before I came to jail.

Pluto is currently serving his sentence in the Floridia prison in the Italian province of Syracuse. Everything seems to indicate that he will be released earlier than announced in this interview.
If you have photos of Pluto pieces, feel free to contact the @pluto_official_page Instagram account or share them on on the platform using the hashtag #freepluto. 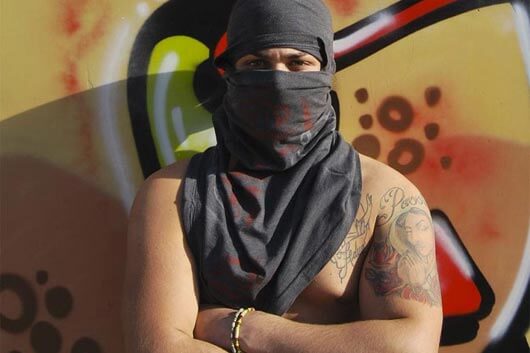