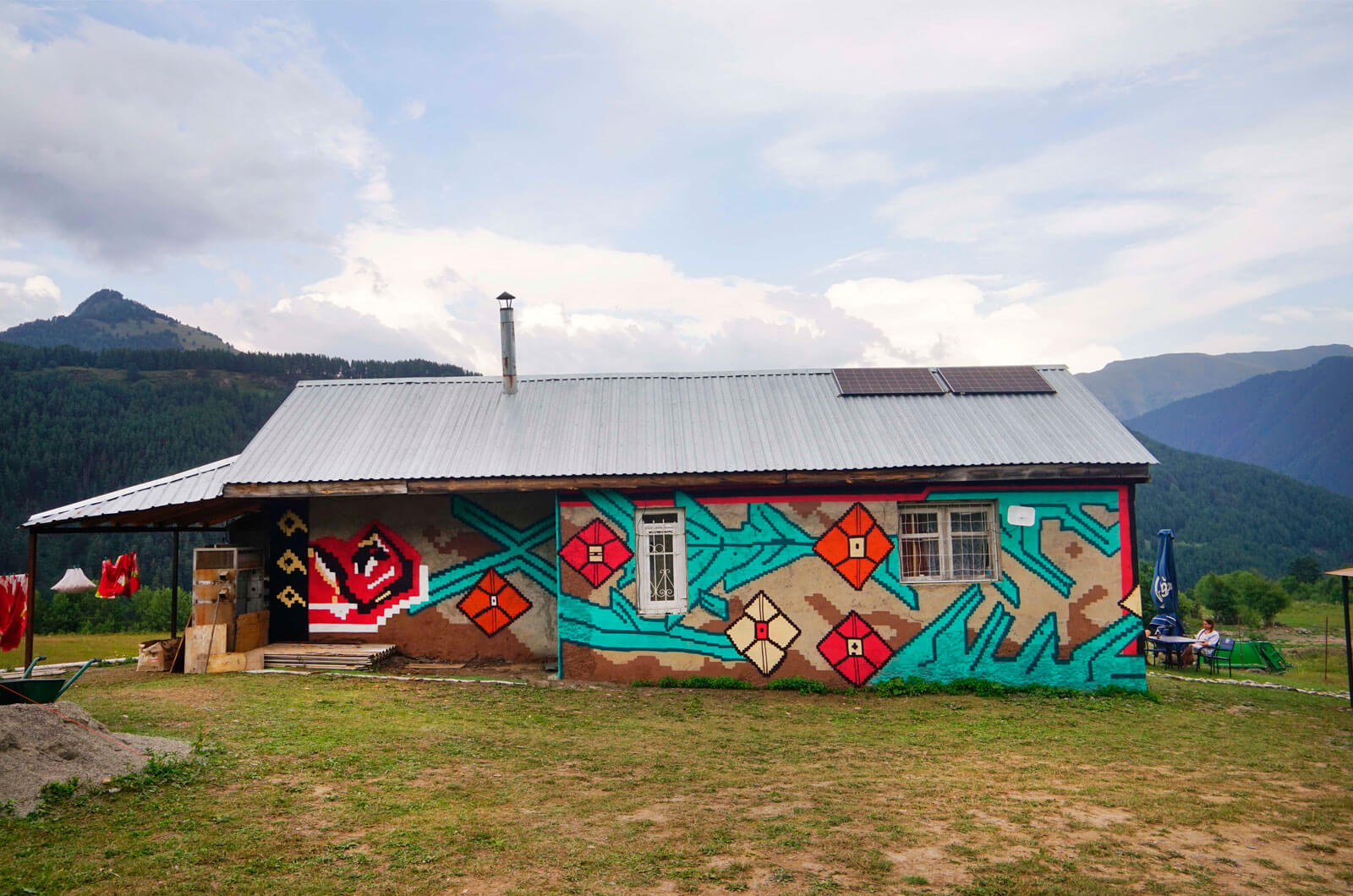 Mishiko Sulakauri writes us a letter from his experience in Tusheti, in the Caucasian Mountains, where he, Bacha Khoperia and Saba Chilindrishvili painted the highest murals in Georgia.
It might surprise you to know that Georgia has a small but dedicated graffiti art scene, mostly centred around its capital Tbilisi. But aerosol art can have many more applications outside cities and other urban settings, as this report from Tusheti goes to show.
The murals painted in Omalo were possible thanks to AqTusetti and Mtn Colors.

The artist Mishiko Sulakauri wrote this letter to recount his time painting folk symbology and offering stick and poke tattoos near the highest point in the country. 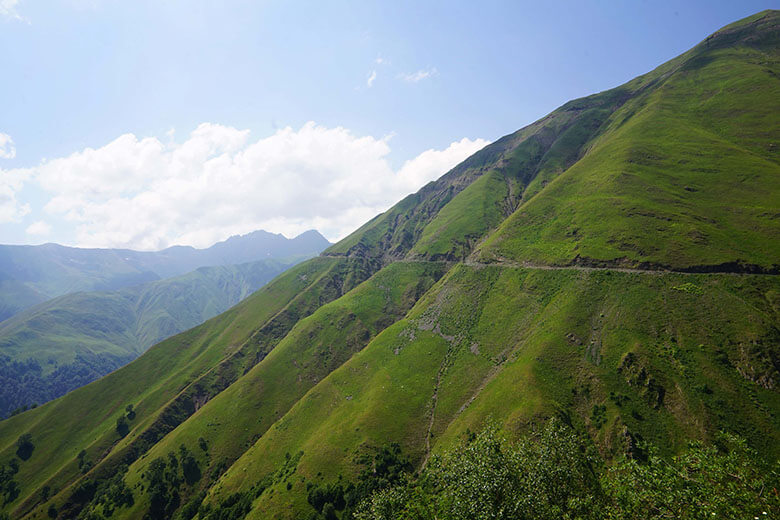 “Hey guys,
I will try to tell some stories about our trip to Tusheti, Georgia.
Tusheti is a high mountainous region of Georgia, to get there you need to take one of the most dangerous roads in the world. Actually, every year people die there, which makes Tusheti even more mystical I guess. Omalo is the biggest village in Tusheti, 1800m above sea level, and has the best infrastructure, as other villages don’t even have electricity.
Tahitian architecture is unique, built only with rocks. Walking there you find houses, castles, and fortresses from the 16 or 17th century, maybe before. As Omalo is the central village, is the only one where you can build with concrete, which seems out of context on the landscape of Tusheti. So our main aim and inspiration was to clean up the concrete textures and give them the new, Tushetian air. 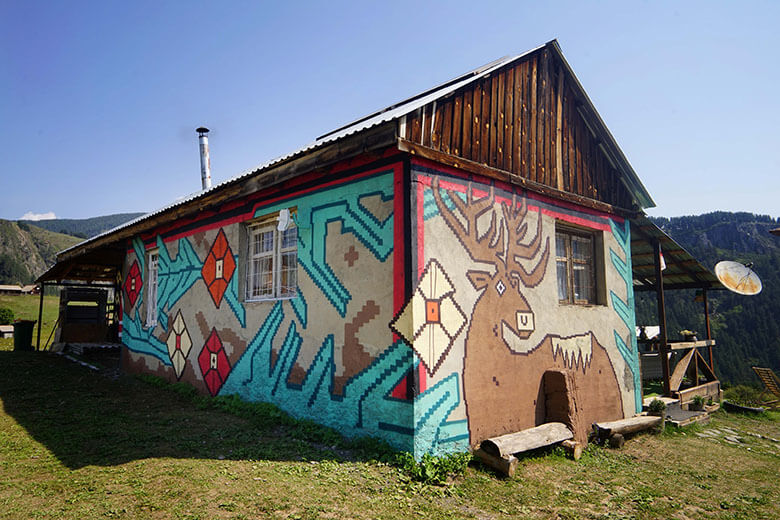 The first piece from the video was inspired by a house owner’s carpet, embroidered by his great-grandmother, a really long time ago. When Georgia opened its borders to Turkey in the 80’s he tried to sell it there, but he couldn’t get the money he wanted. He mentions that someone offered him $150, that was quite a lot of money in Georgia back then, considering you could buy a flat for $200. Crazy.
So we really respected the design of carpet itself and tried to create an artwork based on the carpet’s details. 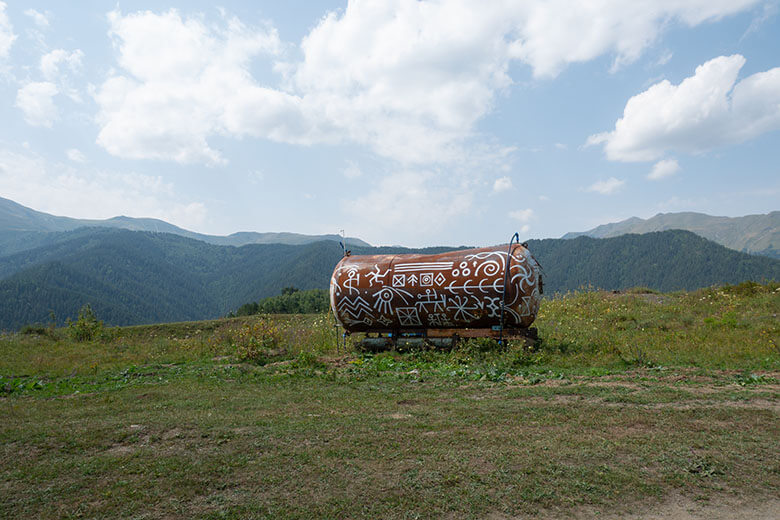 Tusheti is always a blast as the feasts never end. They have a long tradition of brewing beer as a sacred drink. Tushetians had their own mythology and religious system. Ancient pictograms and symbols are found on fortresses, sacred places, and houses for religious and astrological reasons. As we researched the symbols, we got the insight to transform them into modern language.
Before they were scratched into surfaces, so we tried to paint them using a minimalistic technique. All the surfaces and textures are very important to us, as they tell stories through the ages, so we decided to avoid using background. For instance, we didn’t paint over the texture and color of one of the water tanks we painted with Tushetian pictograms. 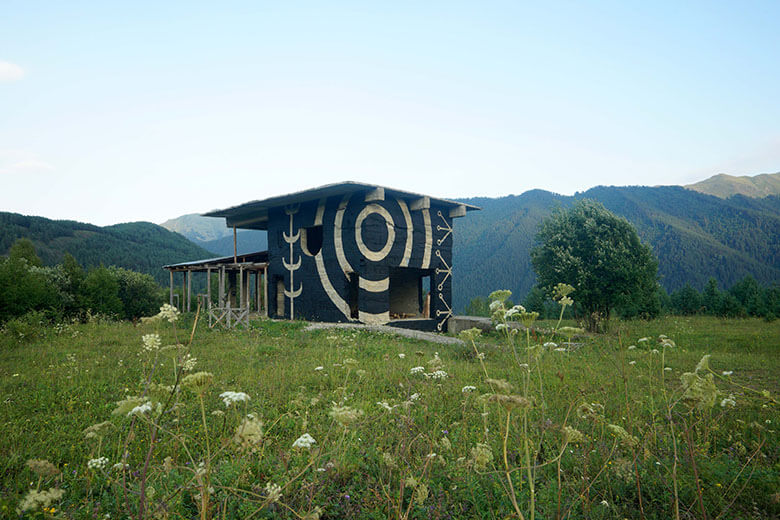 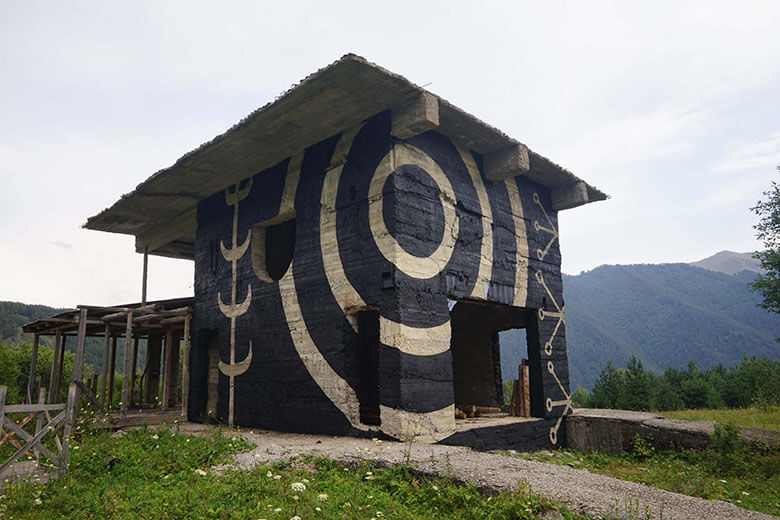 Bacha did tattoos for everyone there, that was fun! The ancient symbols became part of people’s bodies forever.
As a way to give thanks to the God of the Sun, the last piece on the video is an astrological painting. The building was supposed to link with another village in the Soviet Union, but as Union fell and they could not finish it. As a huge abandoned construction can be seen from two neighboring villages, and we tried to create one big image on it. The Tushetians called it “The Eye of Tusheti.”
This mission was very important to us, as we were able to paint the highest mural in Georgia above sea level. We were hosted by the “AqTusetii” residency, real guys doing real things there for the region. Montana Colors provided the perfect paints, which performed really well.

Check out an interview with Artileria Graffiti Shop, our MTN Dealer in Georgia, here.