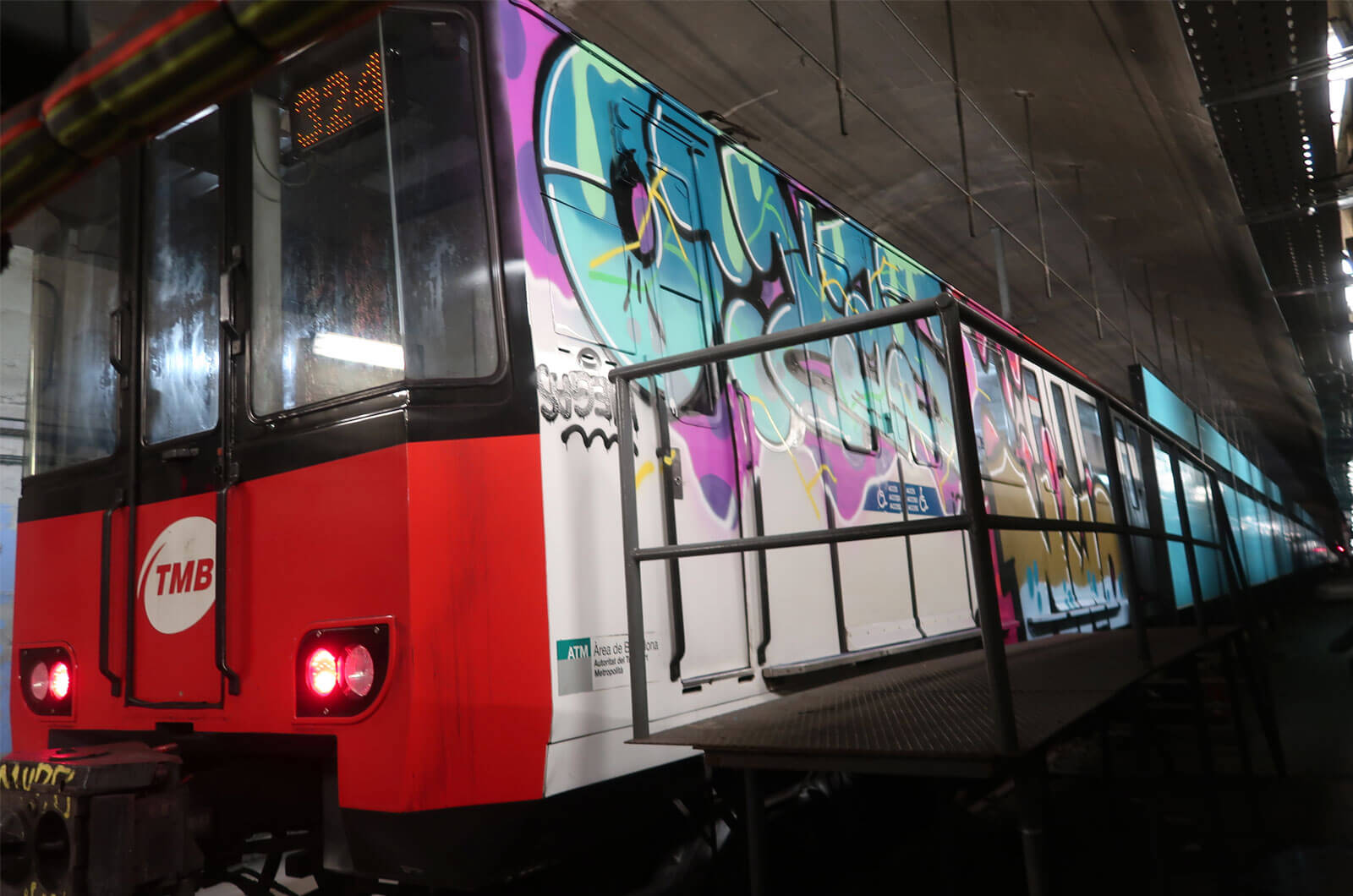 MTN World catches up with one of Barcelona’s most celebrated imports, the versatile vandal on vacation known as Serio EHC.
One of the most active writers in the city, Serio applies his comic letters and characters to virtually every surface available. After he took us up Montjuïc to paint and take a dip in the Olympic Pool earlier in the month, we wanted to find out how he kept a balance between keeping it carefree and the meticulous planning he puts into his missions in his adopted city.

Many have tried it, but few with as much success as you. What’s it like to be a vandal on vacation in Barcelona?
Amazing. Can’t stop lovin’ the lifestyle and Barcelona is definitely the place to be for having a Sprayvacations lifestyle. This city has it all; from good metro models, s-trains, food, babes, sun and the beach!
I always try to make the most out of the day and appreciate where I’m living; I never take the situation or an opportunity for granted, and there is always something going on in this amazing city. 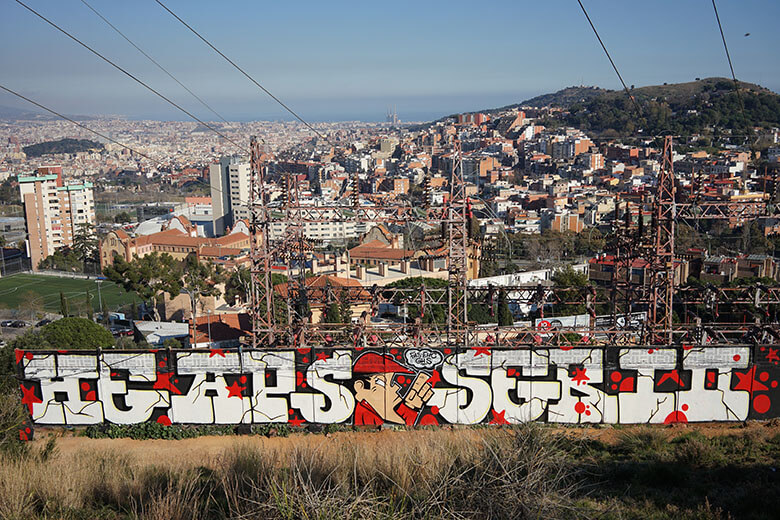 How does Barcelona compare to your home city, from a vandal’s point of view?
I’m from the North where the cold, long winters freeze your fingers and where the sun never rests in the summer: Stockholm, Sweden. Where I come from, things are very different to Barcelona, especially when it comes to people and mentality.
Stockholm has, and will always be, a different proposition from a vandal’s point of view, everything needs to be handled with care and caution. Sneaky and discreet is the way to do it there.
People don’t accept graffiti at all, and you can end up in a lot of trouble by just doing a tag in public. We do also have a very clean city since the government has always tried to have a 24 hour cleaning policy, and they are pretty good at it. It’s a more structured way of handling your missions, even if it’s painting trains or just bombing the streets, you need to be on top of your game to last long in the Stockholm scene.

‘I grew up watching the crazy Spanish approach, where rocks were thrown and screaming writers run around, coming through with fat caps and metal bars. This, of course, makes you think everyone is crazy down here.’ 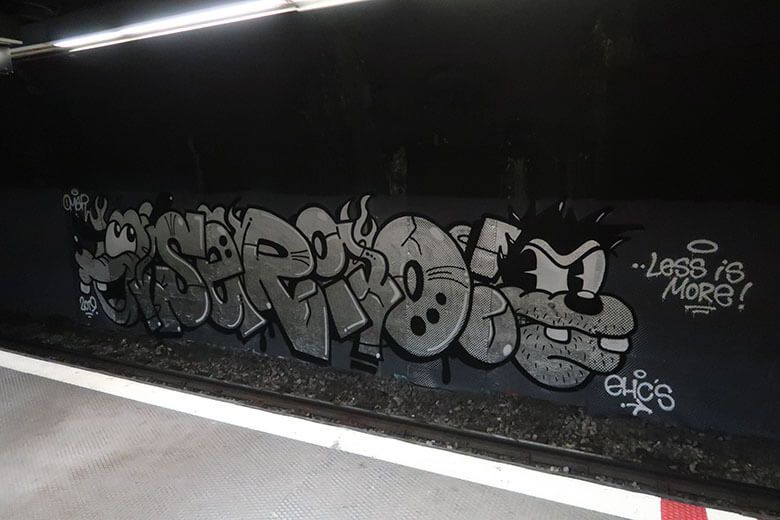 It took me a very long time to adjust to the way you paint in Barcelona, both streets and trains, since I saw that you interact very often with people, security and workers. As far as I can see, graffiti in Barcelona isn’t viewed as such a serious crime as it is in Sweden and this makes people’s thoughts and reactions different.
I grew up watching the crazy Spanish approach, where rocks were thrown and screaming writers run around, coming through with fat caps and metal bars. This, of course, makes you think everyone is crazy down here. But then I found out pretty quickly that there is also a sneaky way and certain groups of people here that handle it extremely professionally, which I think is the best and most effective way to do it.
One thing that always stood out to me is the way security and writers can interact by just speaking to each other, whether it’s normal security or the vandal squad, there is a thin line of understanding when to intervene or not from both parties. This is something that is very rare to see but that I have personally used several times on missions. 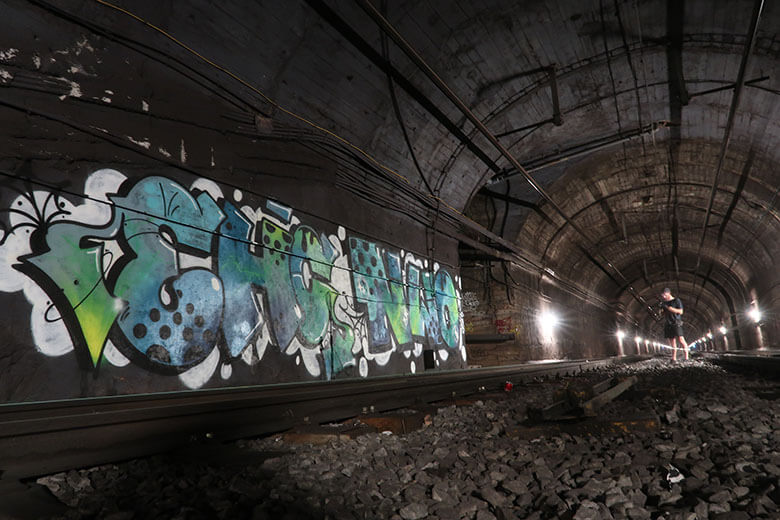 There are plenty of foreigners living in Barcelona, in fact you might not even have to learn Spanish or Catalan to get by. Do you think it’s important to become part of the local writing community? Why?
This city is swarming with tourist writers, or as they call us, “Guiris.” I think it’s important to differentiate a tourist from someone that has lived here for a while. I also think that it’s important to learn the language or at least be able to communicate with the local  writing community.
I think that Barcelona has a pretty rude attitude and unwelcoming point of view when it comes to foreign writers that live here. In my situation, there have been a few conflicts here and there but mostly because of photos being uploaded to Instagram, and also painting spots at a certain time.
But beef will always be part of an active writer’s life, it doesn’t matter if you’re the kindest person in the world, ‘cause if you paint a lot and even with respect for the local writer community, you will step on someone’s toes. I think it really doesn’t matter if you become part of it or not, if you do your thing and get acknowledged in a good or bad way from the community it means that you’re doing something good cause any acknowledgement is good, according to me.
The community will have parts, some will like you and some won’t. That’s the game. But most of us have that little ego in the back of our head and it’s always an acknowledgement to hear from someone that you’re doing something good or bad, I think.
So yes, I think to a certain point it’s good to be a part of the local writing community because you also might inspire the next generation of that local community, even if you’re a tourist. 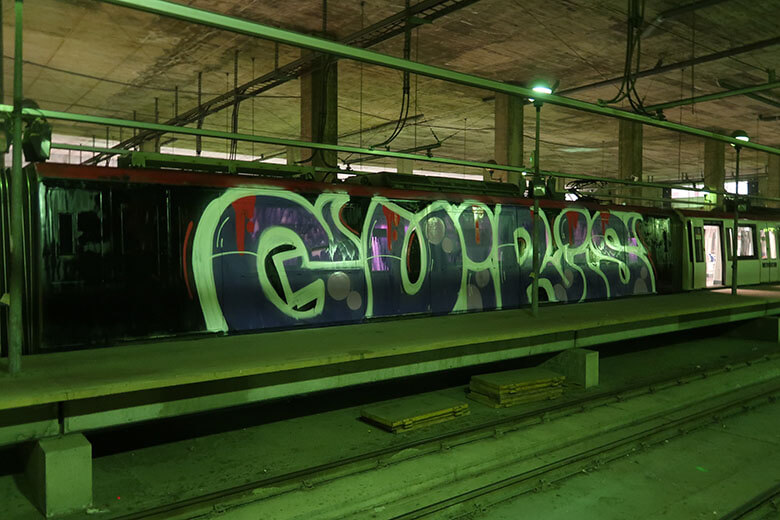 Serio, in Spanish, means “serious” – an adjective that’s at odds with the comic lettering and appealing characters that you paint. Is this contrast deliberate, or do you just like the letters?
Yes. So funnily enough, I picked this name after spending quite some time in Spain. At that point I was back home in Stockholm and I hadn’t painted for 2-3 years. I met some old school friends that were still active so they took me to some Hall of Fame spots and got my addiction going again.
I actually chose the name SERIO cause I felt the opposite of not getting too serious with graffiti again. This was 2010 and I knew exactly what I stood for when I chose it. It ended up being a contradiction: people that know me would definitely agree that I’m always 100% serious about everything to do with graffiti, from preparation to structure, planning, escape routes, colors, discreetness and basically doing a military mission every time. 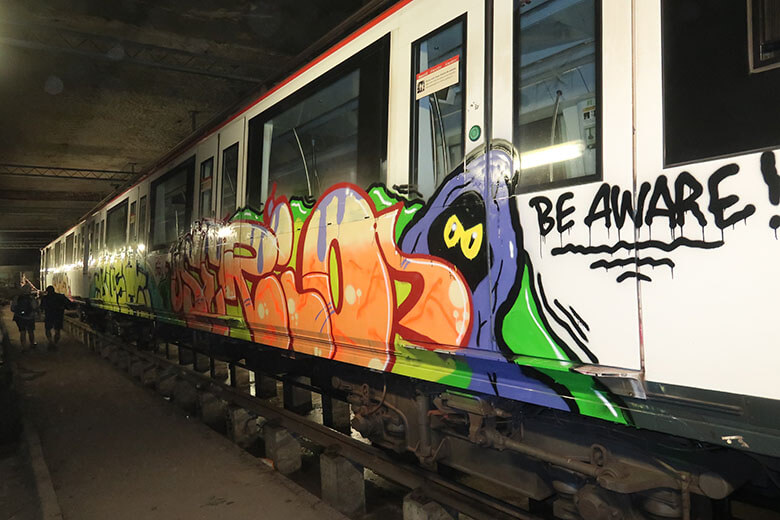 ‘For me the actual train action isn’t the most important part, like the painting, even if I love it of course! But it’s the mission itself, from sitting at home planning something in either your country/city or on foreign soil. It’s amazing that it all can work out in real life.’

You seem to enjoy all aspects of graffiti, from leaving little tags around town to producing whole cars on the subway system. Is there any element that has more importance for you?
Yes! I was raised bombing in the streets of Stockholm and I wasn’t a train writer at all, but I learned the old school way of starting in halls of fame then streets, rooftops, trucks, trackside walls and finally I got to paint my first train in 2011.
I love every aspect of graffiti and everything that surrounds it. I think that the best and most impressive writers are the ones that do everything from tags to walls and trains. All city kings!
I haven’t been in the train game too long, but without a doubt when I got introduced to steel and especially the game of metro/subway painting, I think that it had such a impact on me – and still has to this day – that it’s without a doubt the number one thing to do in graffiti.
For me the actual train action isn’t the most important part, like the painting, even if I love it of course! But it’s the mission itself, from sitting at home planning something in either your country/city or on foreign soil. It’s amazing that it all can work out in real life.
Something that at first was just an idea in your mind is actually like clockwork working. Bypassing security, sensors, cameras and all the other other things before it all works out. There is nothing more satisfying than working hard to paint a Subway model with the right people around you as well as the right tools and mindset.
I started a few years back, in 2016, to really take my time and appreciate the surroundings that me and my friends put ourselves in. That’s when I started to document this very consistently and it has given me a whole new pleasure than just the robotic painting that a lot of people do. All those amazing photos haven’t been seen on the internet and are kept very safe, waiting hopefully to see the light of day in a future book. 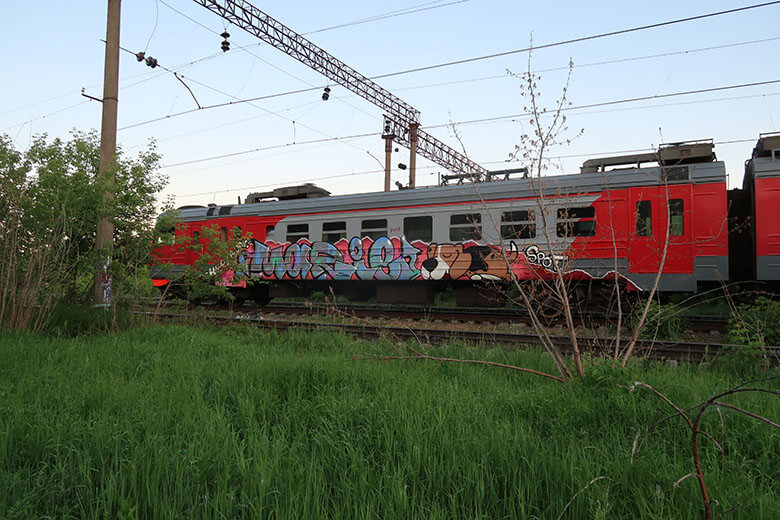 You recently produced an enormous blockbuster collaboration on the wave breakers by the port, visible to visitors flying into El Prat, with the names of the crews EHC, WD and ORG. Can you tell us about that mission?
Actually, there was nothing too special about this action. One day we were looking at the wall and thought, “Damn, with all those planes passing, imagine if we painted big enough for people to see when they fly into Barcelona.” So the plan was made.
It was a so hard to carry all that paint there cause you need to climb so much and we had a lot of bucket paint with us. So me, Wegas and Judo started measuring each letter standing on this shoulder-wide ledge that would hurt you badly or even kill you if you fell down.
Two hours later, we had accomplished a 46 meter long x 6 meter high blockbuster with me almost slipping and falling to my death covered in paint.
It was a hell of a night and next day I went with a good friend and his drone and got amazing footage from the sea of our blockbuster. They normally buff that place but i think they just gave up when they saw the size of that monster 😛 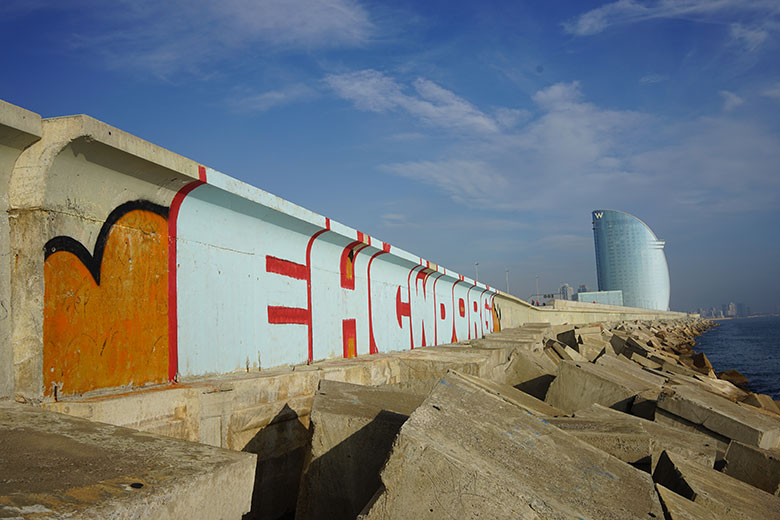 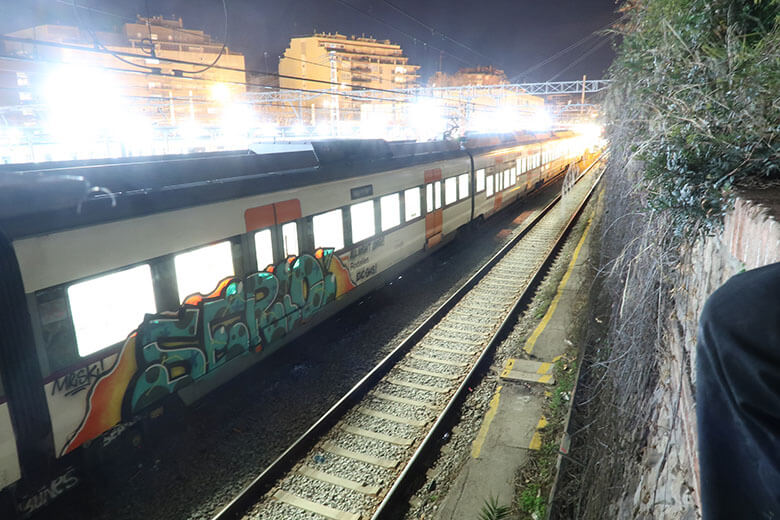 What has been your most memorable vacay day in Barcelona?
Oh, there have been so many good days with so many stories, but I gotta say that when the TMB drivers go on strike, it’s a hell of a lot of fun in the tunnels in Barcelona!
One day that I had last summer was a good mission on the subway in Barcelona where we had to go through five stations in traffic. There were a couple of us and a good friend Errorflict taking amazing photos of it all.
We ended up completing the perfect action in a beautiful spot and returning to the city that night, getting food and drinks and going to the beach having a night swim together. But like I said, I have stories for days about all the amazing times in the tunnels together with good people, and someday maybe they will appear in a book. 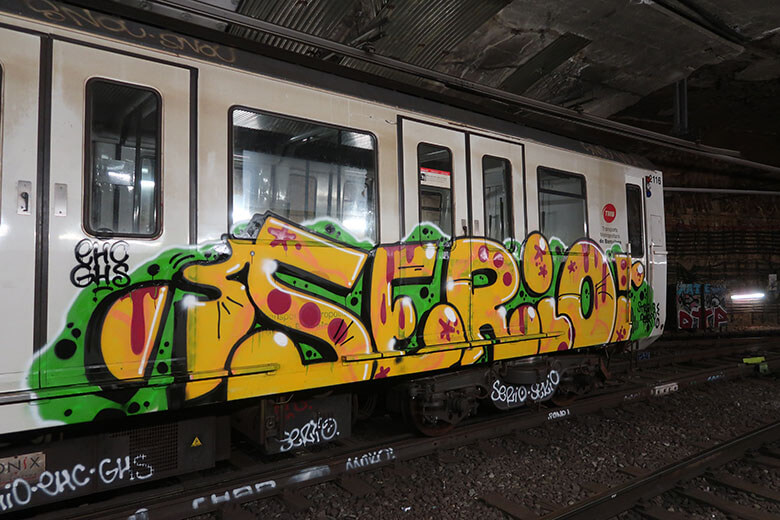 We’ve asked you for an artist’s playlist for our new series for Spotify. Can you sum up the feeling of the tracks that you’ve included?
I’ve put together something around 20 tracks for you guys and it’s the music i grew up with, which its mostly old-school hip-hop. But then there are also a couple of songs that get me real hyped for actions and memorable Interrails, tips with memories that i will never forget so i hope you guys ENJOY!!!
Peace y’all and thank you for the opportunity to share some thoughts. Keep spraying!! 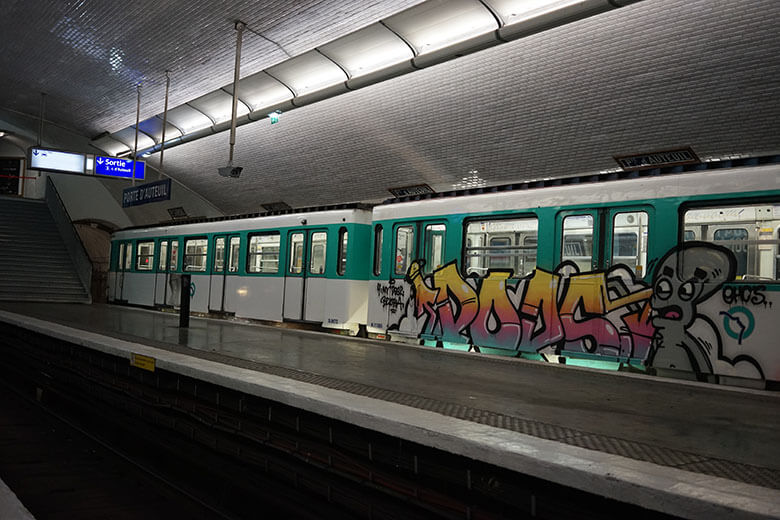