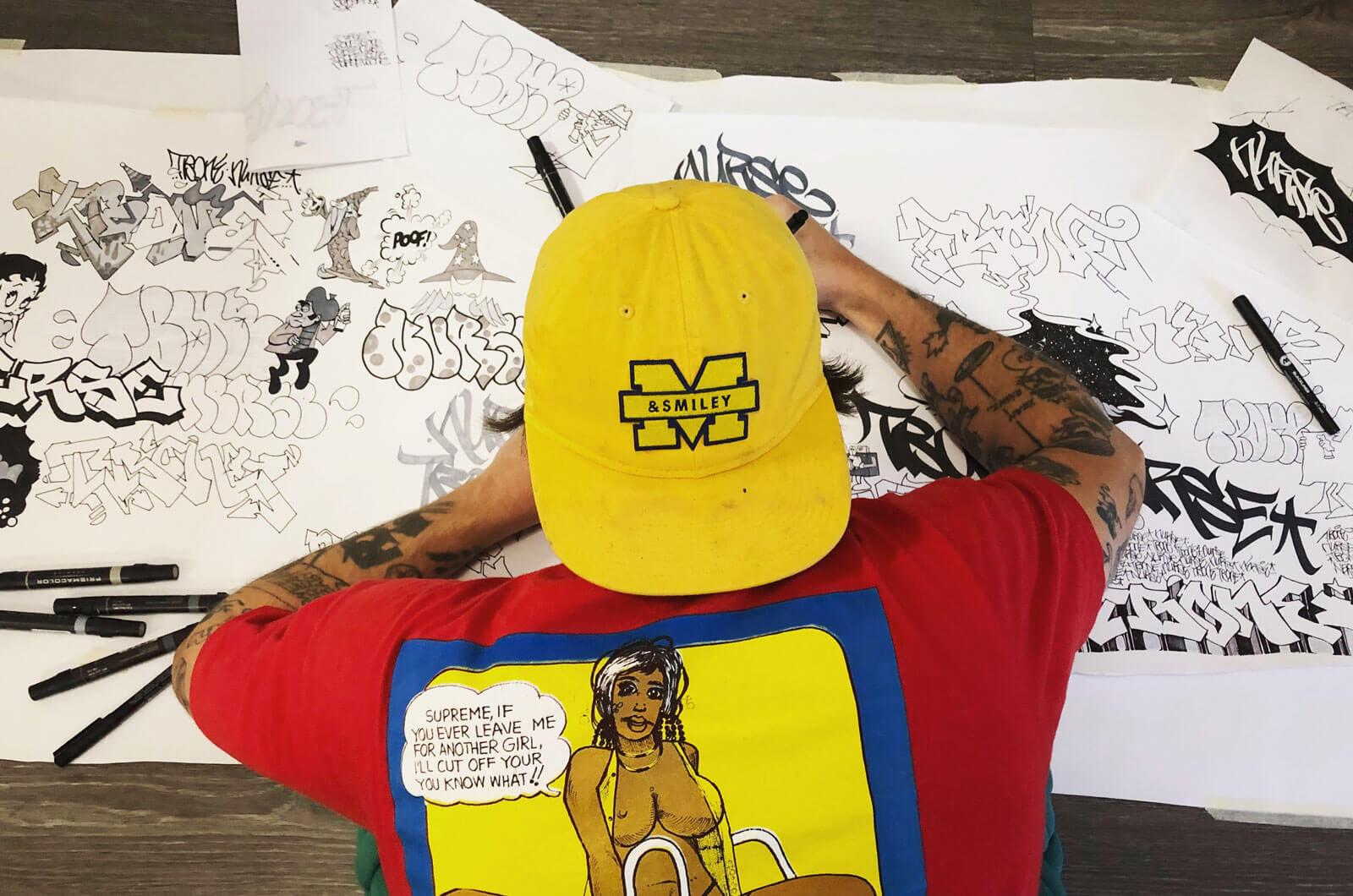 Part illustrator, part consultant and part wizard, Skip Class applies his magical imagination to all sorts of projects – always with a distinct classic graffiti sheen. The San Diego native talks to MTN World about arriving late to graffiti, the mentors that brought him up to speed and the results of taking hallucinogenic substances in the classroom.

How does being a wizard affect your daily life?
Using magic to navigate my daily life. Speaking things into being (chant) writing down an idea and turning it into a reality (spell) creating what I see in my mind with my hands (magic). If I seek the magic it reveals itself during the course of my day.
Lately, I’ve been asking anyone I meet to “dream out loud” for me. People don’t really ask shit like that in social interactions. We all wear a mask in public and in private. I love when people lower their mask because I get an entirely different energy from that interaction. Some people will read this and think I’m a weirdo. Which is cool with me because I definitely am. 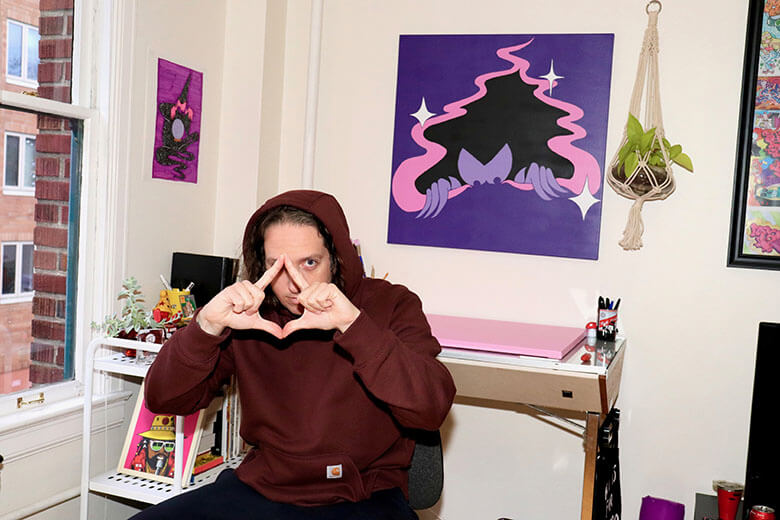 Do you need to be registered with the city or pay a membership fee each year?
No fees necessary. 99% of artists/creatives kick their own ass harder than any other person ever will. So let’s count that as the membership fee. 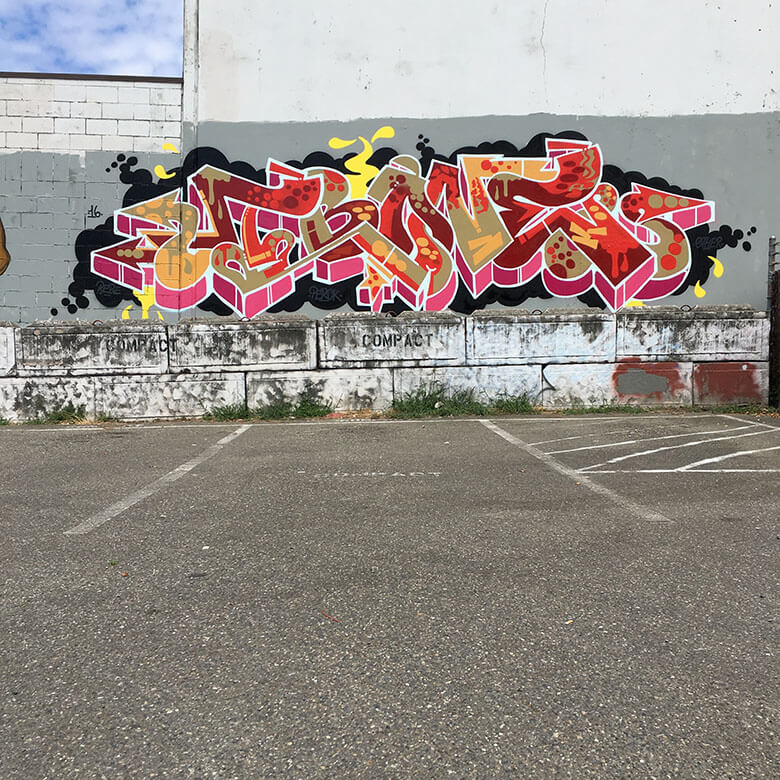 Can wizards recognize each other in the street like writers can?
I’ve learned to stop using my eyes to recognize other wizards. That also sounds like full on bullshit, those that know, know. Wizards are not exclusive to art or any certain skill. We worldwide. We good in any hood. 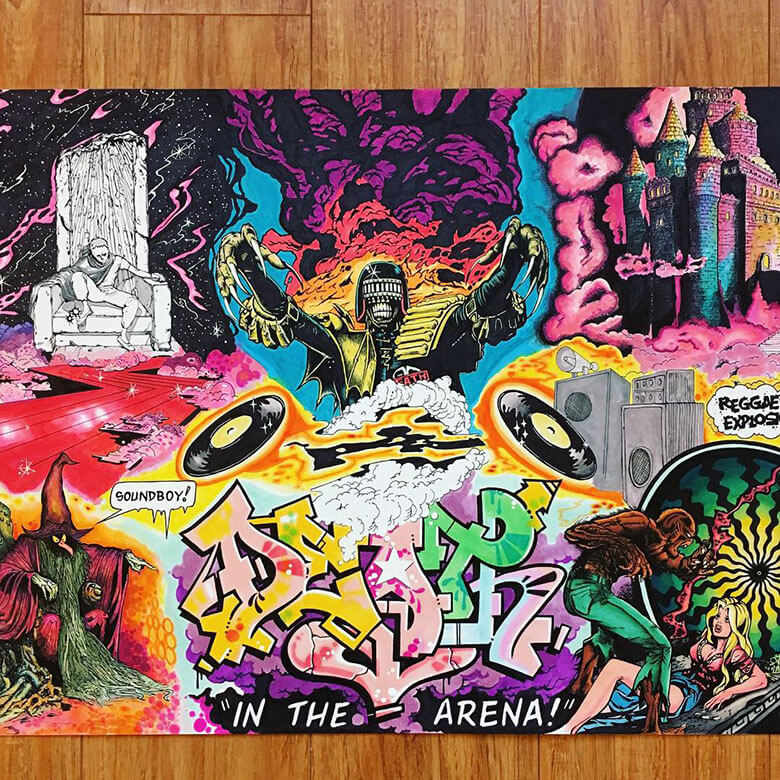 You actually came into the graffiti game quite late, in your 20’s.
A lot of writers don’t know how late I started. It’s not a secret by any means. I’ve painted for almost 20 years so it’s fair for anyone to assume that I must have started at the same age they did. I have been fortunate to paint with many of my heroes and had numerous mentors/partners. 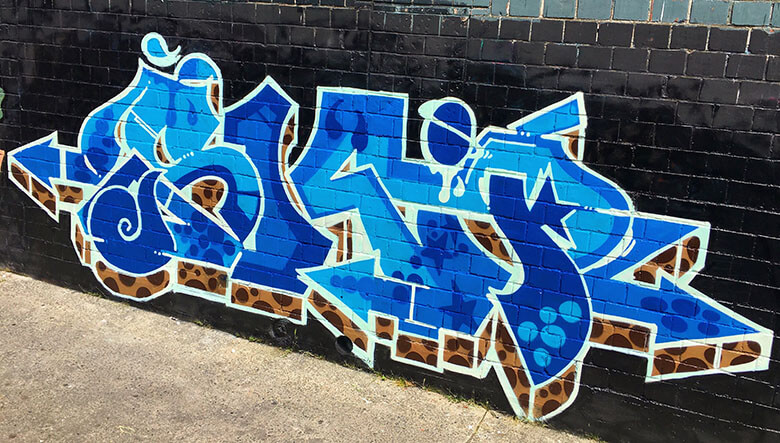 ‘Wizards are not exclusive to art or any certain skill. We worldwide. We good in any hood.’

Maybe more mature writers feel less peer pressure to do stupid stuff and might be more careful. What other advantages do you think you had by starting late?
It gave me zero advantages. Other than being compelled to catch up as fast as possible. It’s one thing to be a toy, it’s a whole other thing to be a toy at age 20. All credit goes to Persue, Menso, Icepick, BC, Vic20,  BC BTM, Enroc, Perck, Twigs, Other, Jurne, Keo and other peers that helped me improve. 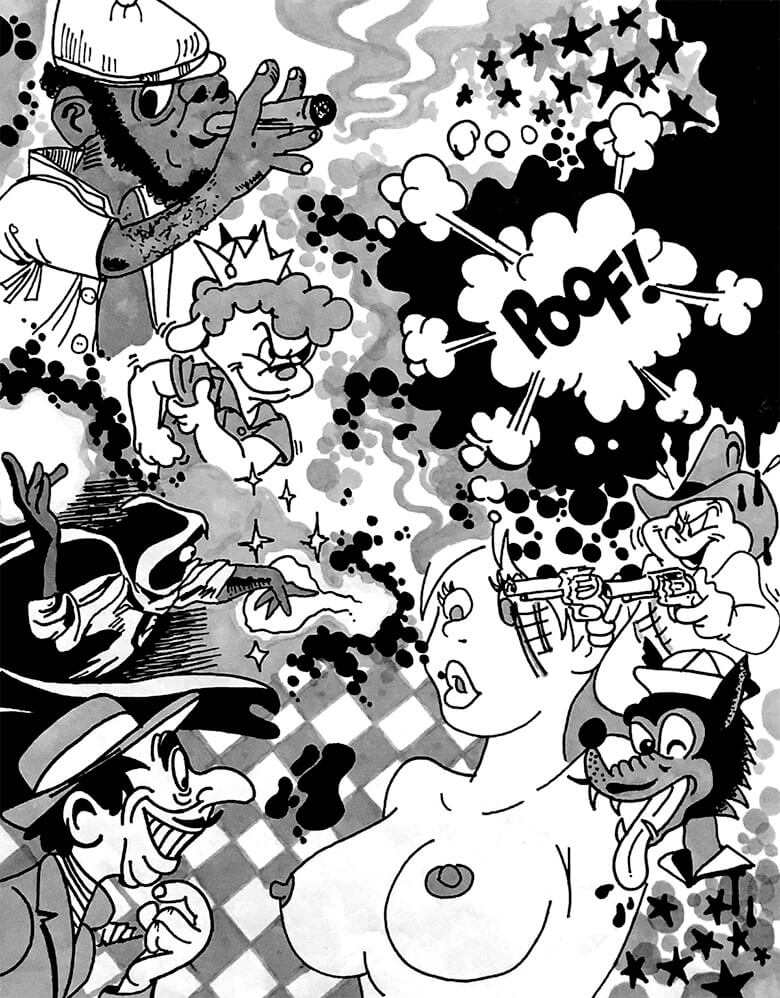 Was the graffiti scene in San Diego a good place to develop? Why?
Early 2000’s was a good time for SD graffiti. I missed the golden years though. Thankfully TVC was still highly active during my time there. As was MDR, DTM, and NR. My entire goal has been to emulate this spot that Pinball and Ronie painted in downtown by the 5 Freeway. It was an illegal production with characters + pieces, the whole shit. SD graffiti by my time was mostly looking like LA “scary style”. I still don’t know the proper name for LA style.
Before the 2000’s SD had its own style that only a few people can speak on with authority and I’m not the one to ask. TVC always pushed funk and was hugely influential to me. 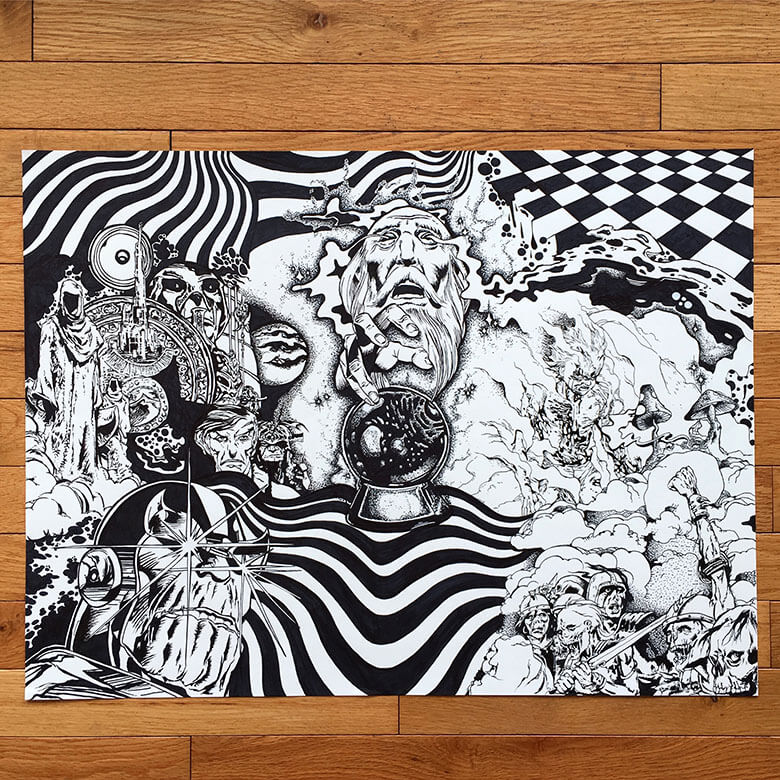 What’s your best memory connected to painting graffiti?
He’s probably gonna hate me for telling this story, I was in The Bay maybe nine years ago. Bunch of us were doing a day production near Market St. Anyone that has painted that wall knows how spicy that area gets. I decide to walk over to Jurne TGE to see how bad he was going to send my stupid little piece into the ether. He turns to me and with 3000% seriousness and says “Yo…you fuck with cheeses?” Me: “Yeah?” Jurne: “I got this cheese spot, roll with me.”
That dude takes me to some artisan ass deli or something and starts perusing various rare cheeses, coming up with illegal pairings, all sorts of lavish fromage situations. My dude will blind side me with the funniest shit like that and then paint a holographic gradient fade burner while DJing off the iPhone.
Second favorite story was during a jam in Seattle. I didn’t know I had been walking past Bates the whole ass day. I suddenly realized it was in fact Bates and yelled “Oh shit, that’s fucking Bates!” Every writer instantly stared at me like I was the biggest toy of all time. I was dehydrated and regret nothing. He seemed nice enough. 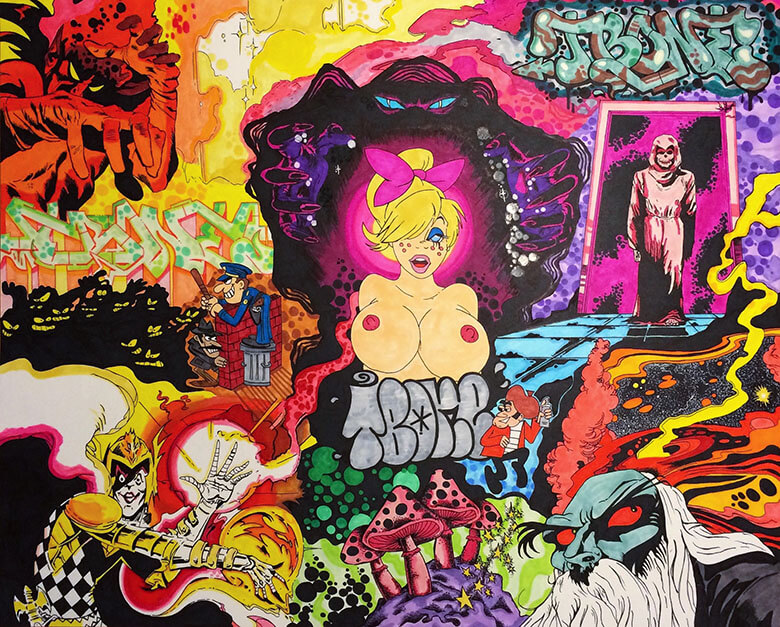 Your pieces seem to be a development of Ghost RIS in a way, which explains the loose letters and psychedelic color schemes. Would you agree? Do you have a name for that style?
I wouldn’t put myself and Ghost in the same sentence, ever. I make no effort to hide my style influences. TFP, RIS, CIA, all that stuff. I prefer to classify it as funk. Keo X-Men has been a friend/collaborator for nearly a decade and he helps fill in the gaps about where all that stuff comes from. Wane COD is really amazing at history lessons as well.
As far style, it easier to say we all are sons of sons. Most style, (in my opinion) had been perfected or created by ’79. Stars, bubbles, bits, doo dads, characters, tree-d, whole cars, end to ends, funk, clouds, etc. 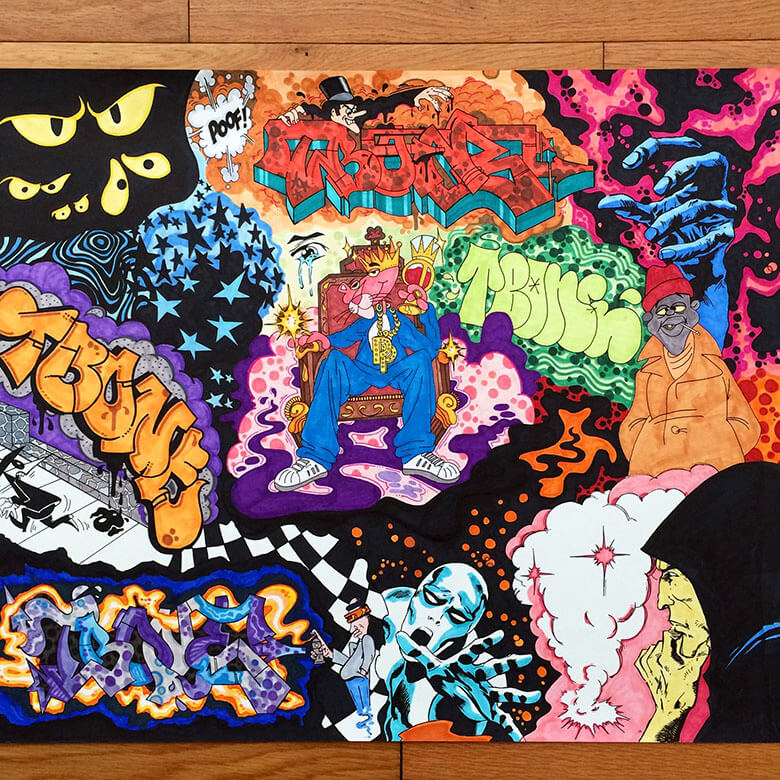 ‘As far style, it easier to say we all are sons of sons. Most style, (in my opinion) had been perfected or created by ’79.’

You’ve worked as an illustrator as well as a whole range of other pursuits like curator, social media manager, consultant and whatnot. Which job taught you the most solid life skills?
That’s hard to pin point. I wouldn’t say any of those roles gave me major life lessons. Career wise, being able to write well has been the skill that keeps me employable. Don’t let IG fool you. I’ve bar backed, painted houses, worked retail, all that shit. While learning to become an illustrator.
I never set out to be a writer or a copywriter. At age 30 I took copywriting courses in Seattle. My teacher Mike, was like “you already been doing all this agency level creative shit for years.” And with what he taught me I just walked into a big ad agency and got hired. 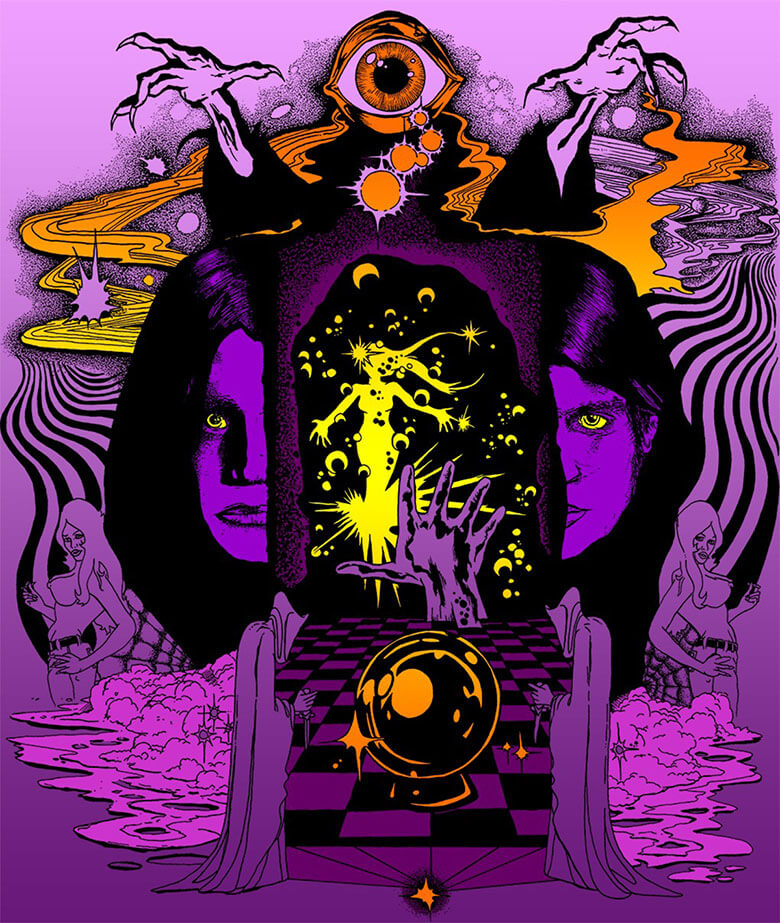 Your first post as @skip.class goes back in time to 2018, featuring a depiction of a mysterious cloaked figure performing a spell. Who is the character? Where did he/she come from?
My first IG was hacked and deleted. Shit happens. I also will wipe it every few years and start at zero.
That character is from the series of wizards I’ve been doing for years that I call Hokus Smokus. I’m still fleshing out the story for that world. And none of them have names, but I’ll get there.

Since then the drawings that you’ve shared is what sets you apart as a wizard graffiti writer, taking on many familiar characters from the 80s. Who are your all time favourite illustrators and/or cartoons?
I could write a list of 100’s but comic book wise, Kirby is God, Jon Buscema, Mike Ploog (y’all need to give dude his roses) Frazetta, Moebius, Druillet, Cartoons, all Bakshi, He-Man, The Black Cauldron, Akira, Ghost In The Shell, Ninja Scroll, Flight Of The Dragons, Regular Show, Ren and Stimpy.
Anyone under the Heavy Metal Magazine umbrella is a go. Anyone from 2000 A.D. 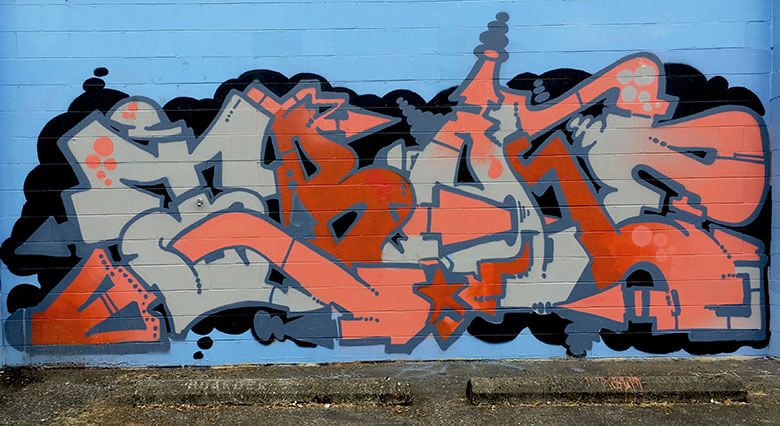 You also have a Soundcloud which features a lot of rap. Can you explain the origin of these mixtapes?
I’ve been an audiophile since birth. First tape I ever bought was Bushwick Bill at age 10? I got sent to military school my sophomore year because I was taking mescaline and acid at school and smoking weed daily. Wouldn’t recommend that diet.
While at military school the only thing I could do was go to record stores. Started burning CDs and making mixes. Never stopped. I pulled my Soundcloud down because they started reporting certain songs. I’ve made mixes with IMNOTATOY, The Kid Mero, Fader Magazine, Kevin Lyons, Project Pat, Sizzla, Mikey Dread. Going to keep making them. I’ll put them all up on some streaming platform once I figure that out. 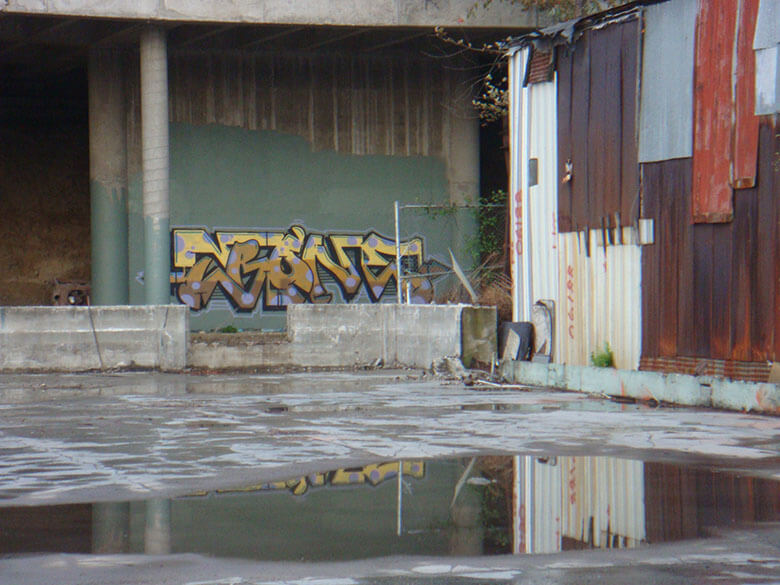 This interview forms part of a special month of content focusing on everything influenced by fantasy, sci-fi and horror in the world of graffiti. Check out more incredible art by using the hashtag #mtnfantasymonth on social media.